CHRISTOPHER STEVENS: Agatha Christie and the mystery of a thriller that hasn’t got a clue

CHRISTOPHER STEVENS reviews last night’s TV: Agatha Christie and the mystery of a thriller that hasn’t got a clue

Agatha And The Midnight Murders

Boris doesn’t need wind turbines for his green revolution. He could just harness the energy of Dame Agatha Christie, spinning in her grave like a diamond drill bit.

The Queen of Crime and her legacy were thoroughly traduced in Agatha And The Midnight Murders (C5). Helen Baxendale played the novelist as a devious, callous double-crosser willing to stitch up her publishers and kill off Hercule Poirot to evade bankruptcy.

When her bodyguard Travis (Blake Harrison), a small-time crook, tried to swipe her manuscript for himself, she calmly dosed him with poisoned whisky and watched him die. 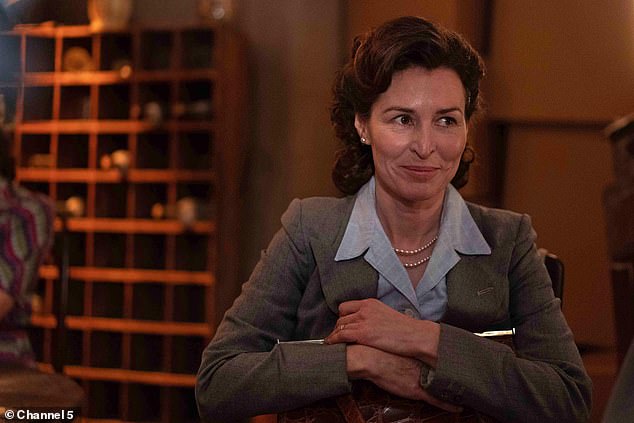 Helen Baxendale played Agatha Christie as a devious, callous double-crosser willing to stitch up her publishers

The two-hour drama set during the Blitz ended with a disclaimer: ‘This film has not been endorsed, licensed or authorised by the estate of Agatha Christie.’ You don’t say!

From the first scene, it was sickeningly off-key. In the aftermath of an air raid, an ARP warden in a gas mask stalked the rubble with a knife, to slice the fingers off victims and steal their jewellery.

What was this, a remake of Psycho with Mr Hodges from Dad’s Army as Norman Bates? Then the opening credits rolled and we never saw the gruesome looter again.

Instead, Travis and Agatha strolled into the bar of a glamorous London hotel, sparsely populated with sub-Cluedo characters. Then a policewoman turned up. She pulled a revolver and locked everyone in the cellar for the duration of an air raid.

There was a Chinese gangster (first to die), a stuttering waiter (second to die), an Italian black marketeer (third to die), a mysterious femme fatale (fourth to die), two lady tourists who turned out to be secret agents, and a fearless war hero with his dim blonde girlfriend.

Who else . . . oh yes, the Chinese gangster had his own bodyguard, a thug from Malta (seriously, Malta). His name was Rocco, and the actor who played him (Morgan Watkins) had to invent an accent that sounded half-Spanish, half-Russian. Well, can you do a Maltese accent?

Dull viewing of the week:

Scottish detectives hunting a killer in Murder Case (BBC2) had to slog through 500 hours of CCTV footage to spot their suspect. Think of that, next time you flick through 30 channels and find there’s nothing on.

As the body count mounted and someone stole her precious manuscript, Agatha turned sleuth.

Oddly, she failed to realise that the Metropolitan Police weren’t meant to carry guns, nor that the Italian spiv ought to have been in jail, since this was 1940 and we were at war with his country.

But she did spot a smear of blood on her bodyguard’s forefinger, which tipped her off to the fact that he was the killer.

She waited until he’d shot the policewoman before she revealed what she knew, though. There’s no point in rushing these things.

It was all confined to three cramped sets, with the cast as posed and static as a third-rate am-dram production. The dialogue was crammed with foul language.

No historical fact was left unmangled. Even the dresses looked hopelessly wrong, early 1930s instead of wartime.

But I’m letting the show off lightly. The real savagings of the night were being handed out by Sean, the head butler in The Savoy (ITV). Sean, a little bald Irishman whose devotion to the five-star hotel is beyond fanatical, constantly fizzes with fury. Veins throb in his eyeballs when he discovers a room service trolley with a wonky wheel or spots a badly folded serviette.

He’s like a leprechaun stuffed with chilli peppers, ready to erupt at any moment.

I dread to think of his reaction if anyone dared to point out that all he and his butlers provide is glorified room service.

Meanwhile, in the hotel bar, they’re selling cocktails for £25 with names borrowed from songs. One is called Something Stupid. You’d have to be, to pay that for a drink.