CHRISTOPHER STEVENS: Saintly Sister J infected by the spirit of The Traitors? Surely not!

CHRISTOPHER STEVENS reviews the Christmas TV: Saintly Sister J infected by the spirit of The Traitors? Surely not!

By Christopher Stevens For The Daily Mail

Ban the bicycle! For the sake of all nuns and nurses, these two-wheeled menaces must be outlawed from the streets of the East End.

Sister Frances (Ella Bruccoleri) departed Call The Midwife (BBC1) in the grimly traditional fashion when she took a tumble from her velocipede on a snowy street.

Fortunately, this pedalling angel of mercy wasn’t too badly hurt — just a shattered clavicle and a fractured humerus, in the unflinching medical terminology of the show.

But it was nasty enough to have her sent to Chichester… the fate that awaits so many nuns when they leave Nonnatus House. Sister Hilda (Fenella Woolgar) had already gone there, despatched without warning at the start of the episode.

Ban the bicycle! For the sake of all nuns and nurses, these two-wheeled menaces must be outlawed from the streets of the East End

Regular viewers (and that means most of us, because we haven’t exactly been spoilt for choice, the past few Christmases) will remember how poor Sister Mary Cynthia (Bryony Hannah) was enjoying a dawn bicycle ride by the docks when a maniac attacked her.

She was sent to Chichester to recover. And, in 2017, Nurse Delia (Kate Lamb) was hit by a car while cycling, causing her to forget everything… including her girlfriend Nurse Patsy.

Snow globe of the weekend

Nish Kumar introduced the second half of Celebrity Lego Masters At Christmas (C4) from inside a plastic dome filled with snowflakes. Instead of being festive, it just looked like he was trapped in a giant jellyfish.

Nurse Trixie (Helen George) avoided any such disasters by ensuring she was chauffeured everywhere in her lovestruck suitor’s Jaguar. To cement her affections, super-rich Matthew (Olly Rix) went around acquiring dolls’ houses for Poplar’s poorest children, before buying Trixie a colossal diamond engagement ring — and then chucking it in the Thames, to prove he loved her more than money.

The Christmas storyline revolved around a homeless woman who tried to have her baby in Fred Buckle’s potting shed. Luckily, Nurse Crane (Linda Bassett) and her spinster chum Miss Higgins (Geordie Glen) discovered her, or we might all be singing: ‘Away in the allotment, with Fred’s wheelbarrow for his bed.’

All of this was no more than we expect, a sort of Midwife-by-numbers, and the community talent contest — punningly named Poplartunity Knocks — delivered no surprises either.

The one moment of intrigue came when Sister Julienne (Jenny Agutter) seemed about to sabotage Trixie’s romance by hinting to Matthew about dark secrets in the past. Saintly Sister J, infected by the spirit of The Traitors? Surely not! And of course, she wasn’t being spiteful — she just wanted Lover Boy to know that his future bride might prefer to choose her own jewellery. 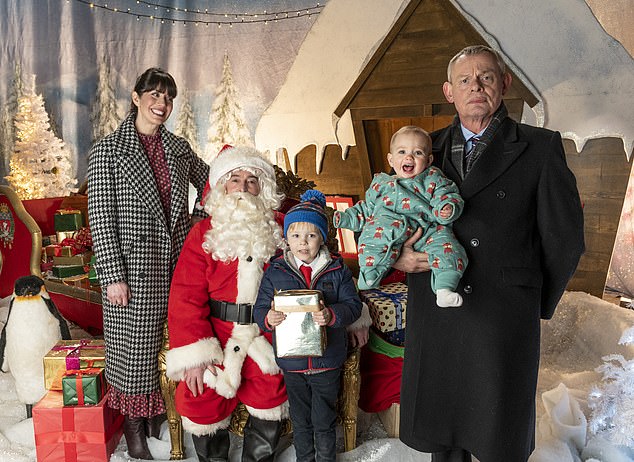 This was meant to be the climax to the final series of Doc Martin, and Clunes has enriched his performance by allowing the curmudgeonly Cornish GP to show a wider range of emotions

All in all, it was hardly a memorable edition of a show that’s been running for a decade. But Doc Martin (ITV) has been going much longer, since 2004, and the Christmas special managed to be full of shocks and twists. The ghost of Christmas past visited Dr Ellingham (Martin Clunes) — the apparition of his sour-hearted mother, as he sat freezing to death after crashing his car in a blizzard. Being entirely rational and unsentimental, he refused to believe in her existence. But that didn’t stop her from saying some pretty mean things.

This was meant to be the climax to the final series of Doc Martin, and Clunes has enriched his performance by allowing the curmudgeonly Cornish GP to show a wider range of emotions.

He might not understand what he’s feeling, but he knows he is feeling it — and he was even able to tell wife Louisa at the end that he loved her, with enough conviction that she knew he meant it.

This was billed as the last-ever Doc Martin — but they said that about the previous episode too. The doctor didn’t die from hypothermia, or move away from Portwenn. He didn’t even retire.

Everything is in place for the show’s return. That’s the present I want next Christmas.