Captain Tom personifies a sort of ideal Britishness. As the historian and Daily Mail sage Dominic Sandbrook says: ‘He’s like the secular version of the Queen.’

On the evidence of The Life & Times Of Captain Sir Tom (ITV), the centenarian who raised tens of millions for NHS charities during lockdown is indeed like Her Majesty — but with a wicked sense of Carry On humour.

Studying a photograph of himself as a young second lieutenant in World War II, when he served in India and the Far East, he declared: ‘I don’t look like that now — but I did. I managed to get by with some of the girls all right.’ 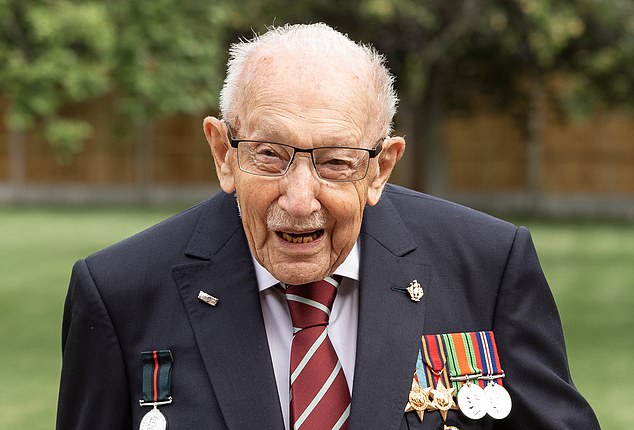 If positive thinking is the secret to his long life, he’ll see us all out. Every tale had an upbeat twist

Then he told an impish story of how he would work his wartime leave to coincide with visits to a sweetheart in Bombay named Sylvia.

That charming optimism and good humour pervaded the documentary, recorded during a day of conversation with the indefatigably chatty Captain (now an honorary Colonel).

He lives by his motto: ‘We’ve got so many people who think: ‘Oh, it’s terrible,’ but it isn’t. Things are going to get better, they really are.’ 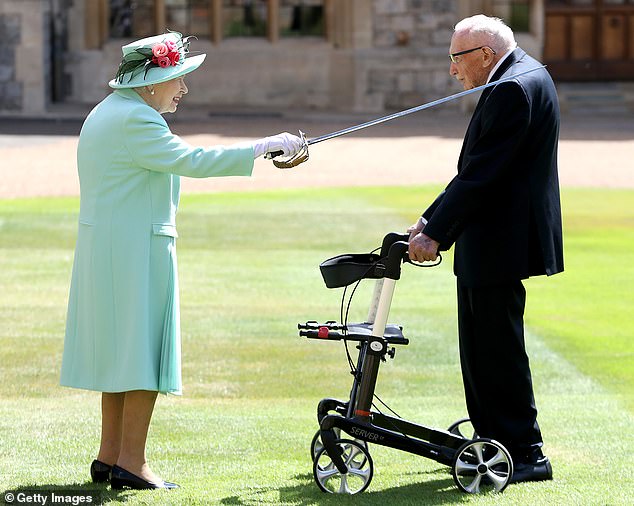 As the historian and Daily Mail sage Dominic Sandbrook says: ‘He’s like the secular version of the Queen.’ Captain Sir Thomas Moore is pictured being knighted by the Queen last month

If positive thinking is the secret to his long life, he’ll see us all out. Every tale had an upbeat twist.

When he was making his way as a salesman in the building trade after the war, he used to race along the empty roads in his company car.

‘I was only picked up for speeding twice. I should have been picked up hundreds of times!’

But there’s little saccharine about his sense of humour. Remembering his proposal, aged 48, to Pamela, the office manager who was 15 years his junior, he snorted: ‘There was no going down on one knee or anything like that.’

Her family didn’t approve of him, he said, because of his Yorkshire accent. Pamela looked at him and thought: ‘Anything’s better than nothing!’ he chortled.

Then, with a Sid James twinkle, he hoped that no one counted the number of months between their marriage and the birth of their first child.

‘Some would have disapproved. But what did I care?’

As the whole country knows, Captain Tom is a tonic. Fans inundated him with gifts, from paintings to motorbikes, after his £32 million charity heroics. 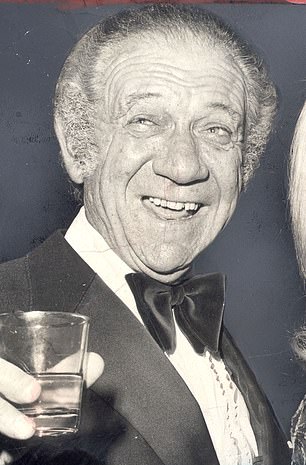 With a Sid James twinkle, he hoped that no one counted the number of months between their marriage and the birth of their first child. Sid James is pictured above

‘Can you imagine £32million in a big pile, what it would look like? Didn’t come to me, unfortunately!’

The Captain cannot fail to leave us smiling.

BBC2’s comedy evening is a more hit-and-miss affair, but it’s good that the Beeb is now producing enough new sitcoms and sketch shows — after a long barren patch — to stage a cavalcade like this.

Diane Morgan’s slack-faced creation Mandy (BBC2) kicked it off with a couple of daft stories — one about a job at a banana factory, and one that pitted her in a line-dancing marathon contest against arch-enemy Maxine Peake.

Call me easily pleased, but I was weeping with laughter at the sight of a woman with a beehive and a fag in her mouth, splatting tarantulas on a conveyor belt of imported fruit.

I’m laughing less at Semi-Detached (BBC2). It started well but I’m beginning to worry that Lee Mack — shorn of his one-liners — is a painfully depleted sight. He needs to be much more than just a character that things happen to.

Matt Berry rounded the evening off with Squeamish About . . . (BBC2). It was funny for the first five minutes. Less would be more.

Crime pay-off of the week: Good news for fans of Jason Watkins. ITV has booked a second series of McDonald And Dodds, which sees him as the mild-mannered police sergeant working for a fast-tracked star detective (Tala Gouveia). Murder returns to Jane Austen-land.