In cities, towns and villages across Britain, millions of Britons are looking forward to Christmas.

Despite the cost-of-living crisis and the chaos caused by strikes, families will rejoice in being together again after two years where the festivities were hampered by coronavirus.

But in the Holy Land, in the cities of Jerusalem and Bethlehem where the ‘story’ of Christianity began 2,000 years ago, local Christians are calling for help as their numbers continue to dwindle and they face discrimination and economic hardship.

In 1948, Jerusalem’s 31,000 Christians represented around 20 per cent of the population. Now they number just 10,000 – less than two per cent, and numbers are continuing to fall.

Tn the Holy Land this Christmas, in the cities of Jerusalem and Bethlehem where the ‘story’ of Christianity began 2,000 years ago, local Christians are calling for help as their numbers continue to dwindle and they face discrimination and economic hardship. Above: The Church of the Holy Sepulchre – built on the reputed site of Jesus’s tomb – in April 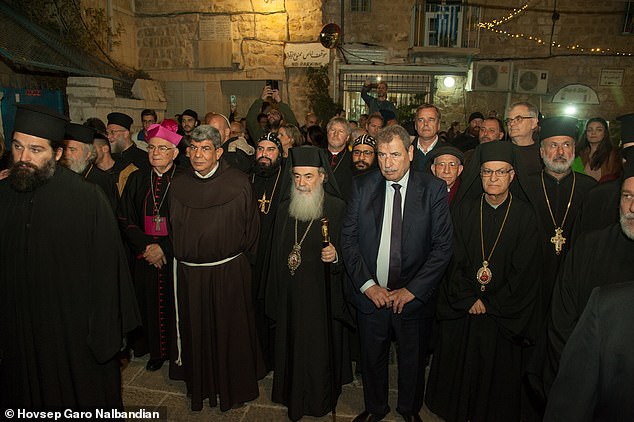 In a hugely symbolic move, the current Patriarch of Jerusalem (pictured centre with other church leaders), Theophilos III, came to the Imperial last Saturday to turn on the lights of a Christmas tree installed on the property’s balcony

Clergy have been spat at as they lead processions to the sacred Church of the Holy Sepulchre – built on the reputed site of Jesus’s tomb – and other churches have been attacked by arsonists.

And radical settlers have led incursions in the Christian quarter, typified most recently by the takeover of the Little Petra guesthouse, which was ‘illegally’ occupied in April and is in the process of being renovated and stripped of all signs of its former usage.

Tourists who come to Jerusalem see few signs of the challenges faced by local Christians.

All of the key sights are there to see, such as the reputed location of the Last Supper on Mount Zion, and the Via Dolorosa – the path that Christ is believed to have taken to his crucifixion.

And in the Holy Sepulchre this month, there are thousands of pilgrims and tourists queuing as Christmas Day approaches to see Jesus’s tomb and to climb the steps to what was once the Hill of Golgotha – where Christ was crucified.

But signs of tension are everywhere.

On Mount Zion, a Greek Orthodox chapel that some Christians believe was used by Jesus’s earliest followers needs to be protected by bars and fencing and has been repeatedly targeted by vandals.

In June, it was broken into by members of a radical group, who allegedly told a security guard: ‘We know where you live and we will kill you.’

In May last year, two Armenian priests were attacked by a group of men, leading to one of them being hospitalised.

In November, priests in the Armenian church were allegedly spat at by Israeli soldiers.

And last year, a sack of rubble was tossed over a wall into a courtyard where outdoor seating was arranged. Fortunately, no one was sitting there at the time.

The takeover of the Little Petra hotel, which lies just yards from Jaffa Gate – the historic entry to the Christian quarter – has been the subject of a high-stakes legal battle between settler group Ateret Cohanim and the Greek Orthodox Church. 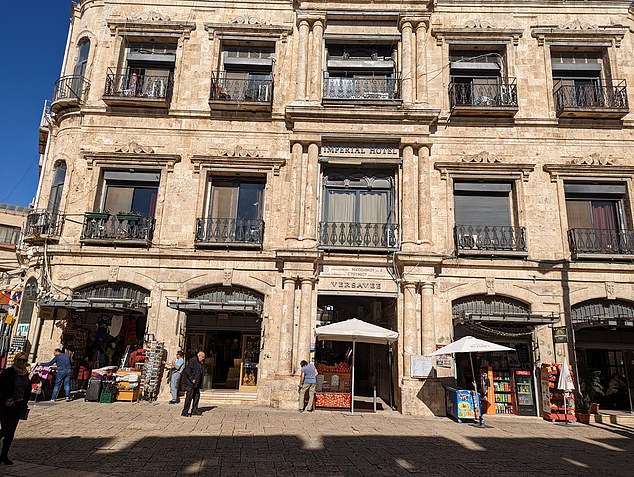 The historic Imperial Hotel is seen this month. It was from a balcony in the property that Britain’s General Allenby gave a victory address after the Battle of Jerusalem in December 1917 during the First World War 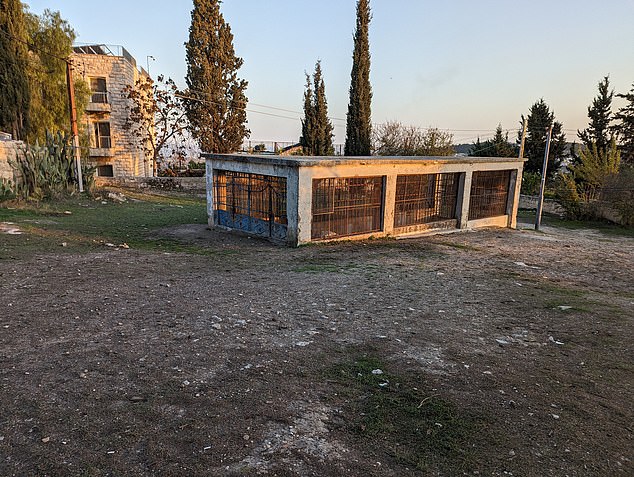 On Mount Zion, a Greek Orthodox chapel (exterior pictured) that some Christians believe was used by Jesus’s earliest followers needs to be protected by bars and fencing and has been repeatedly targeted by vandals 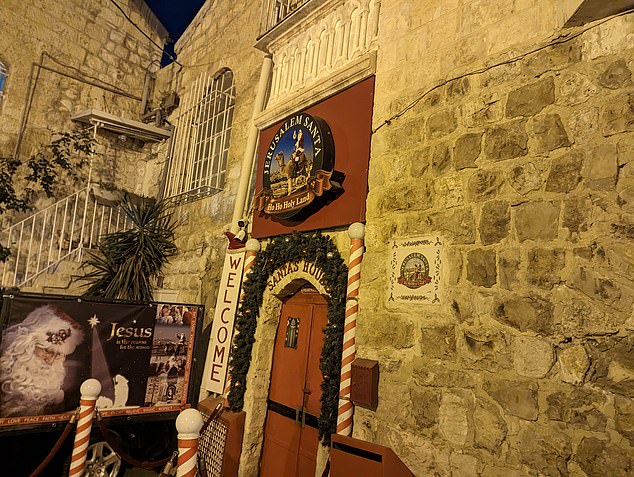 On Mount Zion, a Greek Orthodox chapel that some Christians believe was used by Jesus’s earliest followers needs to be protected by bars and fencing and has been repeatedly targeted by vandals

This Jerusalem property boasts of being ‘Santa’s House’ and bears the tagline: ‘Ho Ho Holy Land’ 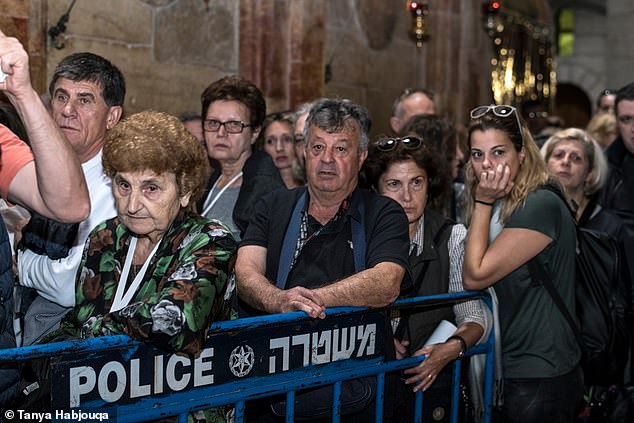 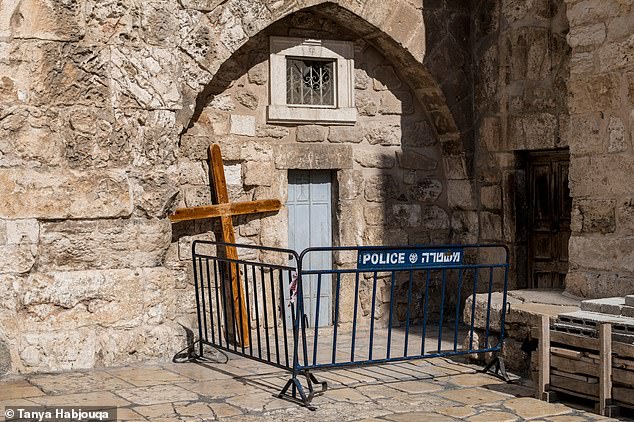 The Little Petra was among a portfolio of church properties sold to Ateret Cohanim in 2004 after a murky deal agreed under the former Greek Patriarch Emmanouil Skopelitis, who was dismissed in 2005.

A church financial manager blamed for his part in the deal has since fled to South America.

In early December, videos captured the removal of furniture from the Little Petra. Structural changes were also being made to the building in December.

A settler who was outside the Little Petra did not wish to speak about the changes being made to the building when approached by MailOnline.

Another of the properties sold to Ateret Cohanim was the historic Imperial Hotel.

It was from a balcony in the property that Britain’s General Allenby gave a victory address after the Battle of Jerusalem in December 1917 during the First World War.

In a hugely symbolic move, the current Patriarch of Jerusalem, Theophilos III, came to the Imperial last Saturday to turn on the lights of a Christmas tree installed on the property’s balcony.

The Imperial is still controlled by its protected tenant, hotelier Walid Dajani, whose family have been prominent in Jerusalem for more than 700 years.

But he has been under intense financial and legal pressure to hand the keys over.

Although he has been served an eviction notice, Mr Dajani is insistent that the deal his father secured with the Greek Orthodox Church in 1949 for his family to run the Imperial for three generations remains valid.

Speaking to MailOnline, he called on religious leaders in Jerusalem to close the Holy Sepulchre and other churches in the hope it might prompt the city’s authorities and even world leaders to help secure the return of the Imperial.

‘And that’s why they did not move in, because I have the contract that goes for another two generations.

‘It’s only through court, they cannot come in like this. They have to go to court.’

He added: ‘We have been here as a family for the last 700 years. We will never give up.’ 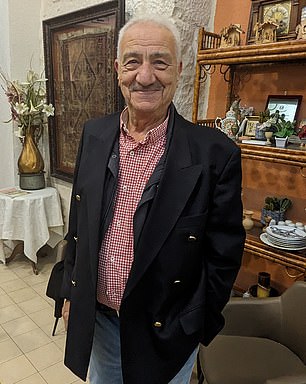 The Imperial is still controlled by its protected tenant, hotelier Walid Dajani, whose family have been prominent in Jerusalem for more than 700 years

Mati Dan, the chairman of Ateret Cohanim, lives in another former church building, St John’s Hospice, where now Israeli flags hang on each side of the double doors

Beneath the Imperial Hotel is Versavee, a popular restaurant run by Palestinian Christian Gabi Hani.

Mr Hani, who is married and has three sons, was born and brought up in Jerusalem.

He took over what was a deserted venue in 2007 and has turned it in to a popular place to eat in Jerusalem.

‘We need your help,’ he says. ‘We cry for all Christians to help us and help the people who need us.

‘We are sitting here on high voltage of electricity

‘We just need your help with the churches in England and everywhere, Wales and Scotland to realise you know, Palestinians are not only Arab Muslims

‘You know, because I think this is what the Europeans don’t know. And when they know they’re surprised that we are here. Yes, we are here. We’ve been here always.’

He says radical Jewish groups have chosen the Imperial and Little Petra because they are ‘very central’.

Controlling them will mean they have a firm foothold in the heart of the Christian quarter of Jerusalem.

Mr Seidemann, who specialises in Israeli-Palestinian relations in Israel, says the issue of the Imperial and Little Petra hotels has become something of a ‘political hot potato’.

‘It fits into the cobweb of a general policy, which is to surround and penetrate the Old City, with settlements and settler related activities.’

‘The Christian community is composed of Palestinian Christians and people from abroad who come to Jerusalem to participate in a Christian community living with children, schools, with all the wealth – I’m talking about human wealth not material wealth, of the community,’ he says.

‘That will shrink and what will remain are the cloisters.

‘You know, you will be able to visit holy sites. There will be priests at the holy sites, but there won’t be the community around that makes Jeruslaem so unique to the Christian world.’ 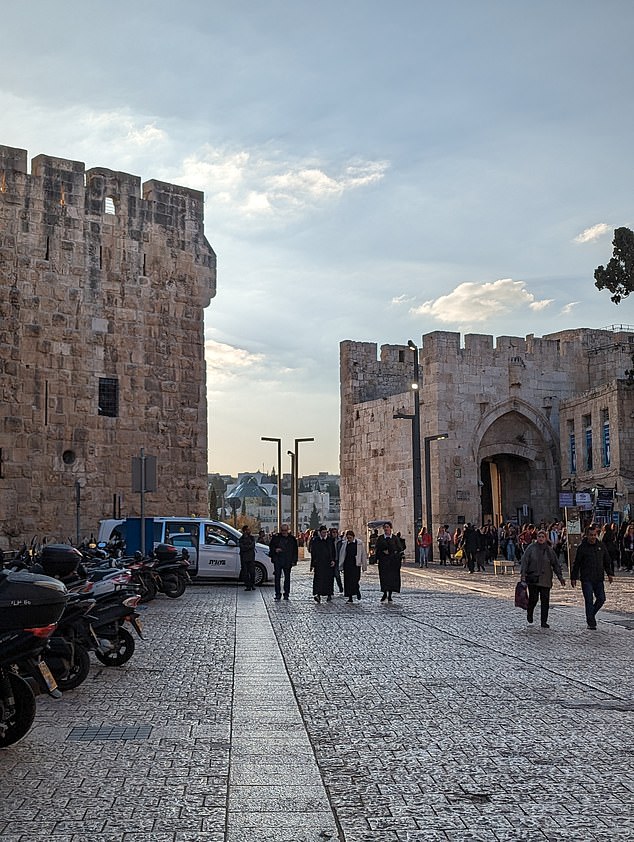 The historic Jaffa Gate, the traditional entrance to Jerusalem’s Christian quarter, is seen above

He adds: ‘I would say the threat is that not that Christianity will disappear from the Holy Land, but it will turn into a museum piece.’

Meanwhile, campaigners fear that a controversial plan to expand an Israeli national park onto church-owned land that includes a section of the historic Mount of Olives may get the go-ahead after being paused earlier this year.

However, despite the pressure that Christians are facing, Archbishop Naoum remains relentlessly hopeful.

‘We as Christians, you know, I say, brother that we are hopeful. We are hopeful because we are people who believe in hope,’ he said.

‘That’s our faith. And inspired by the wonderful image that we have here in Jerusalem, the empty tomb, and the Church of the resurrection, I believe that image continues to be a source of inspiration to us that life and peace and light have the final word rather than death, alienation or suffering.’

Ateret Cohanim did not respond to a request for comment when approached by MailOnline.  However, the organisation insists that it operates legitimately.

For more information go to www.protectingholylandchristians.org.