Roy Griffiths, a deputy head teacher at Lincoln Cathedral School, was accused of indecently assaulting a pupil in 1969, but went to keep his job until 1970 when another boy made abuse claims against him

Church of England leaders allegedly ‘turned a blind eye’ to child abuse claims against a teacher who was allowed to move to an Anglican school in Papua New Guinea despite facing child sex assault claims, an investigation has revealed.

Roy Griffiths, a deputy head teacher at Lincoln Cathedral School, was accused of indecently assaulting a pupil in 1969, but remained employed until 1970 when another boy made abuse claims against him.

He stayed at the school for at least two further months and was able to move to a job at an Anglican school in Papua New Guinea. The late Rt Revd Kenneth Riches, former Bishop of Lincoln, knew about the case from the first complaint.

Neither Lincoln Cathedral School nor Lincoln Diocese informed the police at the time and they only heard 45 years later, BBC Panorama found.

One of Roy Griffiths’ victims, who now lives in Canada, told Panorama: ‘It should have been dealt with right away, and the Church should have instructed the police… and they didn’t. They just turned a blind eye and moved on.’

Lincolnshire Police and Lincoln Diocese investigated 25 people over alleged abuse, from a list of 53 names which were passed to officers, with three cases leading to convictions.

The BBC said some of the names could have been referred years earlier as part of the Church of England’s national Past Cases Review, which examined tens of thousands of church records in 2008 and 2009 to discover whether abuse cases had slipped through the net. 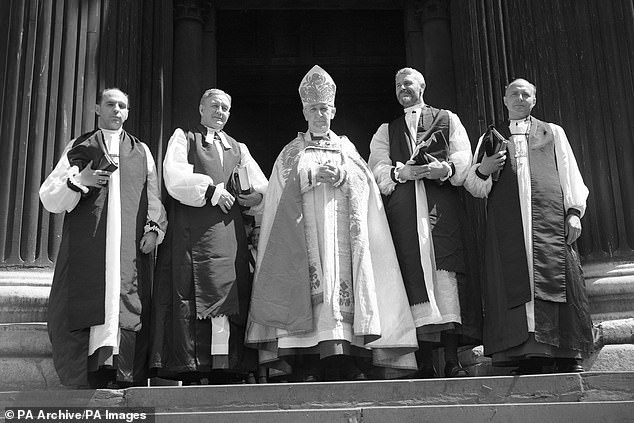 The late Rt Revd Kenneth Riches, former Bishop of Lincoln, knew about the case from the first complaint. He is seen on the far right of this undated photo. None of the other people pictured are relevant to the Panorama investigation

Not all of the names on the list related to child abuse allegations.

Detective Superintendent Rick Hatton, who leads the ongoing investigation, named Operation Redstone, told a Panorama programme being broadcast at 8.30pm tonight: ‘We whittled it down to about 25 names whereby we either knew that they’d committed offences or there was some issue around risk to members of the public from them.

‘There was the ongoing concern that actually those people were working with children. Potentially there was still a risk.

‘Just because they are what we call non-recent cases, doesn’t make them any less serious.

‘In fact it makes them more serious because they weren’t dealt with at the time, so there’s a risk from the offender ongoing.’

The programme will claim two former Lincoln Diocese bishops were made aware of abuse concerns at the time, but failed to act.

Panorama will also claim the former Bishop of Lincoln, Rt Revd Robert Hardy, was informed that his director of education had ‘touched up’ a female, but that it was a one-off incident.

The bishop did not contact the woman or her family to discover more, and John Bailey was allowed to continue working at the diocese for another six years.

In an interview, one of Bailey’s victims said he had become friends with her family.

She told Panorama: ‘He would take the opportunity to come upstairs when I was in bed if they were playing cards downstairs and he would touch me under my clothes while I was in bed between my legs.

‘It went on from when I was four ’til when I was 11. And it happened quite frequently.’

In 2017, Bailey admitted abusing three girls and was sentenced to six years in prison.

Bishop Hardy told Panorama no-one had contacted him to make a comment or complaint about John Bailey, and if they had done, he would have investigated it. 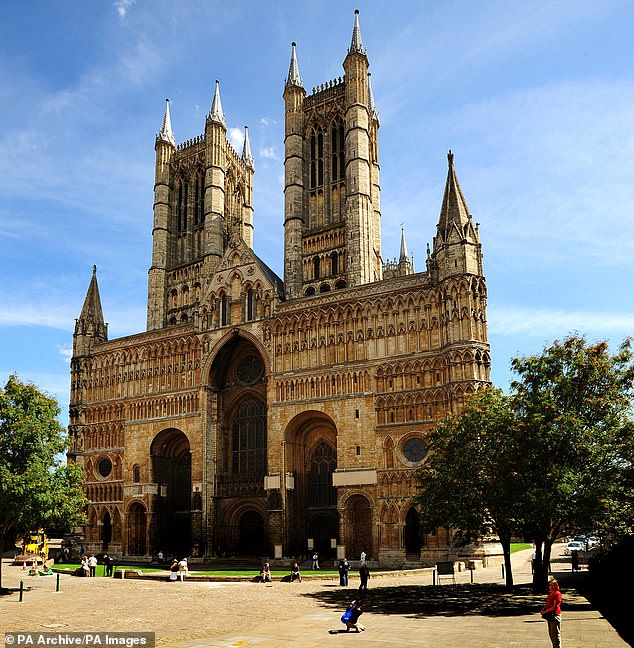 Lincolnshire Police and Lincoln Diocese investigated 25 people over alleged abuse, from a list of 53 names which were passed to officers, with three cases leading to convictions

He also said that when Bailey was appointed director of education there was no indication of misdemeanour in his past.

‘The diocese is committed to learn from its mistakes. I am very sorry that it took so long for justice to be served.

‘Our safeguarding team have developed an effective partnership with Lincolnshire Police, working together on Operation Redstone.

‘Together they have worked tirelessly to ensure that convictions were secured where possible and where this was not an option, that risk was managed appropriately.’

He added: ‘Every effort is being made to ensure that safeguarding is part of the DNA of the Diocese of Lincoln.’

BBC Panorama: Scandal In The Church Of England is on BBC1 at 8.30pm tonight.