Church of England vicar ‘is on the run after fleeing India’

A Church of England vicar given a three-year prison sentence for sexually assaulting a 15-year-old boy in India was missing last night.

The Reverend Jonathan Robinson – an acquaintance of former Archbishop of Canterbury Rowan Williams – was sentenced by a court in India earlier this month.

Robinson, 75, who was convicted of abusing the teenager after a seven-year police investigation, had been released on bail pending a possible appeal.

But last night it emerged that he had failed to report to a police station on Tuesday and is now believed to have left India.

The father of three is understood to have boarded an Etihad flight this week from Chennai to London.

Last night there was no sign of either Robinson or his wife Christine at their £400,000 home in Martock, Somerset, and the couple were thought to be in the Home Counties.

At one stage during lengthy court proceedings in India, a judge discussed whether the vicar might be castrated.

In the High Court in Chennai, formerly Madras, Mr Justice N Kirubakaran said: ‘This court is sure that additional punishment of castration of child rapists would fetch magical results in preventing and containing child abuses.’

But he added that there would be a ‘hue and cry’ from human rights activists if castration was confirmed.

Another Indian court heard how Robinson molested his victim on two occasions in cheap YMCA hotels before attempting to have sex during attacks in April 2011.

It happened when the pair were on an ‘educational’ trip to the Indian capital, Delhi, involving a children’s home and charity.

The youngster had been taken from the home in Vallioor, in Tamil Nadu state, southern India, which was financed by the Grail Trust, where Robinson was a director at the time.

The teenager later alerted local welfare officials about his ordeal. They helped him file a criminal complaint to police and a warrant was issued for Robinson’s arrest. 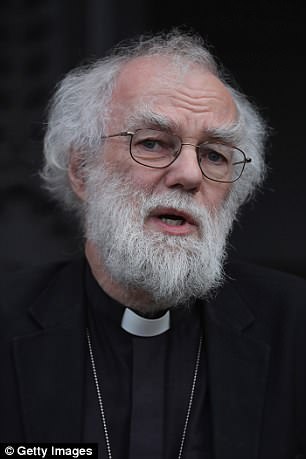 Former Archbishop of Canterbury Rowan Williams, an acquaintance of The Reverend Jonathan Robinson

He initially denied the sex attacks took place. Under pressure he flew to India and handed himself into the authorities in November 2015 after four years on Interpol’s wanted list.

At his trial in Vallioor, Robinson was convicted of attempting to commit unnatural sexual intercourse and wrongful confinement.

He had quit his post as a director of the trust in the wake of the scandal.

Robinson has strong links to former Archbishop of Canterbury Dr Williams through their work with the Alister Hardy Trust, which promotes the study of religion.

Dr Williams has repeatedly refused to comment on their links. However, a blog for the vicar’s religious book – with the unfortunate title Crossing Boundaries – carries a recommendation from Dr Williams.

During a 40-year career Robinson held posts at churches in London, Surrey, Bath and Herefordshire before retiring in 2001. He was allowed to return to duties in Hereford as a non-stipendiary ‘priest in charge’.

Last year a Charity Commission inquiry into the Grail Trust and the charity’s Indian arm – formed to ‘advance religion, education and the relief of poverty’ – issued a damning indictment of those behind the body.

Trustees told the commission that when allegations against Robinson were brought to their attention they did not report them to the commission because they thought they were ‘malicious and unsubstantiated’. 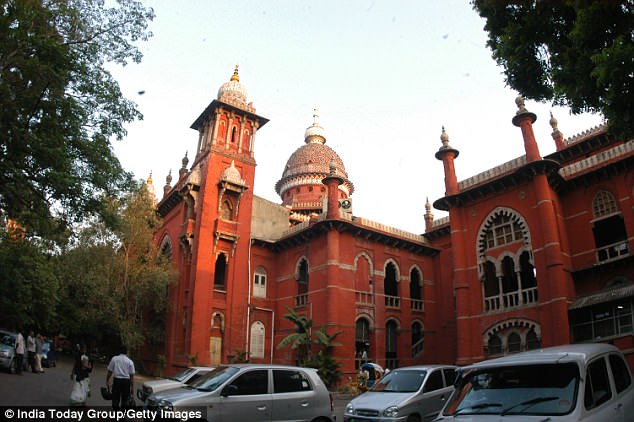 The High Court in Chennai, where a judge pondered if Robinson should be castrated

But the inquiry found their ‘response to the allegation was inadequate’. The inquiry report concluded that there had been ‘misconduct and mismanagement in the administration of the charity’.

In a statement this week the Grail Trust said: ‘We have consulted closely with the Charity Commission whose procedures and recommendations we have followed.

‘Rev Robinson has played no part in the charity’s work since he resigned as director on January 2, 2012. We as a charity have completely distanced ourselves from him.’

How charity interfered with case

The Grail Trust faced criticism in court for interfering with the police investigation into the assault claims by persuading the victim to sign a sworn statement that he had not been abused by the vicar.

Lawyers acting for the trust questioned him without the knowledge of Indian police. Gregory Retnaraj, a lawyer and trustee of Grail Trust India, persuaded the youngster to sign a prepared statement which ‘retracted’ his previous claims of abuse.

Robinson tried unsuccessfully to use the statement to get the case against him dropped, which led a judge to accuse him of witness tampering.

Court documents also reveal that the charity continued to give the victim money and support with his education following the allegations.

The trust is run by another Anglican clergyman, Neil Fairlamb, who was a Conservative candidate in the 2015 general election.