Cindy Crawford, 56, covers up as husband of over 20 years Rande Gerber, 60, goes shirt-free

EXCLUSIVE: Cindy Crawford, 56, models a flirty dress as husband of 24 years Rande Gerber, 60, is shirt-free in Mexico with daughter Kaia and her beau Austin Butler

Supermodel Cindy Crawford opted to not show off her body during a break in Cabo San Lucas, Mexico this week.

The 56-year-old perennial Vogue cover girl wore a flirty floral print dress over her bikini, adding a cream-colored hat and sunglasses as she headed to the swimming pool at her resort, where she is staying with kids Kaia and Presley.

But her spouse of 24 years, 60-year-old Casamigos co-founder Rande Gerber, went shirt free to prove he is still in great shape. 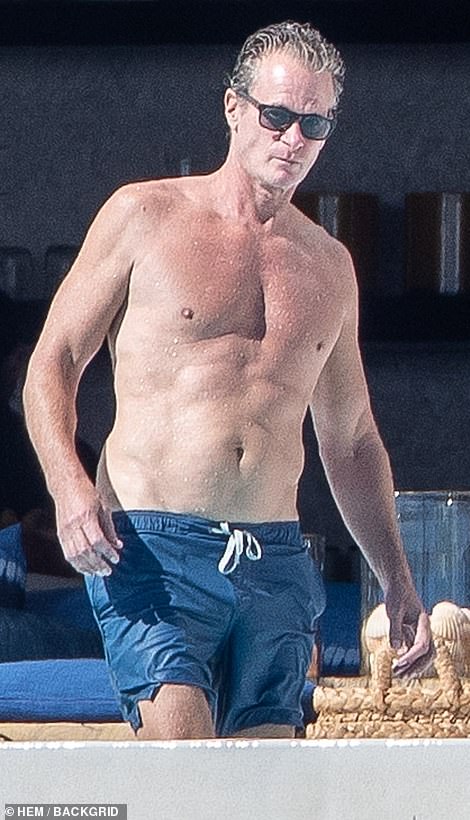 Power couple: Supermodel Cindy Crawford opted to not show off her body during a break in Cabo San Lucas, Mexico this week. But her spouse Rande Gerber went shirt free to prove he is still in great shape

Also on the trip was model Kaia Gerber, who had on a bikini that made the most of her svelte shape.

And her beau Austin Butler of Elvis fame was also on the holiday as he wore swim trunks as he held his girlfriend’s hand and put his arm around her, proving they are very much still an item.

Cindy and Rande’s son Presley was there too and he had a lady friend with him who showed off her tattoos as she wore a black bikini. 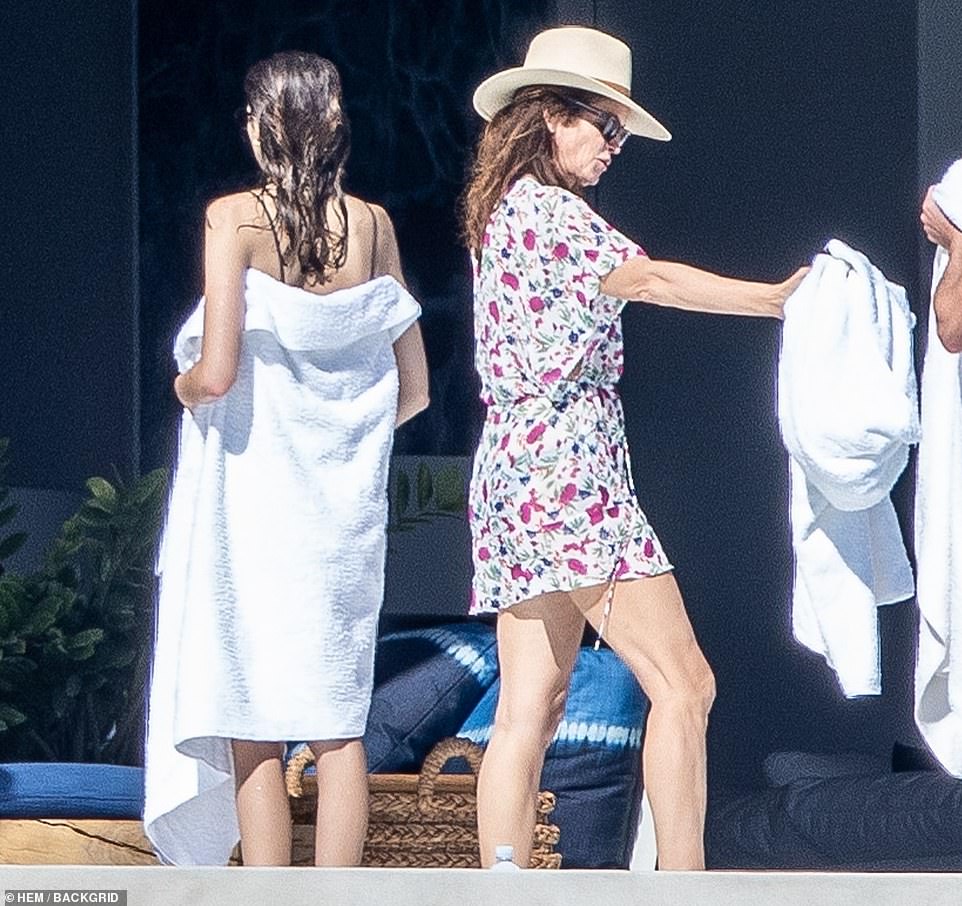 Dressed: The 56-year-old perennial Vogue cover girl wore a floral print dress and a cream-colored hat as she headed to the swimming pool at her resort, where she is staying with kids Kaia and Presley

Cindy and Rande wed in 1998 after several years of courtship and quickly welcomed two children, Kaia and Presley.

Crawford was in the news earlier this month for being seen with Brad Pitt as he took out his new lady love, Ines de Ramon. Rande and Brad have been close pals for many years; their common buddy is George Clooney.

This comes after Kaia said she learned learnt all her top make-up tricks from her glamorous mom. 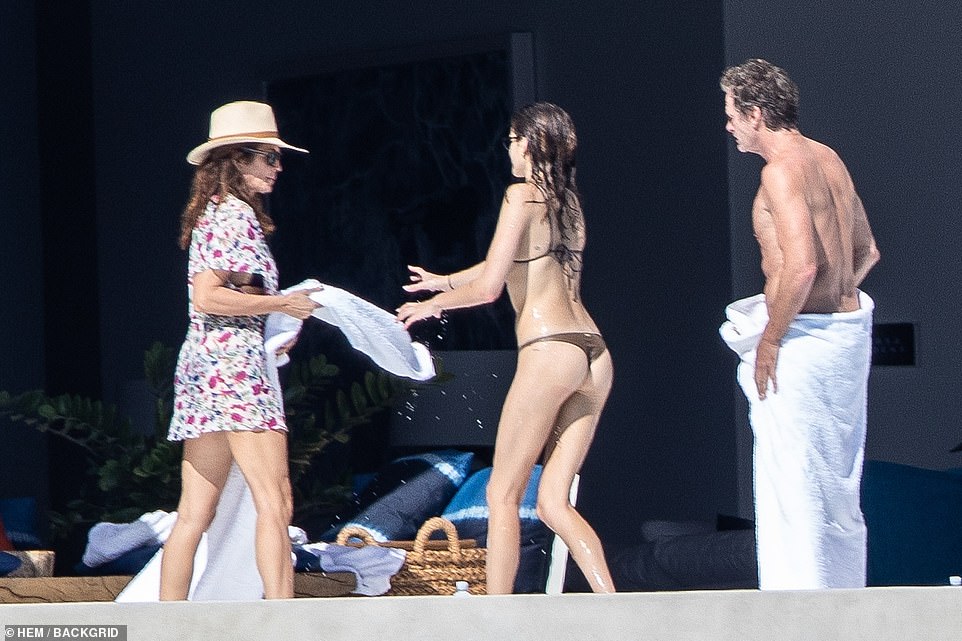 For her gal: Cindy handed mini-me daughter Kaia a towel as Rande, draped in a white towel, looked on

The 20-year-old model/actress has been following in her supermodel mother’s fashionable footsteps by landing campaigns for some of the world’s top design houses and shooting covers for Vogue magazine – and she’s now credited Cindywith helping shape her style.

Speaking to Elle magazine, Kaia hailed Francoise Hardy and Jane Birkin as her beauty icons as well as her mum, who showed her how to do her make-up.

She said: ‘I had my mum too, not only look up to, but go to for advice. I’d sit and watch her do her make-up, she’s a lot better at it than I am because she worked during the Nineties – now no one knows how to do their own make-up. I’ve definitely learned a lot from watching her.’ 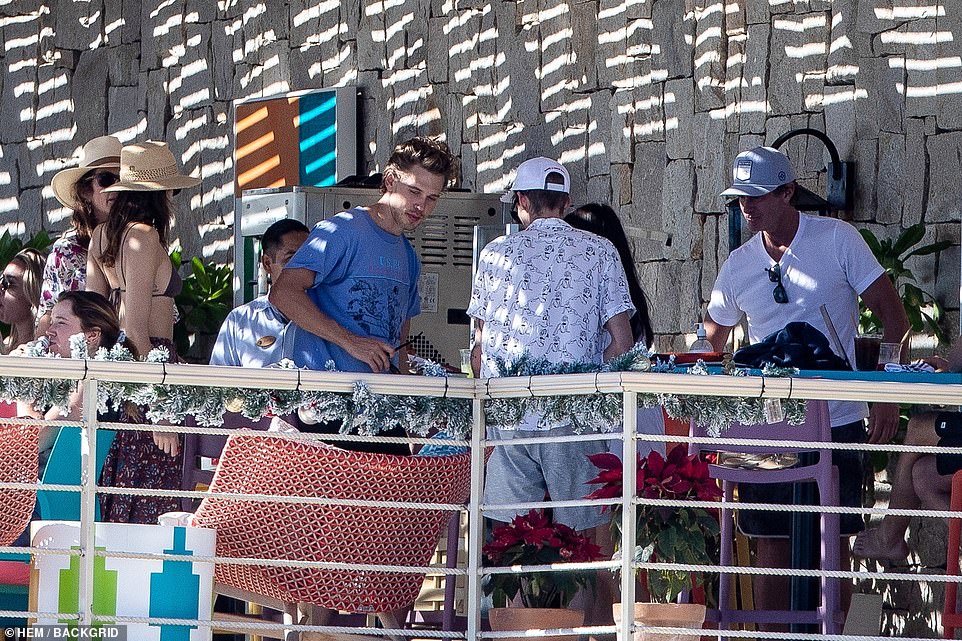 Party on: Cindy talked to Kaia as Kaia’s beau Austin Butler could be seen chatting up Presley; Rande is far right 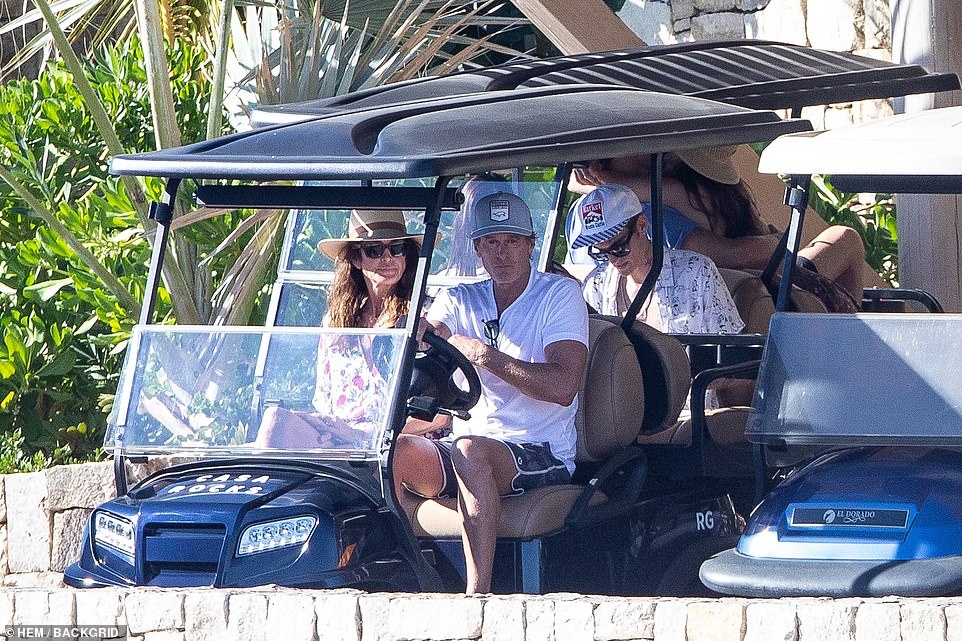 One big famous family: Here Rande took the wheel as Cindy rode shotgun with Presley and his girl in back and Kaia kissing Austin in the back seat

Kaia went on to reveal Cindy’s top make-up tip, adding: ‘My mum always just said less is more, and I’ve tried to live by that. I don’t think this is true for everyone, but I feel the most beautiful when I feel like myself so I try not to overdo it because I don’t want to feel like I’m wearing a mask.’

Another rule Cindy swears by is leaving your eyebrows alone. Kaia added:

‘Don’t touch your eyebrows! That’s a big one. It was such a big trend when I was younger to get your eyebrows threaded or waxed or tweezed but when I started modelling I got told, ‘Don’t touch them’ and I still haven’t.

‘Super skinny brows are coming back which is crazy because I thought we’d never go back to that. I’m tempted to try it but I also don’t want to mess with my brows. I’d be the person whose eyebrows never grew back and I’m too scared!’ 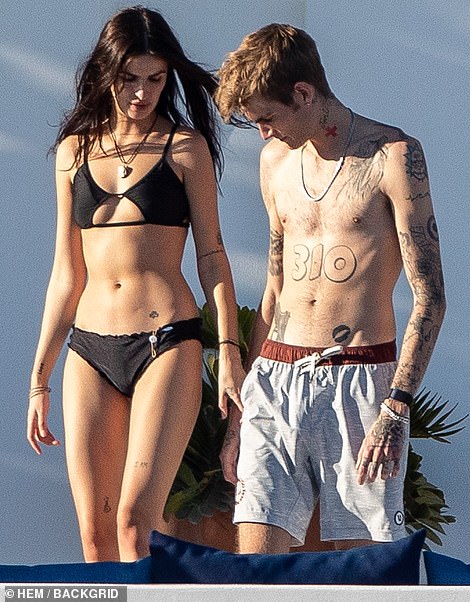 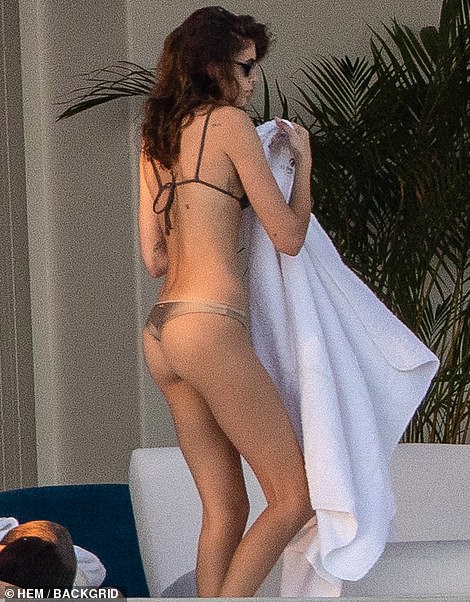 The new generation: Presley was with his lady friend who looked great in a bikini as Kaia showed off her svelte frame in a brown cheeky bikini