A female acrobat has crashed 30ft to the floor in front of screaming families ‘after slipping from her harness’ at the Winter Wonderland event in London’s Hyde Park.

The incident occurred at the Zippos Christmas Circus Show at 6pm, during a performance of Cirque Beserk.

Staff quickly rushed to help the artist, called Jackie Armstrong, 35, after she didn’t get up. The tent was cleared of shocked audience members.

A witness told MailOnline: ‘The lady had one foot in the loop with no actual harness and her foot slipped out and she fell to the floor diagonally.

‘Kids were on the front row and there were people screaming.

‘She was yelping in agony, it was traumatic as she bounced as she hit the floor. There was an announcement after a min or two to all leave.’

Staff quickly rushed to help the artist, called Jackie Louise Armstrong, 35, after she didn’t get up. The tent was cleared of shocked audience members. Pictured: Stock image of Winter Wonderland

Jackie Armstrong was taken to hospital but her condition is not known at this time.

A witness told The Sun Online: ‘It was horrific. I thought it was part of the act but when she didn’t get back up I knew something was wrong.

‘A group of people ran on to help her and people were shouting for a paramedic.

The person added: ‘I thought I heard her scream or wail, so hopefully she is conscious.

‘But it looked terrible. People in the audience were coming out crying. There were quite a lot of kids as well.’

Paramedics are understood to have gone into the tent as the audience was clearing out.

A spokesman for Zippos Circus confirmed an artist fell during the 6pm performance of Cirque Berserk at Hyde Park Winter Wonderland.

They added: ‘The female British artist, Jackie Armstrong, performs an aerial act and is a highly experienced circus artist with 10 years in the ring. 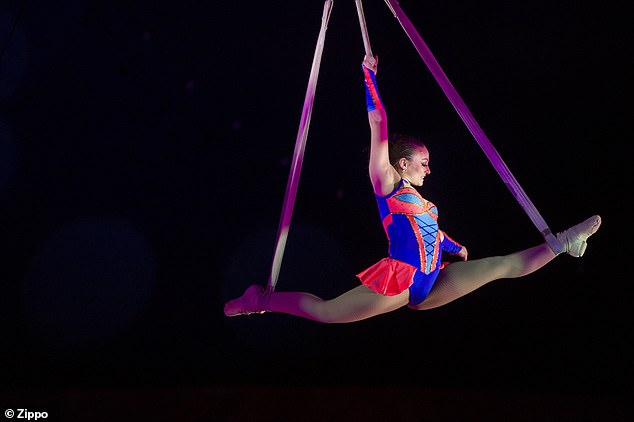 A spokesman for Zippos Circus confirmed Jackie Armstrong, pictured in a different show, fell during the 6pm performance of Cirque Berserk at Hyde Park Winter Wonderland

‘Jackie was immediately attended to on the scene by first aiders and an ambulance called. She was taken to hospital by ambulance and further information on the nature of her injuries is awaited.

‘Immediately following the incident, audience members were asked to leave the Big Top and offered tickets for the next performance that evening.

Circus Founder and Director Martin Burton told MailOnline: ‘Jackie is a very experienced artist whom we value dearly as part of our circus family.

‘Clearly we are concerned and offering her and her family our full support and sympathy at this time.

‘At this stage we cannot comment further as we have no information on any injuries she may have sustained.’