City official wants to ban cellphone use at crosswalks

A city official in northern California wants to pass a law that bans the use of cellphones at crosswalks saying the measure could help save lives.

San Mateo County Supervisor David Canepa believes the measure is a practical solution to help cut down on avoidable accidents and keep pedestrians safe while on the street.

‘Everyone loves their smartphones but let’s be honest — they can be downright dangerous,’ The Mercury News  quoted Canepa as saying.

A city official in San Mateo County, California looks to ban pedestrian cellphone use at crosswalks

The proposal has already garnered support from board supervisors in the county, who joined together to pass a resolution asking state legislators to take up the measure.

In their proposal, the supervisors cite a National Safety Council report published in 2015 that showed accidents involving distracted pedestrians using their mobile device accounted for 11,000 injuries between 2000 and 2011.

They also point to a study commissioned by Ohio University which found that an estimated 1,500 people required emergency medical attention due to distracted walking incidents involving cellphones in 2010. 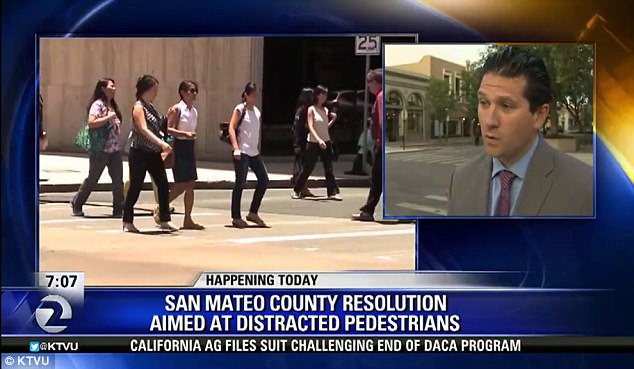 David Canepa is seeking a statewide ban on pedestrian cellphone use at crosswalks, calling it dangerous

That accounted for a two-fold increase since 2005 despite an overall decrease in pedestrian accidents arising from all causes.

The NSC report concludes that it is ‘just as important to walk cell free as it is to drive cell free,’ because ‘pedestrians and drivers using cellphones are both impaired and too mentally distracted to fully focus on their surroundings.’

The country already has a precedent for such bans, including in Honolulu, Hawaii, but Canepa’s resolution seeks to enforce a statewide restriction.

Last year, the state of California saw 892 pedestrians deaths on roadways, accounting for more than 24 per cent of all roadways deaths.

That accounts for a 17 per cent increase from 10 years ago, according to The Mercury News.