Justice Clarence Thomas hit out at Joe Biden for leading the effort to derail his confirmation to the Supreme Court because of his conservative views on abortion.

The conservative justice also denied allegations made at the time by Anita Hill, an African-American law professor who accused Thomas of sexual harassment.

‘Do I have like stupid written on the back of my shirt? I mean come on,’ Thomas says in a PBS documentary about him set to air in the spring.

‘We know what this is all about.’

Thomas continued: ‘People should just tell the truth: “This is the wrong black guy; he has to be destroyed.” Just say it. 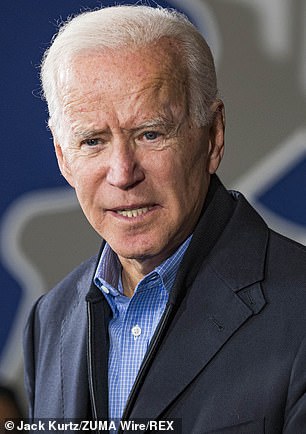 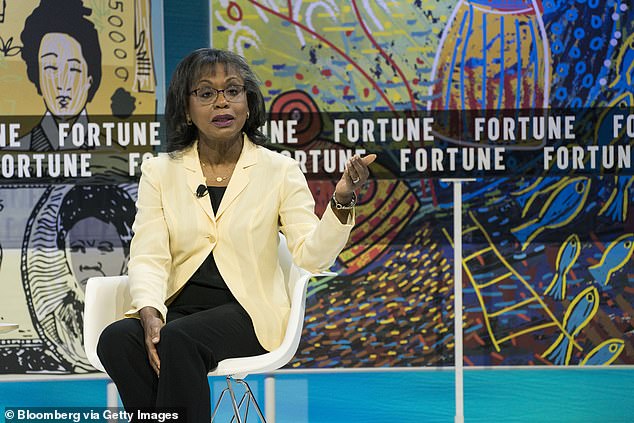 Thomas once again denied sexual harassment allegations made by Anita Hill (above), a law professor

‘Then now we’re at least honest with each other.’

Thomas says that the Hill allegations were a ploy by Democrats to torpedo his confirmation.

‘And then after I was there, it was to undermine me.’

A sneak preview of the documentary, Created Equal: Clarence Thomas In His Own Words, was provided to ABC News.

Thomas, who rarely speaks in public, was interviewed by filmmakers on a number of occasions over a six-month period in 2018.

Michael Pack, a conservative filmmaker, and Manifold Productions, produced the film, which they bill as a chance to ‘tell the Clarence Thomas story truly and fully, without cover-ups or distortions.’

He took aim at Biden and Democrats, accusing them of ‘caricaturing’ him because of his views on abortion. 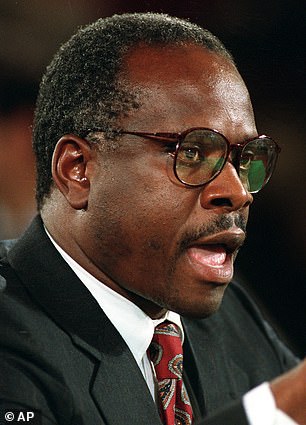 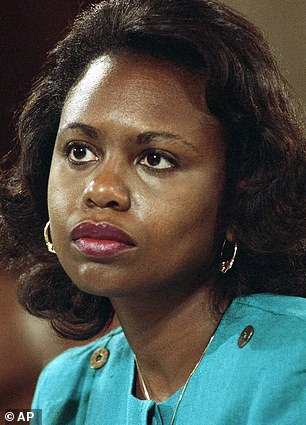 Thomas (seen left in 1991) slammed Democrats for their conduct during the confirmation process, saying that they used the allegations made by Hill (seen right in 1991) to try to thwart him because of his views on abortion

‘I felt as though in my life I had been looking at the wrong people as the people who would be problematic toward me,’ Thomas says in the film.

‘But it turned out that through all of that, ultimately the biggest impediment was the modern day liberal.

Biden, the current Democratic frontrunner for president, was chairman of the Senate Judiciary Committee in 1991, when then-President George HW Bush nominated Thomas to the bench.

While Thomas does not mention Biden by name, he accused the then-senator from Delaware of ‘tricking’ him into discussing abortion.

The film clip provided to ABC News shows Thomas watching footage of Biden questioning him during the hearings about his views on natural law.

‘I have no idea what he was talking about,’ Thomas says of Biden.

‘I understood what he was trying to do. I didn’t really appreciate it. 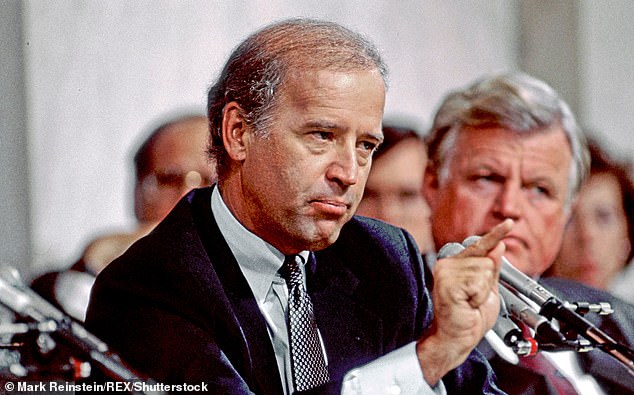 ‘Natural law was nothing more than a way of tricking me into talking about abortion.’

When asked to comment about Thomas’s remarks, a spokesperson for Biden told ABC News: ‘Then-Senator Biden voted against Clarence Thomas in the Senate Judiciary Committee, he argued against him on the Senate floor, and he voted against his confirmation to a lifetime seat on the Supreme Court.

‘It is no surprise that Justice Thomas does not have a positive view of him.’

The Senate eventually confirmed Thomas to the bench by a 52-48 vote in October 1991.

Thomas is opposed to abortion rights. He has urged the Supreme Court to reconsider Roe v Wade, the landmark 1973 ruling that made abortion legal in the United States.

The justice said that those trying to sink his confirmation were only concerned with his anti-abortion views.

‘Most of my opponents on the judiciary committee cared about only one thing,’ Thomas says in the film.

Thomas’s criticism of Biden is ironic given that liberals have also faulted Biden for his treatment of Hill. 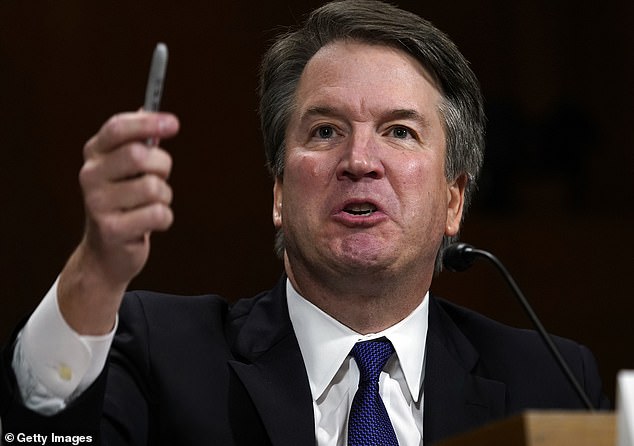 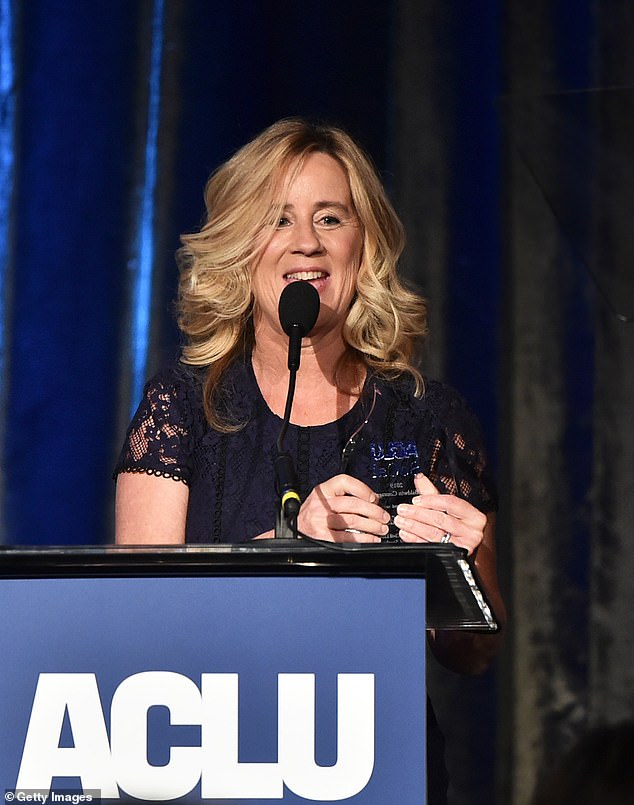 During the confirmation process, Kavanaugh was accused of sexual assault by Christine Blasey Ford (seen above in Beverly Hills on November 17)

Biden has been accused of failing to adequately investigate Hill’s allegations against Thomas.

He has also been accused of failing to stick up for Hill while her credibility was questioned by Republican committee members.

The committee of all-white men led by Biden also refused to hear from potential witnesses who also alleged that Thomas behaved inappropriately with them.

Earlier this year, Biden reached out to Hill by telephone, telling her that he had ‘regret for what she endured’ during the hearings.

But Hill, who teaches social policy, law, and women’s studies at Brandeis University, did not accept Biden’s message.

‘I cannot be satisfied by simply saying, “I’m sorry for what happened to you”,’ she told The New York Times in April.

‘I will be satisfied when I know that there is real change and real accountability and real purpose.’

Biden’s conduct in the Thomas hearings could cost him support among Democratic women voters, particularly in the era of #MeToo, which has seen greater awareness and sensitivity toward the issue of sexual harassment.

The spectacle of the Thomas hearings appeared to repeat itself last year during the contentious debate over the confirmation of Brett Kavanaugh.

Kavanaugh, who was appointed by President Trump to fill the seat of retiring Justice Anthony Kennedy, was accused during the hearings of sexual assault.

Christine Blasey Ford, a professor from California, testified that Kavanaugh assaulted her during a high school party in Maryland more than three decades ago.

The hearings galvanized the country which tuned in by the millions to the televised confirmation hearings.

Kavanaugh was eventually confirmed to the bench by a largely partisan vote in the Senate – 50 to 48.