Think of Claudia Winkleman, and the first thing that comes to mind – after that deep black fringe and the spray tan – is hugs. Each week on Strictly Come Dancing she’s either doling out sympathy to weeping dancers or bouncing up and down alongside them with joy.

Not this time. Within the first ten minutes of this game show, she heartlessly turfs out two of the contestants and is barking orders to the rest.

‘No cuddling,’ she orders, stonyfaced. ‘That’s a different show.’

And yes, it really is. The Traitors, filmed in a castle in the glorious Scottish Highlands, is about as far from Strictly as you can get, a wonderfully evil exercise in treachery, requiring its competitors to lie and bump each other off – off the show, that is. It is, therefore, utterly compelling.

Claudia Winkleman (pictured) is hosting a new game show called The Traitors, which is set in the Scottish Highlands and requires competitors to fight against each other

The show is based on the Dutch series which has been a huge hit, and an American version is also on its way. But Claudia admits she turned the job down when it was first offered, due to the remote location.

‘I’ve been to the countryside twice, I never leave home, and my daughter was doing her GCSEs, but then they said, “Just watch it,”’ she recalls, having been given the Dutch version.

‘I then pressed play, and I didn’t eat or sleep for two days as I became obsessed. Nobody in my house got fed and I didn’t even brush my teeth.

‘I phoned the producer and said, “I’m going to book the train to Scotland for tomorrow. Let me do this.” It’s such a privilege. I feel so lucky.’

The 12-episode series, which will be shown over four weeks, sends 22 people to the castle to play a game that has echoes of Agatha Christie’s And Then There Were None, in which the characters, gathered on a remote island, are killed one by one. 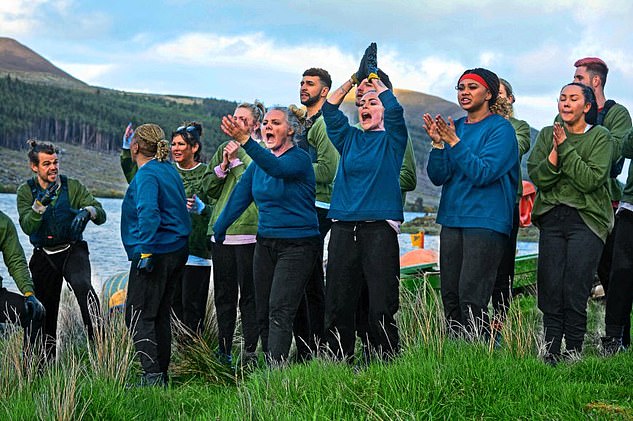 The contestants of the show pictured during a challenge, which can include rowing across a lake and bell-ringing

By day, the contestants work together as a team to perform challenges – including rowing across a lake and bell-ringing – which will help bump up their prize pot to a maximum of £120,000.

But several of them are secretly ‘Traitors’, handpicked by Claudia at the beginning of the series. It is their job to deceive the rest, known as the ‘Faithful’.

Every evening, the whole group gathers at the ‘Round Table’ to try to expose the Traitors in their midst. They vote on the most likely suspect, who is then sent home, regardless of whether they were a Faithful all along.

Later, at midnight, the Traitors secretly meet to plot which of the Faithful they’d like to be rid of next, and that person is ‘murdered’, and also sent home.

It’s a battle of wits to see which group will win the prize pot at the end. If there are any Traitors left in the game by the end, they will take it all.

I like being a ball of positivity normally, but I had to take a step back and watch them kill each other

If they’ve all been found out during the Round Table meetings, the remaining Faithful get the prize pot.

‘I’d love to be a Traitor,’ admits Claudia. ‘It’s a game of smarts – and that doesn’t mean how many degrees you have. The scheming is fantastic.

‘One of the Traitors is good at playing dumb, such a wily fox. I’m rooting for them, but at the same time, when the Faithful finally get a Traitor out, you can’t believe it.

‘I wanted to cry with joy. I’m dangerously into this show.’

While it’s a game of wits, it’s also a brilliant illustration of how crafty people can be, and of the way people work in groups.

According to Claudia, it’s the Round Table meetings that are the most gripping part of the show. ‘They all come and sit and look into each other’s eyes to try to figure out who they should be banishing from the game,’ she says.

‘No one knows who to trust. Watching the players come to their conclusion is pure drama and some people are so good at influencing the group, even if their convictions are totally off.

‘People become so definitive in their judgements, and they hack each other to pieces. It’s incredible.’ 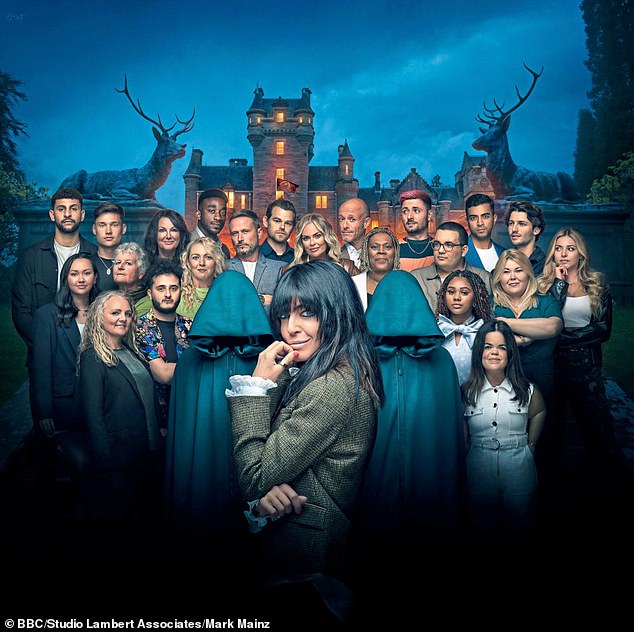 The Highlands setting proved a rather gorgeous foil to the dirty scheming taking place. ‘It was absolutely breathtaking,’ recalls Claudia.

‘On day two we saw a double rainbow and we were all crying at the beauty of it, but by day 22 we realised this happened all the time – it was magical. My only challenge was finding someone who could do a spray tan in the Scottish Highlands.’

‘Dressing up was fun – this is my dream wardrobe and what I’ve wanted to wear.

‘I was channelling Princess Anne meets Ronnie Corbett meets Madonna when she first got together with Guy Ritchie. The costume becomes ever zanier – by the end I am more Lorraine Chase meets Adam Ant meets Meat Loaf – I can’t tell you why because I don’t know.

‘I like being a ball of positivity normally, but that wouldn’t have worked,’ she adds. ‘I didn’t want to be too cruel as I am on their side.

‘But the problem is that I’m on all of their sides. I want the Traitors to win and I also want the Faithfuls to catch them.

‘I had to take a step back and watch them kill each other.’