Cleaner sacked for protest outside Topshop wins payout up to £75,000

A cleaner sacked after leading a ‘poverty pay’ protest outside Topshop could be entitled to a compensation payout worth up to £75,000.

Maria Susana Benavidez Guaman, 43, was one of 200 protesters who denounced protesters in front of the flagship Oxford Street branch, demanding more money for agency cleaners.

Mrs Benavidez said she was paid £6.75-an-hour and wanted a ‘few pounds more’ to ensure she and her colleagues were paid the London Living Wages, a tribunal heard.

Susana Benavidez at a protest outside Topshop, Oxford Street, March 2016

The protest in March 2016 forced the store, owned by Sir Philip Green, to close its doors for 15 minutes as protesters lambasted the ownership.

Mrs Benavidez was fired for gross misconduct, with Britannia Services Group Ltd citing her use of social media to drum-up support against its client, Topshop.

The mother-of-three from Finsbury Park, London, contested the decision in court after a hearing at the Central London Employment Tribunal and she now has the right to compensation.

Although a figure is yet to be agreed upon, court documents revealed she wants £75,000.

Judge David Pearl ruled Mrs Benavidez, originally from Ecuador, was fired by Britannia for exercising her right to protest for better pay and working conditions as part of a trade union.

He said: ‘No reasonable employer would have been acting reasonably in dismissing Mrs Benavidez in the circumstances. 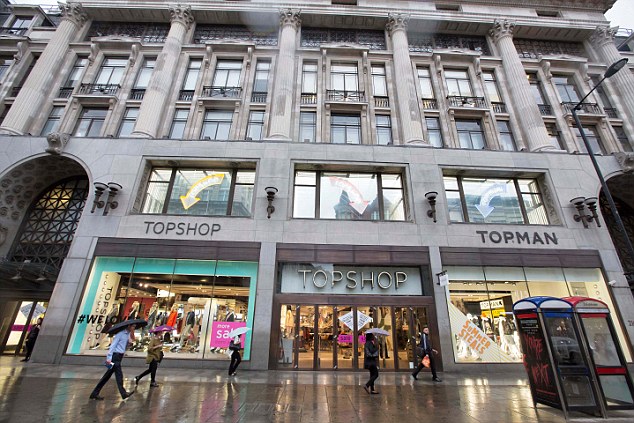 ‘The entire process, we conclude, was designed to ensure that she was dismissed as a result of the various trade union activities she had been engaged in.’

The tribunal heard Mrs Benavidez cleaned at the three-floor, 90,000 square foot store from 2009 until she was sacked in October 2016.

She immersed herself in trade union activities and became a shop steward for United Voices of the World, a union which represents mostly low-paid migrant workers.

The union campaigned for the London Living Wage in February 2016 – then £9.40-an-hour – for its members, as Mrs Benavidez became the ‘face of the campaign at Topshop’.

A letter was sent to Britannia which noted Sir Philip’s Arcadia Group’s rise in profits, and threatened a demonstration outside the store as a way of rallying public support.

Neither Britannia or Topshop replied to the letter, which Britannia later branded a ‘crude attempt at blackmail’, according to the judge.

Mrs Benavidez started a petition on change.org, which the judge said was addressed to Topshop and Sir Philip, requesting that they ‘pay your cleaners the Living Wage’.

On it, she wrote: ‘Although I am not directly employed by Topshop, they have the power to ensure me and my colleagues are paid a Living Wage.’

She labelled the wages she and her colleagues were receiving were ‘poverty wages’.

During the demonstration on March 12, 2016, Mrs Benavidez was filmed holding a banner criticising Britannia while a man near her holds a placard which read ‘Topshop shame on you’. 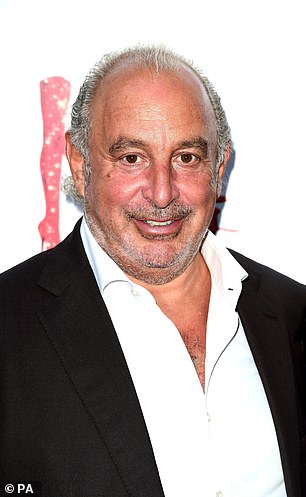 He said: ‘In our view…it is clear beyond any argument that Mrs Benavidez was dismissed for the reason that she had taken part in the activities of the independent trade union,’ he said.

‘What has occurred in this case is that she was dismissed for activities, all of which amount to taking part in the activities of the union.’

Lawyers will now battle over how much Mrs Benavidez should be paid and the judge will make a final award at a later date.

In a statement to the tribunal, Mrs Benavidez described the period after she was sacked for her role in the protest as one of ‘the most terrible’ times in her life.

She said: ‘I still find it hard to believe that asking for a few pounds more per hour from such a rich company that has a multi-million pound client can result in the systematic persecution of people.

‘My daughters are now proud to see that I have fought through this, but I feel incredibly sad that they had to witness my suffering and about the impact that that had, and has, on them.

‘I felt I had to fight until the end, however difficult, for their sake. I was worried of losing my dignity and self-respect and how this would impact them.

‘The trauma of this period continues to affect me to this day and I cannot talk about any of this without being reduced to tears.

‘Whenever I have to speak about it, it is like reliving the situation.’

The Tribunal’s final decision on the level of Mrs Benavidez’s payout will now be handed down at a later date.

Britannia is planning to appeal against the automatic unfair dismissal ruling.