New cleaners are being paid more than $90000-a-year by desperate companies fighting against a shortage of workers.

Joy Vess, the managing director of Absolute Domestics, a cleaning company based in Sydney, says they have been forced to put up salaries because of their struggles to attract staff.

She said they had increased their rate to $45 an hour – meaning that a cleaner with no experience who works eight hours a day five days a week will now earn $93600.

‘I can see that it is making a difference now… the applicants are just elated,’ Ms Vess told the Daily Telegraph.

A cleaner is seen vacuuming at City Gym in East Sydney. Cleaners are seeing their salaries soar

What’s the starting salary for sectors requiring a degree?

‘Since mid 2021 I haven’t been able to get enough cleaners to service the business, in some areas I don’t market at all — Bondi, Manly, I don’t advertise at all because I can’t get cleaners there at all.

Despite the raise, she is still struggling to find staff for some areas of Sydney and is calling on the government to allow international students to work more hours.

A spokeswoman said that could even go up to $60 an hour depending on how quickly they clean.

This means that a cleaner working full time for the firm would earn $124,800 a year. 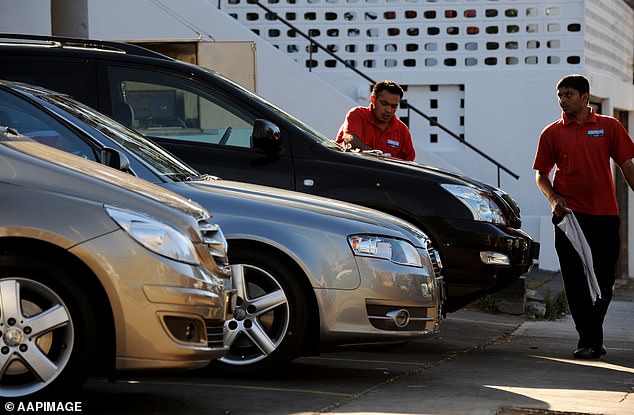 Joy Vess, the managing director of Absolute Domestics, a cleaning company based in Sydney, says they have been forced to put up salaries because of their struggles to attract staff

Meanwhile Crystal car wash have job advertisements offering $30 an hour. The firm’s job ad just says: ‘no need to call, just show up at your preferred location and START.’

Cleaner Veruska Benedito from Bexley in Sydney says her take home pay has doubled since she started and she can earn between $40 and $55 an hour.