Clear your diaries for Downton the movie, stars are told

It’s been a long-running drama all of its own: will there, or won’t there be a big screen version of Downton Abbey?

Now one of the show’s most popular stars, Phyllis Logan, has put speculation to bed – with the same dependable efficiency as her character, the housekeeper Mrs Hughes.

The actress revealed to The Mail on Sunday that a new script has been completed and filming dates arranged for 2018.

‘There’s a potential script coming our way, slightly rewritten,’ said Ms Logan. And she revealed the cast have been consulted about when they are available.

‘Everyone’s been asked what’s going on between this date and that date,’ she continued. ‘So we just hope that all the elements – because there are so many – come together. To have a last hurrah with all the characters, going back to the castle and seeing all the old muckers will be fantastic. I’m certainly up for it.’

It is understood Highclere Castle, near Newbury in Berkshire, where the original series was filmed, will be closed to visitors from May 30 to July 7, thought to be for exterior and interior filming.

‘It was a great show to do and a great character to play and I will forever think fondly of Mrs Hughes,’ said Ms Logan, 61. ‘In fact, it was one of the best gigs of my life and opened up so many other avenues and put a different spin on my career.’

Downton Abbey shut its doors for the last time on Christmas Day 2015, but millions of fans have been hoping for a movie version of the drama.

NBC Universal International Studios had hoped to start filming in 2017 with 20 of the original cast members, including Hugh Bonneville, who played Lord Grantham, and Michelle Dockery, who played Lady Mary Crawley. 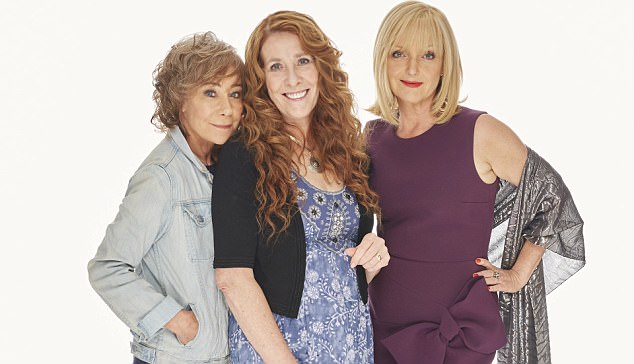 All were asked to keep their diaries open but the project never got under way, leaving many wondering if the film would happen at all.

There was further disappointment when it emerged that Dame Maggie Smith, 83, who played the Dowager Countess of Grantham, had ruled out taking part, saying she was too old.

Such is the popularity of Downton that Mrs Hughes has fans around the world, including a woman from Boston, Massachusetts, who had the household keys to Downton Abbey tattooed on one hip. ‘I kid you not,’ said Ms Logan. ‘Though, unfortunately, she has them on the wrong hip. She also had the wig and the full outfit.’

For now, Ms Logan is appearing in a new comedy drama about ‘women of a certain age’.

Girlfriends, from Bafta-winning writer Kay Mellor, starts on Wednesday and also stars Miranda Richardson and Zoe Wanamaker. ‘We are like the musketeers – three post-middle age women taking on everyone and everything,’ said Ms Logan.

Happy ever after? If only… 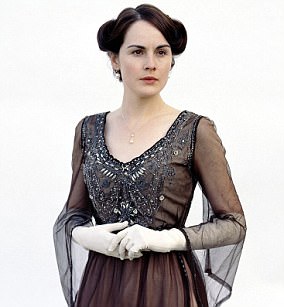 So what can fans expect when Downton hits the big screen? Events so tumultuous that even the ice-cold Lady Mary (Michelle Dockery, right) might raise a perfectly groomed eyebrow.

After the TV series took the saga of the Crawleys and their servants from the sinking of the Titanic in 1912 to the peak of the Jazz Age in 1925, the movie is poised to enter the darkest chapter in modern history.

The financially beleaguered Earl of Grantham and his family are likely to be seen struggling to hold on to their stately home as the Wall Street Crash of 1929 ushers in the Great Depression, in an echo of the final series of Upstairs Downstairs.

The tale is set to take place against the backdrop of the growing menace of Nazi Germany, before war draws in everyone above and below stairs, just as the First World War did in the TV show.

Viewers must also brace themselves for the likely death of much-loved characters, including the elderly Dowager Countess played by Dame Maggie Smith.