Cliff Jones springs to his feet to show precisely how Bobby Smith hoisted Costa Pereira up by his shirt front with one hand while rolling his other fist in the air and repeating the word ‘Londres’.

Whoever thought it was a good idea to host a grand reception in Lisbon after the first leg of a European Cup semi-final is not known, but it was not an initiative designed to last.

Imagine Tottenham and Manchester City players adjourning midway through their quarter-final tie to discuss the intricacies of VAR over champagne and canapes.

Cliff Jones, pictured in his home recently, played for Spurs in a 1962 European Cup semi-final

Back in 1962, Spurs were nursing the wounds of a 3-1 defeat and a couple of disputed decisions in Portugal, and Smith had taken issue with a comment from veteran goalkeeper Pereira.

‘Things suddenly got out of hand,’ recalls Jones. ‘Bobby’s grabbed him like this and I remember he kept saying “Londres, Londres, Londres”… you know, just you wait; you’re having it at White Hart Lane.

‘We’d lost and Greavsie had a very debatable goal disallowed but we knew we could beat them at home. We had a good side, and Bobby was one of our most effective players in Europe because they’d never seen his style of play.

‘He was tough and he’d get into them and he could play. You don’t score over 200 goals if you can’t play. He’d hold it up and bring people in, he was good in the air and he frightened goalkeepers to death.’ 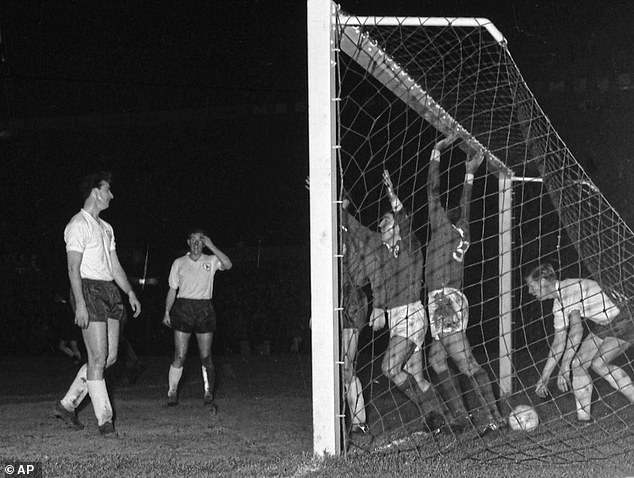 Spurs went behind at the Lane but responded through Smith, his sixth of the campaign, and a penalty from Danny Blanchflower, who never missed from the spot.

‘Well, we were all over them. Won 2-1, but it wasn’t enough. How we never did it I’ll never know. We thought we’d do it — and we thought whoever won that was going to win the European Cup.’

Sure enough, defending champions Benfica went on to beat Real Madrid in the final in Amsterdam. Tottenham would wait 57 years before they returned to the last four. Once again, Amsterdam is on the horizon.

Jones connects modern Spurs under Mauricio Pochettino to the Glory, Glory era of Bill Nicholson. Jones is a familiar presence as a club ambassador, sprightly in defiance of his 84 years. He starts each day with an exercise routine of 20 press-ups, 20 sit-ups and some light weight training. 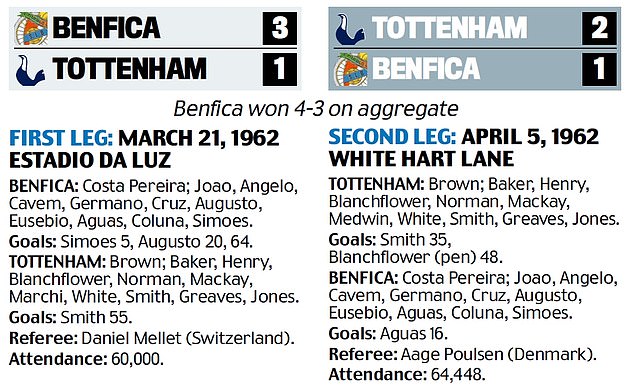 ‘I’ll do some now for you if you want,’ Jones offers. ‘I’ve been lucky, I haven’t put on any weight. I’m lighter than when I played. Now I’m just under 10 stone. I’ve always been in a physical profession.

‘I worked as a games instructor in a school in Highbury Grove. Surrounded by Gooners, I was! That kept me ticking over.’

He is a golfer with a handicap of 18, and has not touched alcohol for more than 30 years, since an intervention from his wife Joan — they have been married for 62 years — and Jimmy Greaves. ‘I wouldn’t be here today if it wasn’t for them,’ Jones says.

‘I’d crossed the line. I liked a drink and there was nothing wrong with that, but there’s a line and when you cross it there’s an effect on your family.

‘It was a progressive illness and Joan got hold of Jim, who came round and said, “Cliff, you’ve got a lovely home, a lovely family and a job, do you want to lose it all? You will if you don’t stop drinking”. Jim knew because it happened to him.

‘When he told me to go Alcoholics Anonymous I thought he was joking, but I’ve been going there twice a week for 30 years. A day at a time, as we say. I accept the fact that I’m an alcoholic.

‘I haven’t had a drink for over 30 years. When Tottenham beat Manchester City in the Champions League, I celebrated with a cup of tea, and I’ll do the same if they beat Ajax.’ 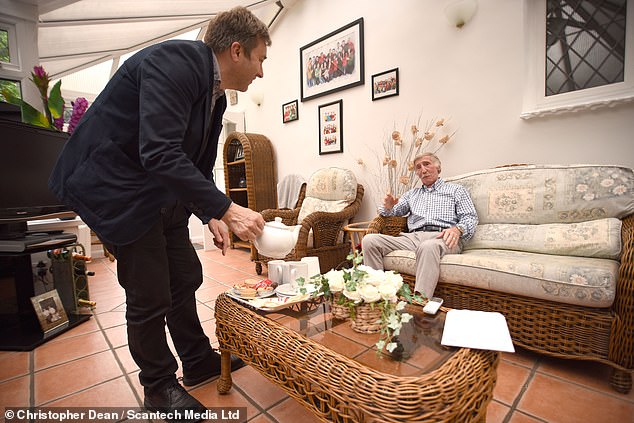 At home, surrounded by photographs of his family and sporting memories, Jones points at a frame in honour of Tottenham’s top scorers: ‘Look,’ he says. ‘Jimmy Greaves, possibly the worst header of a ball you will see, and they’ve got a picture of him scoring with his head.’

Jones scored 159 goals in 378 games in a decade at Spurs, and quite a few were headers. He ranks fifth behind Greaves, Smith, Martin Chivers and Harry Kane, who is more than 100 shy of Greavsie.

‘Jim is the greatest of all goal-scorers,’ says Jones. ‘An absolute natural. All he wanted to do was put the ball in the net. He didn’t care if he played brilliantly. The only thing was, when he scored, no emotion.’

When he reflects on Nicholson’s Double winners, a side which went on to claim the FA Cup again in 1962 and the European Cup-winners’ Cup in 1963, Jones believes the success hinged heavily on three midfielders.

‘I always say we had three players — Danny Blanchflower, Dave Mackay and John White — and if they were at it we were at it. We all bounced off them. Danny was a real captain. When we went on the field he became the coach and would make the changes. Sometimes they worked, sometimes they didn’t and there’d be words, but there was always a respect.

‘I can remember him saying to me, “Cliff, do you realise the ball is round? It will roll. Pass the f***ing thing now and again, son”.’ 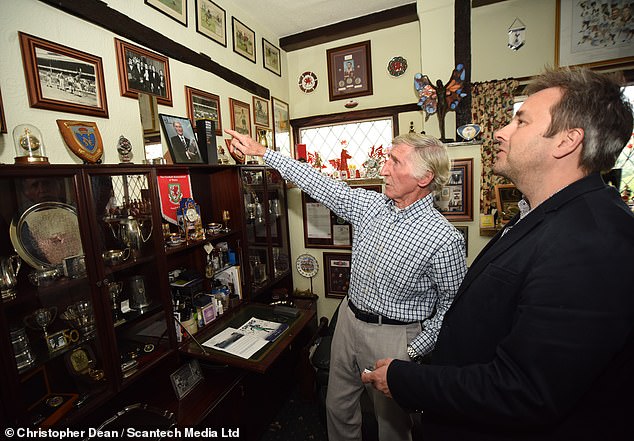 If Blanchflower supplied the tactical acumen, it was Mackay who injected the winning spirit.

‘We were a very good side but we possibly lacked a bit of desire and commitment, a will to win if you like, and Mackay brought all that with him. He’d just won the Scottish League and Cup with Hearts. He was an absolute winner.’

White was another Scot, signed from Falkirk but killed in his prime at 27 when struck by lightning at Crews Hill golf course near Enfield, in July 1964.

‘We’d been down at the ground doing a bit of work on the track,’ says Jones. ‘We always messed around like a couple of schoolboys and when I noticed he’d left his trousers out, I nicked them and went home.

‘He’d asked me if I fancied a round of golf but I wasn’t into golf then. So he found a pair of tracksuit bottoms, went up there and played on his own. There was a thunderstorm and he sheltered under a tall range of trees. He was leaning against a tree when the lightning struck.’

The tragic loss marked the beginning of the end for a great team. ‘We were never as effective without John in midfield,’ says Jones. ‘When you picked the ball up you knew there would always be one person available to pass it to and that was John. He had this knack of being able to move around to field and support the player on the ball.

‘He was very special. Bill never found someone to do the same job. We brought Terry Venables in and he was a very good player, good passer of the ball, but he didn’t do what John did. We had to change things.’ 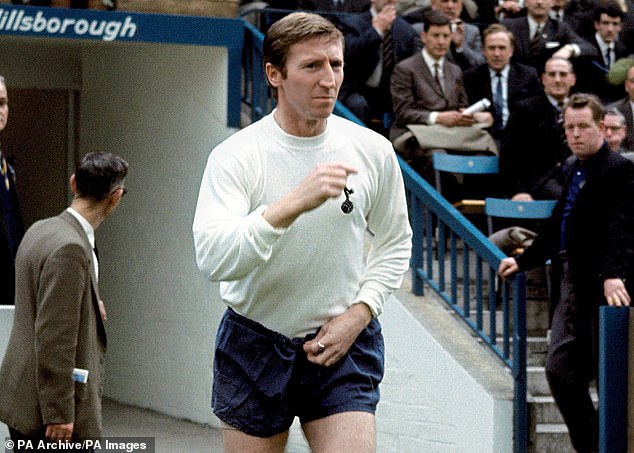 Sixty-one years have passed since Jones rejected Arsenal and signed for Tottenham from Swansea, for £35,000 with a £10 signing-on fee. There was interest, later, from Juventus, which was dismissed by Nicholson in a style which might impress Daniel Levy.

‘We played against Juventus and slaughtered them,’ says Jones. ‘I had a good game and they all descended on my house in Palmer’s Green with a famous agent at the time called Gigi Peronace. They were offering me hundreds of pounds a week which was quite amazing for that time. The maximum wage had just been abolished and I was on £40 a week. John Charles was at Juventus, which was a big thing for me.

‘Anyway, Bill told Juventus they could have me in four years’ time, and that was the end of that. I was happy at Tottenham and the team was coming into shape. For four or five years we were the team to see and White Hart Lane was a fortress.’ 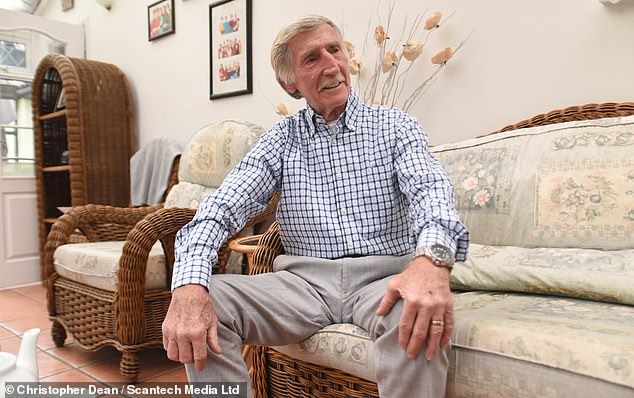 Jones is certain Tottenham’s new stadium can have the same impact on a Spurs team he considers to be their best since the Sixties.

‘Some things are exactly the same as they were all those years ago,’ he says. ‘We’ve got a manager who appreciates good football and Mauricio Pochettino is exactly the same as Bill Nicholson. He is the main man and all the players buy into his schemes.

‘Without a doubt it’s the best team they’ve had since the team I played in. There’s so much talent there. They’ve got to start winning a few things and I’m sure when they win one, they’ll win more.

‘You could have said the same about our Tottenham. We were going along very nicely and perhaps we were lacking something. That’s when Bill went and got Mackay and then we took off. It was like Roger Bannister breaking the four-minute mile. We were the first team to do the Double and the first team to win a European competition.’

The one they missed was the European Cup and here they are, finally, back in the semi-finals, with Pochettino bidding to bring to Londres the prize Bill Nick’s great team could not win.

Pride of place in Jones’s home is a set of 11 ceramic football figures, his dream team. All have been autographed on the base, with the poignant exception of Duncan Edwards. 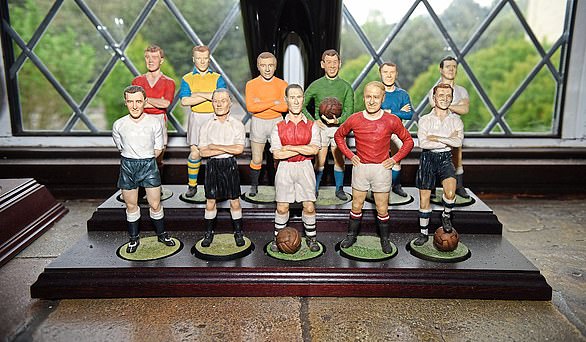