The Swedish schoolgirl behind the children’s global warming school boycott is now calling for adults to join them in a general strike.

Greta Thunberg is the 16-year-old whose refusal to go to school because of climate change led to children around the world skipping classes to protest.

She came to Britain last week and spoke to the activists camping out in Marble Arch and causing chaos to London’s transport networks.

Today, Greta will visit the House of Commons to speak to Labour leader Jeremy Corbyn and environment minister Michael Gove.

Speaking at an event in London yesterday, she called on the UK to hold a general strike over climate change.

The schoolgirl then told Radio 4’s Today programme this morning that there needs to be ‘a level of panic’ over climate change.

She added: ‘If your house is on fire then that does require some level of panic.

‘You don’t sit talking about insurance claims and rebuilding – you do everything you can to put out the fire.’

The Nobel Peace Prize nominee is also expected to meet the leaders at around 11.30am on Tuesday before giving a speech at a meeting in Portcullis House at around 2pm. 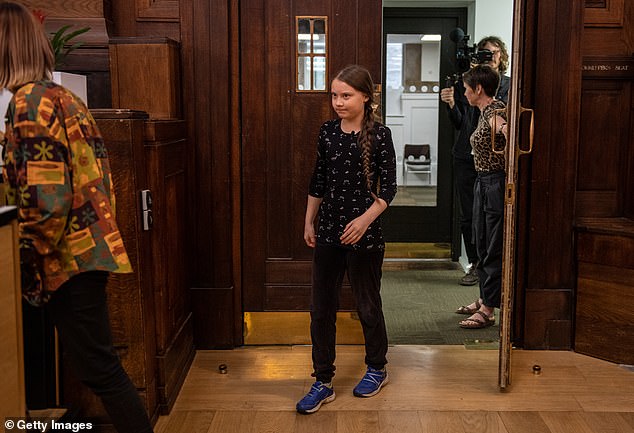 Six months ago, the then-unknown Miss Thunberg camped outside Sweden’s parliament next to a hand-written sign that read ‘Skolstrejk för Klimatet’ (School strike for the climate).

She skipped school every Friday to sit on the steps of the Riksdag and soon became a global success following her first TED talk – which now has more than a million views.

But questions have been raised over whether the teenager’s rise to global fame is actually a carefully laid out public relations campaign.

The school strike coincided with the launch of a book about climate change written by her mother, well known opera singer Malena Ernman, according to Swiss magazine Die Weltwoche.

Miss Thunberg denied that the book launch had anything to do with her personal school strike.

What is a General Strike and when was one last held in the UK? 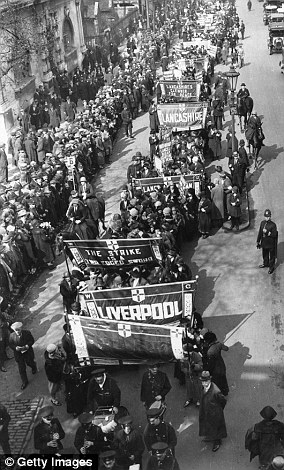 Demonstrators marching during the General Strike of 1926

A General Strike is when unions representing workers across the economy take coordinated action.

But such tactics are illegal and many left-wingers say they are counterproductive.

The last time a general strike happened was 1926, in solidarity with around a million coal miners who were in dispute with owners who wanted them to work longer hours for less money.

Large numbers of people joined the strike including bus, rail and dock workers, crippling the country and limiting food supplied.

The action came against a backdrop of post-war economic turmoil and the spread of communism.

The armed forces mobilised to escort and protect food lorries, and volunteers were used to operate buses and trains.

After nine days, the TUC called off the strike without any concessions made to the miners’ case.

Some strikers pressed on but slowed the action ebbed away.

The act was repealed under Labour in 1946, but in the 1980s the Thatcher government reintroduced the ban.