Climate change will cause waves of migration into Britain, says former head of MI5

Climate change will trigger migration to the UK that will make current, conflict-driven levels seem like ‘nothing’, the former head of MI5 has warned.

This will be the result of migrants fleeing their homes as they become ‘uninhabitable’ from extreme weather.

Baroness Eliza Manningham-Buller, who was director general of the intelligence agency from 2002 to 2007, spoke at a National Farmers’ Union lecture on Monday.

She discussed how climate change directly threatens food security in Britain, and the potential migrant influx should be a ‘strong reason’ to address it.

Baroness Eliza Manningham-Buller, who was director general of the intelligence agency from 2002 to 2007, spoke at a National Farmers’ Union lecture on Monday

Heatwaves ‘beyond human limits’ will make parts of the world uninhabitable within decades, UN warns

Heatwaves will become so extreme in certain regions of the world within decades that human life there will be unsustainable, a new study has warned.

Extreme temperatures are predicted to ‘exceed human physiological and social limits’ in the Sahel, the Horn of Africa and south and southwest Asia.

The report was released by the United Nations and Red Cross, and said these events will trigger ‘large-scale suffering and loss of life’ in these areas.

She said: ‘The migration we have seen so far as a result of a conflict in some cases or economic migration will be as nothing compared to the migration which the northern countries in the hemisphere are going to see as people move away from areas that are uninhabitable.

‘And that is a very strong reason to address the climate issue. Because if we don’t address it fully and properly, this is going to happen.’

A report from the World Bank published last year predicted that 216 million people could be forced to migrate to other parts of their country by 2050 due to rising sea levels, water scarcity and declining crop productivity.

Worldwide, farmers are growing 20 percent less food than they would be if environmental conditions were the same as they were in the 1960s.

Yields of potatoes, onions, carrots and lettuce suffered due to this year’s record-breaking heat in the UK.

While the government plans for the country to reach net-zero carbon emissions by 2050, Baroness Manningham-Buller is sceptical this will be achieved.

She said at the 2022 Henry Plumb Memorial Lecture that the world is becoming ‘so polarised’ that we won’t be able to come together as necessary to meet the targets. 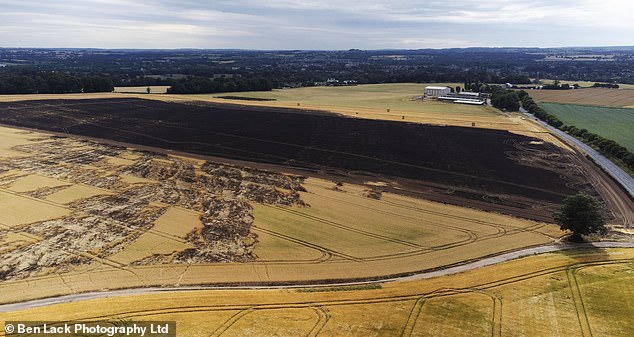 Yields of potatoes, onions, carrots and lettuce suffered due to this year’s record-breaking heat in the UK. Pictured: Scorched crops in Ripon, North Yorkshire after a wildfire in July 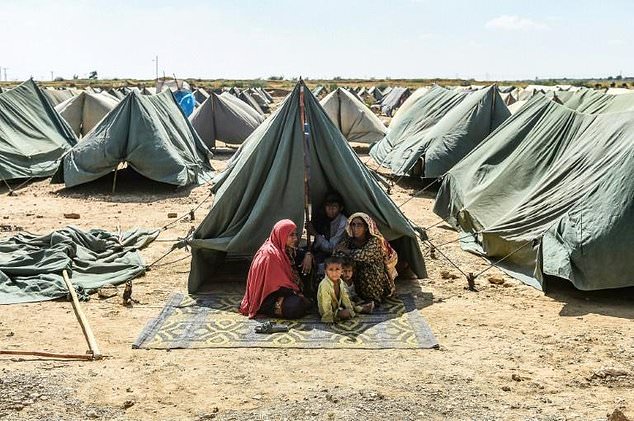 Migration to the UK will be the result of people leaving their home nations as they become ‘uninhabitable’ from extreme weather. Pictured: Catastrophic floods in Pakistan left people homeless earlier this year

In 2014, scientists warned how climate change could result in conflicts and wars breaking out as growing populations fight over dwindling resources and food prices fluctuate.

During her talk, Baroness Manningham-Buller said that the war in Ukraine demonstrates the importance of insulating Britain from shocks to the global food system.

Since Russia invaded Ukraine in February, food prices have been escalating as supplies are squeezed, including grain and fertilisers.

By the end of last month, nearly all bread and pasta items had risen in inflation by double digits in the UK, with some up by as much as 63.6 per cent.

Baroness Manningham-Buller said: ‘I believe that food is part of our critical national security, including the essential workers that grow it and harvest it, the farmers that produce our crops, meat, vegetables, fruit and even wine. 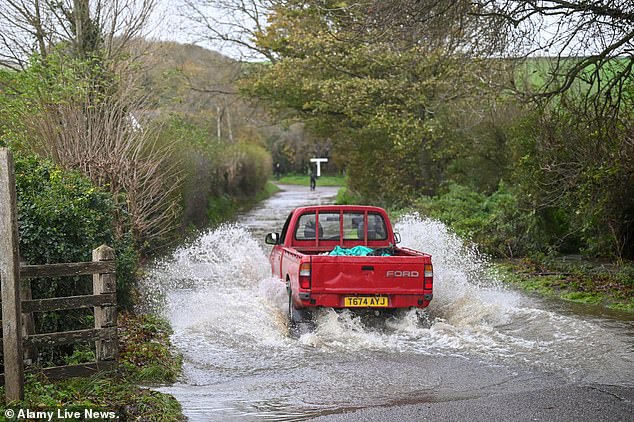 Worldwide, farmers are growing 20 percent less food than they would be if environmental conditions were the same as they were in the 1960s. Pictured: A farm vehicle drives through a flooded road in East Sussex earlier this month

‘British farmers are under immense pressure. The doubling of fertiliser prices, soaring energy costs, shortages of seasonal workers and apprehension about trade deals are all impacting the farmers that produce our food and we urgently need policy to address this.

‘Unless we pay serious and thorough attention to our food security, we risk being increasingly subject to global shocks.

‘We need to acknowledge that we should produce as much of our own food as possible and to be able to export what we can, both for growth in the UK economy and to help feed the world.’

NFU President Minette Batters added: ‘As British farmers we produce both climate-friendly food and renewable energy and we want to deliver more.

‘For this to happen, we need our government to honour the commitments made by Prime Minister Rishi Sunak to set a target for our nation’s food security, with a statutory duty to report on domestic food levels.’

Heatwaves driven by human-caused climate change have cost the global economy $16 trillion (£14 trillion) since the 1990s, a study has calculated.

This is due to the effects of high temperatures on human health, productivity and agricultural output.

It also revealed that the world’s poorest and lowest carbon-emitting nations have suffered the largest economic blows, such as those in tropics.

Researchers at Dartmouth College in New Hampshire, USA combined economic data with the average temperature for the hottest five-day period for each global region.

They found that, from 1992 to 2013, heatwaves have routinely coincided with variations in economic growth, which differ in high and low income regions.

‘Almost no country on Earth has benefited from the extreme heat that has occurred,’ said senior author Justin Mankin, an assistant professor of geography.