Clint Eastwood, the Oscar-winning actor and director, will film in Georgia this summer despite talk of a boycott by Hollywood

While major Hollywood studios consider boycotting Georgia over a controversial new abortion law, Clint Eastwood will produce and direct a movie in the Peach State about the bombing of the 1996 Summer Olympics in Atlanta.

The 89-year-old Dirty Harry legend is in line to oversee production of The Ballad of Richard Jewell.

The filming of the movie is scheduled to begin sometime this summer, according to WXIA-TV.

Jewell worked as a security guard at Atlanta’s Centennial Olympic Park at the time of the July 27 bombing, which killed one person, injured more than 100 and marred the 1996 Olympics.

Jewell was at first praised because he discovered a suspicious knapsack that contained the pipe bomb and helped evacuate people from the park.

But he was later named as a chief suspect by the FBI on grounds that he may have acted as a lone bomber. 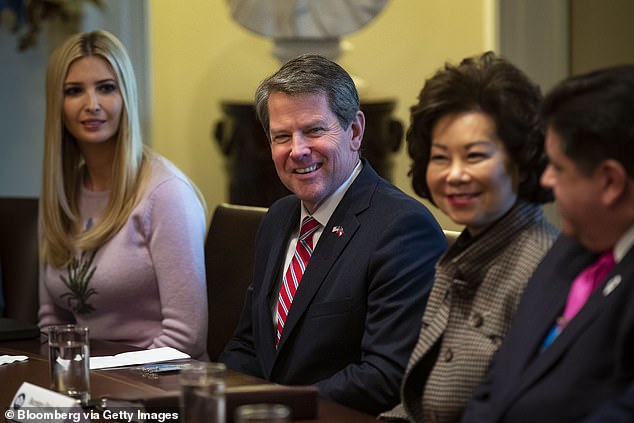 Jewell, who sued some media outlets for defamation after he was cleared, worked as a law enforcement officer after the episode.

Eric Robert Rudolph pleaded guilty to the bombing in 2005 and is serving life in prison for it and other attacks.

Jewell, who had diabetes and kidney ailments, died in August 2007. He was 44 years old.

The actors who are scheduled to star in the movie include Kathy Bates, Olivia Wilde, Jon Hamm, and Sam Rockwell.

Unlike some of his colleagues in the industry, Eastwood does not appear to be signing on to a Hollywood boycott of Georgia.

Eastwood, a registered Republican who considers himself libertarian, has not been shy about making his political views known.

In 2012, he endorsed Mitt Romney in his failed bid to defeat the incumbent, then-President Barack Obama. 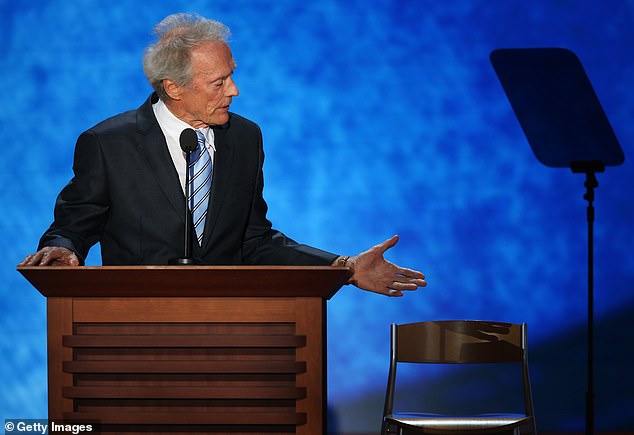 Eastwood, a registered Republican, has not been shy about making his political views known. In 2012, he endorsed Mitt Romney in his failed bid to defeat the incumbent, then-President Barack Obama. Eastwood famously gave a speech to an empty chair, which was meant to represent Obama, at the 2012 Republican National Convention in Tampa

Eastwood famously gave a speech to an empty chair, which was meant to represent Obama, at the 2012 Republican National Convention in Tampa.

He has also been quoted as saying that he preferred Donald Trump over Hillary Clinton in 2016.

In 1986, Eastwood was elected mayor of the small California town of Carmel-by-the-Sea.

Eastwood is no stranger to filming in Georgia. Last year, he directed and starred in The Mule, a story about an elderly drug courier who was working for the Sinaloa cartel.

Most of the filming for that movie took place in Georgia.

In recent weeks, the film and television industry has been up in arms about Georgia’s highly restrictive new anti-abortion law.

Governor Brian Kemp signed Georgia’s abortion ban into law in May, and it is scheduled to take effect in January 2020, though the ACLU of Georgia and other abortion rights activists have pledged to challenge the legislation.

Georgia’s law makes it a crime for a doctor to perform an abortion after a ‘fetal heartbeat’ can be detected, which can occur as early as six weeks after conception. 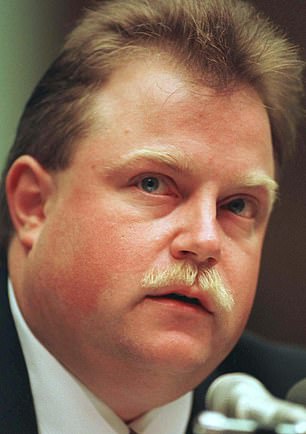 Eastwood’s next film will be a biopic about Richard Jewell, the security guard who was falsely blamed for the bombing at the 1996 Summer Olympics in Atlanta

At that point in a pregnancy, many women don’t yet know they are pregnant.

Since that means women who wish to seek an abortion may miss the opportunity to do so based on that timetable, the ban is being referred to as a near total abortion ban.

Abortion laws similar to Georgia’s legislation – and even more restrictive in the case of Alabama – have passed or are being considered in many states.

However, Georgia has received most attention from the television and movie industry because it has become a second home for entertainment.

Georgia has become known as the ‘Hollywood of the South’ due to its 30 percent tax rebate for film and TV production – and has grown that reputation into a $9.5billion industry, according to Atlanta magazine.

While the state has saved production houses plenty of money, Georgia stands to lose a significant amount if the law takes effect and the entertainment industry moves elsewhere.

The state brings in approximately $2.7billion each year in direct revenue from filming, according to Variety.

Earlier this month, AMC Networks, which currently films economic powerhouse ‘The Walking Dead’ in Georgia, says it will ‘reevaluate’ its role in the state’s nearly $10billion entertainment industry if a new abortion law goes into effect.

A statement from AMC calls abortion legislation signed into law on May 7 ‘highly restrictive’ and says it will be closely watching what’s likely to be ‘a long and complicated fight’ over the law. 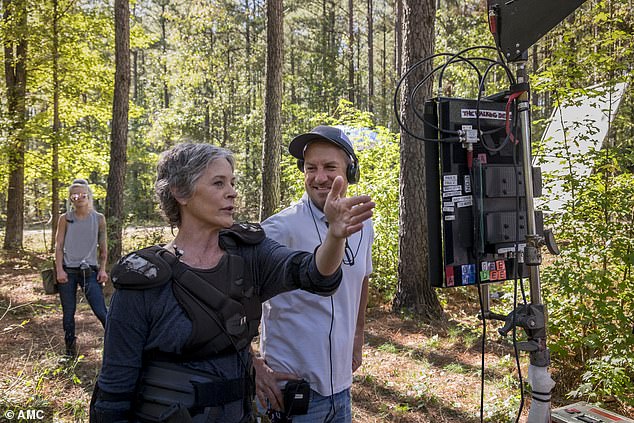 AMC Networks has joined Netflix and Walt Disney is saying they would rethink shooting television and film projects, including ‘The Walking Dead,’ in Georgia if its abortion ban takes effect. Melissa McBride who plays Carol Peletier on The Walking Dead is pictured in a candid, behind-the-scenes moment on set in Georgia from episode 14 in season 8

AMC has joined several other TV and film companies expressing concerns over the legislation, though no major studio has actually pulled out of the state.

If AMC and and others stop filming in the state, nearly 100,000 jobs could be lost along with billions of dollars in revenue, not to mention all of the tourism dollars that come with fans visiting the locations where films and shows are shot.

THE ‘HEARTBEAT BILL’ MOVEMENT: WHICH STATES ARE BRINGING THE MEASURES

STATES WHOSE BILLS HAVE BEEN BLOCKED BY COURTS

STATES THAT ARE CONSIDERING IT

Netflix was the first major Hollywood player to speak out against the Georgia law.

‘We have many women working on productions in Georgia, whose rights, along with millions of others, will be severely restricted by this law,’ Netflix chief content officer Ted Sarandos told Variety in a statement published on May 28.

‘It’s why we will work with the ACLU and others to fight it in court. Given the legislation has not yet been implemented, we’ll continue to film there, while also supporting partners and artists who choose not to. Should it ever come into effect, we’d rethink our entire investment in Georgia.’

Soon after, Disney and WarnerMedia, the parent company of HBO and Warner Bros., shared similar doubt about their future in the state if the law makes it to January and is eventually enforced.

Disney CEO Bob Iger said it would be ‘very difficult’ to film in Georgia if the law goes into effect.

‘I think many people who work for us will not want to work there, and we will have to heed their wishes in that regard,’ he said. ‘Right now we are watching it very carefully.’

Before those heavy hitters came forward, individual projects had already pledged to withdraw if the law took effect.

At least two shoots which had planned to film in Georgia but had not yet started production have decided to take their works elsewhere.

A forthcoming Amazon series called ‘The Power’ had been scouting locations in Savannah but has moved to other options.

Director Reed Morano, who has worked on the Handmaid’s Tale, told Time, ‘There is no way we would ever bring our money to that state by shooting there.’

A Kristen Wiig filmed titled ‘Barb and Star Go to Vista Del Mar’ has also reportedly declined to shoot in Georgia following the signing of the abortion ban.

Lawmakers opposed to the abortion ban in Georgia have applauded networks and individual projects that have voiced their concerns but said they will remain in the state until the law takes effect.

‘I understand and appreciate those who have advocated for boycott, but you can’t change the policy if you leave the state,’ Georgia Senator Jen Jordan said. 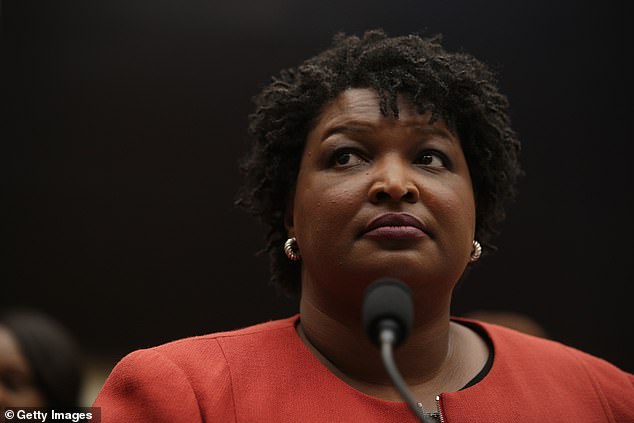 Stacey Abrams, the Democrat who narrowly lost to Kemp in November’s gubernatorial election, has encouraged Hollywood studios to keep shooting films in Georgia

‘They’ve taken the right approach. They’re bringing attention to the issue, but they’re also saying this isn’t a good law and it isn’t good policy, but we want to work with you. I hope it gives us ammunition to stop bad legislation.’

Some actors have noted that the ability to leave comes from a place of privilege and have urged people who want to effect change to ‘stay and fight.’

The HBO series Lovecraft County will still film in the state for now, JJ Abrams and Jordan Peele said, but the episodic fees will be donated to the ACLU of Georgia and Fair Fight Georgia.

Howard also promised to donate to the ACLU, along with Fear Street producers Peter Chernin and Jenno Topping.

Stacey Abrams, the Democrat who narrowly lost to Kemp in November’s gubernatorial election, has encouraged Hollywood studios to keep shooting films in Georgia.