CNN anchor Kate Bouldan dragged disgraced Los Angeles Councilman Kevin de León in an interview on Tuesday, relentlessly asking him why he has not yet resigned.

The Democrat has been facing calls to step down since it was revealed in October that he and two of his fellow Latino councilmembers schemed to protect their political clout by redrawing council districts at the expense of blacks and renters.

As part of the secretly-recorded conversation, de León could be heard comparing one of his fellow councilmember’s black son’s to an ‘accessory’ like a ‘luxury handbag.’

He has since apologized for his comments, claiming they are not who he is as a person and telling Bouldan on Tuesday that he has done a lot of ‘reflection’ following the release of the tape.

But that has done little to assuage Los Angeles residents, who have been pushing for de León to resign, after the other members involved in the conversation have all stepped down or at least signaled their intent to resign.

The councilman even got into an altercation with one of the protestors at a Christmas event just last week.

CNN anchor Kate Bouldan dragged disgraced Los Angeles Councilman Kevin de León in an interview on Tuesday, relentlessly asking him why he has not yet resigned 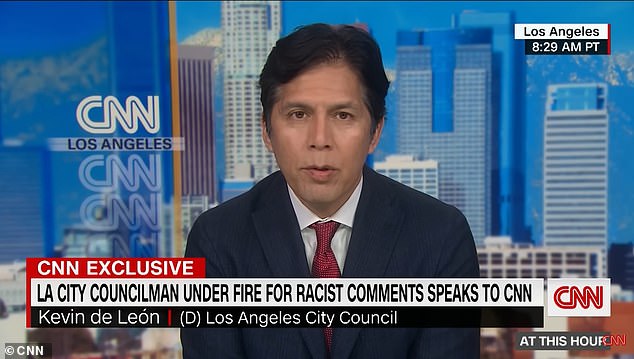 De León, though, has refused to resign in the wake of the recordings, and even participated in the city council’s meeting on Friday for the first time since October.

‘I came on Friday to get back to work,’ de León told Bouldan on Tuesday.

But Bouldan questioned whether he only returned to his seat because the Los Angeles’ city charter states that a council seat becomes vacant if an officeholder is absent without approval for more than 60 days — a deadline de León was fast approaching.

She therefore questioned whether the disgraced councilman only showed up on Friday to avoid a fight over his seat, a notion de León denied.

‘Let me be clear: 90 percent to 95 percent of the work for the city council in Los Angeles has to do with city departments and city heads, and that is what I’ve been exactly doing with me and my staff, who’ve been wonderful during this very difficult time,’ de León continued.

‘We’ve received a tremendous amount of support from the community, and this is why I continue to serve.’

That is when the CNN anchor pointed out that everyone else involved in the racism scandal has either resigned or was planning to leave.

She then asked de León point blank: ‘Why are you not resigning?’ 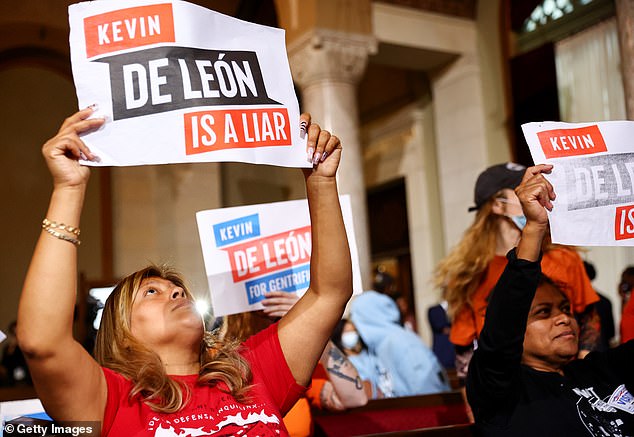 ‘I know you say you still have work to do,’ she told the councilman.

‘But other members, the points that the councilmembers are making still today about the whole thing is that they say that the city cannot heal if you are still there, and one member saying that your continued presence on the council is causing severe “ongoing harm.”‘

De León responded by saying that ‘people make the decision’ in a democracy rather than ‘folks in the peanut gallery or political pundits.’

He then went onto note that ‘tens of millions of Americans go to work every single day with folks they don’t like.’

The councilmember then groveled, saying he’s ‘profoundly sorry’ for ‘not standing up in the meting when the racist comments were being made.’

But Bouldan was quick to note that de León actually participated in the conversation himself.

‘It wasn’t just that you didn’t stand up, you also took part in the communication,’ she said. ‘I mean, in it you said — you compared the young black child of a fellow councilman’s child to being an accessory, like a luxury handbag.’

At that point, de León suggested there was more ‘context’ to the conversation, while bemoaning that the media didn’t realize how nuanced his comments were — leading Bouldan to play the audio.

She said afterwards: ‘You have said in subsequent interviews, and you say you’re profoundly sorry, that you failed in leadership and accept responsibility.

‘What exactly was the mistake that you made that you’re apologizing for?’

De León, in turn, said he ‘shouldn’t have said what I said’ and asserted he was ‘inartfully criticizing Councilwoman Nury Martinez for her luxury handbags.’

He went on to say he apologized to Councilman Bonin and his family for his racist remarks. 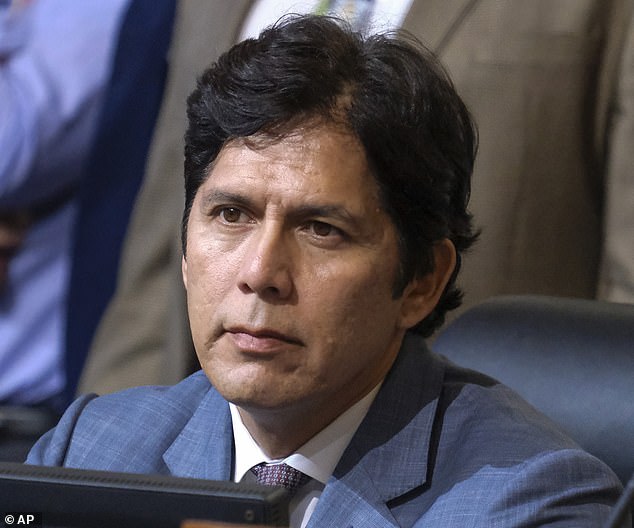 But before the interview was over, Bouldan asked him once again about his racist comments.

‘Before I let you go, I do want to ask you because you’re on tape making fun of a colleague’s young black child when there is a racist conversation that is occurring,’ she said.

‘That colleague is a fellow Democrat [who] now still considers you, in his words, a “vile racist” is how he puts it.

‘You’ve been absent from the committee since October,’ she continued. ‘The council meetings have been shut down multiple times over this scandal due to committee members [and] community members protesting and the committee not being able to operate the council.

‘And then last week, you got into a physical fight, no matter who started it, and I know there is video that has come out to show how serious the altercation did become, but you got into a fight on Friday with an activist.

‘If this was anyone else, would you say that the person I just described is serving their community well?’ she finally asked him.

De León responded: ‘That is not the person who I am’ before going on to tout his accomplishments in office.

He concluded: ‘I will continue to serve my voters – they will make the ultimate decision.’ 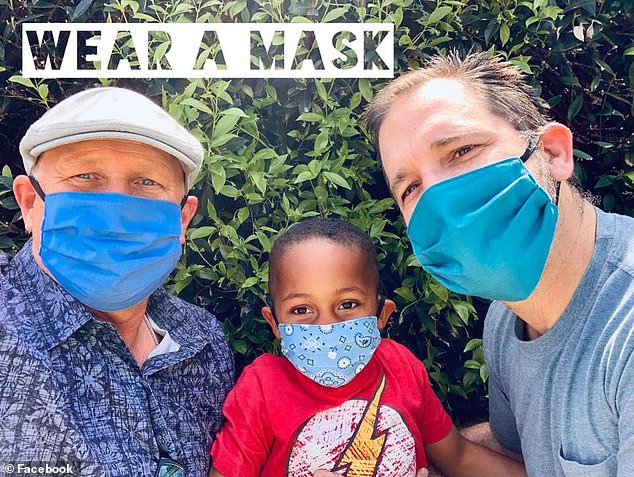 Mike Bonin (left) and his partner Sean Arian (far right) with their adoptive son (center), whom de León criticized as being like an ‘accessory’

It remains unclear who released the tape and why. It was released on the website Reddit just weeks before the November midterm elections.

But over the course of the hourlong meeting, de León, former council President Nury Martinez and Councilman Gil Cedillo made offensive remarks about immigrants from the Mexican state of Oaxaca, Jews, Armenians and other groups.

The Los Angeles Police Department is now investigating whether the recording was made illegally – under California law, all parties must consent to the recording of a private conversation or phone call.

Separately, the state is investigating how the council districts were drawn and whether the process was rigged. Attorney General Rob Bonta, a Democrat, has said his investigation could lead to civil liability or criminal charges, depending on what is found.

Bonta said that his office notified the city of Los Angeles and the Los Angeles County Federation of Labor, where the meeting took place, to preserve evidence, a routine step in an investigation.

Martinez had since resigned following the release of the tape earlier this month, along with a powerful labor leader, Ron Herrera, who also attended the meeting. 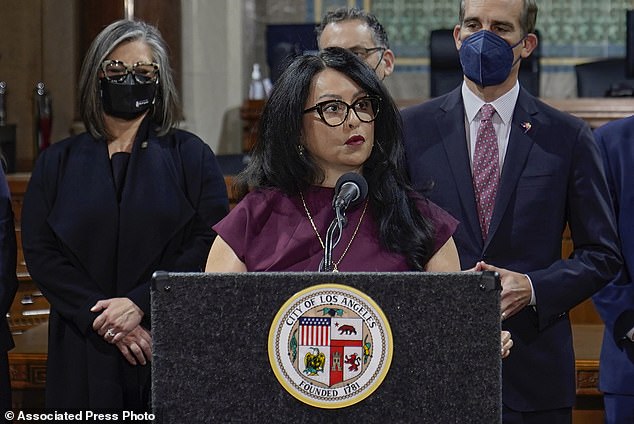 In the aftermath, the Los Angeles City Council rebuked de León as well as another member of the council and its former president for the recording.

The 12-0 vote to censure former council President Nury Martinez and Councilmen Gil Cedillo and Kevin de León represented the strongest step the council can take to publicly reprimand them.

The councilmembers were involved in a secretly recorded 2021 meeting – which is now under investigation for potentially being recorded illegally – laced with crude, bigoted comments about Councilman Mike Bonin’s adoptive son.

The council cannot expel members – it can only suspend a member when criminal charges are pending.

While a censure is largely symbolic, it added new weight to the pressure coming from across the political spectrum for Cedillo and de León to resign 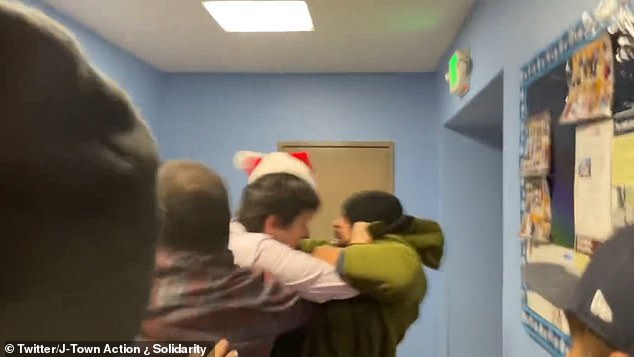 Just hours after de León returned to his city council position on Friday, he attacked a protester 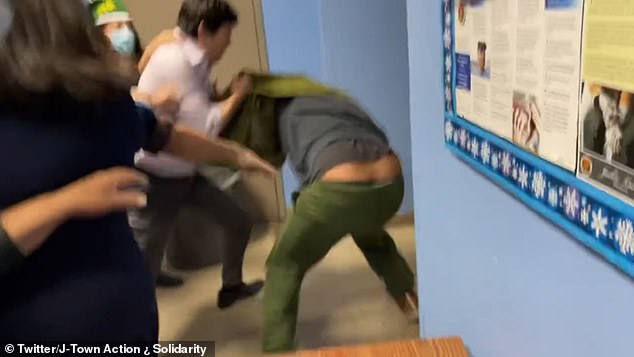 De León’s spokesman, Pete Brown, said that the activists were trying to provoke him when they assaulted him at a Christmas tree lighting

But de León has continued to serve in office, appearing at a city council meeting on Friday for the first time in nearly two months.

Three council members walked out after de León showed up, including Mike Bonin, whose black son was called a ‘monkey’ by former council President Nury Martinez in a meeting that de Leon attended last year.

Just a few hours later, the disgraced councilman was caught on video attacking an activist at a Christmas tree lighting event.

The video, posted by progressive group roots Action, shows de León fighting with a man in a hallway.

As de León walks through the hall, he hears calls of ‘Resign, Kevin!’ as he’s surrounded by protesters, including one who calls him a racist.

He then appears to push Jason Reedy – a local organizer with the People’s City Council, a left wing group that describes itself as an ‘abolitionist, anti-capitalist and anti-imperialist’ – as he moves through a door.

Once through, the two men are face-to-face, with Reedy holding his hands above de León’s head.

De Leon, seemingly backed into a corner, then appears to push Reedy away to the point of taking him to the opposite wall of the hallway where he pushes him down. The councilmember then grabs Reedy and appears to push him further down the hallway.

De León’s spokesman, Pete Brown, said that the activists were trying to provoke him when they assaulted him.

No arrests have been made and police are still investigating after being unable to get to the scene of the fight in time, according to Fox News.

Police said the incident took place at around 6:30 p.m. Friday but that everyone involved had fled before authorities could get there.

Shakeer Rahman, an attorney who represents Jason Reedy, one of the alleged victims, said: ‘Kevin de León is a disgrace. Video footage clearly shows him and his supporters initiating this assault while Mr. Reedy stands with his hands up.

‘Not only has Kevin de León lost all political legitimacy, his claims that he was the one attacked here simply underscores how he’s lost touch with reality.’

De León later said he was the one attacked, not the activists, in a statement: ‘This evening a staff member, volunteer, and I were violently and physically assaulted by self-proclaimed activists at a community holiday event to the dismay of a multitude of families and children who were there to celebrate a Christmas tree lighting and to receive toys and food.’