An East Hampton-dwelling Washington Post journalist wished boils on a CNN writer who blasted her for saying that everyone she interacts with wears an N95 mask.

Hannah Selinger and Rebecca Bodenheimer squabbled for all to see on Saturday over Bodenheimer’s suggestion that Selinger’s continued reliance on the medical-grade face masks smacked of irrational and privileged behavior.

Selinger, who divides her time between ritzy East Hampton and Boxford, Massachusetts, subsequently launched into a multi-tweet attack on Bodenheimer.

And she even suggested that her online foe deserved to develop painful spots for her impertinence.

The spat began with a series of tweets from Bodenheimer which read: ‘If you get on here and say *everyone* you interact with wears an N95, I have no choice but to assume you interact with a very small subset of people – mostly middle/upper class and working from home – and that you get most things delivered to your home by service workers.’

Bodenheimer, who lives in Oakland, continued: ‘That’s simply not the way the vast majority of Americans are living at this point in the pandemic. You’re free to mask as long as you want but what you won’t do is claim to represent the beliefs of a diverse cross-section of the population.’

She concluded her screed by saying: ‘And the reason I know this is that I live in one of the most risk-averse cities in the nation, but also one of the most racially and economically diverse ones. I live hood-adjacent and my spouse is an essential worker who works *in* the hood. I see a wide range of beliefs here.’ 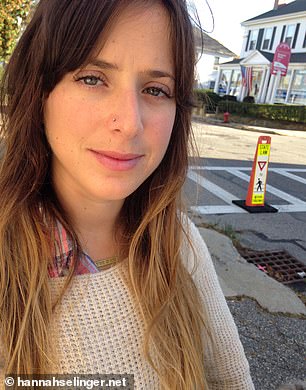 CNN contributor Rebecca Bodenheimer, left, found herself waging cyber battle with Washington Post writer Hannah Selinger, right, after calling out people who brag about strict masking measures and Selinger realized she was the person being talked about 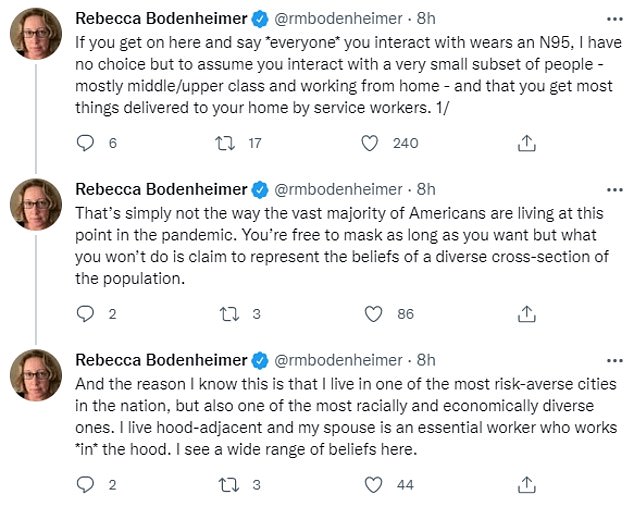 This is the thread from Bodenheimer that kicked off the exchange

But Selinger – who writes for the Washington Post, New York Times and Wall Street Journal quickly lashed Bodenheimer, a freelancer who has worked for CNN, Vice, Politico and The Cut, with a stream of invective.

She quote-tweeted Bodenheimer’s original tweet thread and wrote: ‘Rebecca is tweeting about me, because she’s an anti-masker.’

Bodenheimer admitted her original missive had indeed been referring to Selinger.

She defended herself by saying that she didn’t name Selinger or call her out directly, and that she was just ‘making an observation.’

But that cut little ice with Selinger, who said: ‘The tweet was about me! Of course you were calling me out! don’t be ridiculous. That’s passive-aggressive bullshit.

‘Either say what you’re saying (inaccurately, per our conversation) and own it, and the repercussions, or don’t. 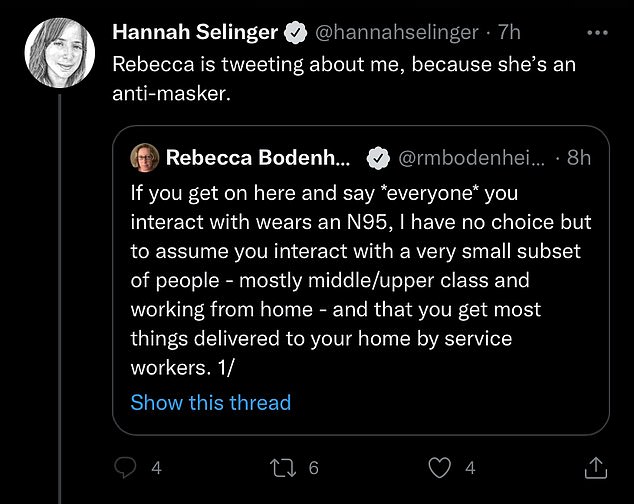 Selinger realized she was the one being spoken about, and issued a cutting response on Twitter 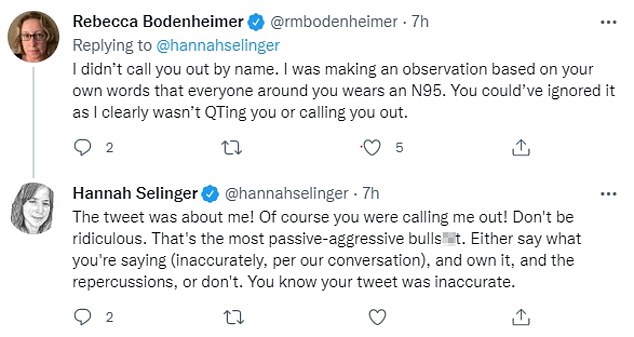 Bodenheimer responded again to dispute Selinger’s claims she was a coward, insisting: ‘I was trying not to have people harass you.’

And she poured fuel on the fire with a further dig at Selinger’s COVID-safety measures, writing: ‘I do know many people aren’t as risk-averse as you and that you shouldn’t assume your beliefs extend to everyone else.’

That further inflamed Selinger, who then queried whether Bodenheimer should continue to tweet at all, given she has followers who went on to ‘harass’ Selinger.

Bodenheimer finally checked out of the cyber battle, telling Selinger she was ‘done.’

That prompted Selinger to respond with a gif of a woman laughing hysterically. 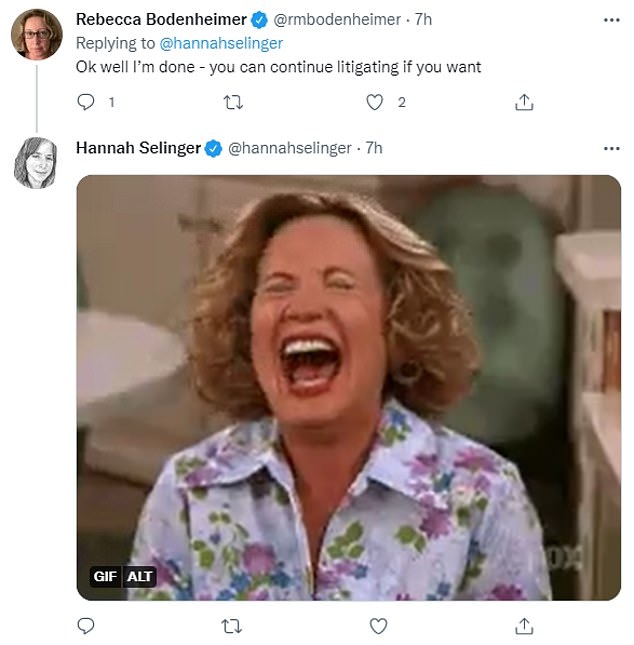 But Selinger decided to have the last word, and suggested she hoped Bodenheimer develops boils on her skin for taking her to task over her approach to masking

Selinger then brought the squabble full-circle with a tweet of her own that didn’t mention anyone directly – but which did appear to wish a painful illness on Bodenheimer.

She wrote: ‘So weird when seemingly rational people turn anti-mask or anti-vaxx. It’s always the ones with feeble, bit-heavy social followings, too, amirite? It’s hard to know what to wish on these folks. Maybe boils?’

The fracas was started earlier in the day after Selinger replied to a previous tweet from Bodenheimer that said masks ultimately made little difference unless they were high-quality.

Selinger wrote: ‘People are pretty much only wearing N95s at this point. A mandate in certain federal circumstances is critical. You can’t expect people to do the right thing on, say, an airplane. They won’t.’

The unseemly fight between the two writers is emblematic of seemingly never-ending tensions over COVID safety measures.

It is also the latest example of well-paid journalists publicly attacking each other online over issues many inflation-battered Americans would deem trivial.

COVID masking and vaccine mandates have largely been lifted across the US as deaths from the virus drop, even though new variants continue to infect and re-infect thousands of Americans. 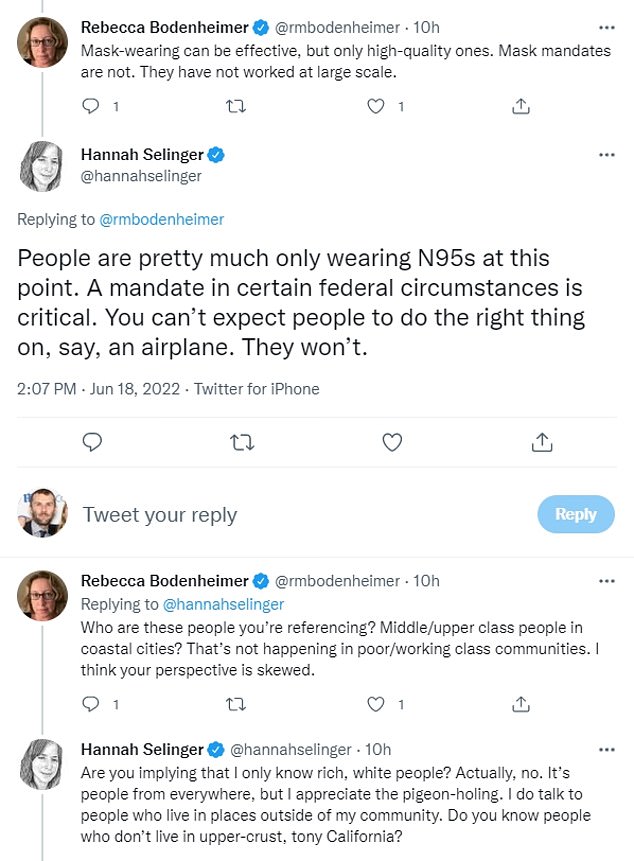 This is part of the exchange that ignited the fight between the two women, and led to Bodenheimer to post her series of tweets about privileged mask wearers

Meanwhile, Washington Post staffer Felicia Sonmez was fired from her job earlier this months after a multi-day rage at male colleague Dave Wiegel after he retweeted a sexist joke saying all women were either bisexual or bipolar.

Wiegel apologized, but Sonmez continued to rant about his behavior, and call for disciplinary action against journalist who defended him.

Other august publications have also been rocked by staffers attacking each other publicly on Twitter – often over issues of social justice.

That has prompted them to warn staff to keep disputes private, with the New York Times also advising its reporters that they can stay off Twitter altogether, if they so wish.