The US Coast Guard has reprimanded an officer in South Carolina for flashing a white supremacy hand sign on live television last year.

The man was formally censured for intentionally using the hand gesture similar to the ‘OK’ sign in Charleston during the emergency response to Hurricane Florence in September.

The Post and Courier reported the Coast Guard officer was in the background of a television shot while Capt. John W. Reed, commander of the Coast Guard Charleston Station, was being interviewed on MSNBC. He flashed the hand sign associated with white supremacy. 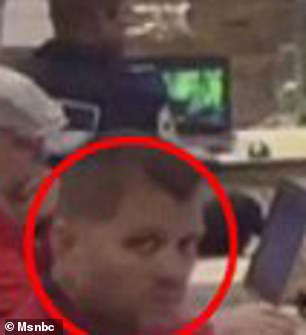 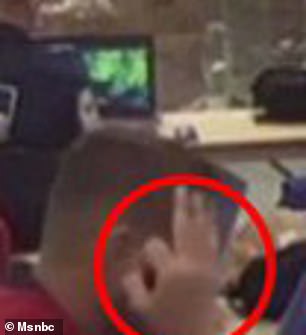 The Coast Guard tweeted that the officer was removed from the emergency response team.

The Coast Guard refused to publicly identify the service member, citing a privacy exemption that applies to personnel and medical files.

But an administrative letter dated October 5 says his actions showed a lack of maturity and an inability to understand the gravity of a weather disaster.

Capt Reed wrote that the member of the hurricane response team was ‘directly cautioned by a Public Affairs Specialist about the controversy surrounding that symbol just prior to the live interview being conducted,’ yet he decided to ‘play a game’ and flash it on live TV.

The incident received national attention and the Coast Guard issued a statement addressing the ‘offensive’ video, saying the person was removed from the emergency response team.

The incident will go on the officer’s permanent record and will be taken into account when being considered for a promotion.

The historic hand sign for OK – touching the forefinger to thumb with other three fingers raised – was adopted by the alt-right and Trump supporters in 2015.

Conservative Viner Pizza Party Ben and the alt-right’s former pin-up boy Milo Yiannopoulos began making the gesture at various campaign events for Trump in the lead up to the 2016 election.

The symbol has since come to stand for white supremacy. It is sometimes used by members of the alt-right and white supremacists to signal to others they suspect are in the movement without alerting ‘normal’ people.

Nazis and other extremist groups have often used formerly  ‘innocent’ innocuous symbols as signifiers, such as the ancient religious icon of the swastika – which is now intrinsically linked with the party.

Such seemingly innocuous gestures also allow them plausible deniability and many allegations of the symbol being used as a white supremacist signifier, are met with retorts about the ‘hysterical’ or overly politically correct left.

This was used to effect in a February 2017 post on 4chan, a discussion board notorious for its ties to the alt-right, which claimed the gesture’s association with white supremacy had been a 4chan hoax operation to trick liberals and the news media into believing it was a racist symbol to show they would believe anything could be racist.

However, the post came more than a year after the gesture was associated with white supremacists and seems to be an attempt to mislead the public about the symbol’s origins.

But authorities are cracking down on the racist symbol and just last year, several members of a police force in Jasper, Alabama were  suspended for flashing the OK sign in a group photo.

The gesture was made on MSNBC’s Live with Ali Velshi on September 14 while Captain Reed was giving an update on Hurricane Florence and the response efforts in Charleston, South Carolina.

As Reed talked with Velshi, a Coast Guard member in a red shirt sitting at a table behind the captain is seen in the video quickly giving the ‘OK’ sign, a once innocuous hand signal that is now widely associated with the alt-right.

Many people took to Twitter shortly after the segment was aired, demanding that the Coast Guard was fired.

‘”Removed from response?” I hope this is just the beginning of serious disciplinary action and termination!’ Twitter user Dawn Able posted.

‘What does this mean? Is he just out of camera shot now? IS he out “helping” black and brown people? Or just his own? Please be clearer,’ a Twitter user who goes by the name Don’Beababy wrote.

Twitter user Kitty wrote: ‘Fire him. or you are also complicit’.

But it appears that he has retained his job at the Coast Guard. 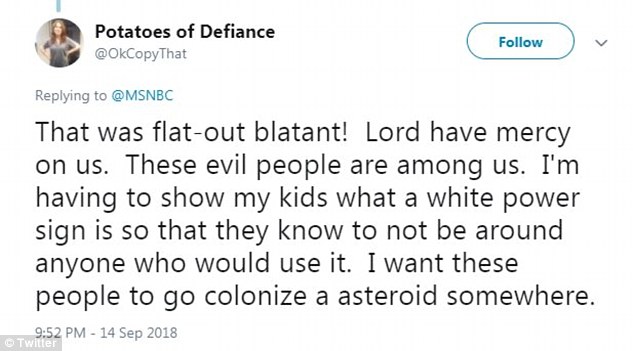