Daniel Higham, 26, (pictured) has now been jailed for seven years and four months with a further four years on licence after pleading guilty to rape at Bolton Crown Court

A cocaine and booze-fuelled rapist forced his victim to have sex after telling her ‘come on, I’ve bought you drinks all evening’, a court has heard.

Daniel Higham, 26, met his 20-year-old victim via social media and on August 13 the pair went for a night out in Bolton town centre.

A court heard how Higham took the woman back to his flat and refused to let her leave, eventually raping her inside the building.

The terrified young woman only managed to escape her attacker by knocking on a stranger’s door, barging inside and telling the householder: ‘He’s a rapist, call the police.’

Higham has now been jailed for seven years and four months with a further four years on licence after pleading guilty to rape at Bolton Crown Court.

The Honorary Recorder of Bolton, Judge Martin Walsh ruled that the extended sentence must be passed because Higham poses a substantial risk to women.

Higham will not be eligible to apply for parole until he has served two thirds of the prison term.

The judge told him: ‘This was a brutal and terrifying attack upon a vulnerable victim who was alone with you.’

The court heard how Higham, of Bolton, Greater Manchester, had taken the woman back to his flat after a night out.

David Lees, prosecuting, told how, after drinking at several pubs and taking some cocaine they headed back to his flat in a taxi at 5am to get more beer. 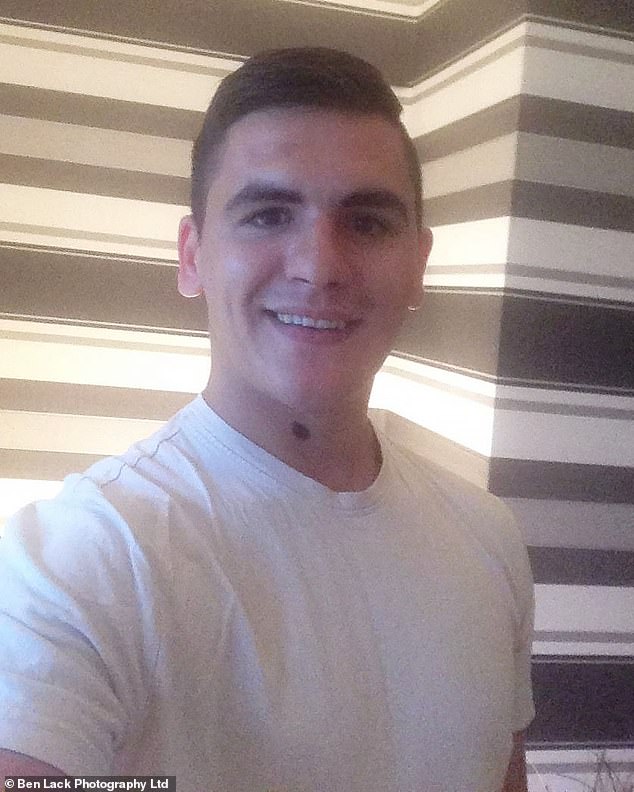 The court heard how Higham (pictured), of Bolton, Greater Manchester, had taken the woman back to his flat after a night out. During a 30 minute ordeal Higham told his victim he had done an armed robbery so he ‘wasn’t bothered what happened to her’

He added that the victim was very drunk and Higham told her he wanted to have sex with her.

When she refused he complained that he had bought her drinks all night and told her he was going to rape her.

‘Things moved quite rapidly to a physical confrontation,’ said Mr Lees, who said that, as she tried to walk off, he grabbed her and pushed her onto the floor.

‘At one point she was lying on the floor in a sort of ball and he kicked her in the ribs. She started crying, ‘please stop’.’

Her attempts to get out of the flat failed and then she realised he had removed his trousers.

The victim begged him: ‘Please don’t do this’ but he replied, ‘If you don’t do it I’ll make you. It’s going to happen anyway.’

Higham grabbed her round the throat and she managed to throw a glass at him, cutting his chest.

‘But that did not stop him,’ said Mr Lees, who added that the victim was scared that Higham would kill her.

During the 30 minute ordeal Higham told her he had done an armed robbery so he ‘wasn’t bothered what happened to her’.

After the rape Higham said he wanted to go to the shop to get more drinks.

‘She agreed thinking that if she got out of the house it would give her a chance to get away,’ said Mr Lees.

‘It was 7.30am and she saw a light and a television on in someone’s room and so she walked over, telling Mr Higham it was her cousin’s.

‘As soon as the door was opened she barged her way in and said, ‘he’s a rapist, ring the police.’

In a victim statement the woman told the court: ‘It’s on my mind every second of every day. I feel like I can’t trust anyone.

‘I don’t know when I will ever be able to deal his actions or stop feeling like how I have been feeling since.

‘Although my cuts and bruises have healed by mind and my memories haunt me.’

The court heard that Higham has previous convictions for violence, including for attacking a former partner, who he kicked down the stairs, fracturing her vertebrae, ankle and nose.

Virginia Hayton, defending, said: ‘The defendant appreciates the serious position he is in.’

She added that he is remorseful and knows that he needs to change.

‘He knows that unless he alters his behaviour when he is released, that he will find himself behaving in similar ways in the future.’

Commenting on pre-sentence reports prepared about Higham, Judge Walsh said: ‘I accept that you now display remorse for what you did to your victim.