Cody Simpson will cap his stunning return to swimming by representing Australia at the Commonwealth Games, but will not take part in the World Championships later this year.

At the end of one of the most controversial weeks in Australian swimming, the national team selectors picked Simpson in the team for the butterfly events for the Commonwealth games in Birmingham this winter.

Simpson, who is best known for his successful music career and dating Miley Cyrus, will compete in the butterfly events but has missed out on a spot for the worlds.

Cody Simpson will represent Australia at the Commonwealth Games in July 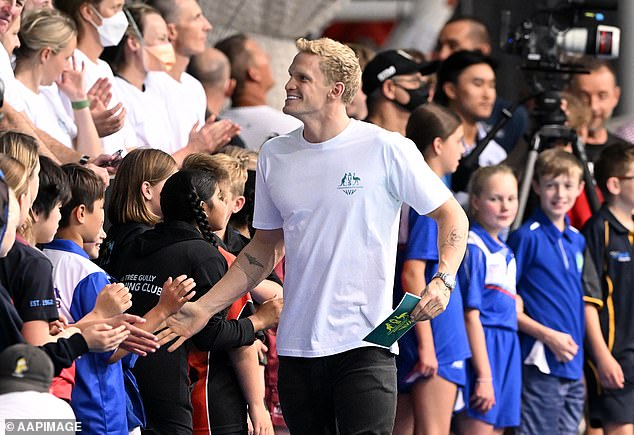 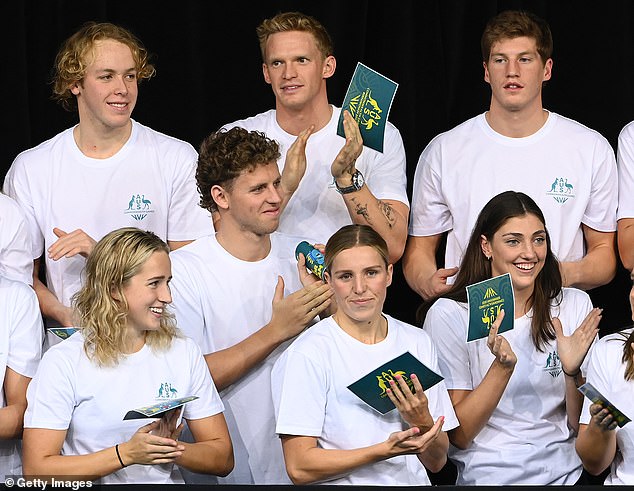 Simpson (middle) joined his teammates on stage after being selected for the Commonwealth Games, which will take place in Birmingham from July 28

The 25-year-old Queenslander looked to have booked himself a spot at the worlds in the 100m butterfly after finishing third in the event at the national swimming championships in Adelaide behind Kyle Chalmers and winner Matt Temple.

Australia can only field two representatives and Simpson was expected to make it because Chalmers would drop out due to his busy schedule and need to preserve his body after picking up serious injuries and undergoing surgery.

However, Chalmers subsequently changed his mind, insisting he will compete in the 100m butterfly at the worlds in Budapest next month.

Chalmers was a shock absentee at from Sunday’s ceremony announcing the Australian swim team, citing the need of taking break from the spotlight for mental health reasons. 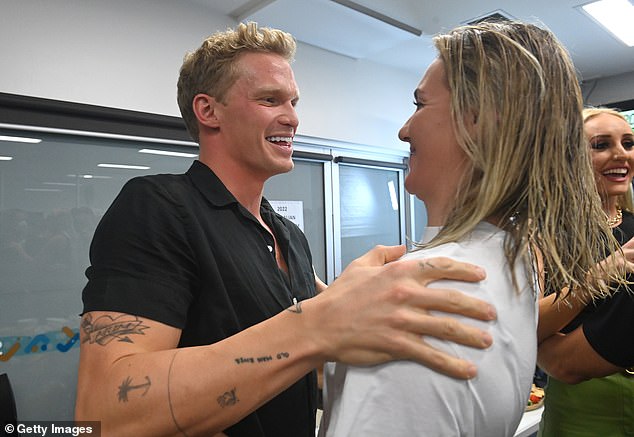 Simpson is congratulated by Ariarne Titmus (right), who set a new world record in the women’s 400m freestyle earlier on Sunday night 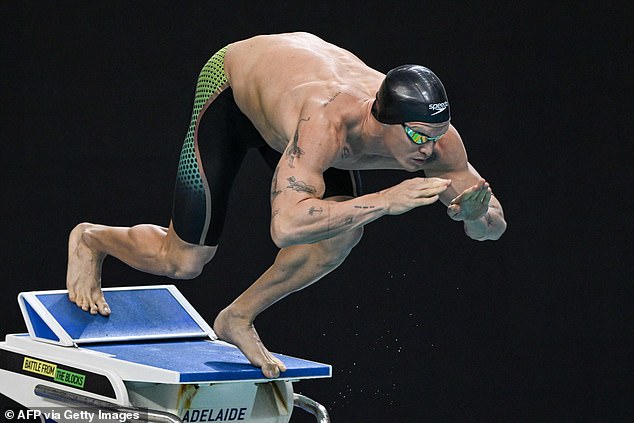 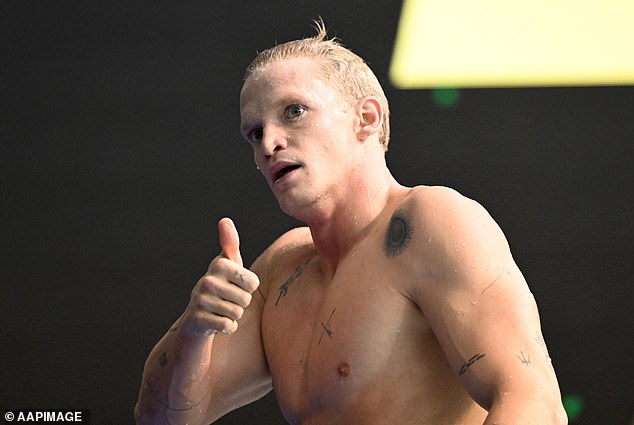 ‘The last few days have been difficult for Kyle, both mentally and emotionally,’ a Swimming Australia spokesman said.

‘He believes it’s in the best interest of his mental health to remain in Port Lincoln with his family for the next few days. Swimming Australia fully supports his decision.’

Chalmers and Simpson have dominated the headlines, since the former backflipped on his decision to skip the 100m butterfly at the world championships, ending the latter’s hopes of competing in the event.

The move immediately led to speculation Chalmers could have been motivated by the fact Simpson is dating his ex, swimming sensation Emma McKeon. 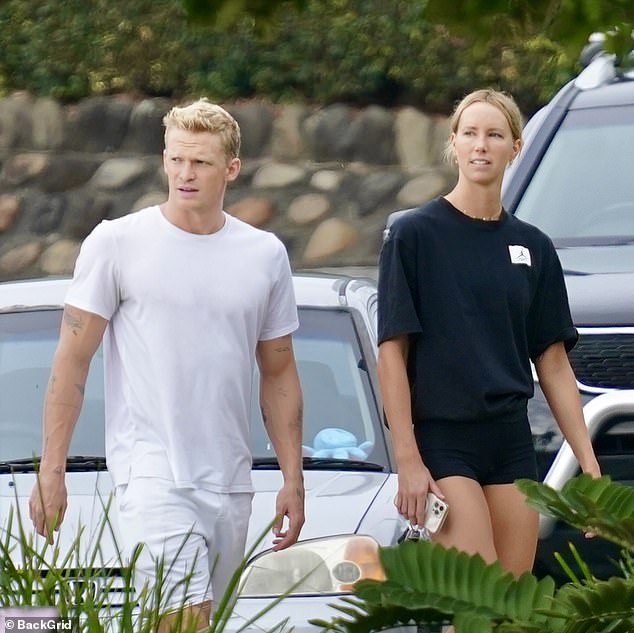 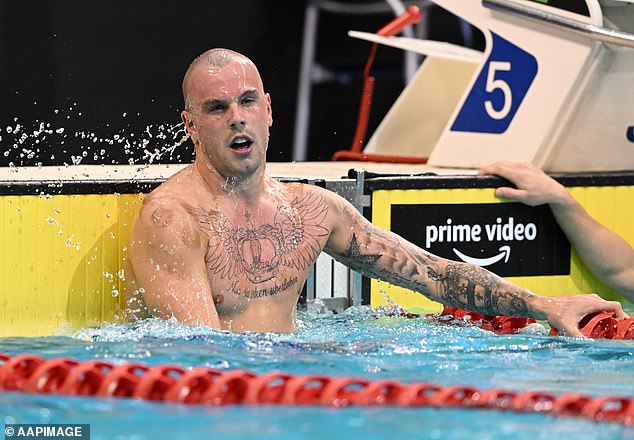 Chalmers, who claimed silver in the 100m freestyle and bronze in both the 4x100m and 4x200m freestyle at the Tokyo Olympics last year, has strongly denied those accusations, labelling them ‘hugely pathetic’.

‘It’s the biggest joke I’ve ever heard, to be honest with you,’ Chalmers, the Olympic champion in the 100m freestyle at the Rio Olympics in 2016, told 2DAY FM.

‘I started out a butterflyer, I’ve wanted to be a butterflyer my whole career. My body just hasn’t allowed me to do so, so for me just being able to swim butterfly is so special.

‘Unfortunately, yeah, I’m the one who has to stand up and apologise and be made out to be the villain when all I’ve done is given everything to my sport and my country.’ 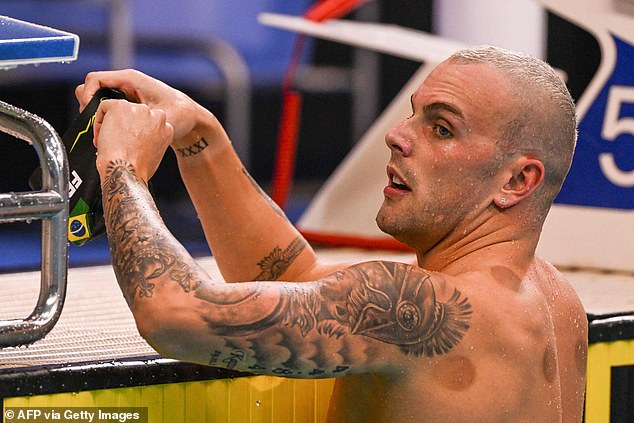 The 2016 Olympic champion was a shock absentee from the team-naming ceremony on Sunday, citing mental health reasons

‘The past few days have been really challenging for me mentally and emotionally and it’s taken a massive toll on me. I need to look after my mental health and get myself right as I prepare for a massive year in the pool,’ he wrote.

‘The negative media attention surrounding my decision to compete at worlds and the made-up story lines surrounding my personal life have been more than I can handle.

‘After giving my all to the sport and being so welcoming to the media all my career it’s a shame to see them publish storylines questioning my integrity all for the sake of extra clicks and money.’