Coffee bean prices have plunged to their lowest levels in two years – but your caffeine fix is unlikely to cost you less.

The slump is caused by an expectation of record coffee harvests this year in Brazil, the world’s largest producer.

But when prices have fallen before, the cost of our lattes and cappuccinos actually went up at Starbucks and other High Street chains.

Earlier this month, the price of a bag of coffee beans on the international markets dropped to its lowest since 2016.

Hedge fund managers have pushed costs down even further, after betting that the value of coffee beans will fall.

Their pursuit of bumper profits may mean that smaller farmers are put out of business because many will fail to break even on their crop this year.

There has been a slight recovery in the price of beans in recent weeks but they are still 10 per cent cheaper than they were a year ago.

The price drop is more likely to boost profits for investors and coffee chains than to reduce bills in stores.

Analysts at research firm BTIG said in 2016 that the cost of a cup is almost never cut when wholesale bills drop.

They explained that coffee accounts for only about 20 per cent of chains’ costs.

Other costs, including rising minimum wages and rent bills, are putting a squeeze on the stores, meaning that savings in coffee prices are unlikely to be passed on to consumers. It is predicted that a good growing season in Brazil may have pushed production up to 65million bags, or 3.9million tons.

Hedge funds have short-sold the equivalent of 1.2million tons of the commodity – meaning they will make money if its value falls. Their bets pushed the price of coffee as low as 83p per pound, its cheapest level for two years. 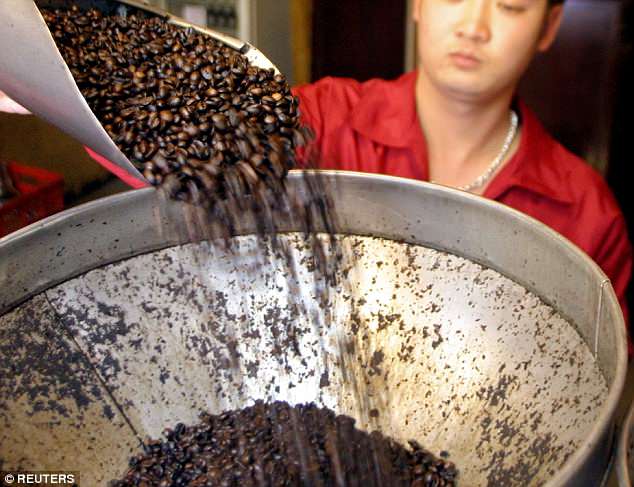 Earlier this month, the price of a bag of coffee beans on the international markets dropped to its lowest since 2016

Prices slipped below the cost of production for many farmers, meaning they were set to make a loss on the harvest.

The hedge funds are also at risk because anything that suddenly drives prices back up, such as a bad frost in Brazil, will trigger huge losses. Prices saw a slight recovery in the past few days as shipments from Uganda to the West were disrupted by heavy rain.

Coffee has overtaken tea as Britain’s favourite hot drink in the past 20 years, and the UK’s 24,000 coffee shops now generate revenues of more than £9billion a year.

The average UK consumer gets through 7.3lb of beans a year, closing in on amounts consumed in the US and Italy.

It comes as sugar prices have hit their lowest since 2015, thanks to increased production in India, Thailand and Europe.

Meanwhile, prices of vanilla pods surged to record levels last month thanks to jitters ahead of the harvest in Madagascar, the world’s top grower. Vanilla is now worth more than silver.