Coffee chain Starbucks will charge customers 5p for a cup

Starbucks is to start charging five pence for coffee cups as part of a drive to reduce waste and encourage the use of reusable cups.

The levy will be trialled at 35 London stores.

Starbucks says the trial will also look at how to change consumer behaviour after half of consumers surveyed said they would start to carry a reusable cup.

The proceeds from the 5p charge will be donated to an environmental charity.

Behaviour change experts Hubbub will help to track the impact on customer habits.

Since 2014, Starbucks has offered a £1 reusable cup to make it as easy as possible for customers to reuse at an accessible price.

During the trial, five pence will be added automatically on to any paper cup.

To further reduce waste, Starbucks said its baristas will also ensure all customers drinking in store are offered their drink in a ceramic cup.

Simon Redfern of Starbucks Europe said ‘We’re hoping that this charge will remind customers to rethink their use of single-use plastic-lined cups, as it has with plastic bags.

‘We’ve offered a reusable cup discount for 20 years, with only 1.8% of customers currently taking up this offer, so we’re really interested in working with Hubbub to see how this charge could help to change behaviour and help to reduce waste.’

Gavin Ellis, Co-Founder, Hubbub said: ‘Our early conversations with customers have shown an increased awareness of the need to reduce waste from single-use cups. 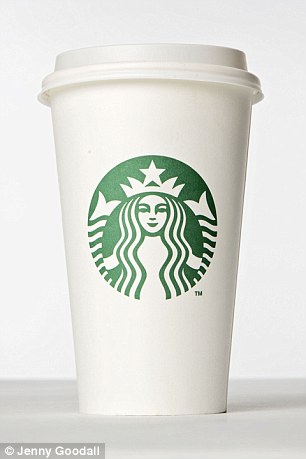 Simon Redfern of Starbucks Europe said ‘We’re hoping that this charge will remind customers to rethink their use of single-use plastic-lined cups, as it has with plastic bags’

‘Previous studies have shown that adding a charge on single-use cups is more effective than money off a reusable cup. We’re excited to be working on this initiative with Starbucks to find out if this is the case on the high street and to discover what else will encourage people to use reusable cups.’

MPs have called for a 25p ‘latte levy’ to curb the mountain of up to five billion disposable coffee cups dumped each year, almost none of which are recycled.

Experts estimated the levy could raise £438million and lead to a 30 per cent reduction in the number of cups as more people carry their own.

Government sources have said ministers are ‘open’ to the idea of a coffee cup charge if evidence shows it would change behaviour.

Starbucks is the first firm to introduce a charge. Although less than the 25p suggested by MPs the trial is an important first step by the US chain – and the proposals are a victory for the Daily Mail’s Curb the Cups campaign.

Sandwich chain Pret a Manger has announced that it is doubling the discount for customers who bring in reusable cups to 50p.