Michael Cohen ended his testimony to Congress on Wednesday with a chilling prediction that Donald Trump will not go quietly if he loses the 2020 election.

Cohen claimed that he ‘blindly followed’ Trump’s demands for years, and it has cost him ‘everything,’ including his law license, his honor, his reputation and soon, his freedom.

‘And I will not sit back, say nothing, and allow him to do the same to the country,’ Cohen said. ‘I fear that if he loses the election in 2020, that there will never be a peaceful transition of power, and this is why I agreed to appear before you today.’

The president’s former attorney apologized repeatedly for lying to lawmakers and insisted he was telling the truth now, but it was not enough to convince Republican legislators who are close to Trump that Cohen is credible.

Indeed, some Democrats, including the committee’s chairman, signaled that they, too, remain skeptical.

Cohen said in closing remarks that he is trying to make amends for his previous crimes, and he came before Congress as part of that process to blow the horn on Trump’s illicit behavior.

‘I acknowledged I have made my own mistakes, and I have owned up to them publicly and under oath,’ he asserted. ‘I did things and I acted improperly, at times at Mr. Trump’s behest.’

In a direct appeal to Trump, who is abroad in Vietnam, he hammered him for a host of controversial policies, including family separations at the border and the government shutdown.

‘We honor our veterans, even in the rain, you tell the truth, even when it doesn’t aggrandize you,’ he said, ‘you respect the law and our incredible law enforcement agents.’

‘You don’t attack the media, and those who question what you don’t like or what you don’t want them to say, and you take responsibility for your own dirty deeds,’ he lectured.  ‘You don’t use your power of your bully pulpit to destroy the credibility of those who speak out against you.’ 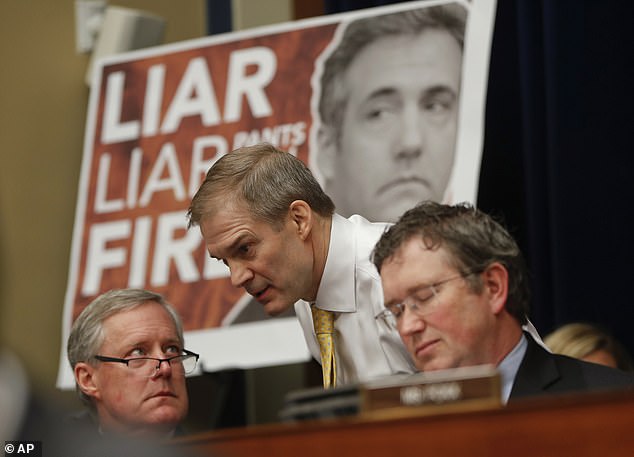 Rep. Jim Jordan, the ranking Republican on the committee, was not impressed. Jordan accused Cohen of making numerous false statements in his Wednesday testimony

In a final plea to the man he worked for as a fixer for, Cohen said: ‘This behavior is churlish, it denigrates the office of the president and it’s simply unAmerican — and it’s not you.

‘I pray the country doesn’t make the same mistakes that I have made or pay the heavy price that my family and I are paying.’

Rep. Jim Jordan, the ranking Republican on the committee, was not impressed.

Jordan accused Cohen of making numerous false statements in testimony, as he wound down the the seven- and-half-hour hearing that ended after 5 pm.

‘We know Mr Cohen has been dishonest in the past, that’s why he’s going to prison in two month,’ he said as he delivered his final thoughts. ‘But there are things today that he said in the several hours of questioning that just don’t add up, either.’

He said that Cohen claimed that he never defrauded a bank, when he did. Cohen said he did not have contracts with foreign entities, when he had at least two, the GOP legislator said.

Furious Republicans crossed swords with Cohen and called him a liar on his way to prison who has neither credibility nor remorse, blasting him one after another in furious tones and eye-daggers throughout the hearing.

Cohen stood his ground and recounted a day in Trump Tower when the future president made the decision to make a hush money payoff to an adult film actress who claimed she had an affair with the billionaire. 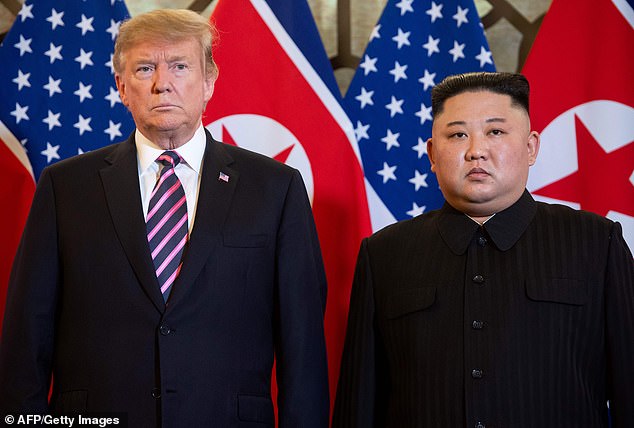 In a direct appeal to Trump, who is abroad in Vietnam at a nuclear summit with Kim Jong-un, he hammered him for a host of controversial policies

‘He had told me he had spoken to a couple of friends,’ Cohen recalled of a meeting in then-candidate Trump’s office.

‘As he has admitted, he has repeatedly lied in the past,’ Cummings said.

But he insisted that following two years of denials from Trump, ‘the American people have a right to hear the other side. They should watch Mr. Cohen’s testimony and make their own judgments.’

For committee Republicans, too, skepticism was the order of the day.

Jordan called Cohen ‘a guy who can’t be trusted’ in his opening statement.

‘It’s the first time a convicted perjurer has been brought back to be a star witness in a hearing,’ he said during his opening statement, calling the star witness ‘a guy who is going to prison in two months for? Lying to Congress.’

‘He told our committee staff that this was his idea. … He had to persuade the chairman to actually have it,’ Jordan said.

‘I mean, the credibility factor with Michael Cohen is probably the lowest we’ve ever seen for a major witness in congressional testimony history.’

The president’s eldest son also mocked Cohen Wednesday on Twitter, responding to a conservative who noted that Congressional Democrats had invited a high-profile witness to testify after he pleaded guilty to lying to Congress.

‘This time it’s different,’ he tweeted, adding an emoji depicting an eye-roll.

White House Press Secretary Sarah Sanders also noted in a statement that Cohen is a ‘disgrace felon’ who is ‘going to prison for lying to Congress and making other false statements.’

‘Sadly, he will go before Congress this week and we can expect more of the same. It’s laughable that anyone would take a convicted liar like Cohen at his word, and pathetic to see him given yet another opportunity to spread his lies,’ she said in a statement issued before Cohen spoke publicly.

Cohen didn’t spare himself from criticism as he reflected on his crimes.

‘I am ashamed of my weakness and misplaced loyalty – of the things I did for Mr. Trump in an effort to protect and promote him. I am ashamed that I chose to take part in concealing Mr. Trump’s illicit acts rather than listening to my own conscience,’ Cohen said.