Heavy snow, rain, thunderstorms and gales brought chaos to much of Britain yesterday.

Several inches of snow fell across northern England and Scotland while the south coast was lashed by torrential downpours and lightning.

Homes were left without power, flights were suspended and buildings were damaged by strong winds.

The Met Office recorded 70mph gusts at Southampton yesterday morning as the side of a house was ripped away in East Boldre, Hampshire.

Geoff Clark, 47, and his son William, 8, from Low Fell, sledging under the Angel of the North in Gateshead, after heavy snow, rain, thunderstorms and wind caused disruption across much of Britain

And there’s more to come tonight, with Storm Dylan bringing 80mph winds to northern Britain – and more torrential rain and possible flooding in the South signalling a soggy New Year for many.

Forecasters said the storm could bring more power cuts – after around 2,000 homes were left in the dark yesterday across the Midlands, South Wales and the South West. Much of Yorkshire, Cumbria, the Peak District and the north-east woke up to snow, with between two and six inches falling during the morning.

About 4in was recorded at Glasgow’s Bishopton weather station but more is likely to have fallen on higher ground where official figures are not collated. 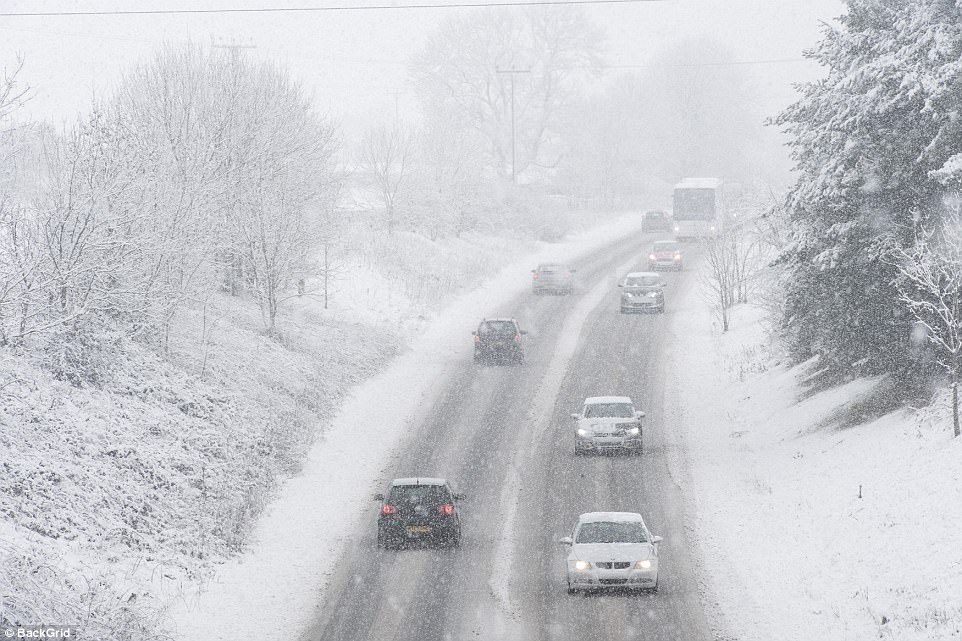 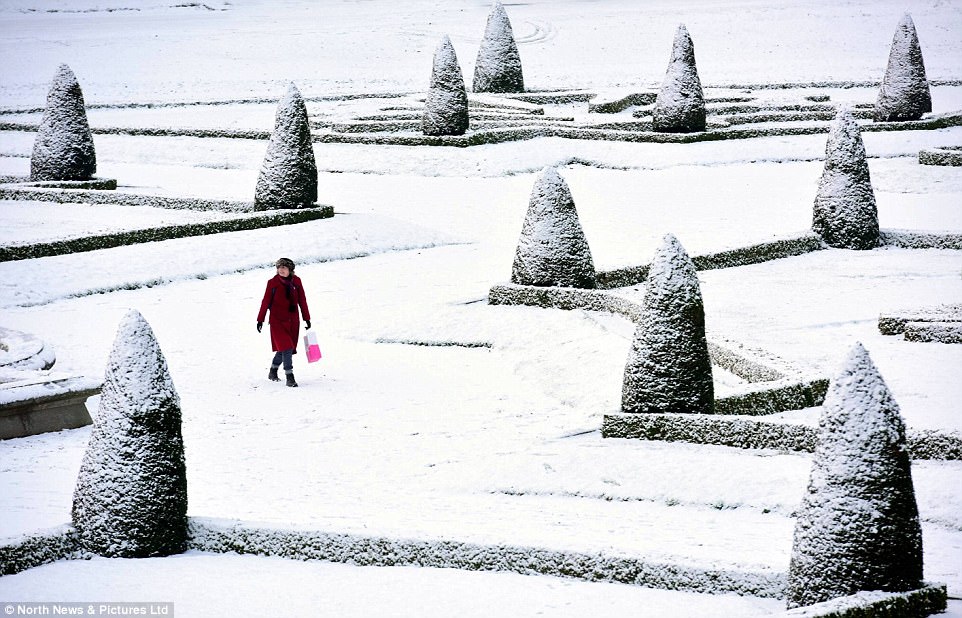 A woman strolls through the wintry grounds of Bowes Museum, County Durham – as a band of heavy snow sweeps across Northern England

Residents had to shovel snow from drives, clear their cars and allow extra time for treacherous journeys. But some took advantage with a spot of sledging.

The southbound M1 near Garforth, West Yorkshire, was closed all morning after a 19-year-old male pedestrian was hit by a lorry and killed on a sliproad. In Northumbria heavy snow made the A68 at West Woodburn impassable while sections of the A6, A590 and A591 in Cumbria were either closed or blocked. 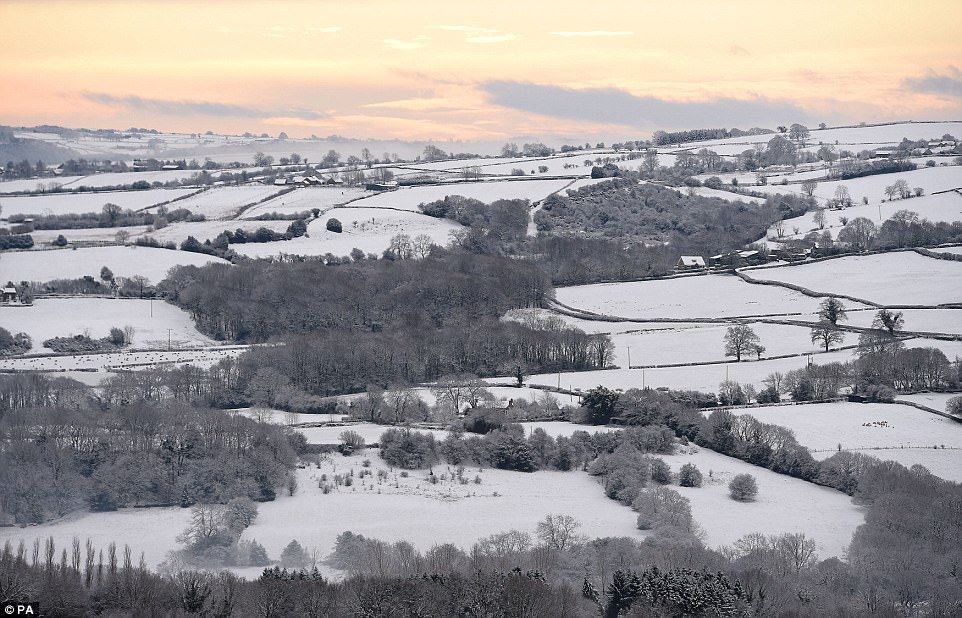 A snow-covered landscape at Holmesfield in Derbyshire, after Britain saw one of the coldest nights of the year with temperatures falling to minus 12.3C at Loch Glascarnoch in the Highlands of Scotland

Cumbria Police warned that all routes in the south of the county were affected, as well as the M6.

In Sheffield a car was recorded on dashcam footage losing control heading downhill on an icy road, hitting a tree and flipping over on to its roof. The driver escaped with cuts and bruises.

Meanwhile the AA received 6,213 calls by 1pm and the RAC dealt with a breakdown every ten seconds. In Scotland heavy snow caused flights from Glasgow Airport to be suspended. 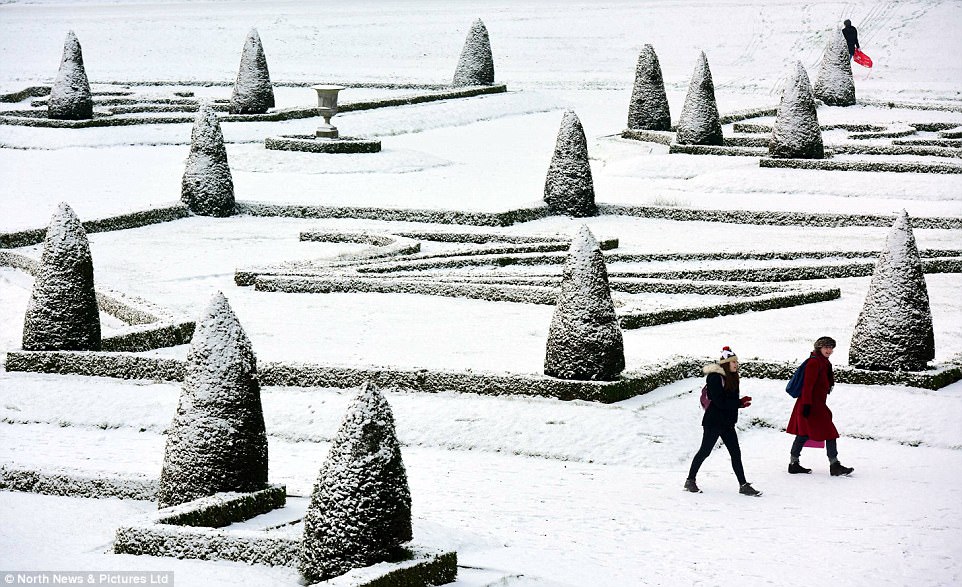 The wintry grounds of Bowes Museum in County Durham, where snow dominated the landscape as the North of England was caught up in the chill 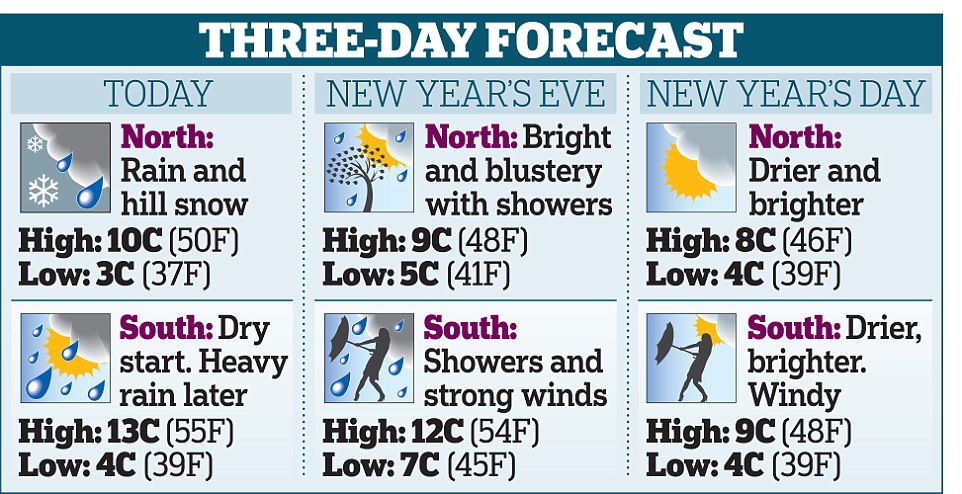 The temperature overnight had plunged to -12C (10F) at Loch Glascarnoch in the Highlands. But with the mercury due to rise over the weekend, the snow is not expected to stay for long.

Emma Sharples of the Met Office said: ‘Temperatures do continue to steadily climb, although there will be a dip overnight when it will get potentially quite icy. 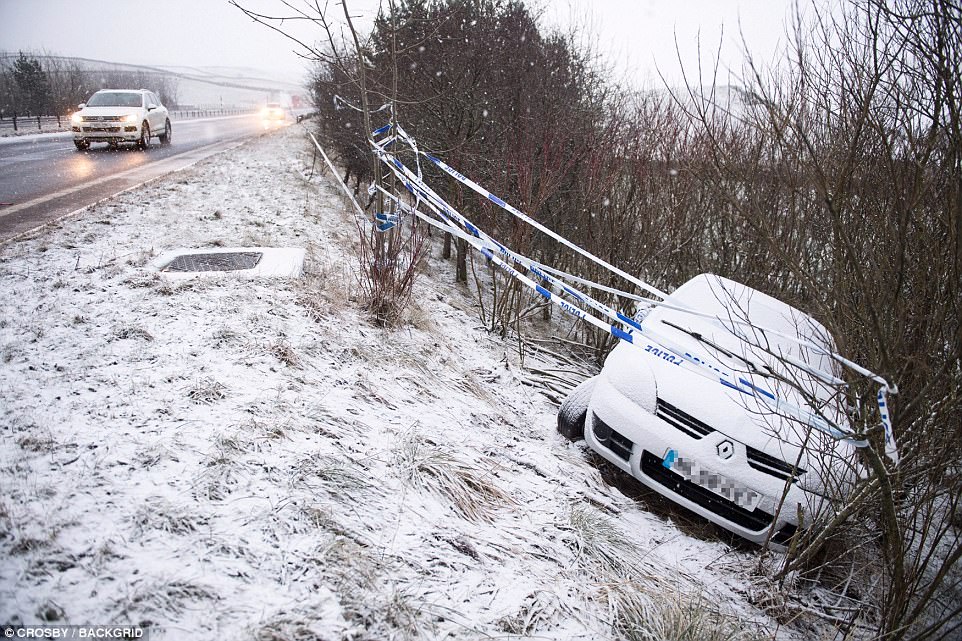 A car is left in a ditch having left the icy A66 near Brough, in the East Riding of Yorkshire, yesterday, as snow his northern regions

It is thought that temperatures could reach 10-12C (50-54F) in England by Sunday. But between this evening and tomorrow morning, Storm Dylan is set to bring torrential rain to areas that escaped yesterday’s snow.

The Met Office issued a warning for southern areas of England and Wales where worst-hit areas could see up to 40mm (1.5ins) of rain fall in three hours. 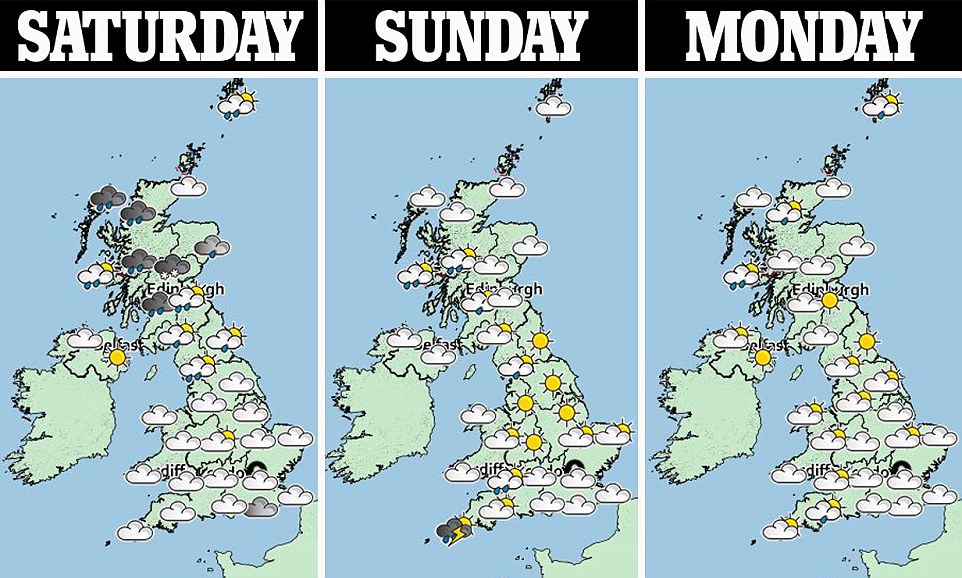 It’s set to be a soggy New Year in the south as the UK braces itself for Storm Dylan, which could bring winds of up to 80mph 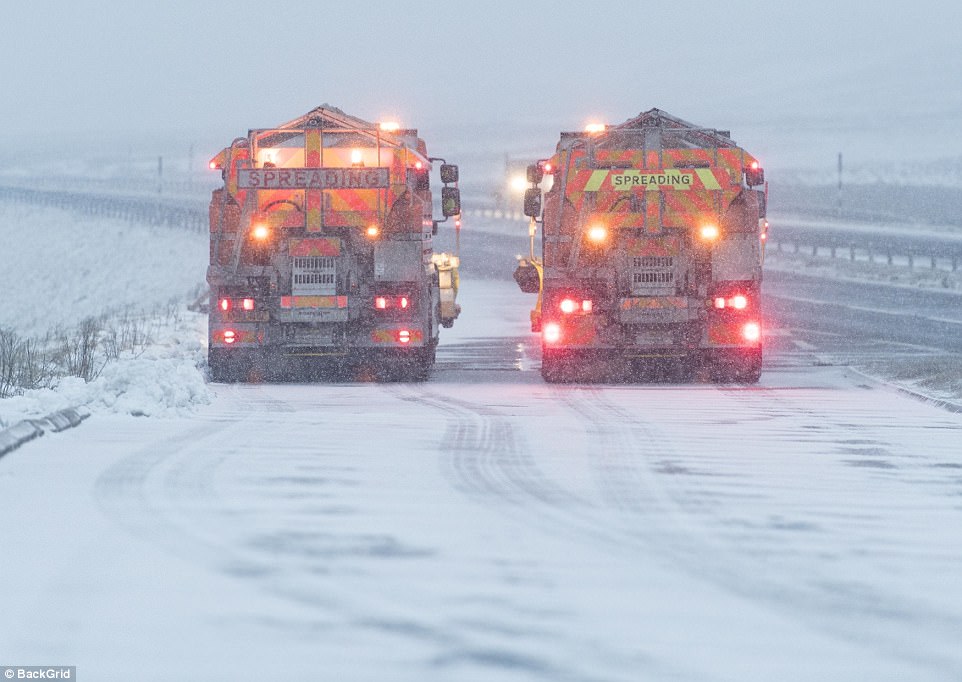 Heavy snow showers hit the A66 this morning, making driving conditions tricky for motorists yesterday as several inches of snow hit the north of the country

The downpour is set to cause localised flooding on roads and the AA has called for funds from parking and bus lane fines to be diverted to maintain drains and fill potholes.

‘Councils have been hunting drivers relentlessly for fines income and now it is time for that money to go to where it is desperately needed,’ said AA president Edmund King.

Despite the snow, 2017 was the fifth-warmest year since records began in 1910.