Coleen Rooney cut a pensive figure as she did her food shopping in Cheshire on Monday, ahead of her £1m libel court case with Rebekah Vardy.

The WAG, 34.was seen popping into Waitrose to fulfil her domestic duties as she wheeled a trolley full of shopping bags out of the store.

Coleen opted for a casual ensemble for her shopping trip, clad in a black hoodie and matching leggings which drew the eye to her trim frame.

There she is: Coleen Rooney cut a pensive figure as she did her food shopping in Cheshire on Monday, ahead of her £1m libel court case with Rebekah Vardy

The star completed her ensemble with white and leopard print trainers and a pair of diamond stud earrings.

Her caramel tresses were pulled into a chic bun while a light palette of make-up enhanced her pretty features.

Mum-of-four Coleen looked focused as she wheeled her shopping out of the supermarket and prepared to head home with her family. 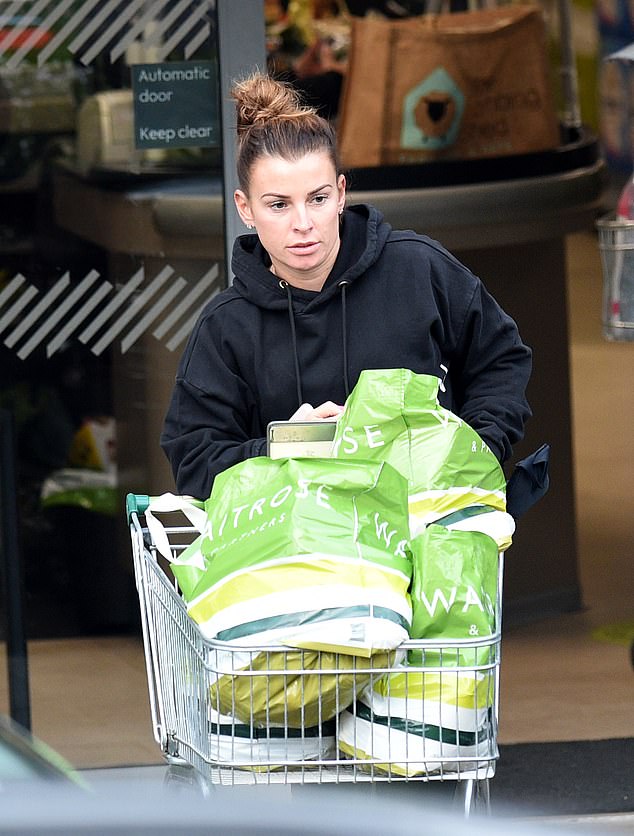 WAG War: The WAG, 34.was seen popping into Waitrose to fulfil her domestic duties as she wheeled a trolley full of shopping bags out of the store

Precautions: Coleen was seen wearing a black face mask as she left the store 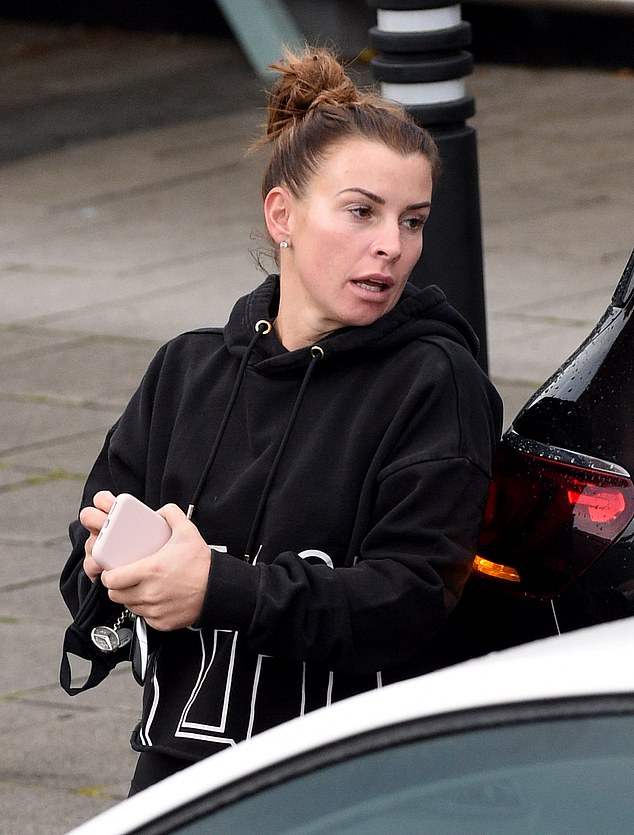 Natural look: Her caramel tresses were pulled into a chic bun while a light palette of make-up enhanced her pretty features 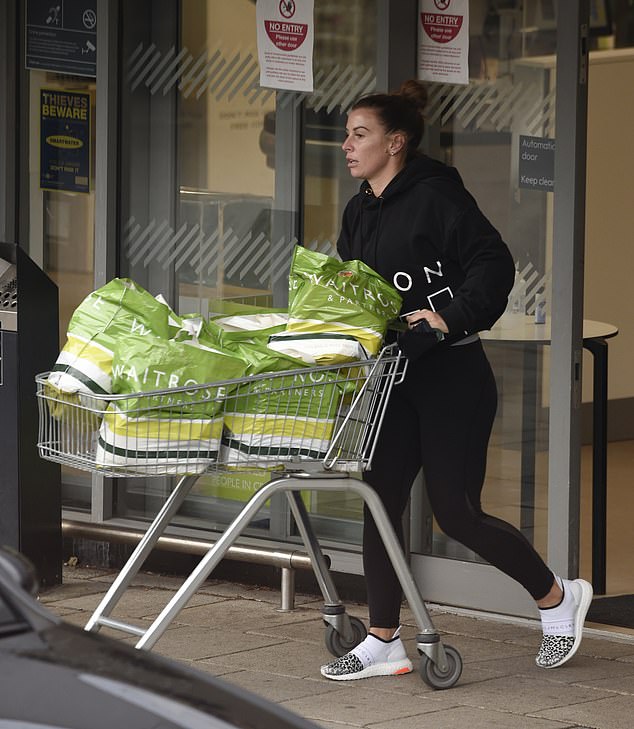 Casual cool: Coleen opted for a casual ensemble for her shopping trip, clad in a black hoodie and matching leggings which drew the eye to her trim frame

The outing comes amid claims Coleen reportedly sees Rebekah Vardy’s Dancing On Ice stint as a ploy to get the public to like her during their £1 million libel court case.

The wife of Wayne Rooney is said to ‘not be having’ it, as she is certain that she has a solid case against her fellow WAG, 38, in their legal battle.

Speaking to The Sun on Saturday Coleen, who accused Rebekah of selling stories about her last year, joked: ‘She’ll need all the money she can get to take me on.’

Meanwhile a source also spoke to the publication, claiming that the pair were not prepared to ‘back down’ in their case. 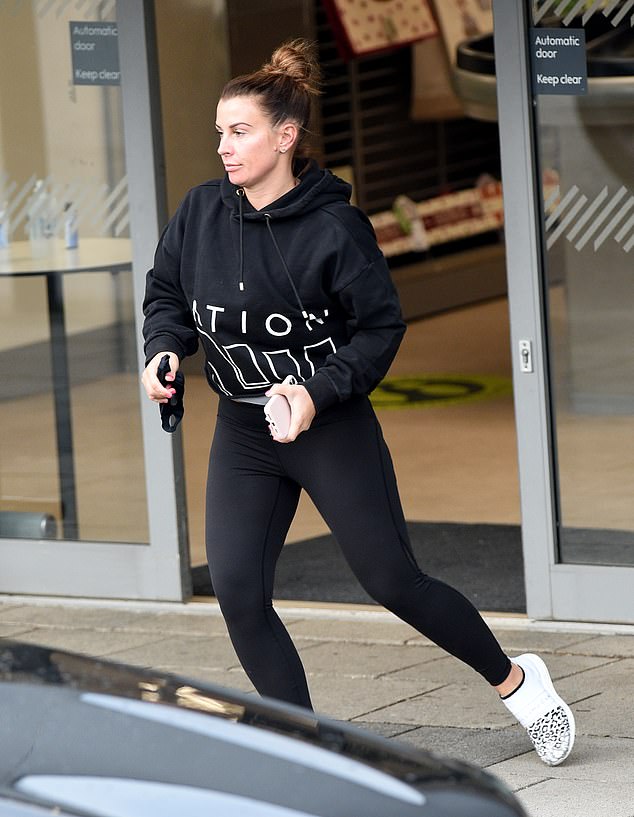 Looking good: Coleen looked radiant as she stepped out to do the food shopping 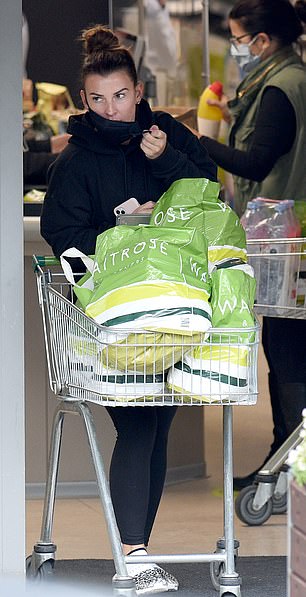 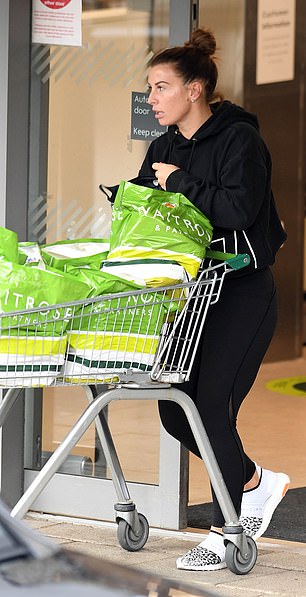 Off we go: The star looked deep in thought as she walked along with her trolley 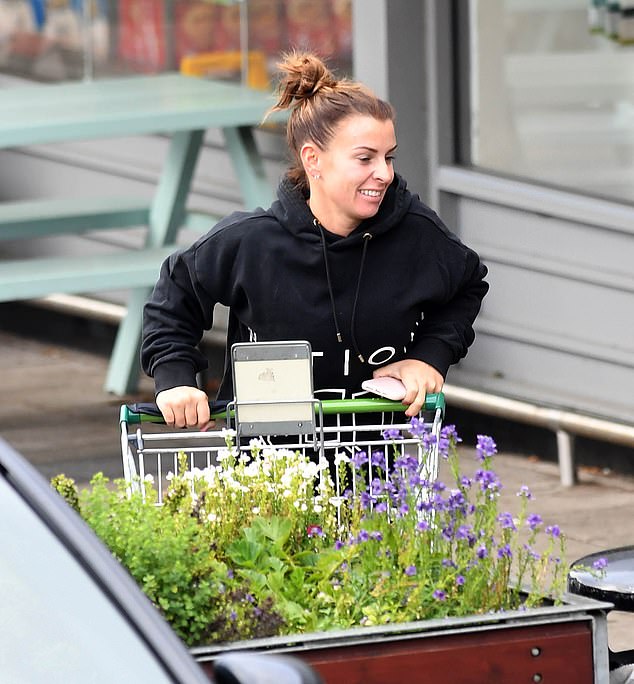 Smile: Coleen cracked a smile as she pushed her trolley into the store 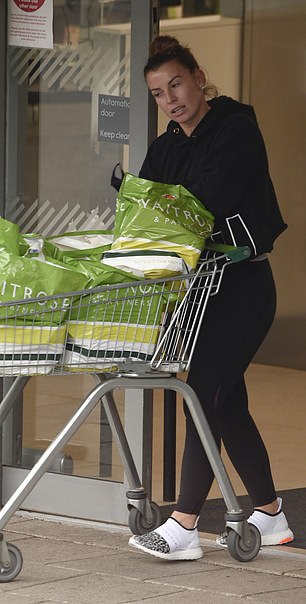 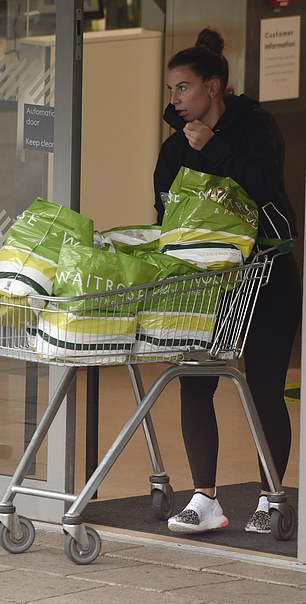 Looking good: Coleen looked casually chic in her sporty ensemble as she stepped out

Of Coleen’s thoughts on her rival’s decision to sign up to the reality competition show, they said: ‘As far as she is concerned Becky is using it to get the public on her side ahead of their libel trial.

‘Coleen is absolutely certain she is right and is standing true to her beliefs. She knows she might lose and have to pay damages but she doesn’t care.

‘This isn’t about money to her — it’s about principle and honesty and she will shell out however much it takes.’

The source added that Rebekah was keen to put her skates on for Dancing On Ice as she sees it as her way to change people’s perceptions of her, and clear her name. 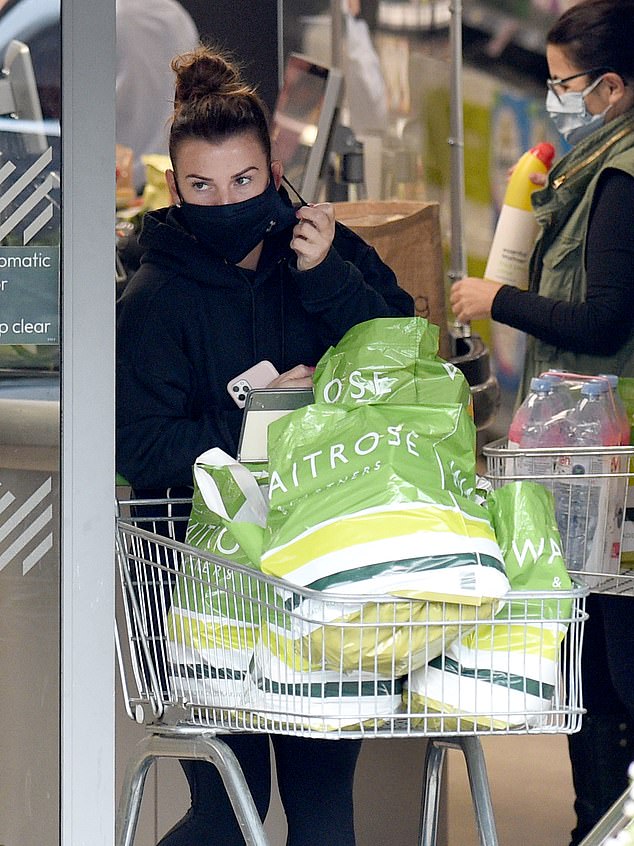 Mask: The star complied with regulations as she wore a face covering to do the shop 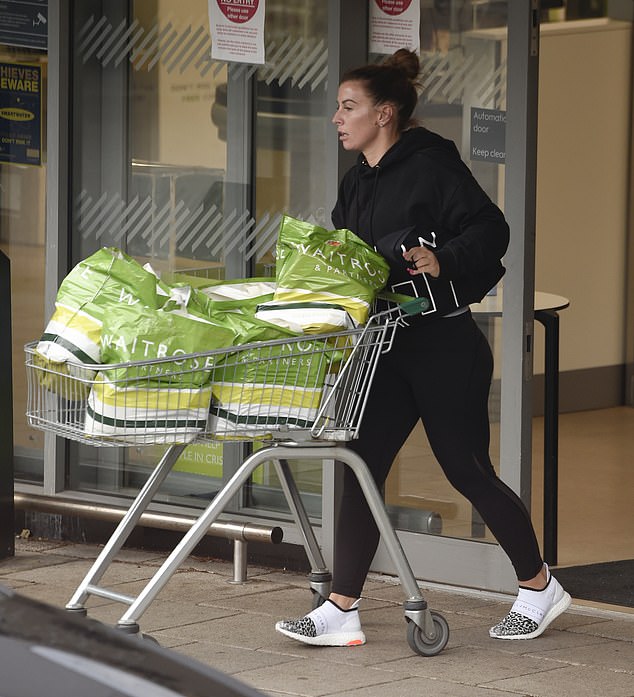 Focus: Coleen kept her look casual for her trip to the shops on Monday

Rebekah is said to want to be seen as a devoted mother and wife, rather than a ‘snake’ who leaks stories to the press, a claim she has vehemently denied.

In explosive new documents reportedly seen by The Sun on Saturday, Coleen’s legal team has accused Rebekah of selling private information about other celebrities to the press.

According to the publication, Coleen’s defence has now included the 2001 story from the News of the World which saw Becky claim that she had a fling with Peter.

The papers state: ‘In the interview, the Claimant disclosed amongst other things that (i) she had sexual intercourse with Peter Andre in November 2001, and that it lasted just five minutes… 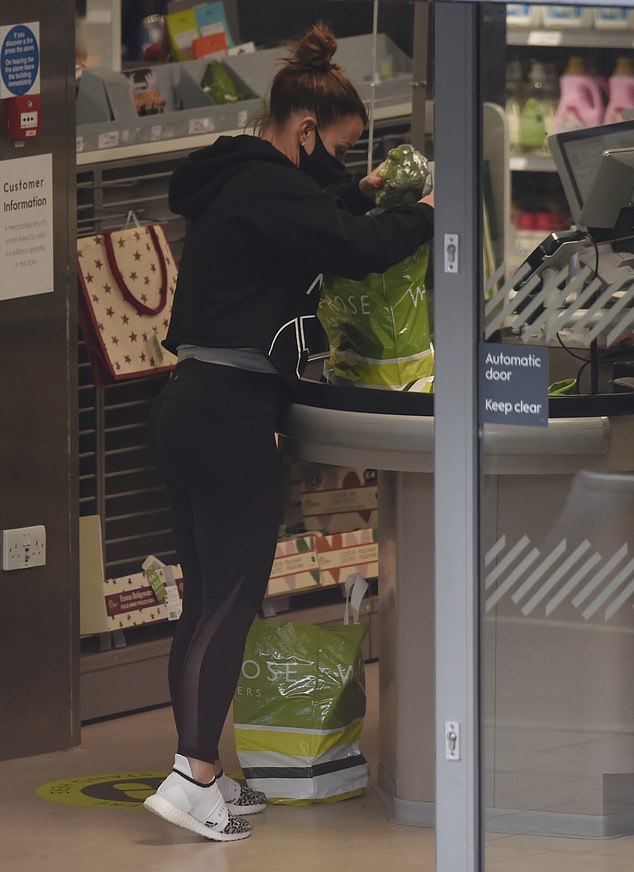 Packing up: Coleen wore her mask as she packed her bags and prepared to head home

‘(iii) that he “had absolutely no hairs on his body”; and (iv) he “slaver[ed]” like one of her boxer dogs when he kissed her.’

MailOnline contacted representatives for Coleen Rooney, Rebekah Vardy and Peter Andre for comment at the time.

The documents also claim that Rebekah sat near former friend Coleen at Euro 2016 in order to ‘maximise media attention’.

The papers are said to claim that Becky ditched her allocated seats at the match and deliberately sat near Coleen ‘to guarantee her appearance in the media’.

The documents also reportedly discuss how Becky allegedly worked for The Sun to film a ‘behind the scenes’ video at the National Television Awards in 2018. 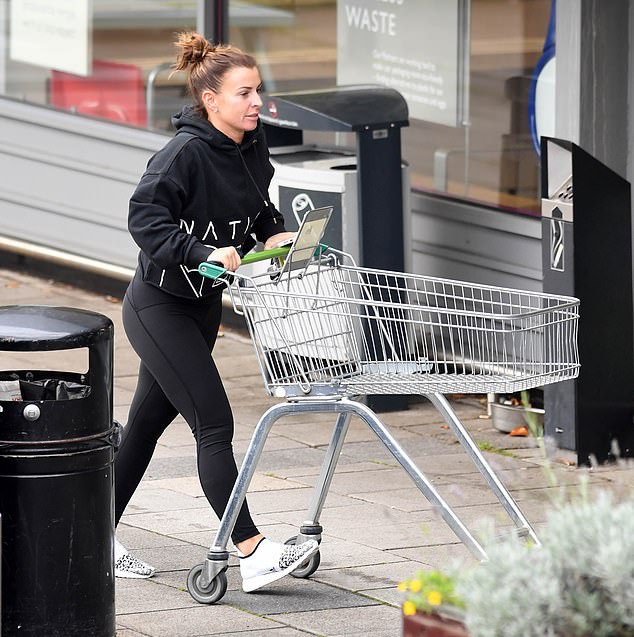 Domestic duties: The star was enjoying a break from her hectic schedule as she shopped 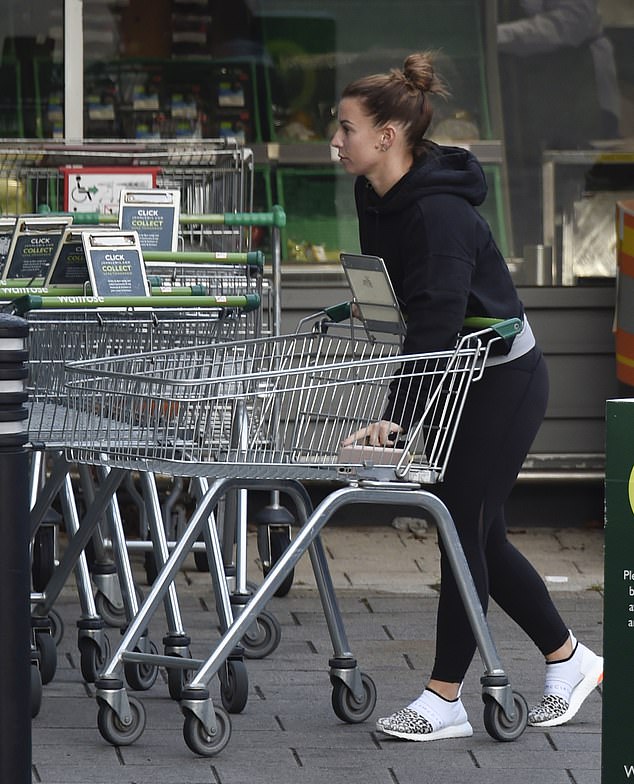 Lots going on: The shopping trip comes amid a turbulent time for the star amid her WAG war

It has been reported that Coleen wants to end the £1 million High Court libel battle against Becky set to take place from November.

Sources claim those close to the wife of Derby County footballer Wayne Rooney, 34, have been encouraging her to settle their dispute privately, after her rival confirmed she is taking part in Dancing On Ice and has vowed to ‘clear her name’. 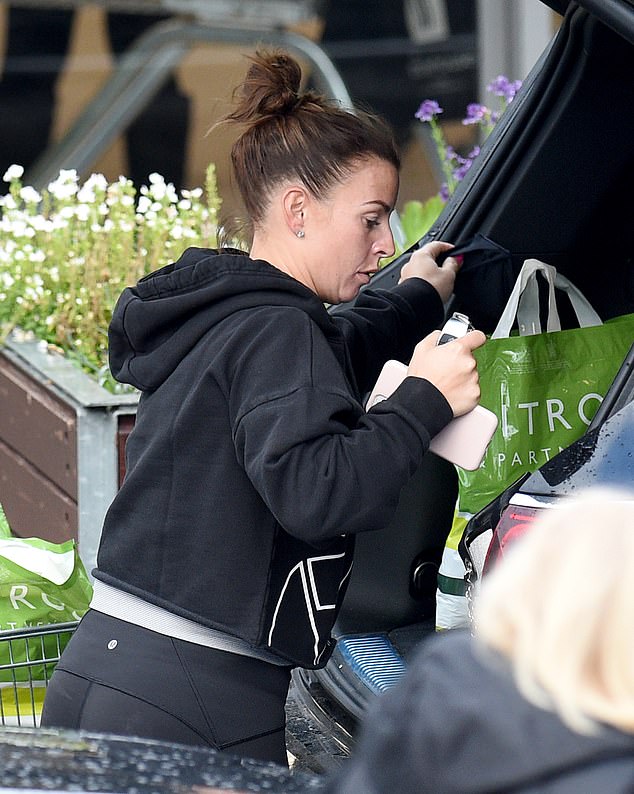 Hometime: Coleen looked stylish as she loaded her bags into the car

Rebekah is seeking substantial damages in the subsequent libel trial, as she claims to have suffered ‘severe and extreme hostility and abuse’ in the fallout after the claims were published on Instagram.

The Mirror reports that judge Mr. Justice Nicklin has stated a preliminary trial will decide the ‘natural and ordinary’ meaning of Coleen’s social media posts.

He has also given Coleen until October 2 to serve a ‘statement of case’. 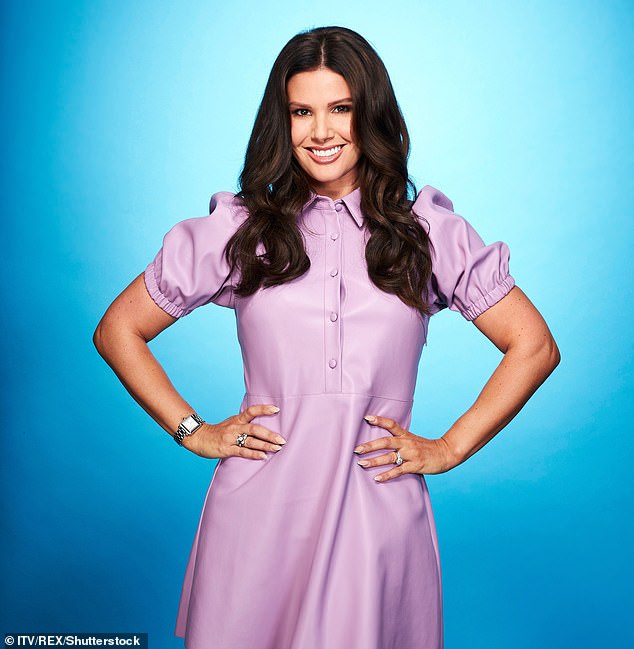 Claim: The outing comes amid claims Coleen reportedly sees Rebekah Vardy’s Dancing On Ice stint as a ploy to get the public to like her during their £1 million libel court case 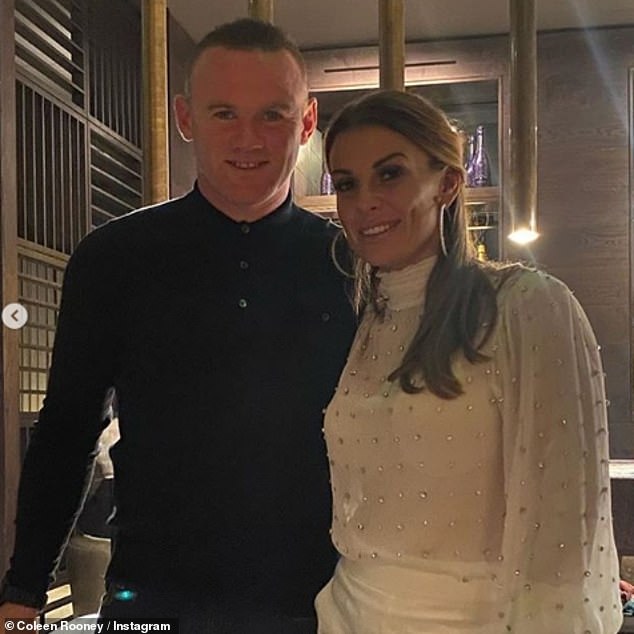 Headstrong: Coleen, who accused Rebekah of selling stories about her last year, joked to The Sun: ‘She’ll need all the money she can get to take me on’ 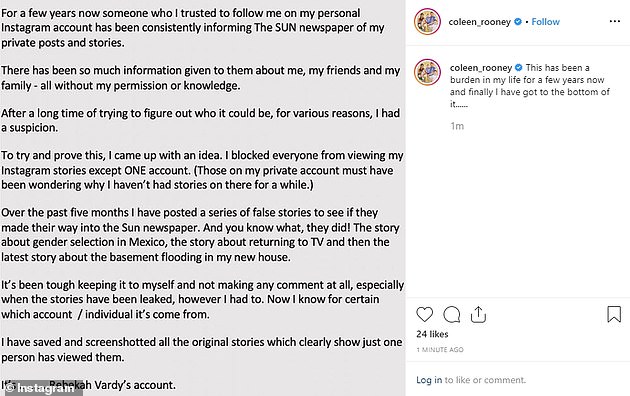 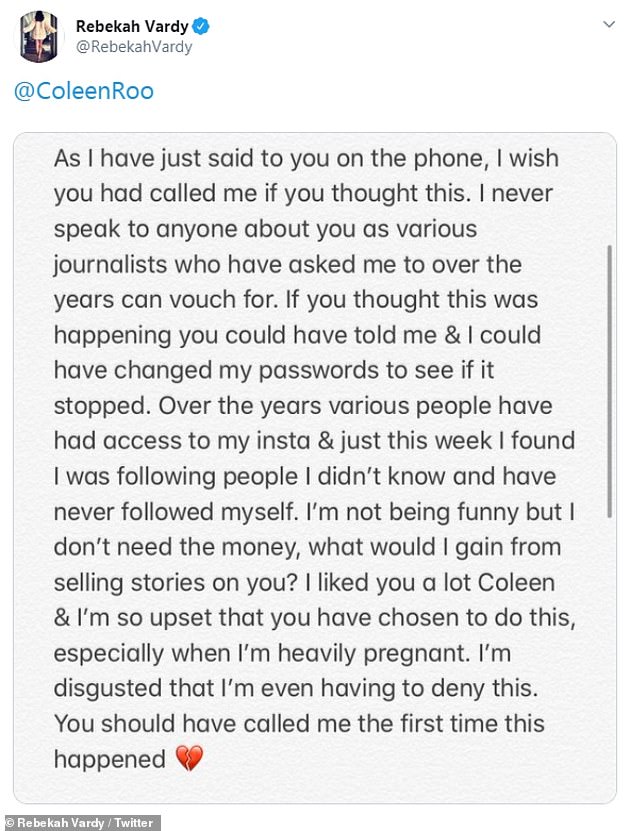 In the September 17 court order he stated: ‘It is ordered by consent that there be a trial of the preliminary issue of the natural and ordinary meaning of the words complained of.’

The half-day trial, he has stated, would be heard by a judge specialising in media and communication after November 15.

Court costs are expected to stay under £25,000 on each side, according to the publication, with any party exceeding the limit being required to justify them.

On Tuesday, it was claimed that the Rooney’s basement had flooded due to Storm Lorenzo.

The Sun first reported that mother of four sons, Coleen had looked into ‘gender selection’ treatment in a desperate bid for a daughter and had flown to Mexico earlier this year to discuss the controversial £8,000 treatment with doctors

The Sun wrote that she was in talks to revive her once successful UK TV career now her family has moved back to this side of the Atlantic.