She has been letting her hair down during a girls’ trip to Ibiza.

And Coleen Rooney put on her most raucous display to date over the weekend when she was seen living it up on a boozy excursion, during which she opened a £5 bottle on wine with her teeth and sipped champagne.

The WAG, 33, who shares four sons, Kai, nine, Klay, six, Kit, three, and Cass, 15 months, with husband Wayne, looked incredible in a stylish bikini with gold adornments, as she frolicked in the sunshine and draped herself around a male pal on a break from mummy duty.

Coleen certainly looked to be enjoying herself, with the stunner clutching various drinks and appearing bleary-eyed during the lively outing.

Despite Wayne’s wealth – his net worth was estimated at £13million in 2015 – Coleen proved she still loves a bargain as she reached for the bottle of Viña Sol, which markets for as little as £5.22.

The Liverpudlian beauty looked sensational as she displayed her honed figure in her favourite style of bikini – a simple triangle top with low-slung bottoms.

She was seen holding on to a male pal – who was stylishly clad in a Givenchy tee – as he appeared to prop her up.

Down it Coleen! The stunner was feeling particularly playful as she larked around on the boat while using the wine as a prop 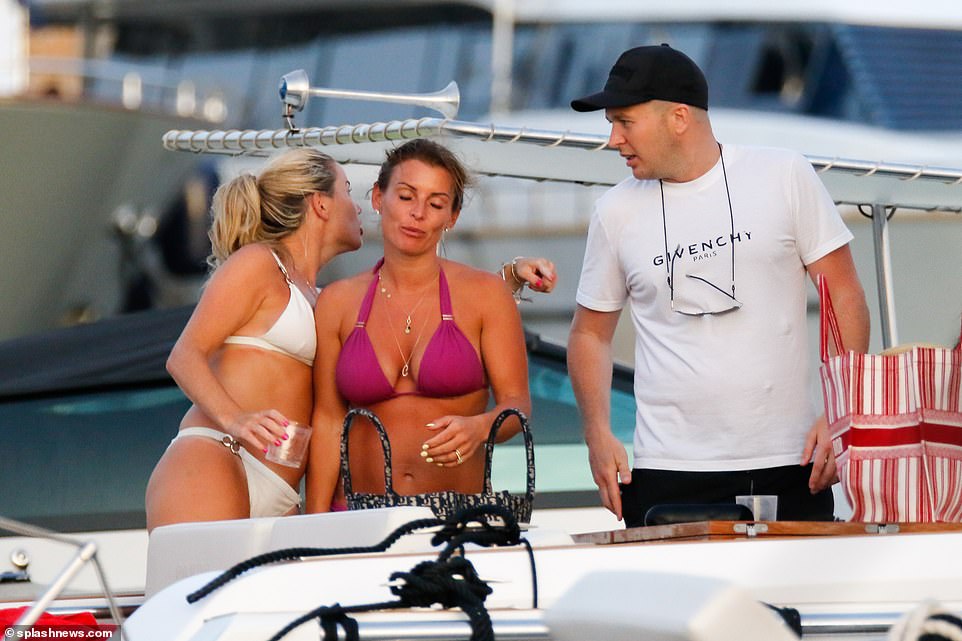 Oops! She was certainly looking animated as she lived it up alongside her pals for the raucous night 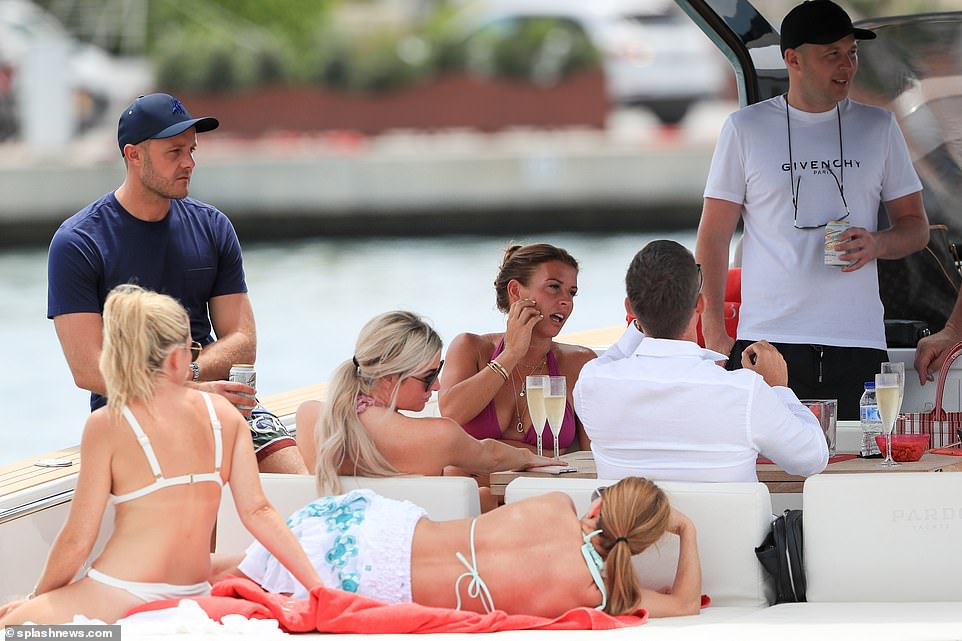 Holding court! Coleen was the life and soul of the party as she chatted away in front of the group 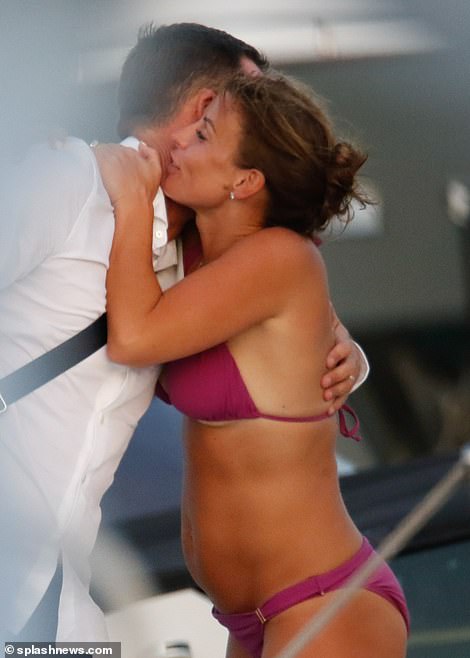 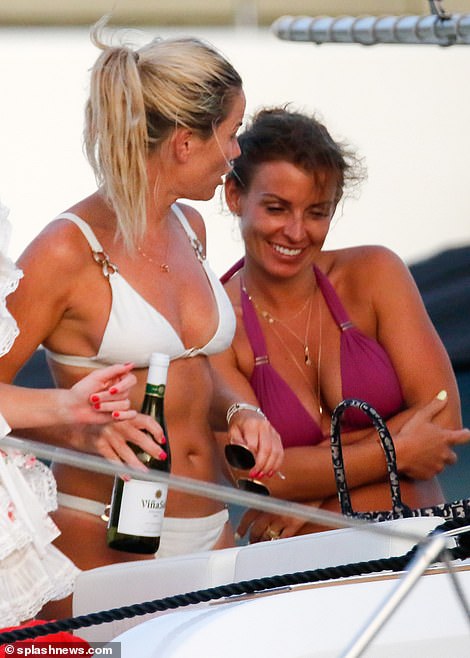 Prior to her holiday, Coleen marked her 11th wedding anniversary to husband Wayne in a touching Instagram post. She shared a sweet snap of the duo with a telling caption which referenced the turbulent nature of their marriage, which has been blighted by infidelities.

Childhood sweethearts Wayne and Coleen met at school when they were 12, before they started dating after they finished school at 16. They tied the knot in Portofino, Italy in 2008 – rumoured to have cost £5million.

After both a civil and church ceremony – and three dress changes for Coleen – the newlyweds celebrated at the Villa Durazzo, for a champagne reception, which continued on until 4am. 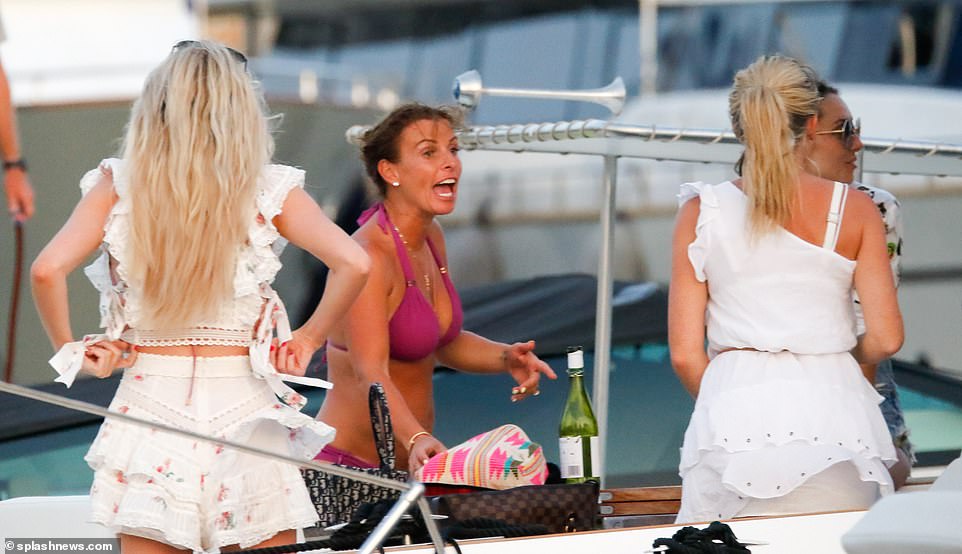 Wahey! She was having a wild time with her pals on the boat in a stylist bikini and designer bag 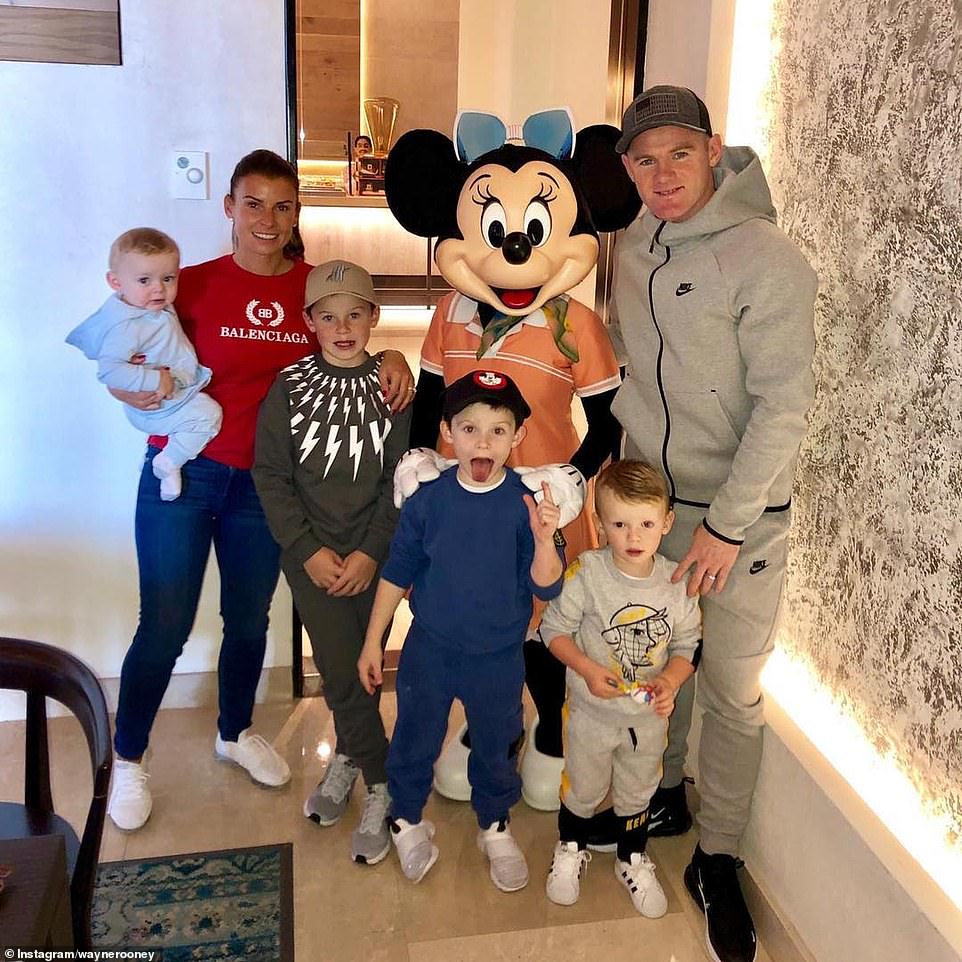 Happy days: Prior to her holiday, Coleen marked her 11th wedding anniversary to husband Wayne in an Instagram post 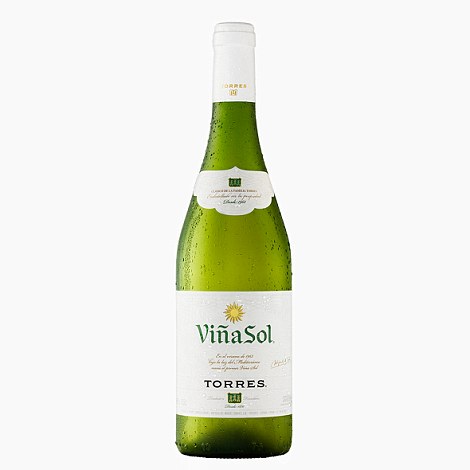 Bargain: Coleen reached for a bottle of Viña Sol, which markets for as low as £5.22

A live band played a medley of Frank Sinatra songs and enjoyed a £50,000 firework display. True to form, the couple reportedly decided against sophisticated fare, opting for a sit-down meal of pizza.

Their family have recently moved to Washington after a turbulent time in their marriage, but Coleen confessed that they are rebuilding their relationship with date nights, including regular cosy trips to the cinema.

Earlier this year, sources revealed details of their determined efforts: ‘Coleen is adamant Wayne can change his ways and she is helping him get out of the hole he’d fallen into. This holiday marks a fresh start and things are going well…

‘First to go was his video gaming obsession and Coleen is demanding he spend more time with the family at home, rather than in a different room staring at a screen… 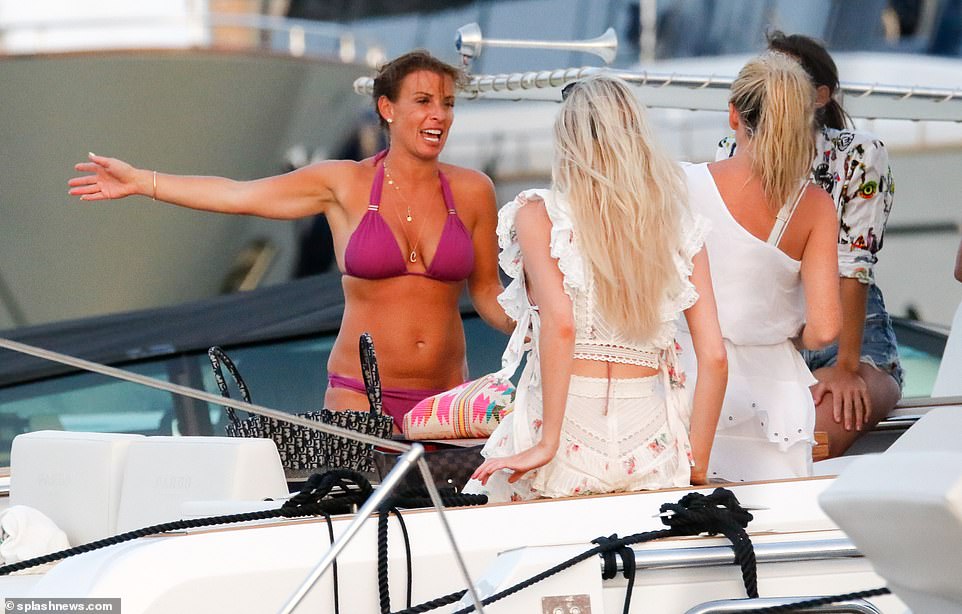 Animated display: Coleen was gesticulating wildly while entertaining her pals who looked on in awe 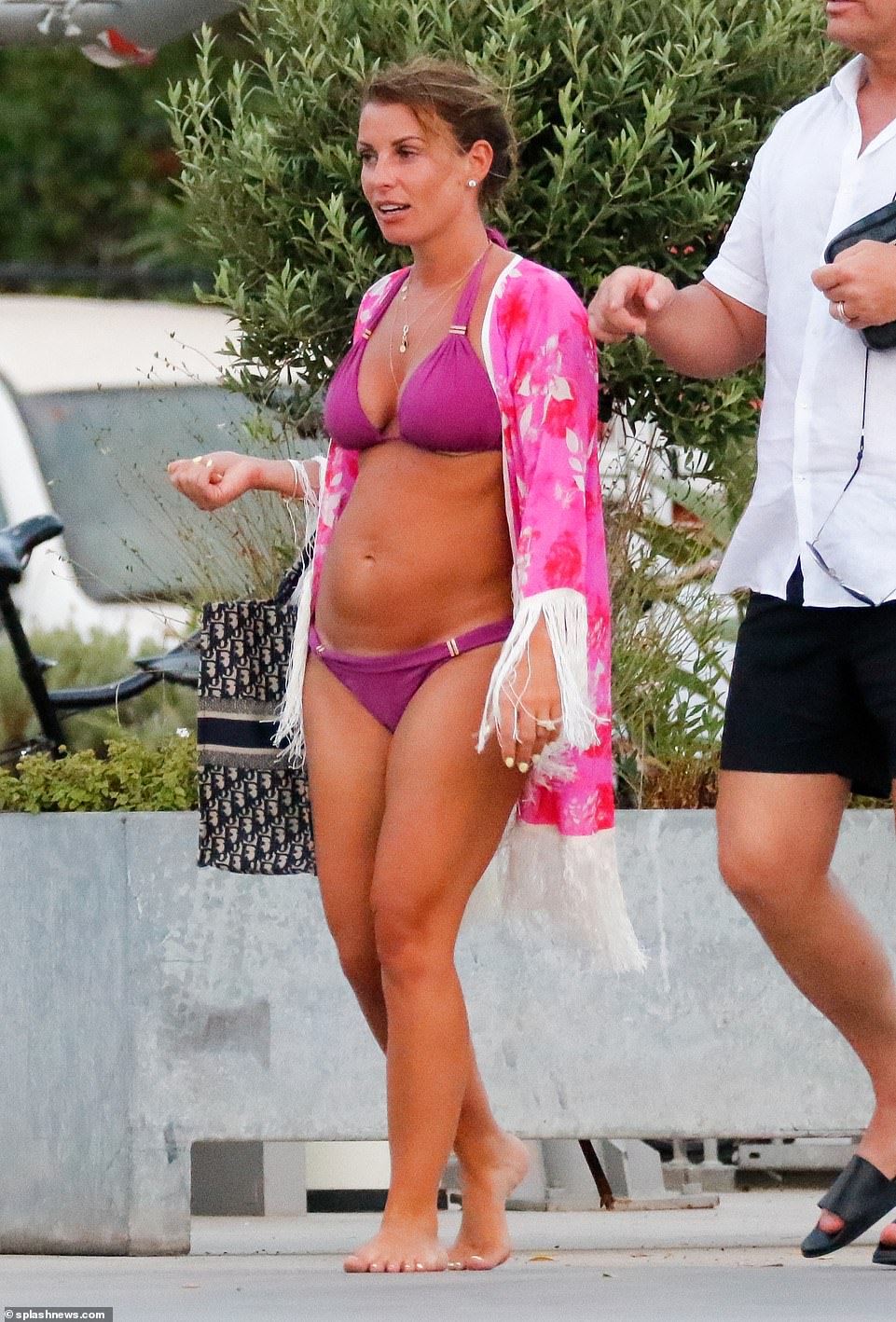 Barefoot beauty: She shunned her shoes in a move that showed off her flawless French pedicure

‘She is desperate for Wayne to end his childish antics and start growing up… Now she wants family dinners at home for them to connect and is making sure she sets aside time to spend with Wayne alone.’

Earlier this year their marriage was said to be ‘hanging by a thread’ after the sportsman was spotted drinking with barmaid Vicki Rosiek until 2.30am. The January incident came just weeks after he was arrested for being drunk at an airport in Washington DC.

The former Everton striker also faced court appearance for drink-driving in 2017. He was arrested for driving party girl Laura Simpson, 30, in her VW Beetle in Cheshire while three times over the limit.

He was handed a two-year driving ban and 100 hours of unpaid community work, apologising for an ‘unforgiveable lack of judgement’. 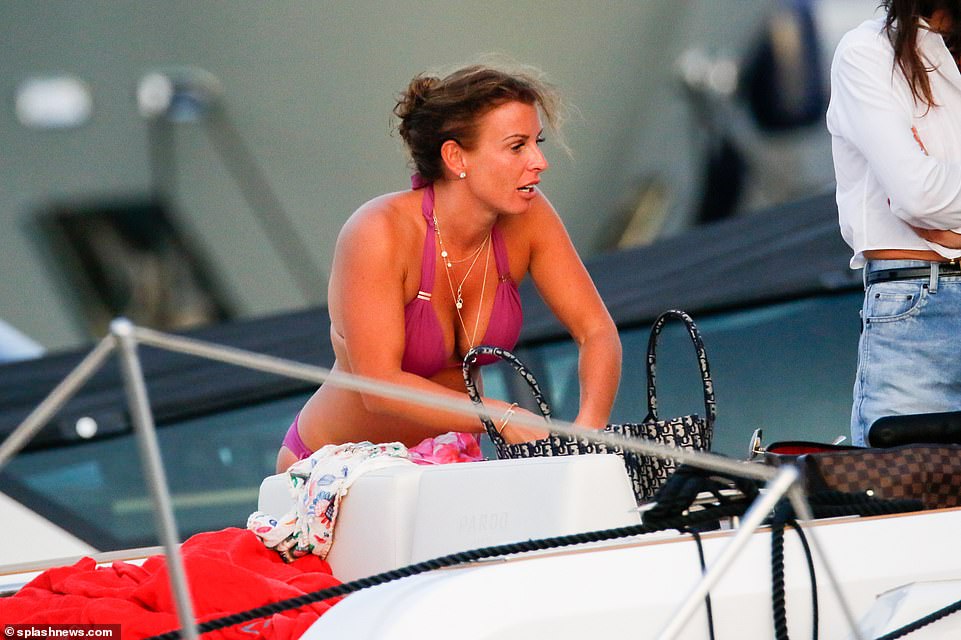 Bag it up! Coleen was rummaging in her designer tote – which markets for £2,100 – during her time on the boat 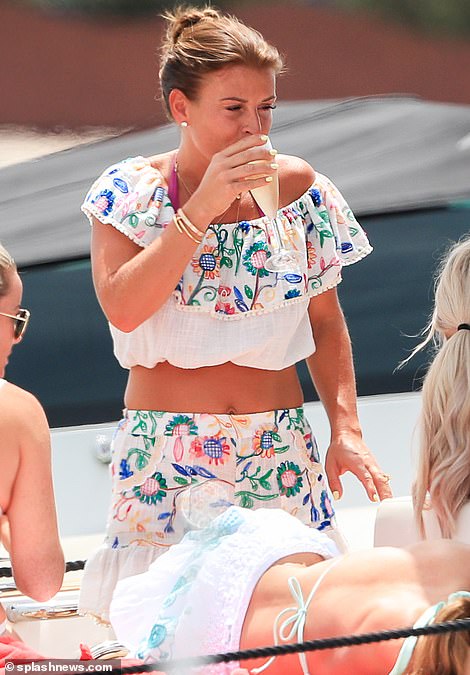 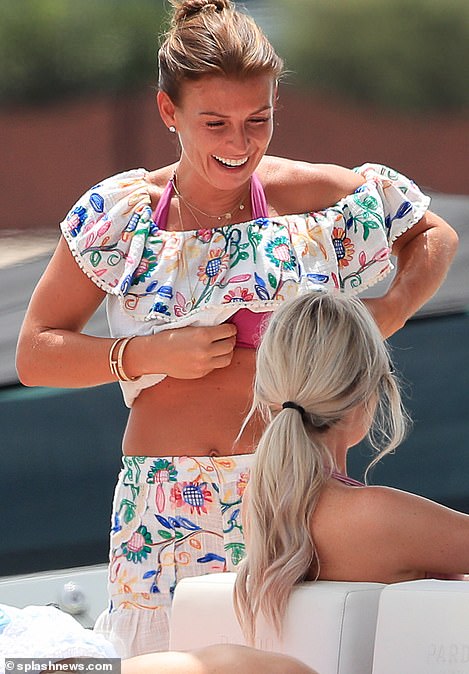 Sipping away: She was living it up while sipping champagne – shortly before turning to her £5 Vina Sol