Posting nine photographs of herself, her husband Wayne and their four boys over the years, Coleen, 35, told her spouse of 13 years: ‘Happy Fathers Day @waynerooney. Thanks for everything you do for our boys, we love you.’

One of the photos saw Wayne and his children standing on a football pitch while wearing England kits, while many more appeared to show the family at home.

Wayne beamed a smile in each of the snaps, with his young lads also looking happy.

Coleen only featured in one photo, and was smiling from ear-to-ear in the picture while holding her son in her arms alongside Wayne.

It comes a week after Coleen shared a sweet tribute to Wayne on their 13th wedding anniversary, revealing they had celebrated the day with a family day out in London.

Sharing a photo of the pair standing outside London’s Southbank Centre in the sunshine, Coleen captioned her post: ’13 years married! Happy Anniversary @waynerooney.’

In a photo shared by Wayne, the couple beamed while posing with their four sons.

Coleen looked typically stylish in a luxury Chloé T-shirt and kept the sunshine at bay behind circle sunglasses. 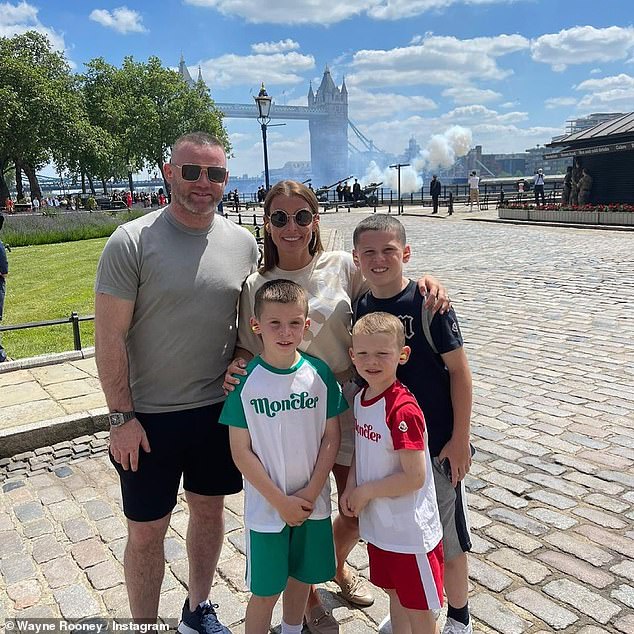 Family: Coleen marked her and Wayne’s thirteenth wedding anniversary last week with a sweet Instagram snap, revealing they celebrated the day with a family day out in London

She wore her glossy hair loose and lovingly rested her hands on her sons’ shoulders.

Childhood sweethearts Wayne and Coleen met at school when they were 12, before they started dating after they finished school at 16.

They tied the knot in a romantic ceremony in Italy, with wedding said to have cost an estimated £5m.

After both a civil and church ceremony – and three dress changes for Coleen – the newlyweds celebrated at the Villa Durazzo, for a champagne reception, which continued on until 4am.

A live band played a medley of Frank Sinatra songs and enjoyed a £50,000 firework display. True to form, the couple reportedly decided against sophisticated fare, opting for a sit-down meal of pizza.

Since then, the pair have welcomed four sons and have battled through their fair share of hardships, but have continued to stand by one another.

Helen has previously said that the glare of the media spotlight was unwelcome and uninvited and came only after Jenny went to the tabloids to name her. 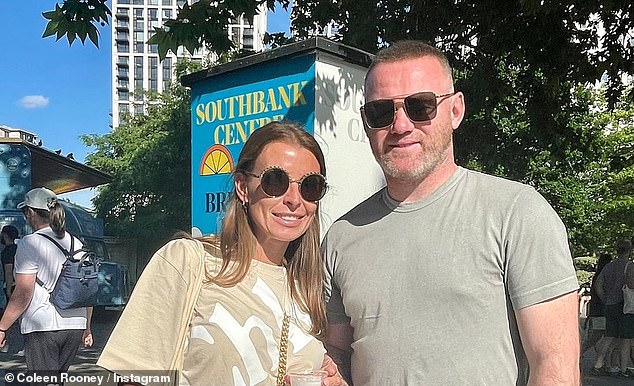 Parents: In another snap, the pair stood outside London’s Southbank Centre in the sunshine, with Coleen writing: ’13 years married! Happy Anniversary @waynerooney’

In 2019 the former England captain’s marriage was said to be ‘hanging by a thread’ after he was spotted drinking with barmaid Vicki Rosiek until 2.30am.

In 2017, just before he was due to move to the US, the former England captain apologised for his ‘unforgivable lack of judgement’ as he was banned from driving for two years and given 100 hours’ community service after a drinking heavily with a party girl.

He was stopped by police while driving 29-year-old Laura Simpson home from a night out in her Volkswagen Beetle in Wilmslow, Cheshire, at 2am on September 1. Rooney was stopped because Miss Simpson’s car had a faulty brake light.

Coleen was then pregnant with the couple’s fourth child – and was seen without her wedding ring. For a period it appeared they were living separately but Mrs Rooney took him back after his apology. 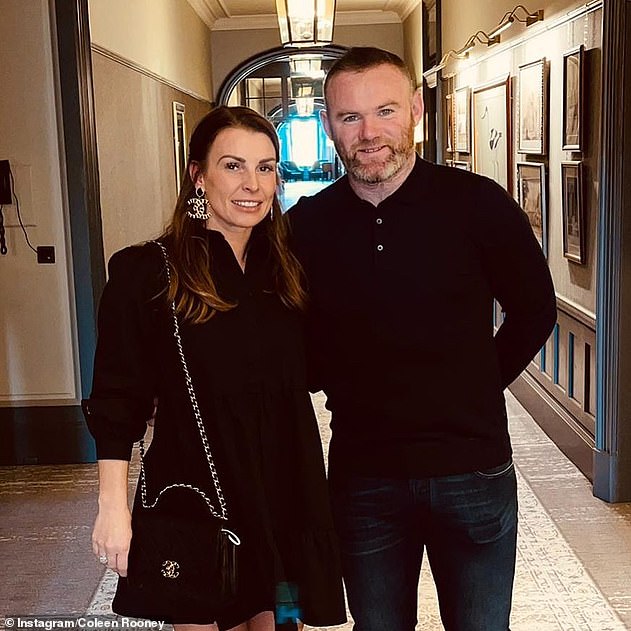 Young love: Childhood sweethearts Wayne and Coleen met at school when they were 12, before they started dating after they finished school at 16