A disgusted Coles shopper feared she had been sold ‘mouldy’ prosciutto when she found crusty black marks on the cured meat, but Italian food fans quickly explained it was likely just dried salt.

The Italian delicacy was dotted with dark blemishes, horrifying Lauren Phillips, from Melbourne, who took to social media to ask for advice.

Other users on Facebook suggested it was actually just dried salt from the curing process – but delicatessen workers said she shouldn’t have been sold it anyway.

‘Just bought this prosciutto from the deli at Coles. Came home and it looks like there’s mould on it. Thoughts?’ wrote Ms Phillips on Facebook group, Budget Friendly Meals Australia.

The Italian delicacy was dotted with dark blemishes (pictured), horrifying Lauren Phillips, from Melbourne, who took to social media to ask for advice

Several other users agreed with her but many pointed out it was probably a normal part of the curing process.

One user Amy Lee explained: ‘I used to buy prosciutto back in Europe for years, and many times it had bits and pieces like that. It is not mould.

‘Prosciutto is an uncooked ham, which takes anywhere from 1-2 years until it is ready to eat – salt is used to dry-cure it in which acts as a preservative

‘It inhibits bacteria growth and keeps the meat from spoiling. That is why we are able to consume raw meat even after two years of it hanging in a room.

‘Sometimes nitrates are also added for extra curing protection which make it impossible for bacteria growth. They often rub the meat in pepper and other spices.

‘Many times the outer curing layer gets into the layers of the meat if there are any uneven surfaces, making dark marble like bits and pieces inside the ham when cut.’

Ms Lee added: ‘Honestly, I cannot count how many times I’ve eaten prosciutto like that and I am still alive.

‘I think I’ll go to Coles tomorrow to get some now!’ 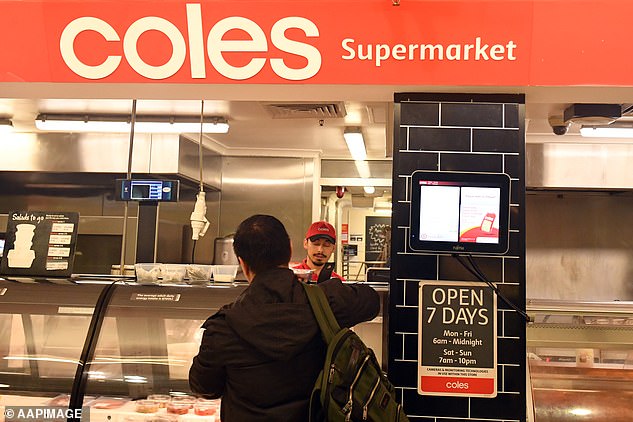 Another user said she worked on a delicatessen counter and agreed it was part of the curing process – but she should not have been sold it as it was ugly.

‘I work deli and every few chubs of prosciutto will have that part in it, it really is just from the curing and it’s not mould nor will it kill you,’ she wrote.

‘We never give it to customers though because it looks terrible so I am surprised they gave it to you.’

Ms Phillips later updated that she had taken the suspicious cut of meat back to Coles and was given a full refund and an apology.

Daily Mail Australia has contacted Coles for a comment.