Collection of German porcelain found by the Monuments Men before Nazis destroyed it sells for $13.6M

Stunning collection of German porcelain that was found by the Monuments Men before it could be destroyed by the Nazis sells for $13.6 million, 76 years later

A stunning collection of German porcelain rescued by the Allied ‘Monuments Men’ before it could be destroyed by the Nazis has sold for more than £10million ($13.6 million). The hoard of Dresden antiques was acquired by industrialist Dr Franz Oppenheimer and his wife, Margarethe, during the 1920s and 30s. The Jewish couple fled their home in Berlin for the relative safety of Vienna in 1936 as the Nazis began persecuting Jewish people in Germany. The Oppenheimer’s ended up emigrating to the US the day before Austria was annexed by Germany in 1938, but not before they sold off their fabulous figurines and ornaments for bargain prices to stop them falling into the hands of the Nazis. 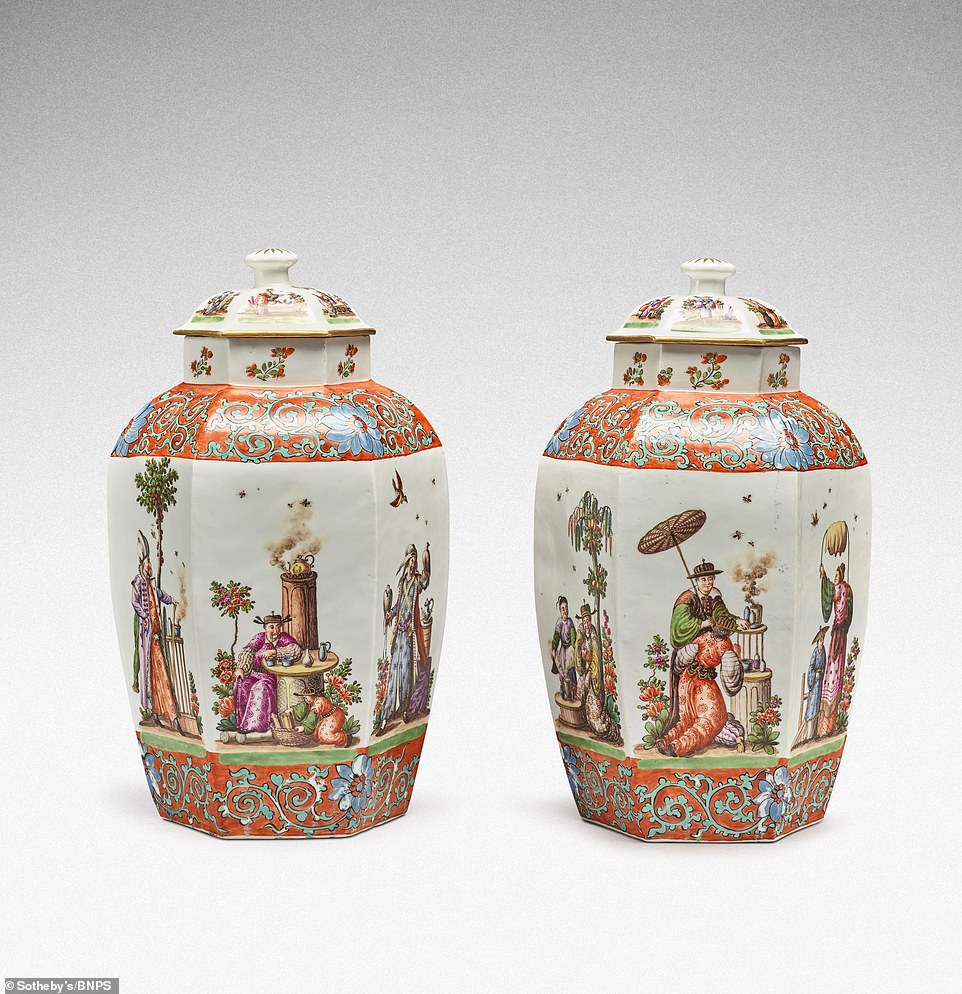 Ultimately, the collection was found in the Netherlands by a member of the SS who acquired it for Adolf Hitler in 1941. To prevent millions of pounds of looted artwork from being damaged by Allied bombing raids, the Nazis stored much of it in salt mines across southern Germany and Austria. Pictured: A unique pair of Meissen Augustus Rex hexagonal vases and covers sold for £277,000 ($377,400). 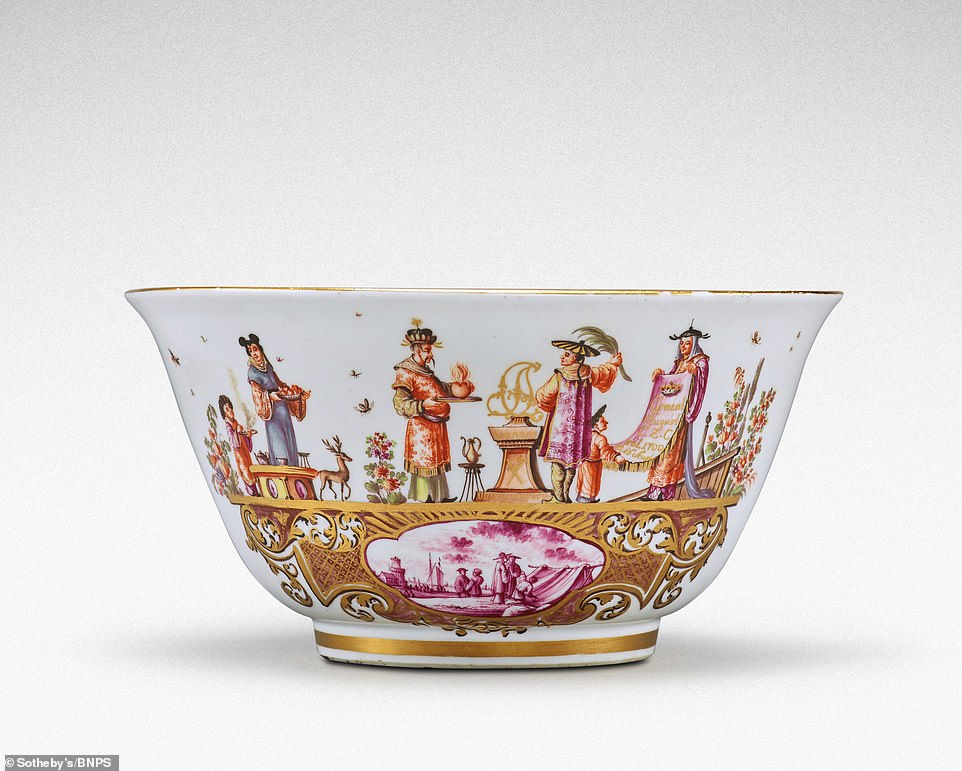 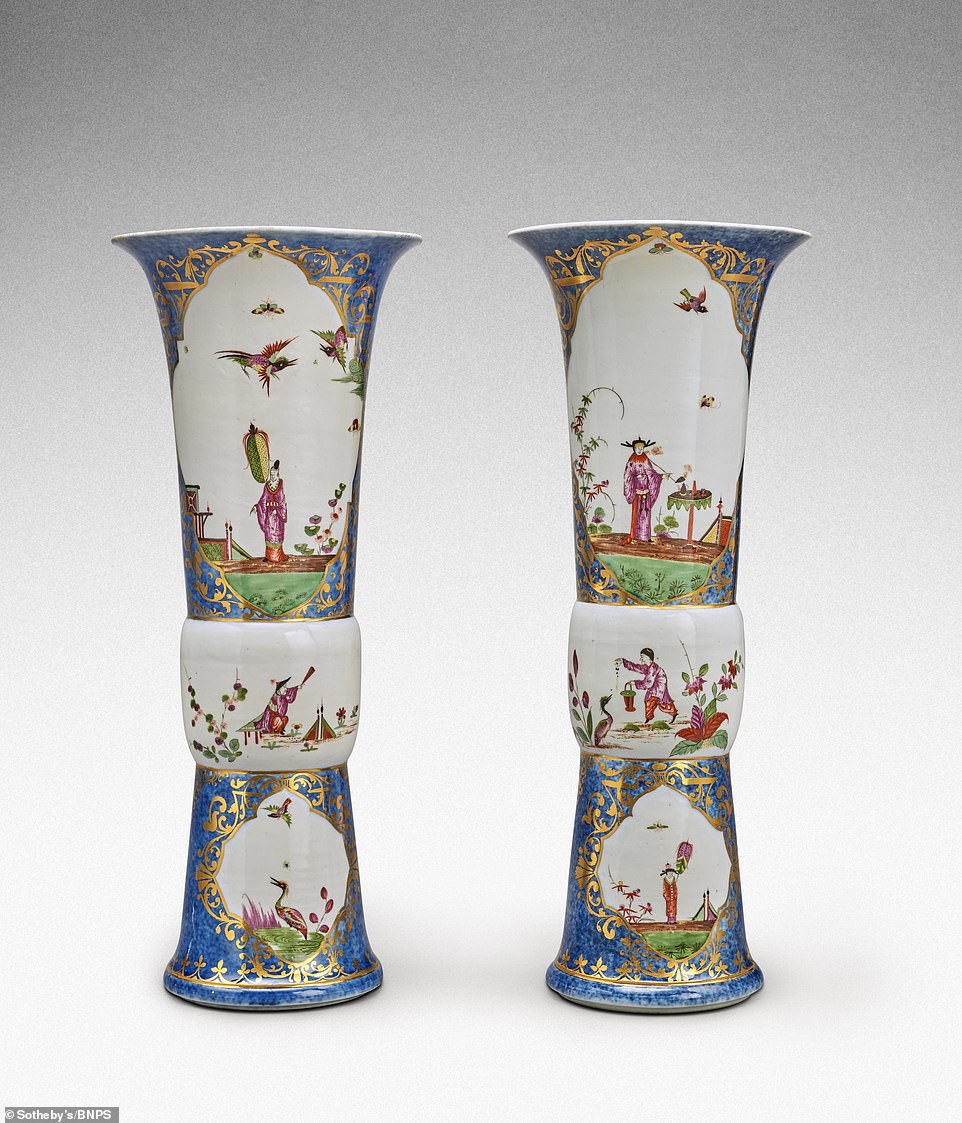 The Jewish couple were forced to hastily sell their collection as they fled the Nazis. Pictured: A very rare pair of Meissen Augustus Rex underglaze blue-ground beaker vases sold for £635,000 ($865,200). 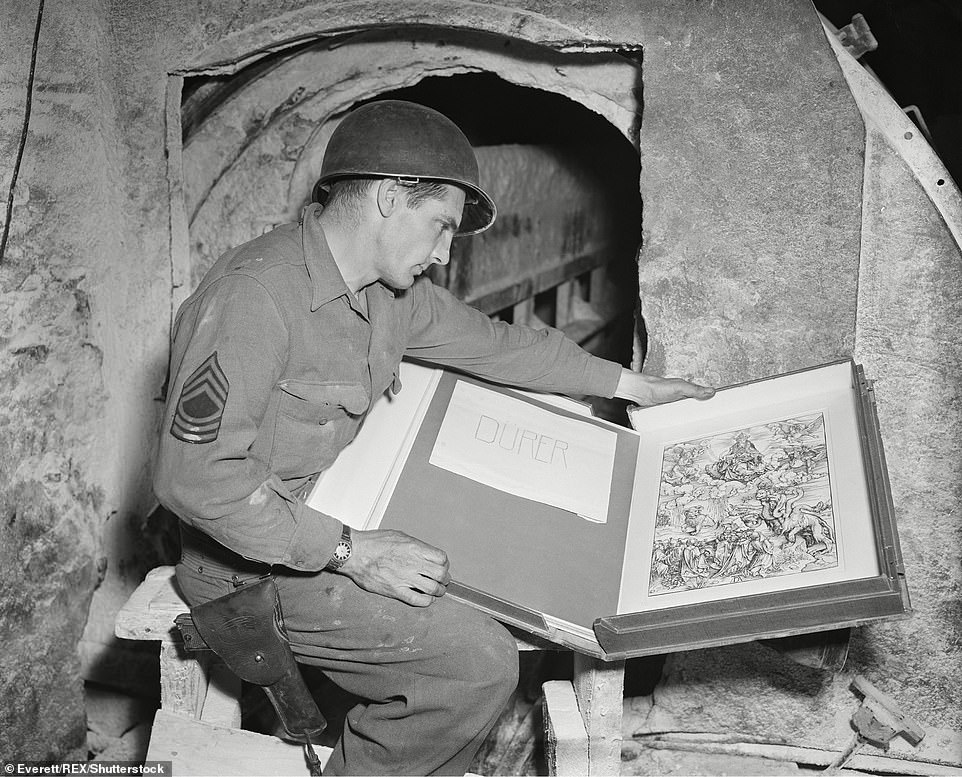 The Monuments, Fine Arts and Archives program was an Allied unit during the Second World War whose aim was to recover looted pieces of art. Pictured: U.S. Army sergeant Harold Maus inspects a Durer engraving hidden in the Merkers salt mine in May 1945. 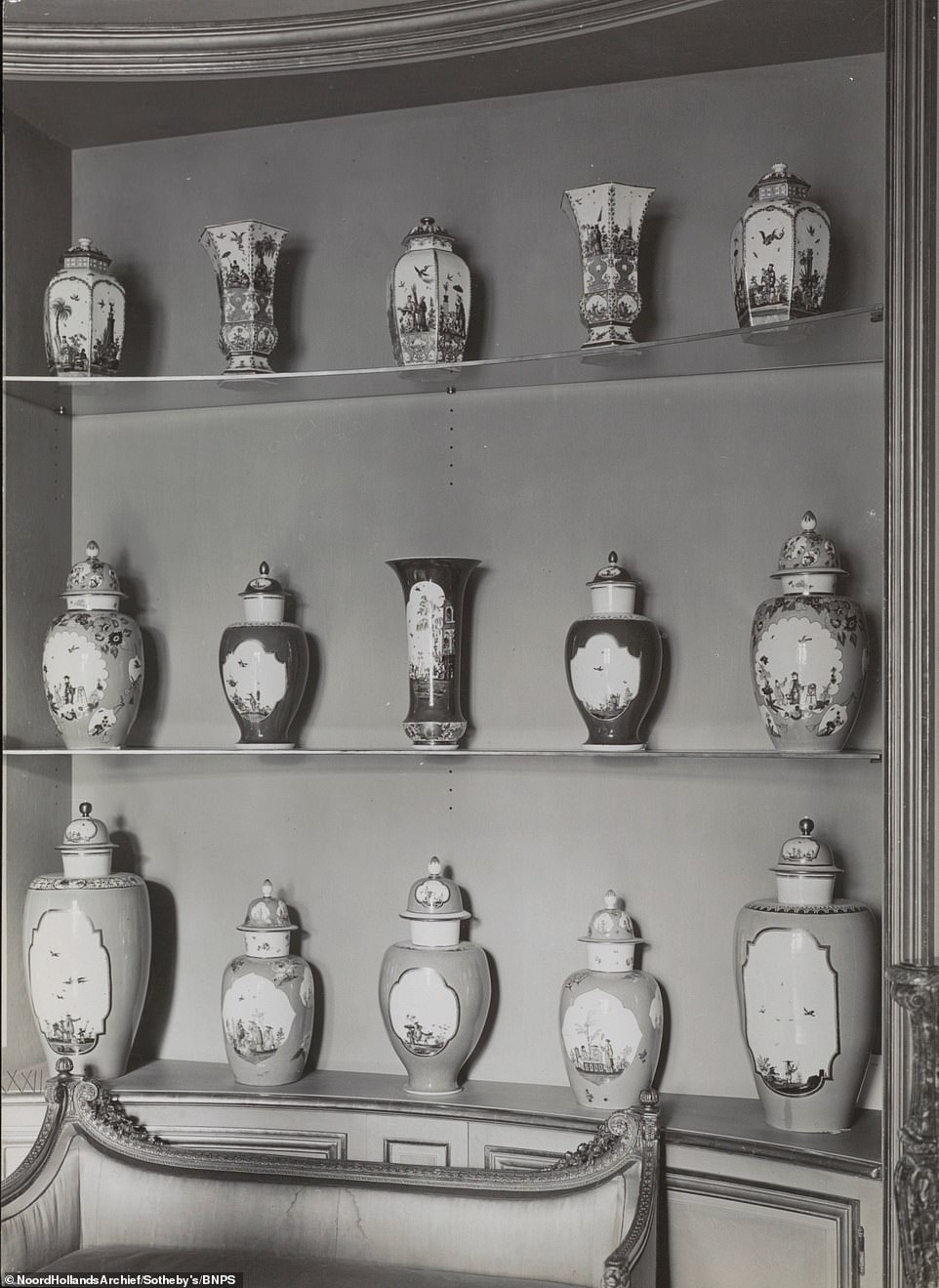 Items similar to those that formed part of the Oppenheimer’s collection are pictured in this archival photo. 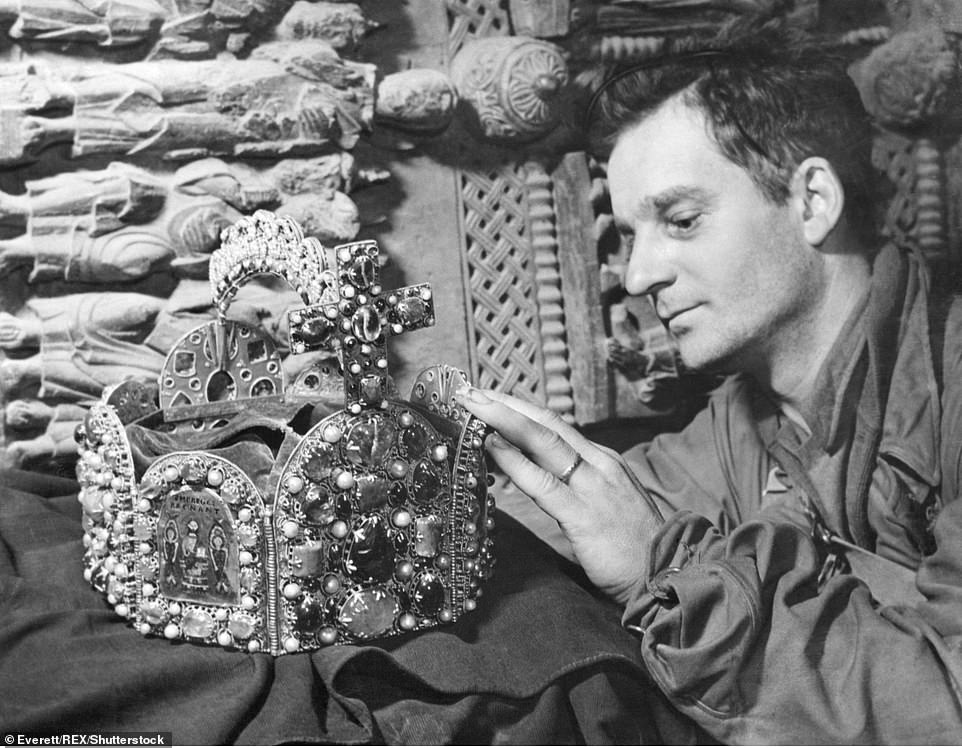 During the Third Reich, agents working on behalf of the Nazi Party engaged in the organized looting of museums and private collections in occupied countries. Pictured: A U.S. Soldier with Crown of Charlemagne in a cave in Siegen, Germany. 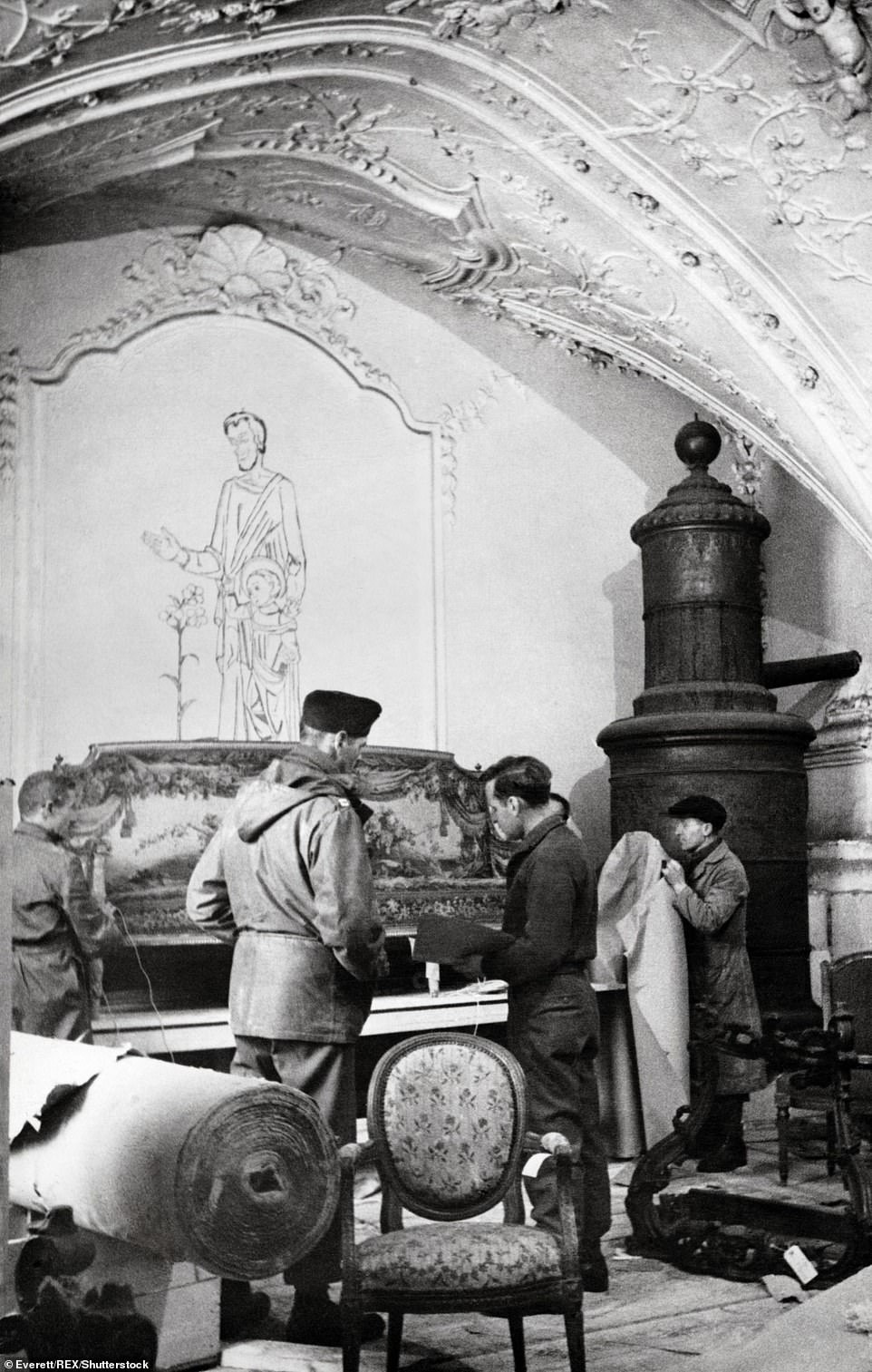 The work of this special unit had been largely forgotten by the general public until their efforts were featured in art scholar Lynn H. Nicholas’ book in 1995. More books and eventually a feature film, starring George Clooney and Matt Damon, followed. Pictured: The Monuments Men with furniture from Rothschild Paris residences looted by Germans. 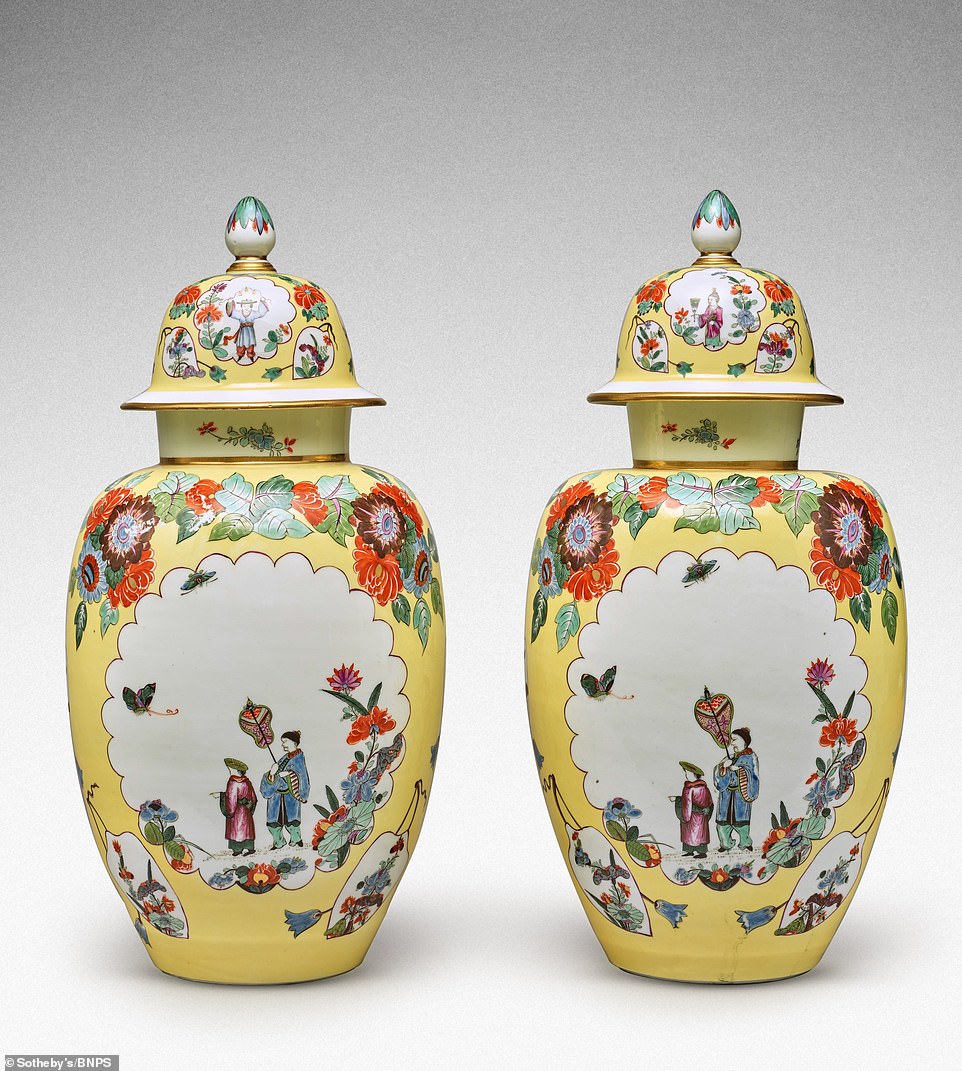 More than half of the items were bought by the Rijksmuseum, which had previously owned them. Pictured: A pair of Meissen Augustus Rex yellow-ground baluster sold for £502,000 ($684,000). 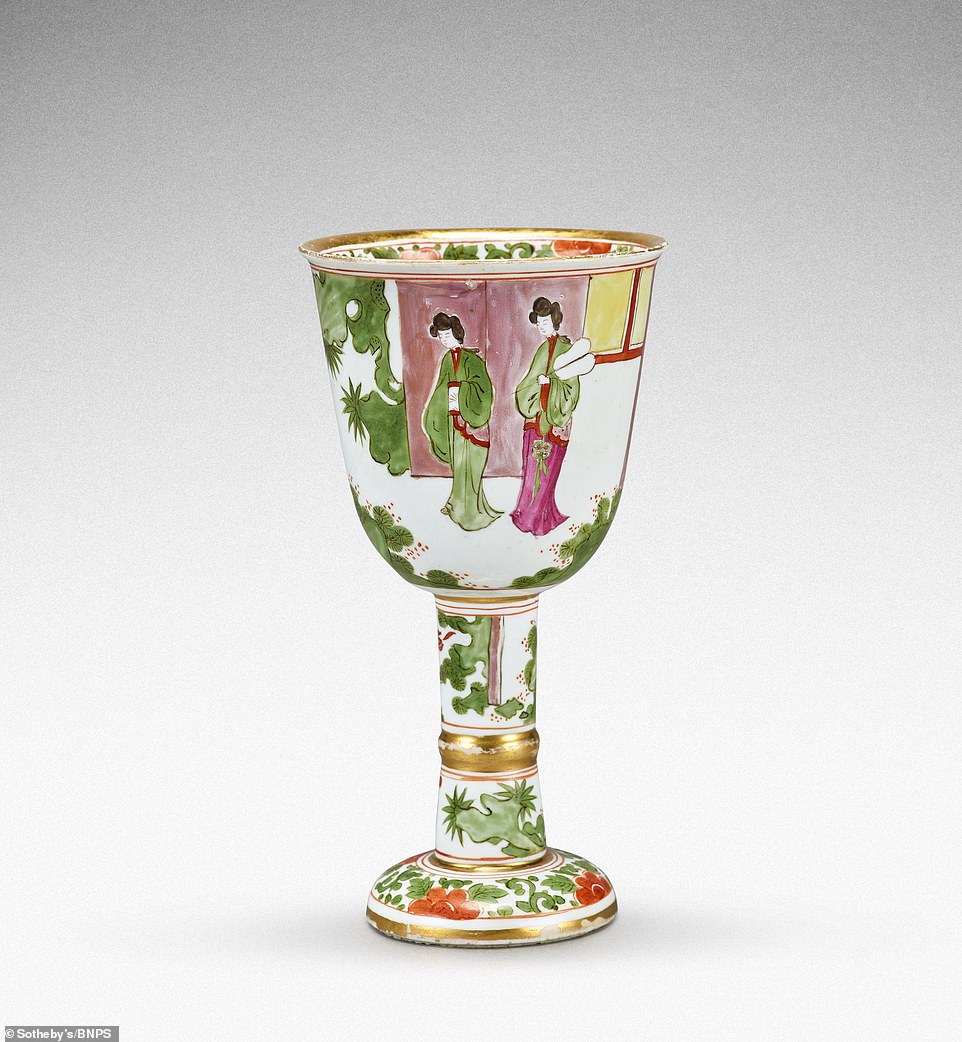 The Rijksmuseum returned the items to the descendants of the Oppenheimers after a 2019 recommendation by the Dutch Restitution Committee, which found that they were the rightful owners. Pictured: An extremely rare Meissen famille verte goblet sold for £387,000 ($527,300). 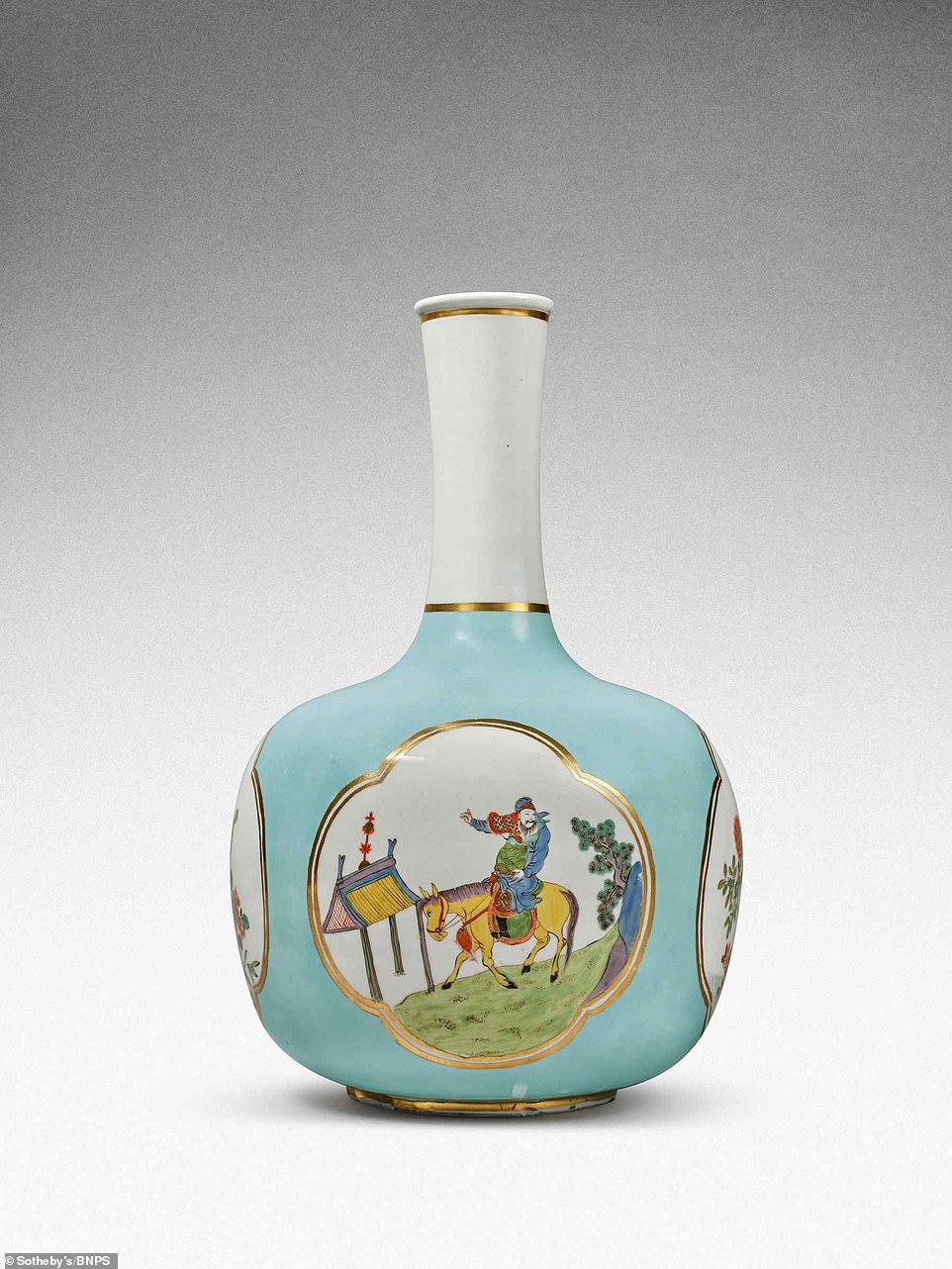 Sotheby’s had expected the 117-piece collection to fetch a couple million dollars, but it was deemed so rare that almost every item sold for over its asking price. Pictured: A rare Meissen Augustus Rex vase that sold for £458,000 ($624,000). 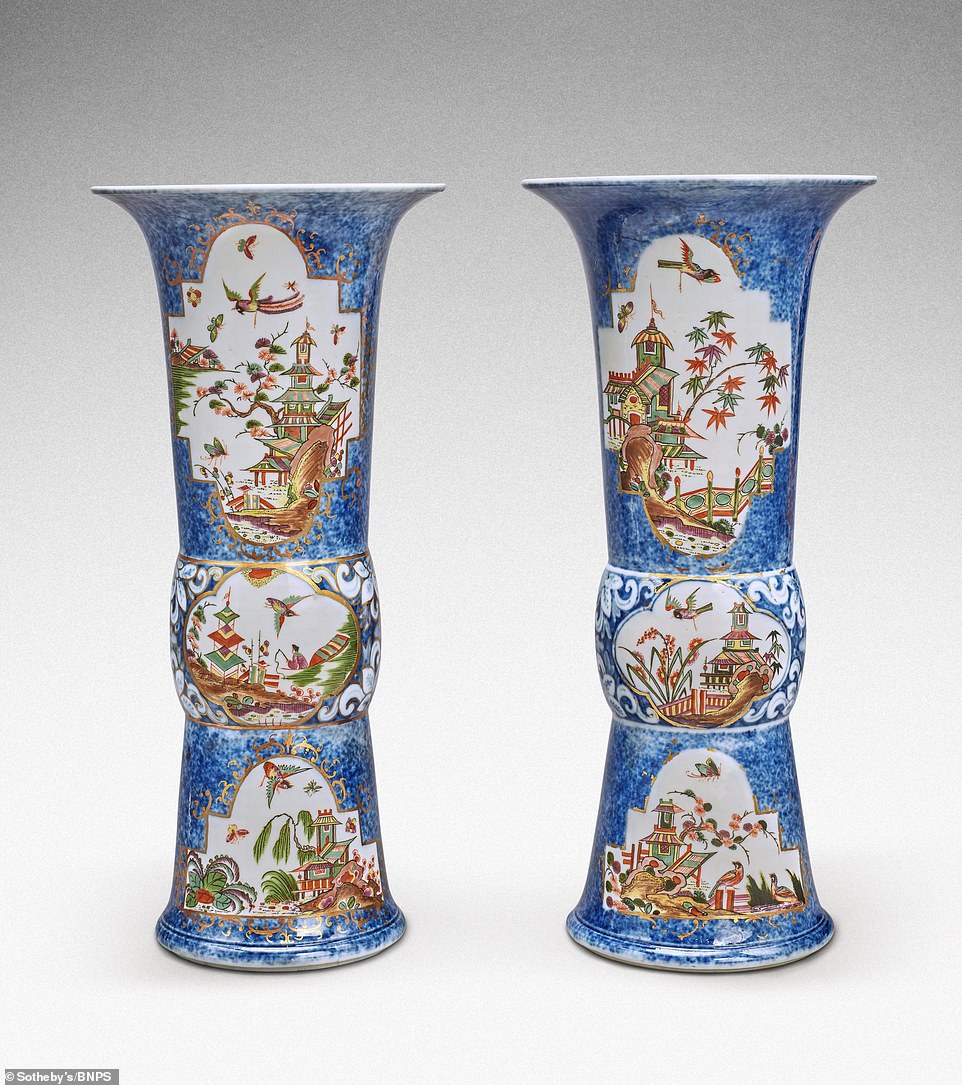 The collection was held in various Dutch museums for 70 years before being returned to the original owners’ family. Pictured: An extremely rare pair of Meissen Augustus Rex underglaze-blue-ground beaker vases sold for £901,000 ($1.23million). 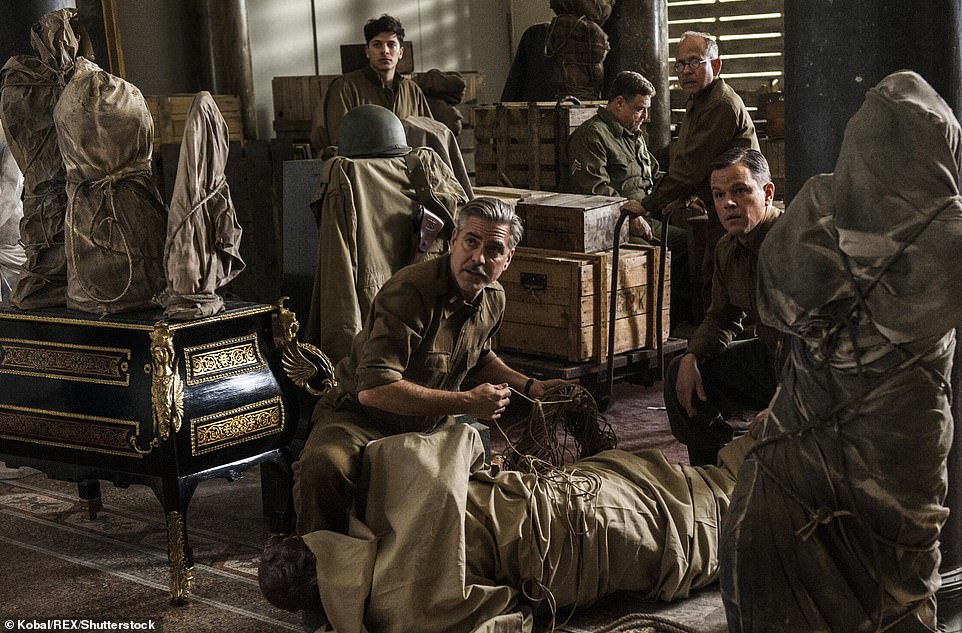 Pictured: George Clooney (second from left) and Matt Damon (right) played fictionalized members of the Monuments Men in a 2014 film of the same name.