Chile beat Colombia and a two-and-a-half hour break during an electrical storm to reach the Copa America Centenario final, where they face Argentina for the second year running.

Last year’s champions were convincing winners in Chicago, although they were made to wait for victory after racing into an early two-goal lead, after lightning, heavy rain and the threat of tornados forced the players to stay inside after half-time, while fans took shelter in the stadium.

‘Dangerous weather is approaching. Seek shelter immediately,’ read ominous messages shown on the big screens at Soldier Field, so supporters headed to the concourses to drink and sing while the Windy City rode the storm out. 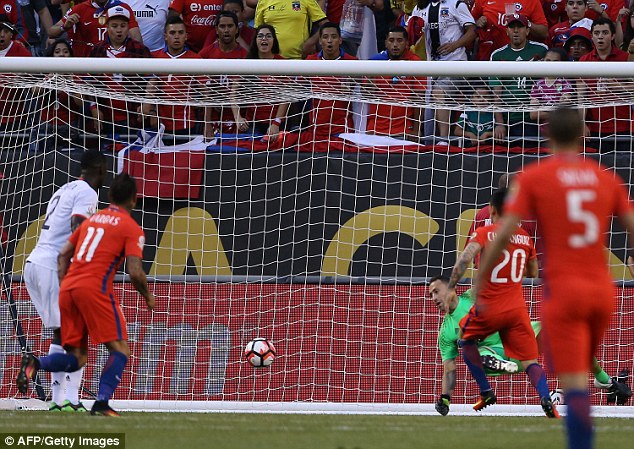 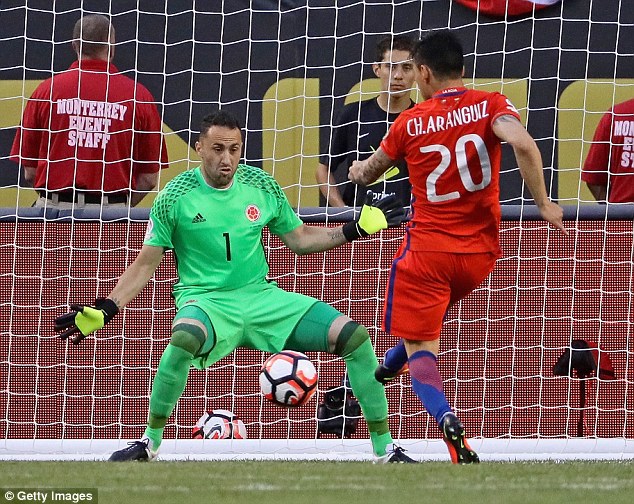 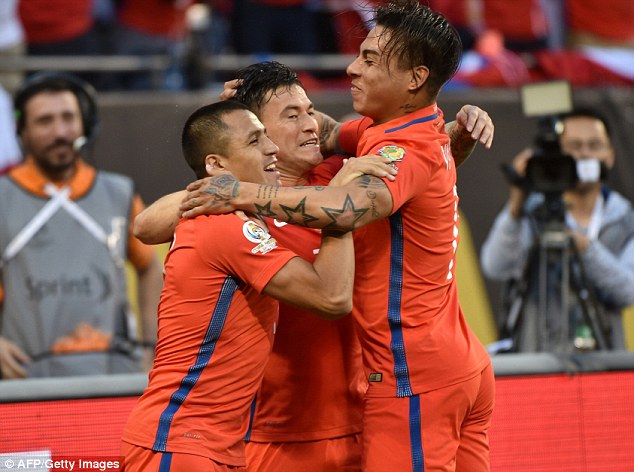 Chile had picked up where they left off after the 7-0 rout of Mexico, while Colombia started embarrassingly slowly. It took just seven minutes for La Roja to open the scoring, even without suspended lynchpin Arturo Vidal, who would have loved the wet and wild conditions in the second half.

Juan Antonio Pizzi’s men were pressing high up the pitch and it was clear from the opening stages that they planned on controlling the game. When Jose Pedro Fuenzalida piled down the wing and lofted in a neat ball to a deep position, Juan Cuadrado headed it back across his own box foolishly, and Charles Aranguiz was there to fire home from close range.

The goal didn’t make Chile ease off and four minutes later they doubled their advantage. This time Fuenzalida was the scorer, knocking the ball in after Alexis Sanchez’s shot was tipped on to the post and bounced back to the midfielder.

Claudio Bravo, who has had a bad tournament for Chile, arguably guilty in one way or another for every goal they had let in until now, was back to his best form as he denied Roger Martinez, after the man standing in for the injured Carlos Bacca got behind the defence, following James Rodriguez’s pass. 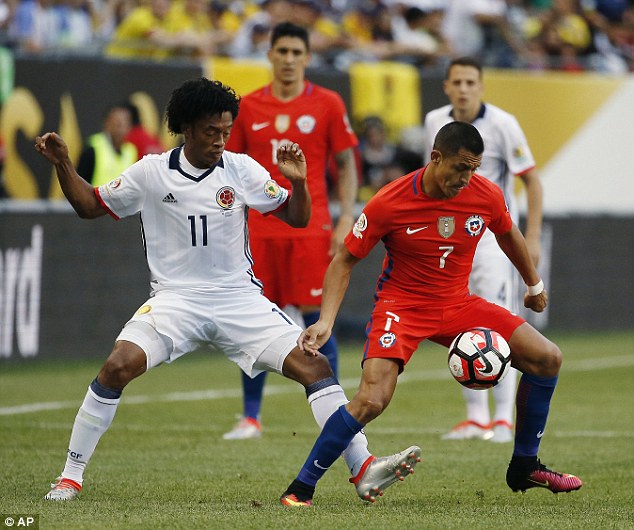 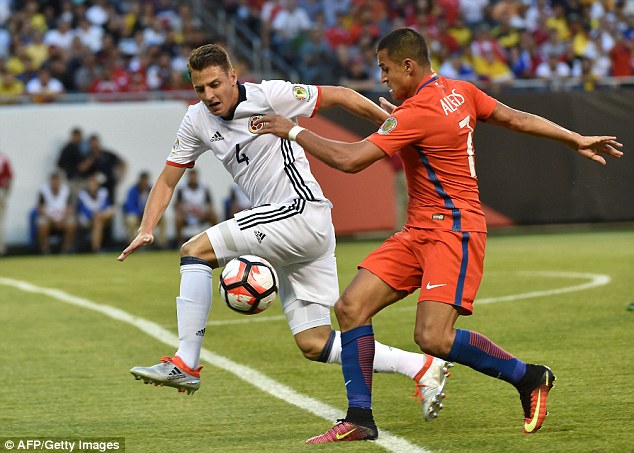 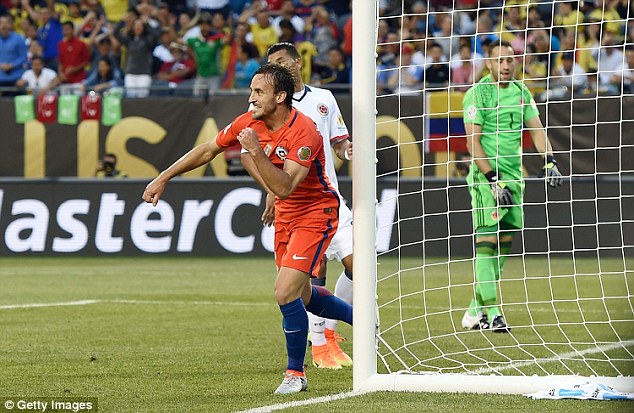 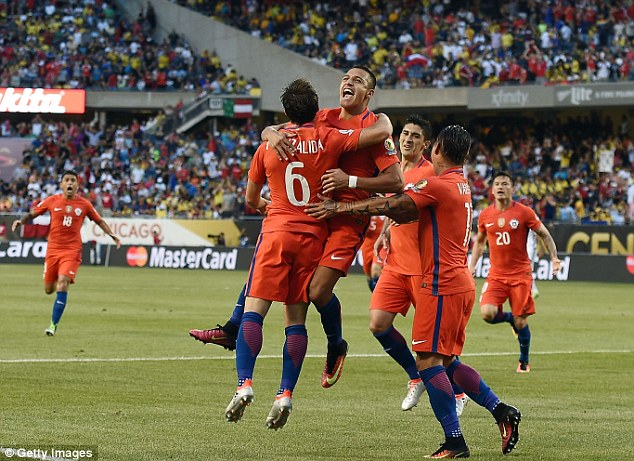 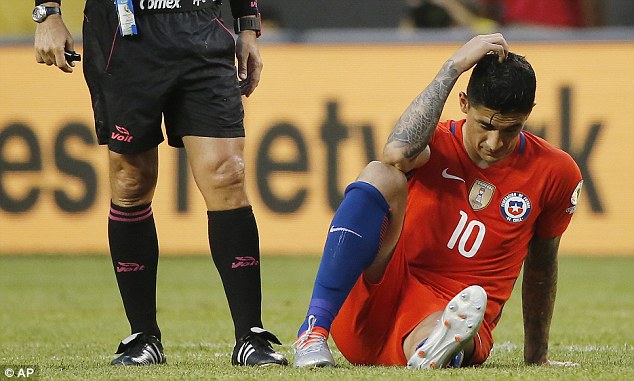 He made a double save before half-time, denying Carlos Sanchez and then Edwin Cardona after Cuadrado crossed for his team-mate. Colombia improved as the half went on, but the damage was pretty much done. In football terms, at least – the storms were just beginning.

With lightning and heavy rain starting the second half was delayed, then delayed again and again, with fans told to shelter in the concourses for their own safety.

Tornados had been spotted elsewhere in the state and the bad weather left the pitch in shabby condition, with a dozen men needing to brush the water off it with contraptions halfway between a washing up sponge and a broomstick.

There were discussions about holding the rest of the game on Thursday afternoon, but eventually the weather began to abate. 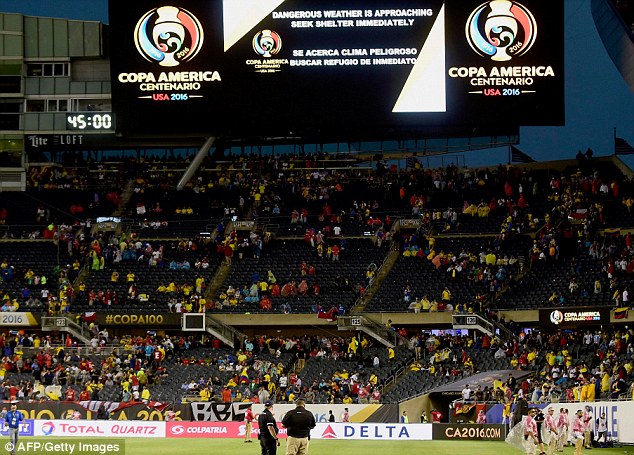 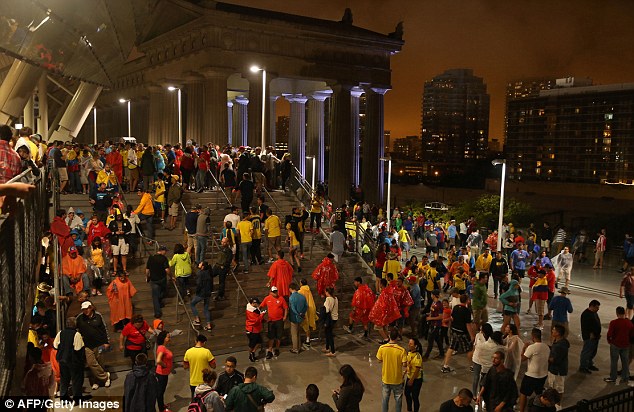 After the near three-hour wait play resumed, but Colombia midfielder Sanchez may as well have not come out at all. Just over 10 minutes after the restart he clattered into Aranguiz and was booked for a second time. It was a little insensitive from the referee, given the slippery pitch.

Between that and Mauricio Isla tripping Daniel Torres in the box, Colombia can consider themselves unlucky, but the truth is Chile were the better team before the storm and, after it, neither side was clearly on top, as reflected by when the goals were scored.

Some smart saves by Bravo kept Colombia at bay, although Ospina was also called into action on occasion, but Sanchez’s red card made Colombia’s comeback chances slim.

This will go down as a good tournament performance by them, but an even better one from finalists Chile and if they can beat Argentina again in the final, it will be a huge triumph for coach Pizzi, after taking a job many believed was extremely tricky, stepping into Jorge Sampaoli’s shoes. 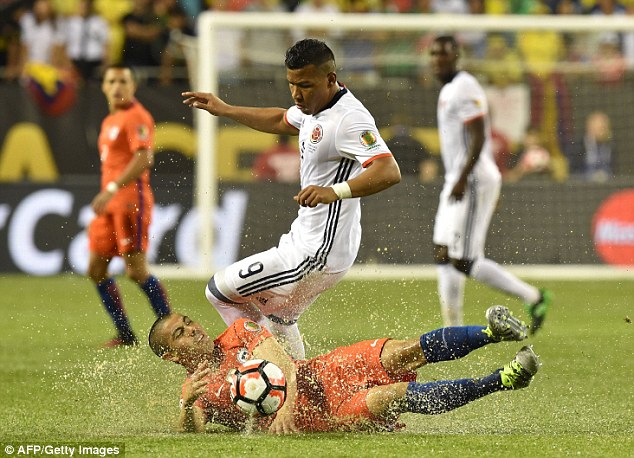 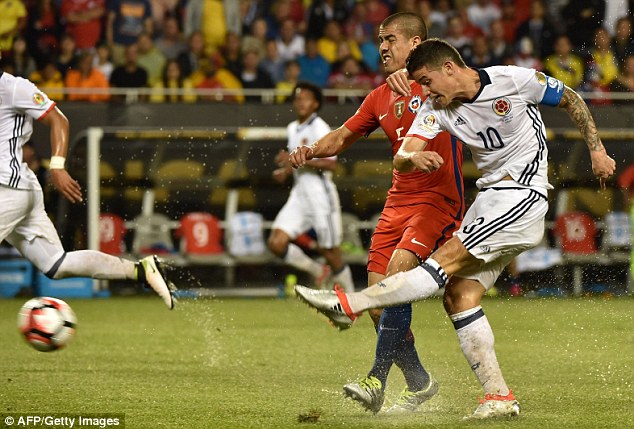 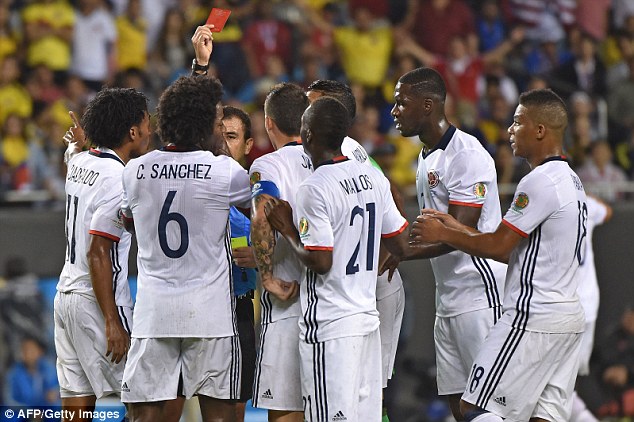 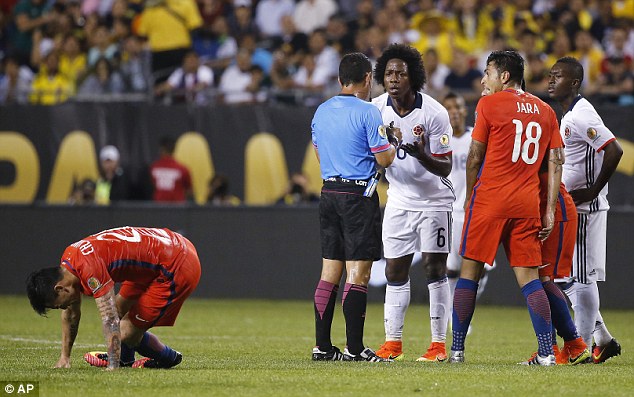