Colombia has undergone a revolution. Yes, the dark days of rule by drug traffickers (or ‘Narcos’) and guerrilla fighters might never be forgotten – but the country has moved on.

This week, Juan Manuel Santos, attended the first ever state banquet at Buckingham Palace in honour of a Colombian president, and gave Prince Philip a pen crafted from a bullet as a sign of peace.

The peace agreement with the FARC rebel group may be a work in progress but that shouldn’t put you off.

A wonder: Cartagena is one of Colombia’s star turns – a walled old town that feels European

The country has been warmly welcoming back tourists for at least the past five years and you can now fly direct from London, Heathrow to the capital Bogota with the national airline, Avianca.

Bogota is as busy as London (with a similar population of around eight million), but even more colourful, noisy and fraying at the edges. Set between mountains and at over 2640 m above sea level, it can be chilly and damp.

The old part of the city, La Candelaria, is home to the Gold Museum and a gallery devoted to Fernando Botero, one of Colombia’s most famous contemporary artists.

Botero blows air into his subjects with a paint brush. Sunflowers look like puffy pin-cushions, and bananas like marrows. Bottoms are simply enormous.

After two weeks on the Colombian diet – heavy on meat, and a close friend of the deep-fat fryer – you will understand why.

In Bogota, they serve hot chocolate with a lump of cheese, just for good measure. Try it in Puerta Falsa, a cosy timber-framed restaurant in La Candelaria. 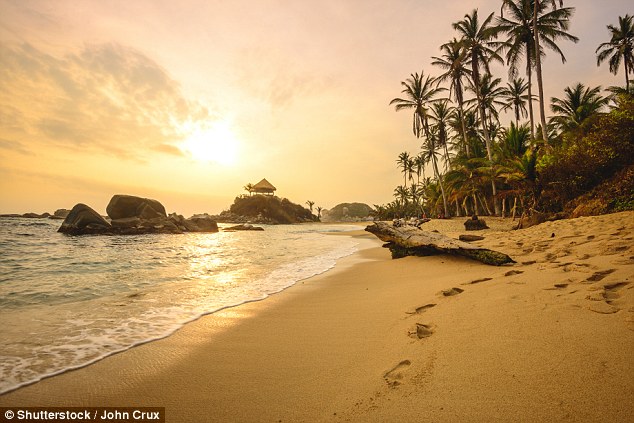 From Bogota, we head inland to Armenia, the coffee region, which is gloriously green with brilliantly exotic birds. It is also blissfully warm.

Our hacienda, Casa el Delirio near Montenegro, is a harmony of dark wood and old coffee machines, with a pool, lovely grounds and a cook, Judith, who doesn’t speak a word of English but makes us feel right at home.

Coffee is the theme of this region – but whatever you do, skip the National Coffee Park. It’s known as Colombia’s Disneyland – but most visitors will feel short changed.

The Cauca Valley is more untamed. Mountains rise above, clouds descend and they serve a version of mulled wine, with passion fruit, cinnamon and the local firewater aguardiente.

We like pretty Filandia, with its viewpoint across the surrounding countryside, pastel painted Baroque church and chatty square (most towns have a Bolivar Square in honour of Colombia’s great hero, Simon Bolivar, who helped free the country from Spanish rule).

And Salento, which has a hippy feel, soaring views atop a 250 step climb and cheap restaurants. Our cheery guide Andres takes us to his favourite, El Rincon de Lucy, which serves a hearty ‘executive’ lunch for 7000 pesos (around £3). 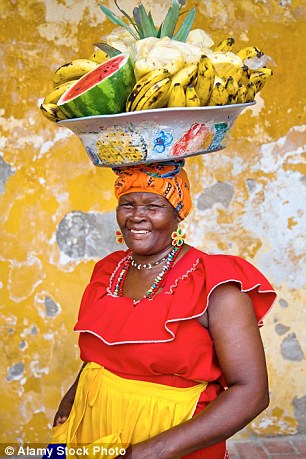 A destination exploding with life and colour, Colombia is not to be missed

Those watching the Netflix series Narcos, will know Medellin as the stomping ground of notorious drug lord Pablo Escobar. In 1989 Forbes estimated that his cartel made US$30 billion a year. He was responsible for thousands of deaths. Escobar was killed in the city in 1993 while fleeing across the rooftops.

Now Medellin is celebrated for its social revival – and beautiful women. It is a party town. Our hotel, the style conscious Charlee, is on the corner of Parque Lleras, where restaurants and bars buzz into the night.

The city certainly has a glamorous side. But like Rio, Medellin’s hills are home to some of its poorest people. Crime rates have improved since the introduction in 2007 of the Metrocable gondola system, which provides swift connection with the city. We ride it from San Javier to La Aurora and see every layer of the metropolis.

Fernando Botero was born in Medellin and 23 of his oversized sculptures make a statement in Botero Plaza.

A 24-hour stay does not nearly do it justice, but the Caribbean is calling.

Cartagena is one of Colombia’s star turns. The walled old town feels European, with brightly painted houses, balconies dripping with flowers and cartloads of exotic fruit lining the pavements. In the cooler evenings horses transport visitors by carriage.

Buy a beer and sit on the old walls to watch the sunset over the sea. Dip back into town for dinner – we like La Cevicheria – which serves freshest fish and is near our our hotel, Bantu, with its resident toucan, Tatu. Move on to arty Getsemani and Café Havana, with its live music and moody deco interior. It draws tourists – but still feels authentic.

The Colombians use a well known signal on the roads to indicate to police that everything is good – the thumbs up. Exactly my verdict

There are city beaches and islands off Cartagena but you’re better off continuing north to Santa Marta and beyond. Koralia is a peaceful retreat on the beach, a four-hour drive from Cartagena, and a short way from Tayrona National Park.

It’s back-to-nature, so no hot water or WiFi, thatched hut bedrooms, and the odd frog in the loo – but it’s comfortable, with deliciously healthy food and gnarly cocktails served in the beach bar. The sea is rough but the beach is empty, strewn only with washed-up coconuts.

The hotel can arrange excursions to Tayrona. We take a six-hour hike, marvelling at the gigantic boulders, the call of the howler monkeys and the site – El Pueblito – of the pre-Colombian Tayrona people.

The Colombians use a well known signal on the roads to indicate to police that everything is good – the thumbs up. Exactly my verdict.

Travel Facts: Plan your own tour of Colombia