Colour photos show the destitute and dilapidated living conditions of African American workers at the tail end of the Great Depression across the American South.

Sobering photos capture two children in rags standing beside their makeshift home, laborers picking cotton whilst accompanied by a young boy and his toy truck, and men waiting around a hastily-constructed bar for some offers of work to come in.

The photos were taken in 1941, when most of the United States was getting back on its feet after the turmoil of the economic collapse of 1929, one of the darkest periods in the country’s history.

For more than ten years the country was in a financial crisis which saw 15 million Americans out of work and nearly half of the country’s banks collapse. Whole communities found themselves suddenly unemployed and crops rotted in fields as farmers could no longer employ workers to harvest them.

Some form of relief and reform took place with the election of president Franklin D. Roosevelt in the 1930s as he brought in sweeping social reform and instilled a sense of community and confidence in the United States, often by way of his ‘fireside chats’ broadcast out to the general population.

The onset of World War Two in 1941 also provided a much-needed boost to America’s economy.

However, the repercussions of the crash were still affecting those in the country’s most poverty-stricken areas, particularly in the southern states of Georgia, Mississippi and Florida.

Day laborers picking cotton in Mississippi, accompanied by a small boy and his toy truck. The photographs were captured in 1941 by the U.S. Farm Security Administration (FSA), which sent out a group of America’s best photographers to document the effects of the Great Depression 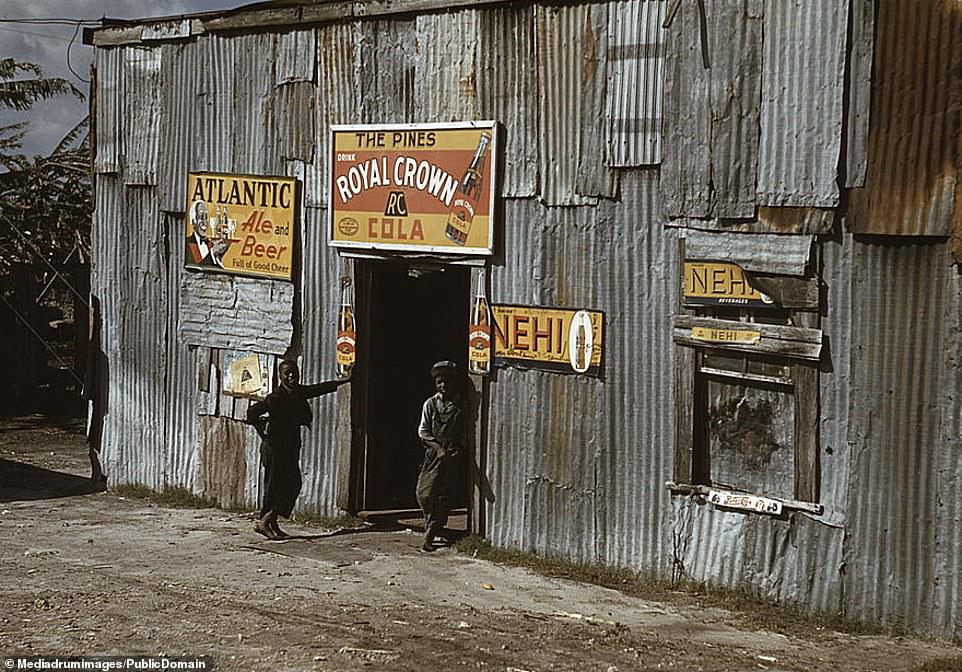 Two men look to the camera while standing outside a Juke Joint’ – or a hastily constructed bar, which served as meeting place for the entire community. They were typically racially segregated 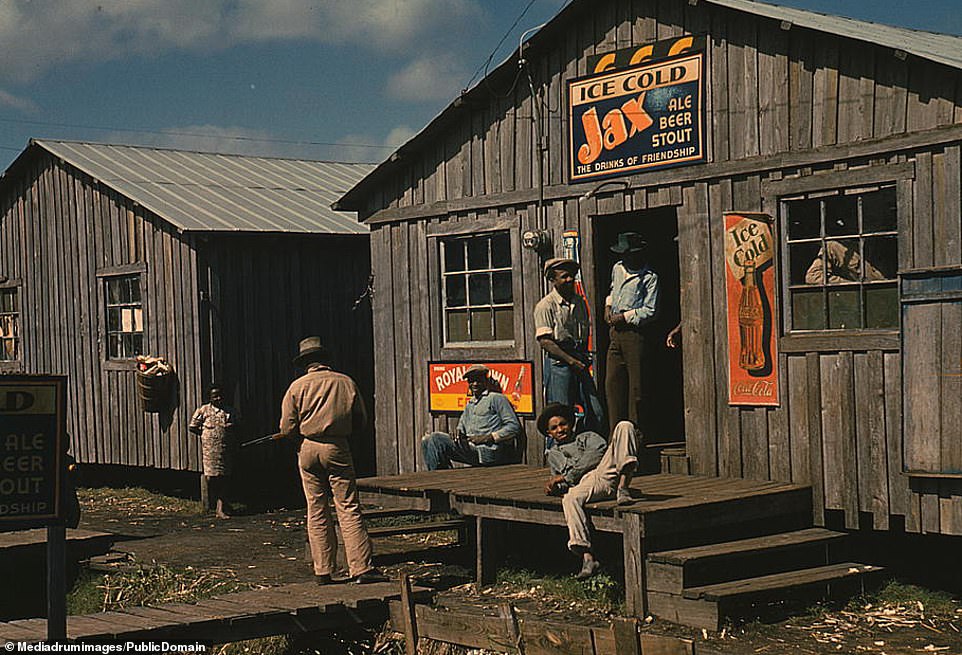 Workers hoping a job offer will come in hang around the local Juke Joint. Many African Americans who worked on farms in the 1930s – a hangover from the days of slavery, even though the practice was abolished many decades earlier – found themselves unemployed with little or no work available 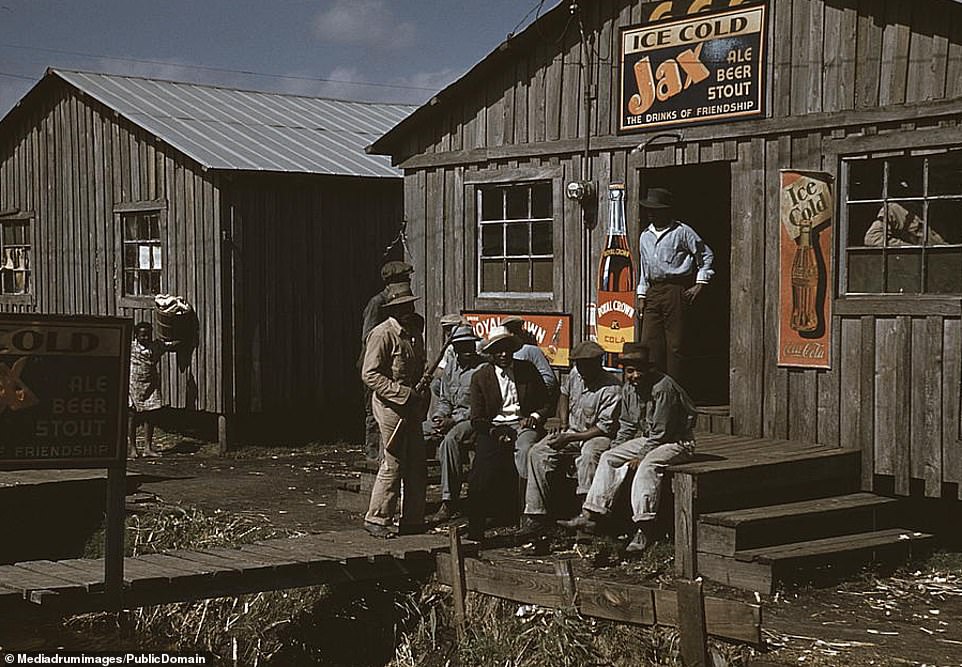 A man with a gun stands outside the Juke Joint with other hard working men who were waiting for job opportunities to come up. Migratory workers would often be paid by the day, a situation which offered no job security and long barren spells between harvesting seasons 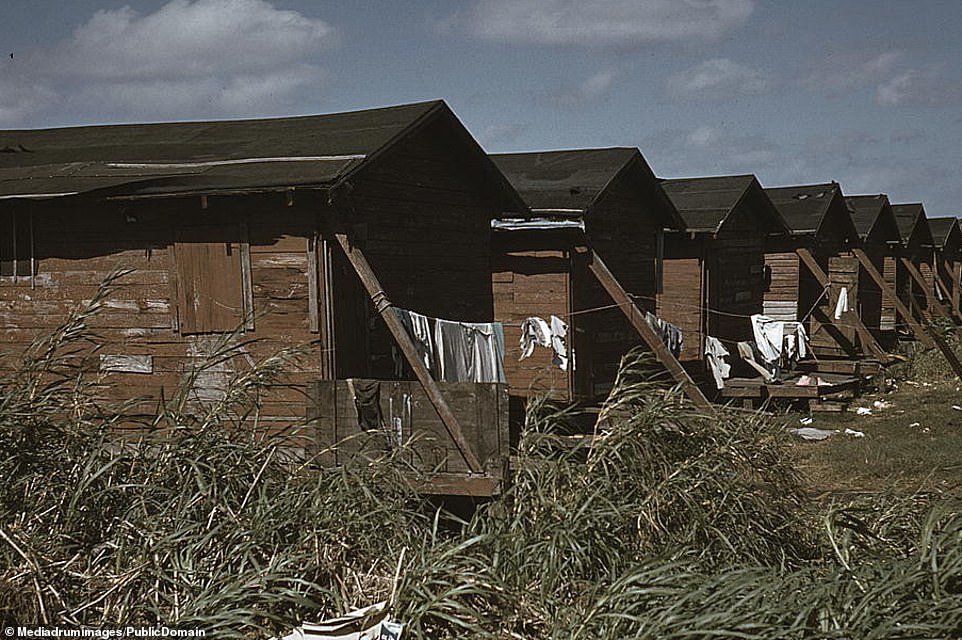 With lodging houses overflowing during the Great Depression, improvised shantytowns like the one pictured sprang up across the whole country. On vacant lots, public land and in empty alleys, unemployed people cobbled together huts and shacks from wood and scrap metal 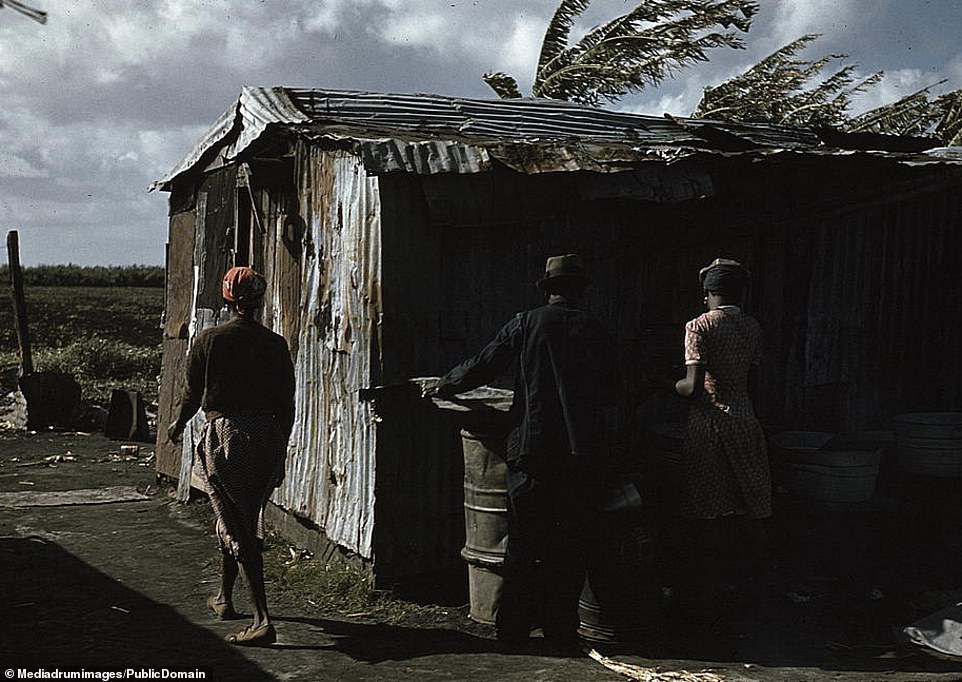 The shacks shacks are buffeted by strong winds but seem to hold up. A hurricane would be deadly – life was hard for this community even after the Great Depression had ‘passed’ 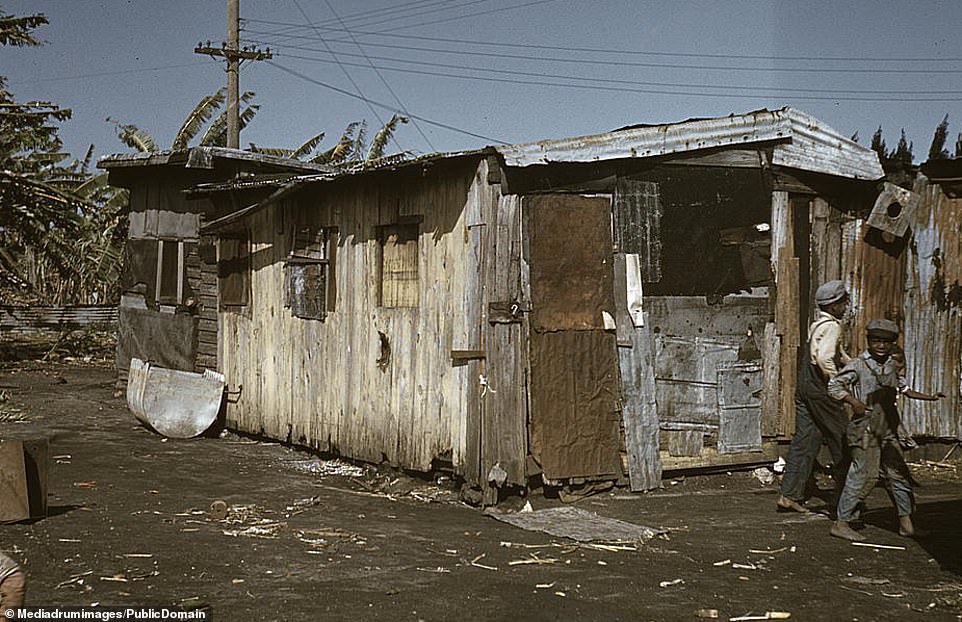 Often called ‘Hoovervilles’, after the president in office during the onset of the Depression, these shantytowns and shacks could be found almost everywhere across the States, including in Central Park New York. The majority however, were in the impoverished south, especially Florida where the climate was at least a few degrees warmer 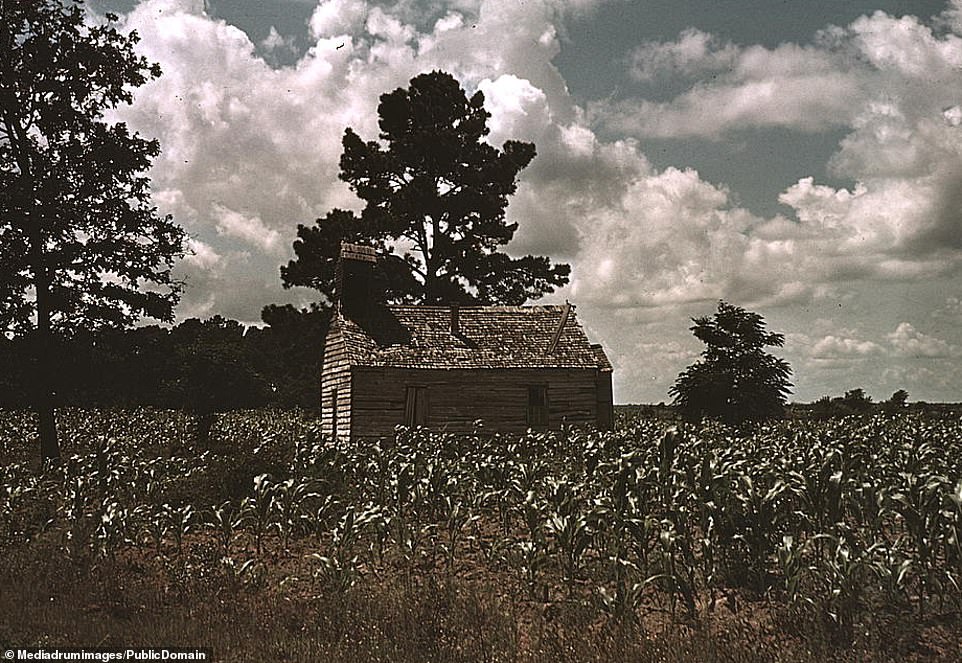 An African American Church is pictured in a corn field in Southern Carolina. Although colour film had been available commercially since 1935, it was still not widely used as it was expensive and colour images were considered ‘vulgar’ by certain photography students 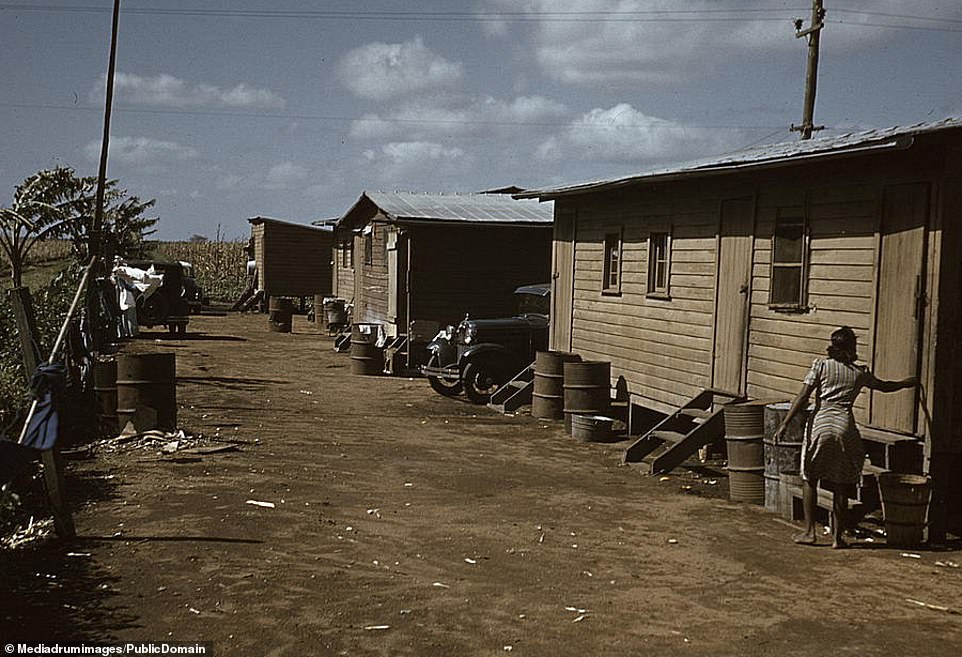 A shanty town in 1941, just before the United States entered World War Two. During the Great Depression, homelessness rocketed, and many black citizens had no choice but to build their own ramshackle, cramped living quarters where whole families would often share just one room 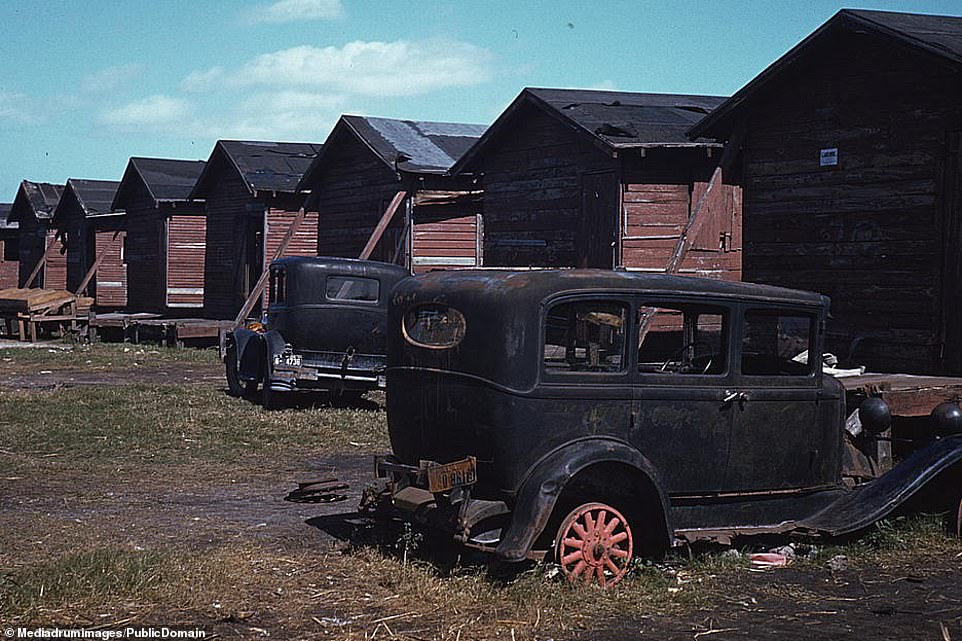 Stripped vehicles are pictured outside the threadbare housing in Florida. Following years of radical growth and extraordinary spending in the ‘roaring twenties’ the stock market crash of 1929 had seen millions of investors wiped out in a single day with crippling results, plunging millions of people into poverty 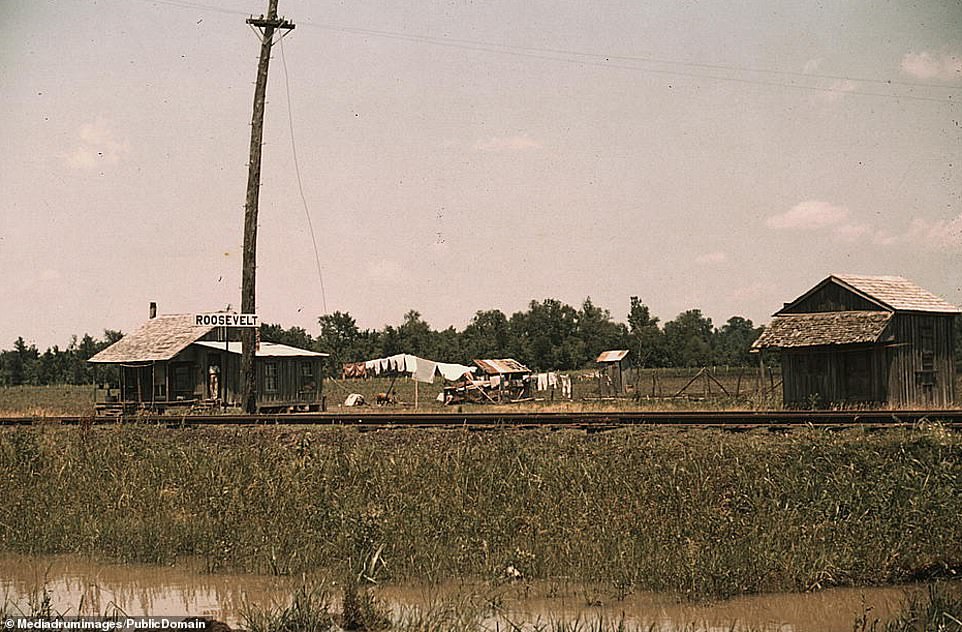 A rickety house beside a railway track. A Roosevelt sign suggests that this was an election year, probably 1940 when he swept to victory for an unprecedented third time (he had four terms in total). His New Deal helped ease the US out of the Great Depression but the most vulnerable communities still struggled daily 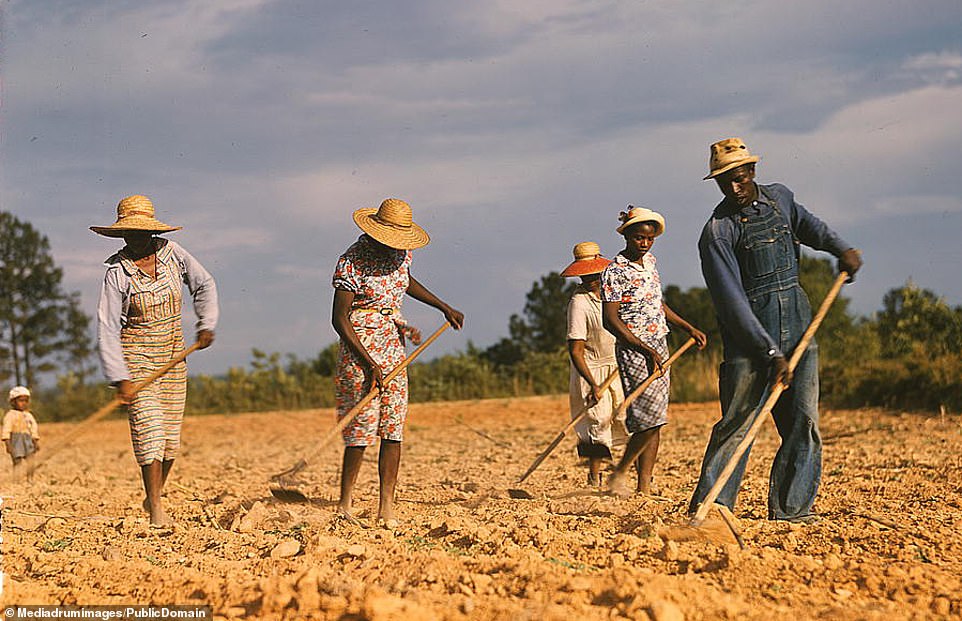 Five farm laborers – four women and a man – are pictured at work in the hot sun in Georgia in 1941 while a young toddler watches on. For more than ten years the country was in a financial crisis which saw 15 million Americans out of work 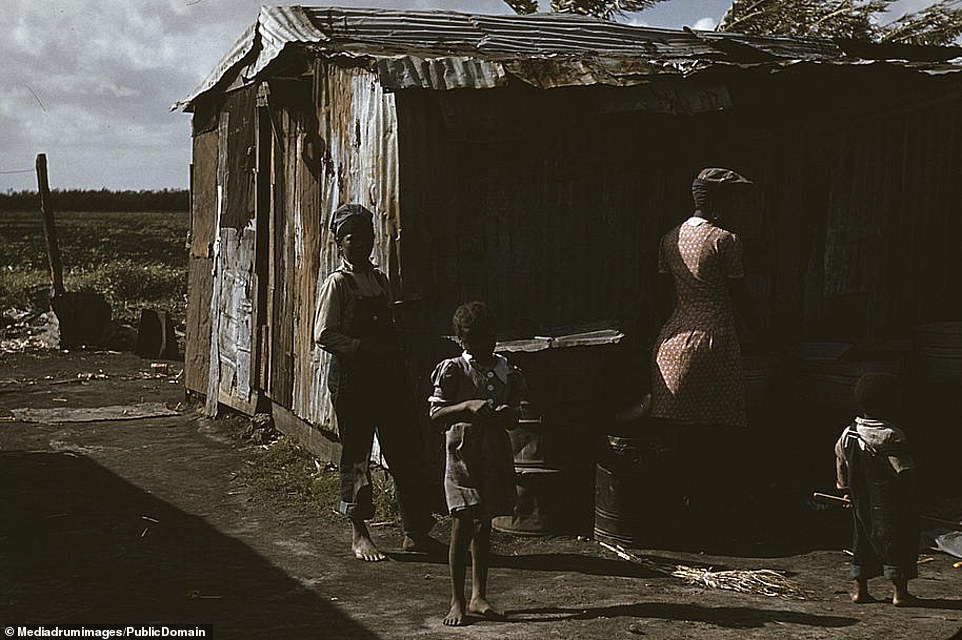 A barefoot family outside their shack in Florida. The onset of World War Two in December 1941 provided a huge economic boost to the United States which was quickly emerging as a super power on the international scene. However, the painful repercussions of the crash were still affecting those in the country’s most poverty-stricken areas, particularly in the south 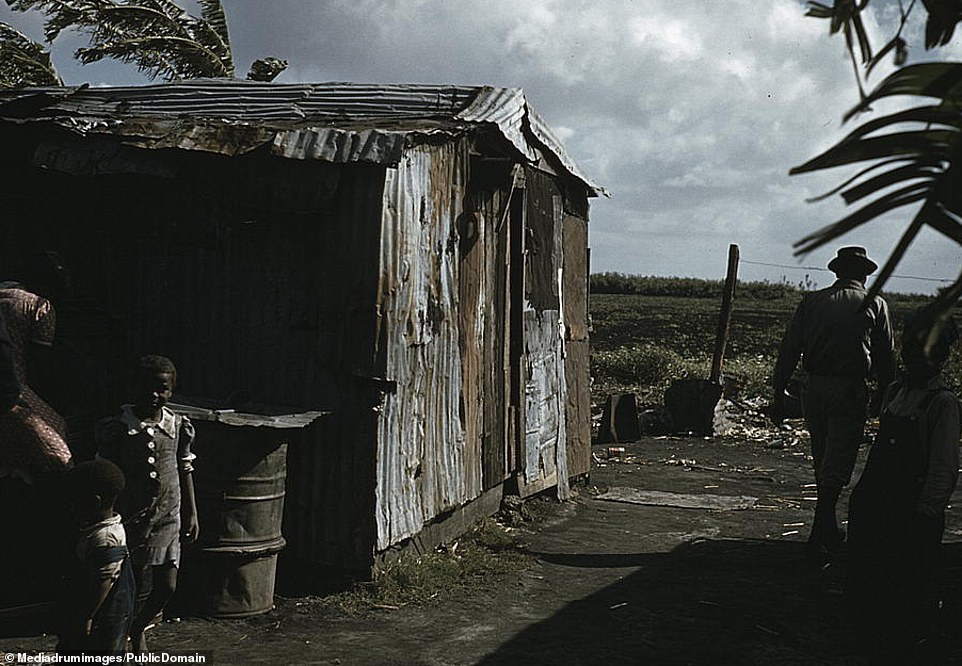 Young children stand next to their makeshift home. After 1940 America’s economy began to recover and unemployment started to fall, while shanty eradication programs slowly destroyed all the Hoovervilles that sprang up during the Great Depression 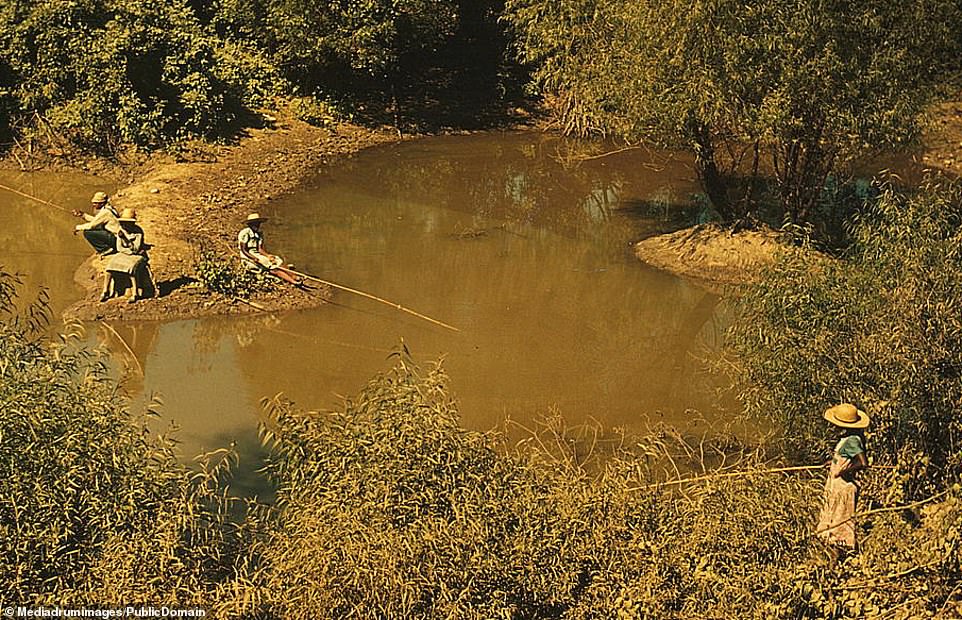 People fish near a cotton plantation in Mississippi in 1941, when most of the United States was getting back on its feet after the turmoil of the economic collapse of 1929, save for the poorest communities in the Deep South