The Allied invasion as you’ve never seen it before: Stunning colorized photographs show the Battle of the Bulge in one of the final encounters of World War II

The terrible wintry conditions soldiers were forced to fight in during the last major German offensive of World War Two have been brought to light thanks to a series of colorised images to mark the 74th anniversary of the Battle of the Bulge.

Striking pictures show three gunners prepare to fire a shell on New Year’s Eve in 1944 with the inscription ‘For Adolph, unhappy new year’, American GIs are pictured resting on railway tracks after combat in Düren and two soldiers can be seen inspecting a deserted Panther tank formerly of the Panzer Division Das Reich near Grandmenil, Belgium.

Other vivid colour photographs show a US half track cross a temporary bridge over the Ourthe River, members of the US 101st Airborne Division move out of Bastogne and Panzergrenadier-SS Kampfgruppe Hansen in action during clashes in Poteau against Task Force Myers.

GIs of the 413th Infantry Regiment, 104th Infantry Division ‘Timberwolf Division’ are pictured resting on railway tracks after combat in North Rhine-Westphalia, Germany on December 21, 1944. The photo was captured during the Battle of the Bulge 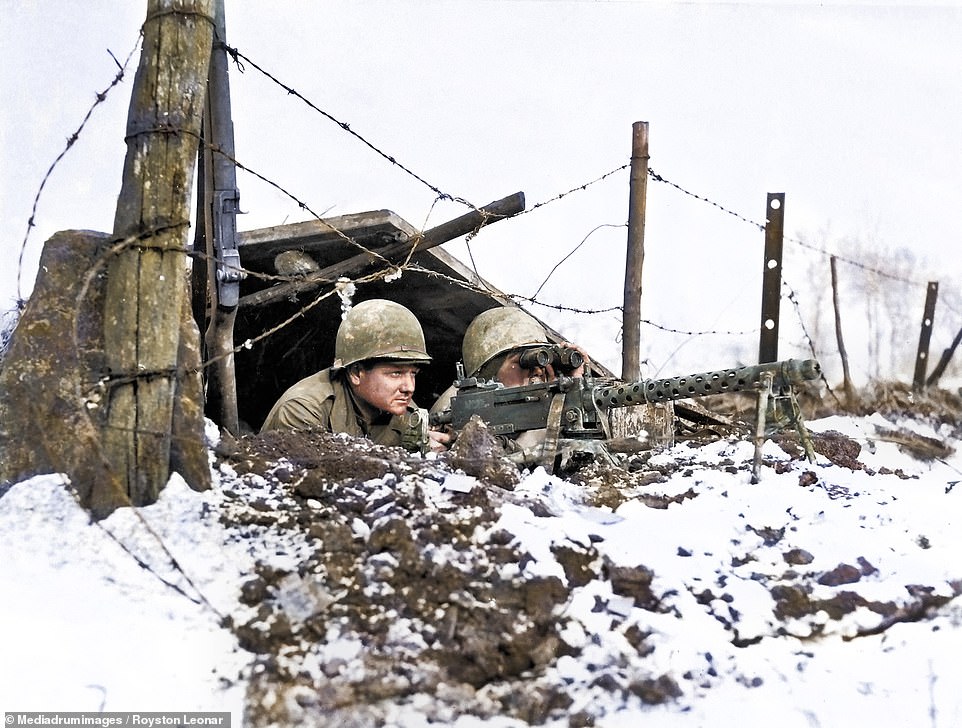 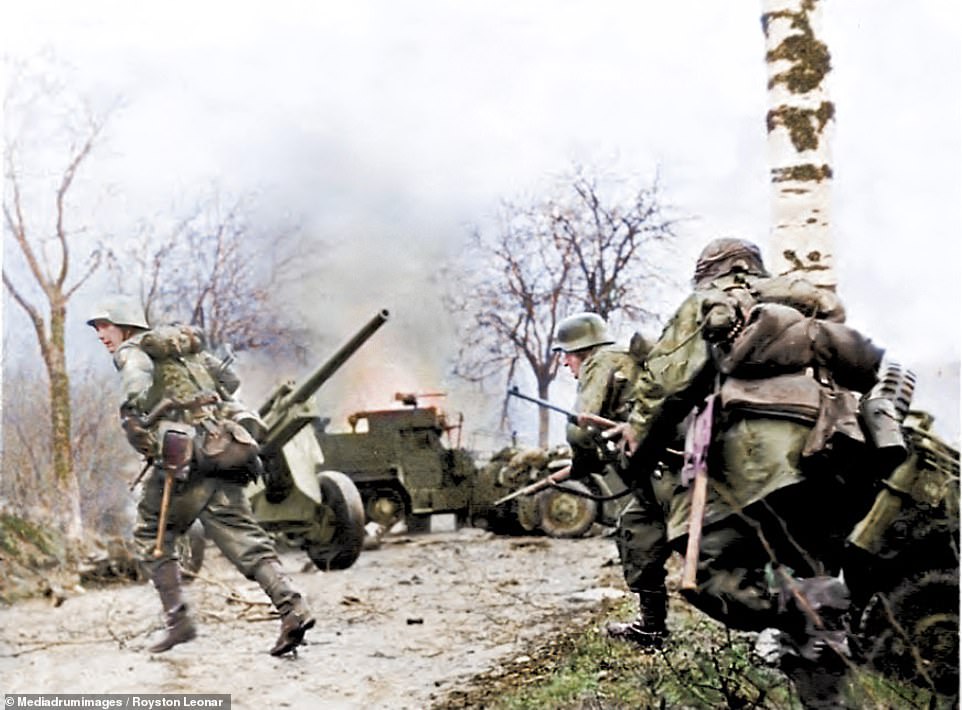 The original black and white photos were painstakingly colourised by Welsh electrician Royston Leonard ,55, from Cardiff, Wales, with each snap taking between four and five,hours to complete.

‘As time goes by I find I am doing more World War Two pictures and giving them a bit of colour helps the younger generation to connect and not just see them as something that happened long ago,’ he said.

‘In the images I see a world that has gone mad and men and women pulled from their lives to sort out the mess.

‘World War Two shows people at their best and at their worst. We must look and learn and not let it happen again.’ 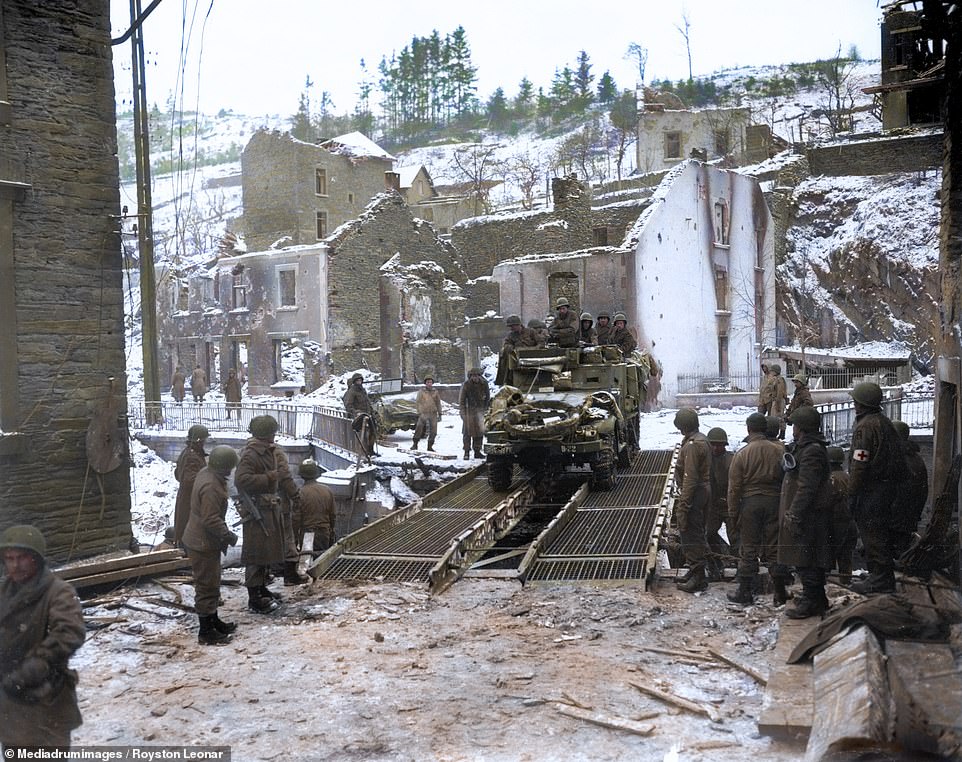 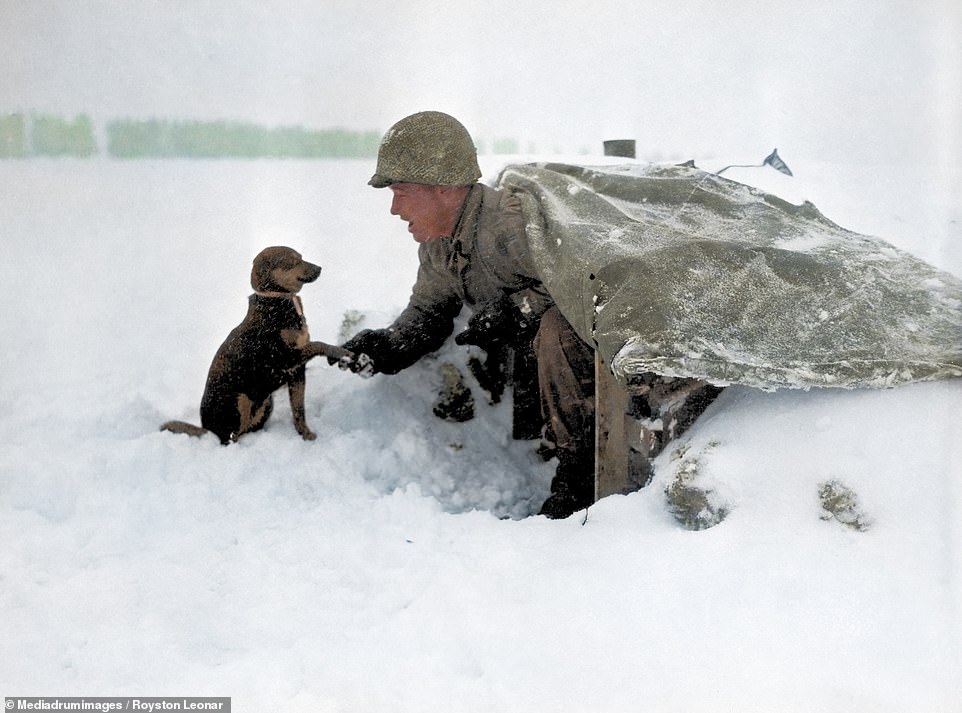 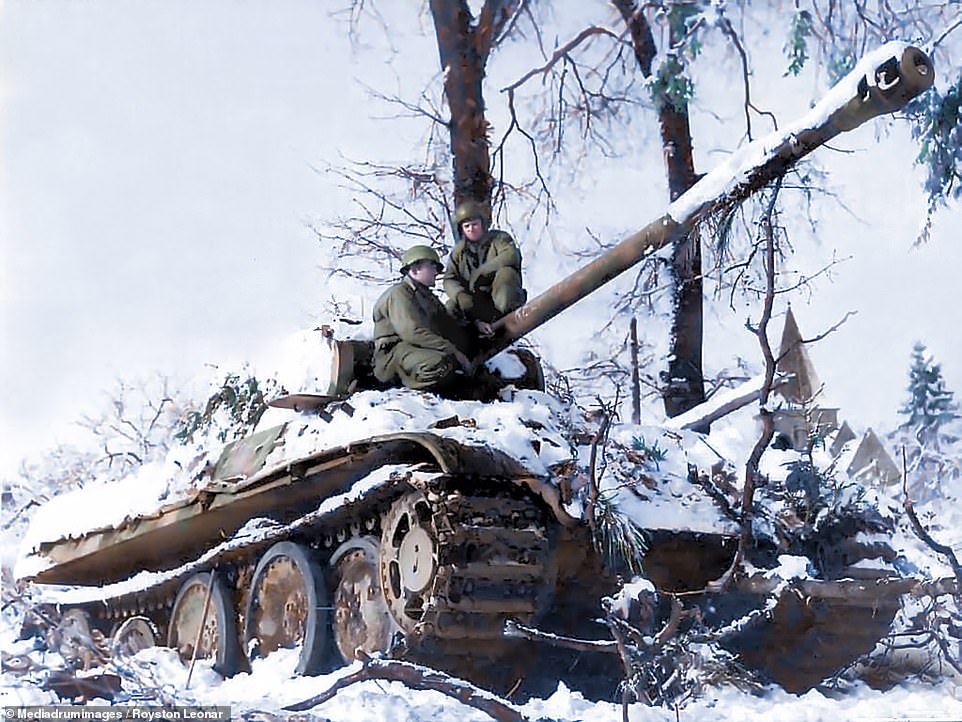 James Gordon and Private Rainwater inspect a deserted Panther tank formerly of the Panzer Division Das Reich near Grandmenil, Belgium, during the Battle of the Bulge, at the end of 1944

The Battle of the Bulge (16 December 1944 – 25 January 1945) was the last major German offensive campaign on the Western Front during World War II.

It was launched through the densely forested Ardennes region of Wallonia in eastern Belgium, northeast France, and Luxembourg, towards the end of World War II.

The furthest west the offensive reached was the village of Foy-Nôtre-Dame, south east of Dinant, being stopped by the British 21st Army Group on 24 December 1944.

The German offensive was intended to stop Allied use of the Belgian port of Antwerp and to split the Allied lines, allowing the Germans to encircle and destroy four Allied armies and force the Western Allies to negotiate a peace treaty in the Axis powers’ favour.

Once that was accomplished, the German dictator Adolf Hitler believed he could fully concentrate on the Soviets on the Eastern Front. 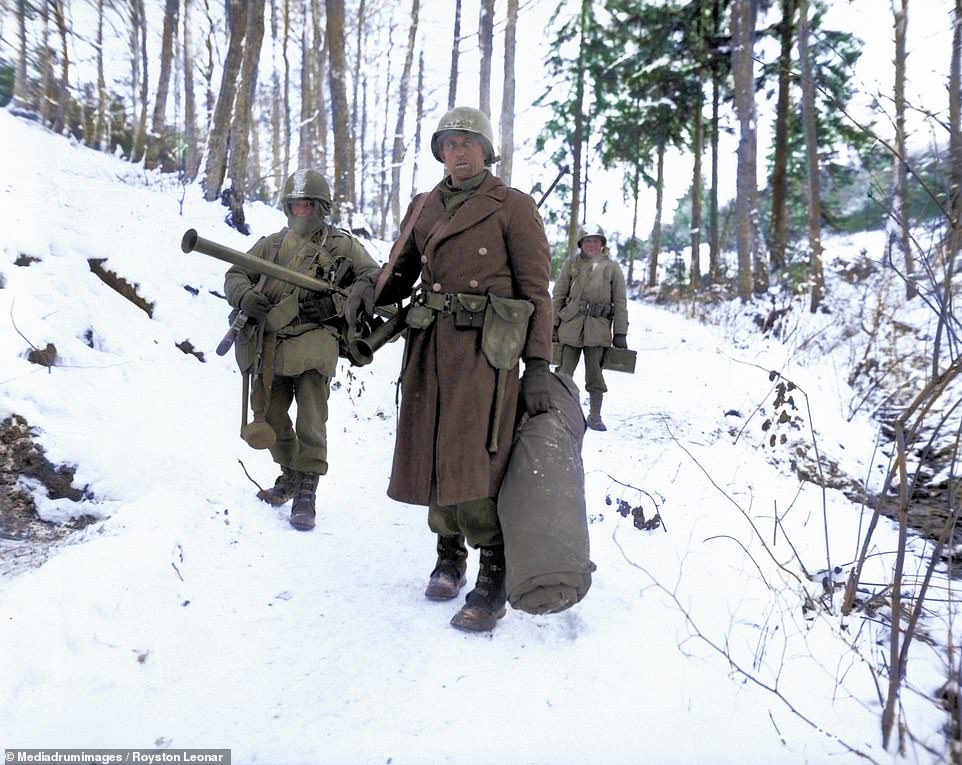 After holding a woodland position all night near Wiltz, Luxembourg, against German counter attack, three men of B Co., 101st Engineers, emerge for a rest. 14 January 1945 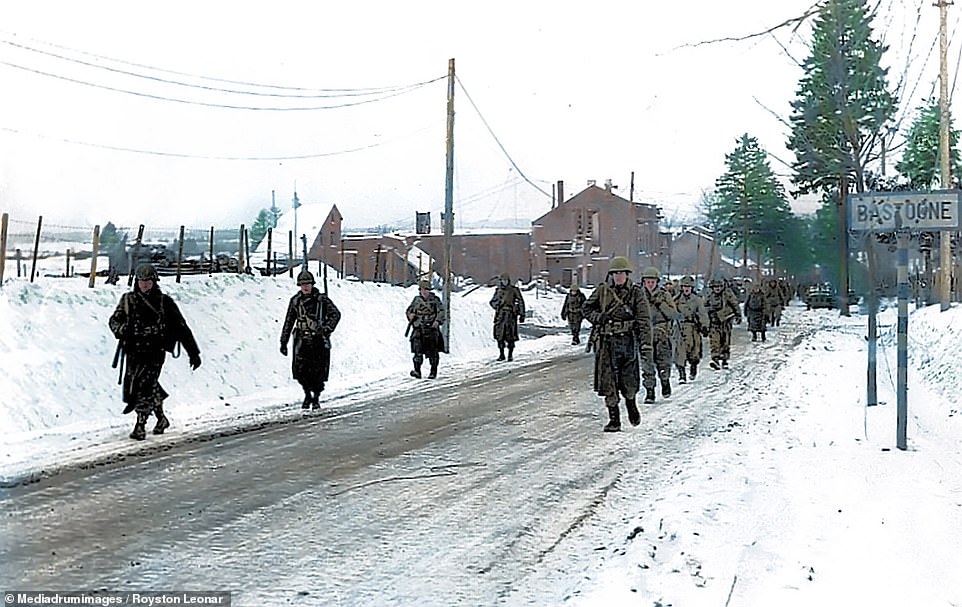 Members of the US 101st Airborne division move out of Bastogne

The Third Reich was not as politically sound as people had originally thought. Physically they were prepared for this battle.

The surprise attack caught the Allied forces completely off guard. American forces bore the brunt of the attack and incurred their highest casualties of any operation during the war.

The battle also severely depleted Germany’s armoured forces, and they were largely unable to replace them. 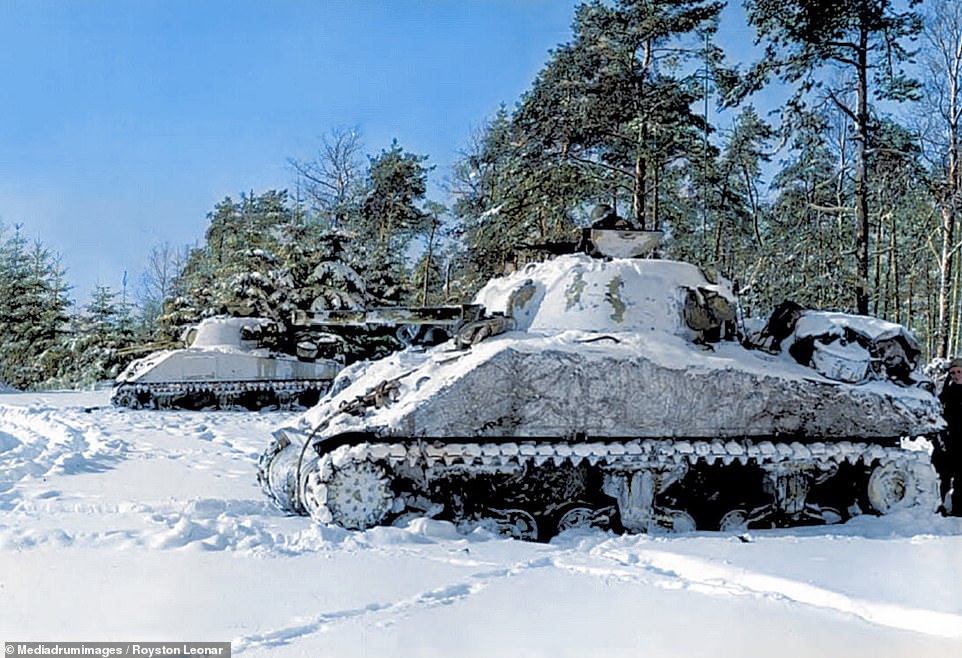 M4 Sherman tanks line up in a snow-covered field in St Vith, Belgium as the town is liberated during the Battle of the Bulge