Dramatic images from the Spanish Civil War have been rendered in colour for the first time, bringing home what it would have been like on the front lines of the bloody conflict.

The bitter war was fought between 1936 and 1939, pitting the leftist Republicans in support of the democratic government against the right-wing Nationalist rebels and their fascist allies in Italy and Nazi Germany.

At least 250,000 people were killed during the fighting, though there is still huge controversy over the exact toll due to assassinations and mass executions, and some historians have estimated it to be more than 1million. 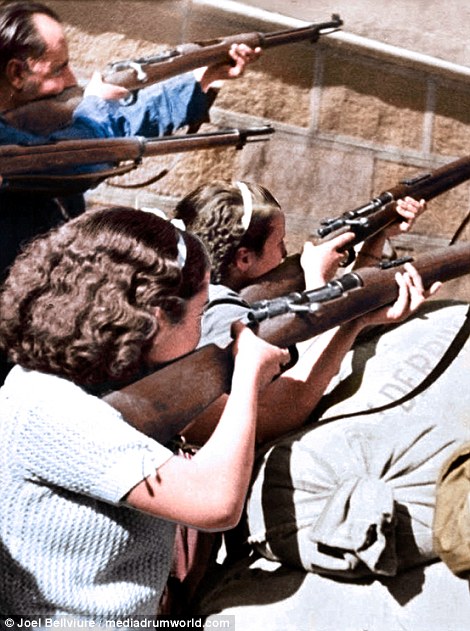 Images from the Spanish Civil War have been rendered in colour for the first time. The conflict pitted the Republicans, who supported the democratically elected left-wing government, against the right-wing Nationalists and their fascist allies in Italy and Nazi Germany. Here, a Republican volunteer is seen (left) and Republicans fire at Nationalists during the siege of the Alcázar fortress in Toledo (right) 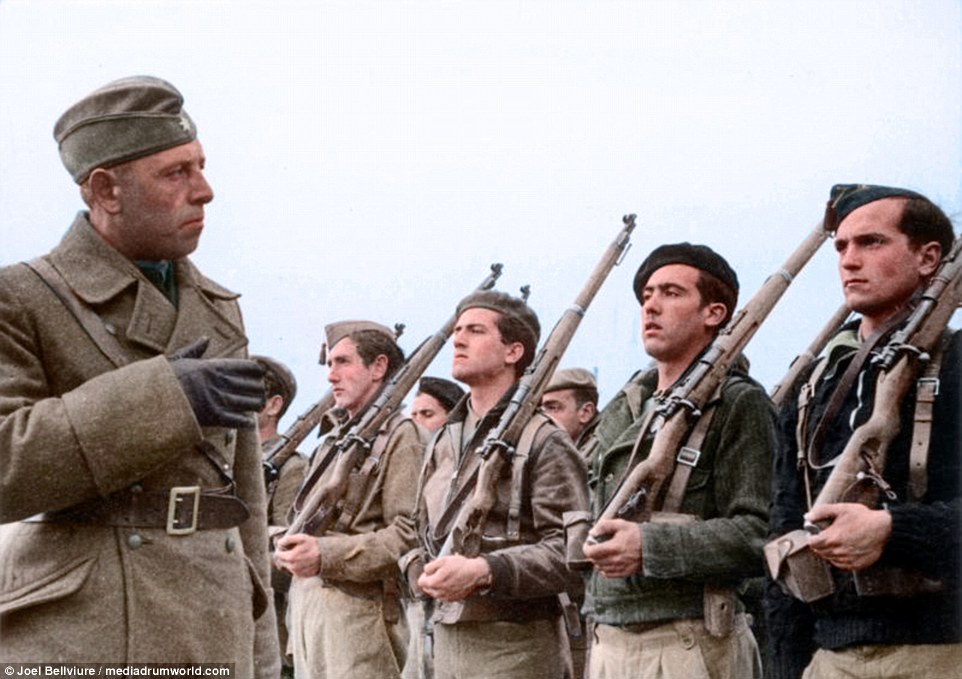 Germany was one of the first foreign powers to involve itself in the conflict as Hitler spotted a potential ally in the Nationalists and sent troops and weapons to reinforce them. Here, a German commander gives instructions to troop from the Condor Legion, which was made up of volunteers from the Luftwaffe and German Army 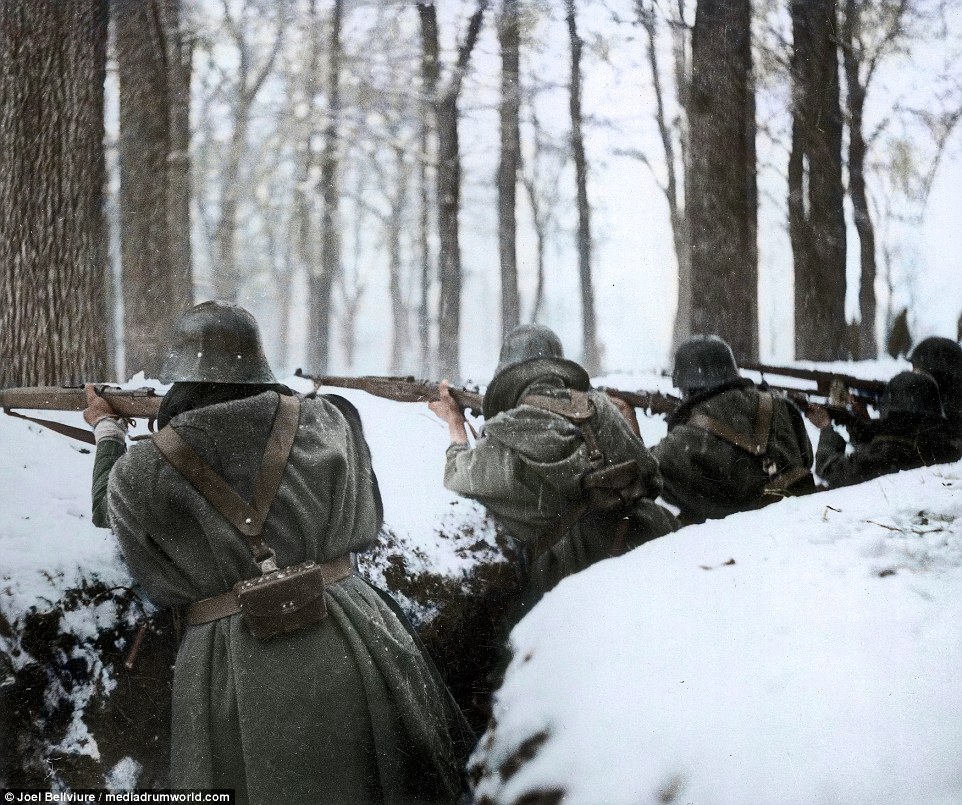 Nationalist troops aim their rifles near Navacerrada, outside Madrid, during December 1936. In October Franco had launched an offensive against the city, the seat of Republican power, forcing the government to shift to Valencia as his troops stormed in. But their offensive was eventually repulsed, leading Franco to try and cut off supply routes into the capital in what became known as the Second Battle of the Corunna Road (pictured) 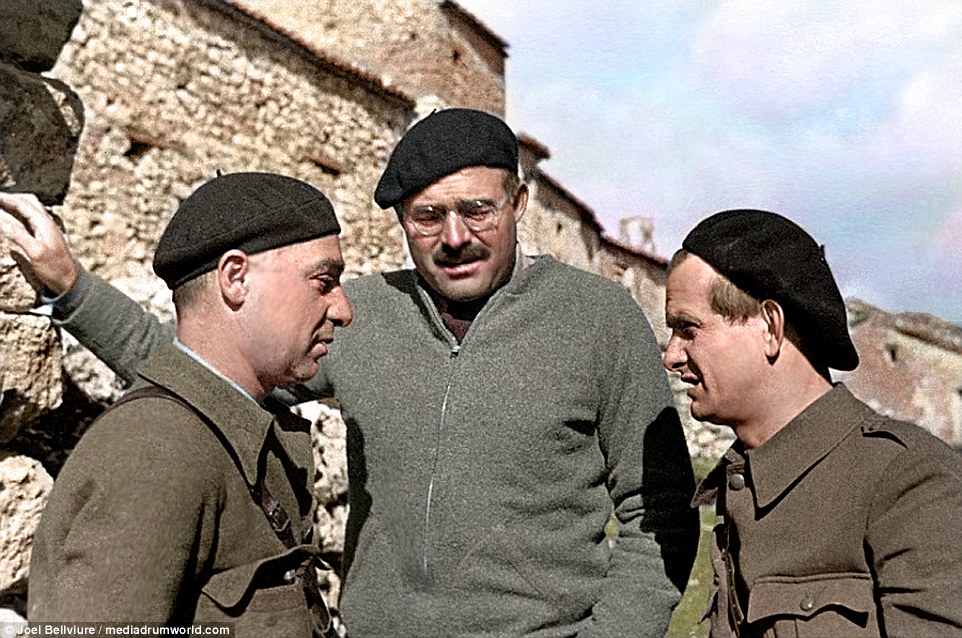 Thousands of volunteer fighters from America joined the conflict and were followed by journalists looking to cover the fighting. Among them was Ernest Hemingway, pictured here speaking with German intellectuals Ilya Ehrenburg and Gustav Regler. Hemingway had traveled to the country with filmmaker Joris Ivens, who supported the Republican cause 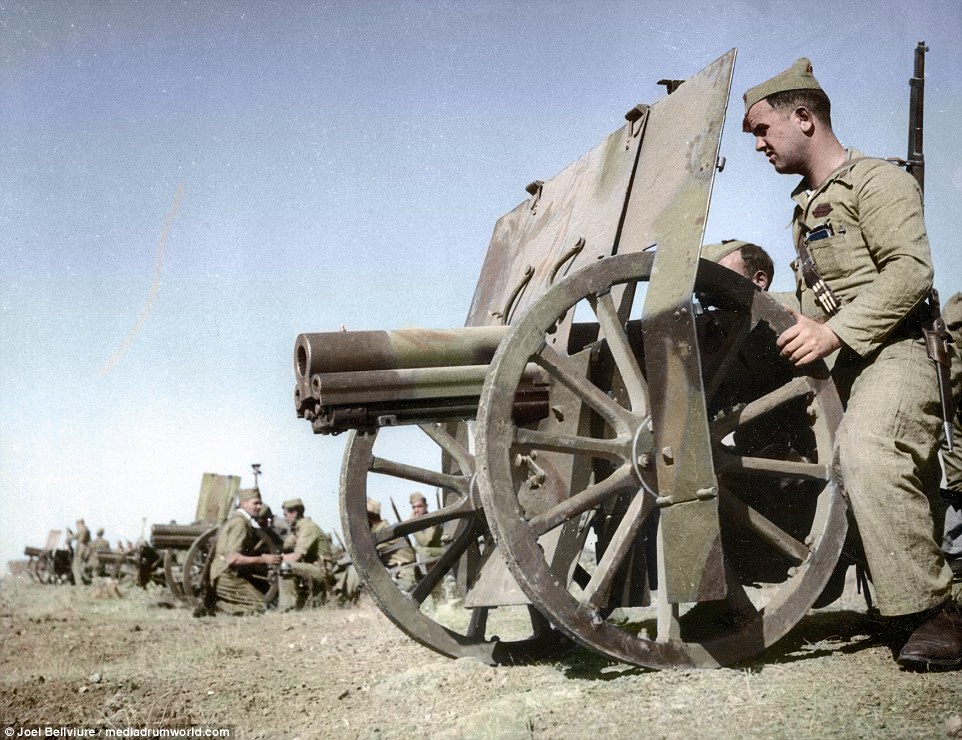 Francoist artillery positions to the west of Madrid in November, 1939. These guns participated in Franco’s first assault on Madrid, with troops initially making their way into the city before being pushed back. That began a three-year siege of the capital that ended with its capture and brought the conflict to a close

The conflict also drew in fighters from across the world and journalists keen to cover the conflict first-hand, including the likes of Ernest Hemingway.

The famous writer is captured in these images speaking with German intellectuals Ilya Ehrenburg and Gustav Regler. The picture has been rendered in colour by Joel Bellviure, 17, who lives between Mallorca and Barcelona.

‘Usually, I colourise pictures which might have an impact on the observer,’ he said.

‘A colourised war casualty can raise awareness that, although being nearly 100 years old, the essence of war will never evolve, that death doesn’t need to be romanticised because it is on black and white.’

Ultimately it was the Nationalists, led by General Francisco Franco, who claimed victory in the conflict.

Franco ruled Spain as a dictator from 1939 until his death in 1975, abolishing all other political parties and making himself the Head of State and Government under the title El Caudillo – a typically insulting term meaning ‘dictator’ or ‘strongman’ that he proudly claimed as his own. 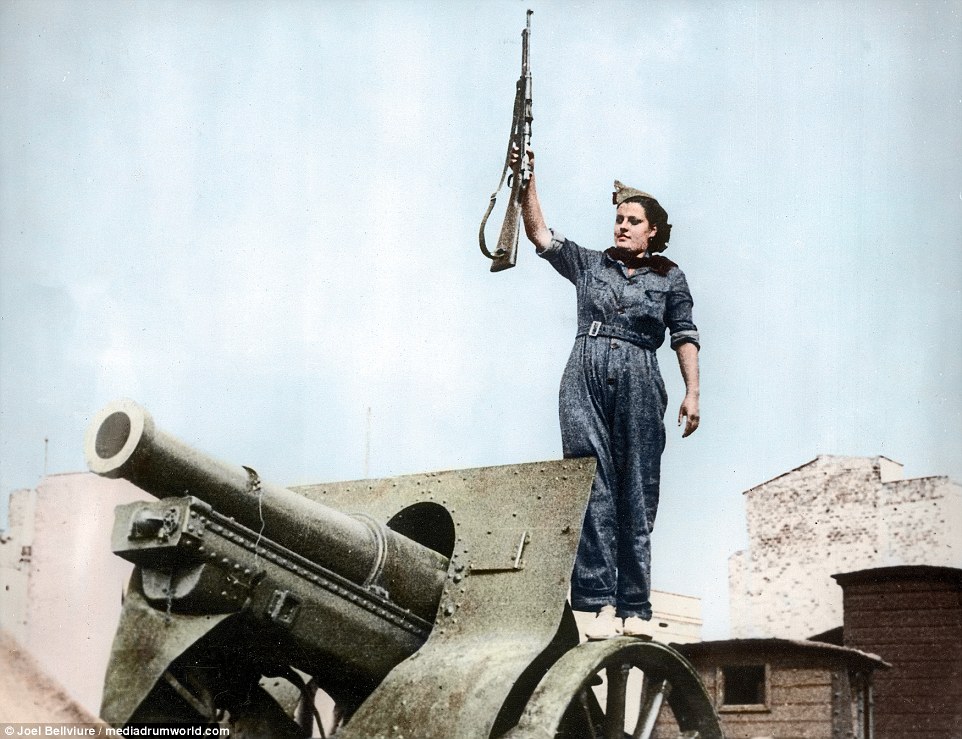 Spanish militia volunteer standing on a howitzer cannon in Barcelona in mid-August 1936. At this point the city was deep inside Republican territory, though it was later captured by Franco in a lighting offensive in the early weeks of 1939 that forced the governments of Britain and France to recognise Franco’s Nationalists as the legitimate government 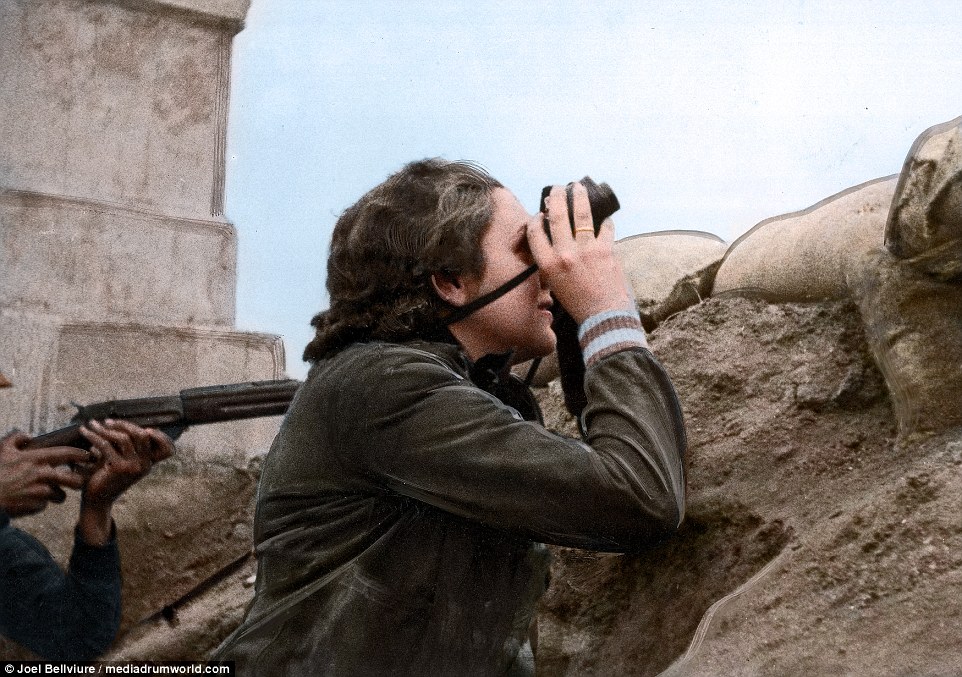 Commander of the Republican women’s squad on the Western Front of Madrid, January 1937. At this point the city had been under bombardment for months with key supply routes cut off. Sensing weakness Franco launched a second assault on the city, but was again turned back by entrenched Republican troops 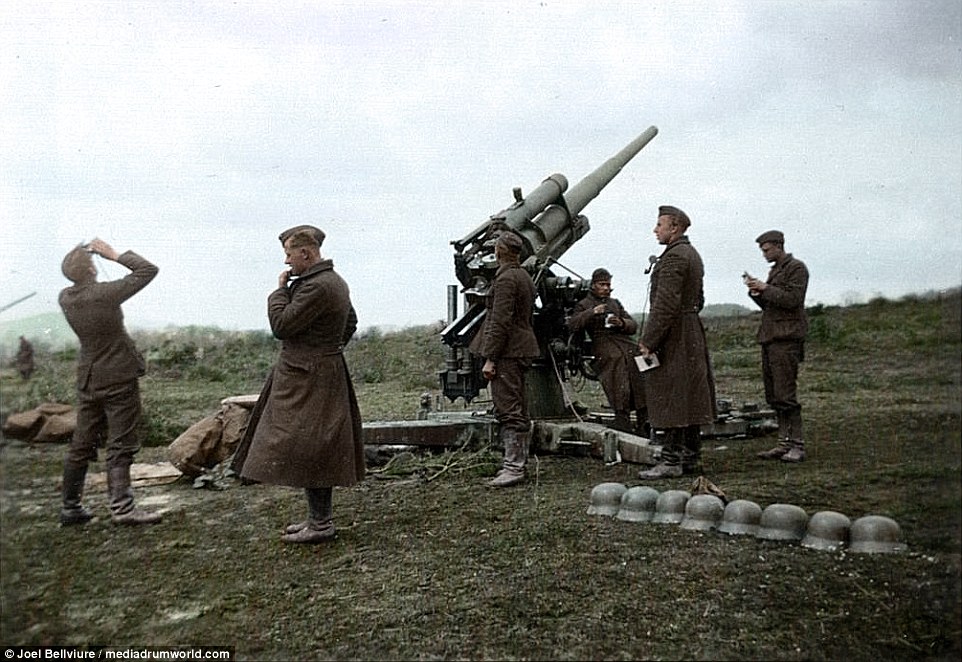 Francoist artillery battery, most likely Condor Legion soldiers, firing against Republican resistance, probably near Amposta during the last steps of the Battle of the Ebro, Autumn 1938. The battle was launched by Republicans attempting to reconnect their strongholds in Catalonia, to the north, and in Valencia, to the south. It ultimately ended in their defeat, and spelled the beginning of the end for their cause 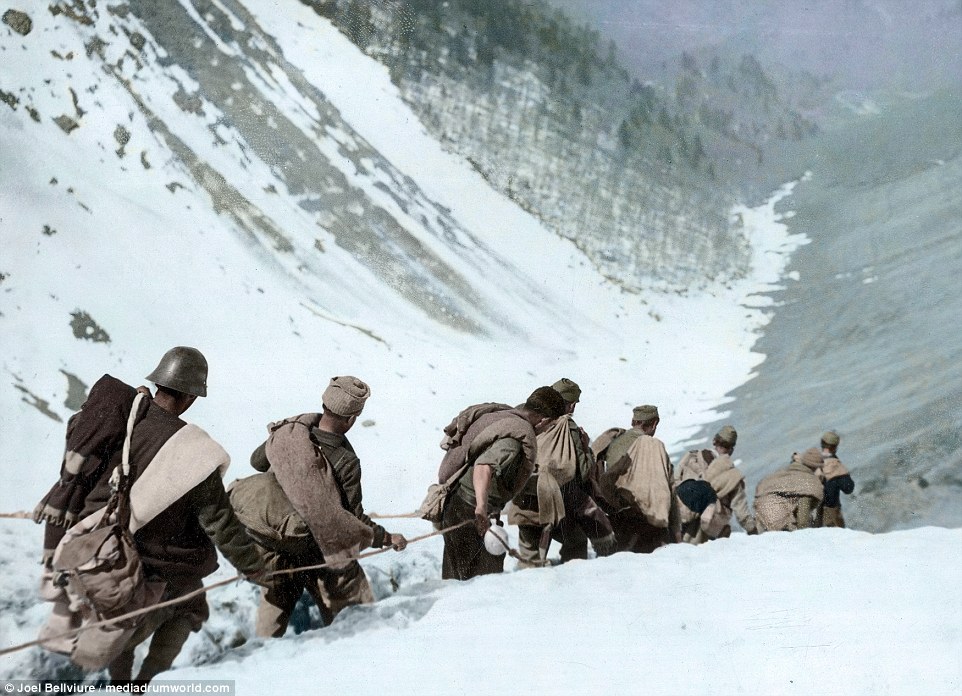 Republican soldiers crossing the Spanish-French border in the Pyrenees, March 1938, to escape the fighting. At the start of this month the Nationalists began the Aragon Offensive which smashed Republican troops, saw the province of Aragon fall under their control along with parts of Catalonia and the Levante 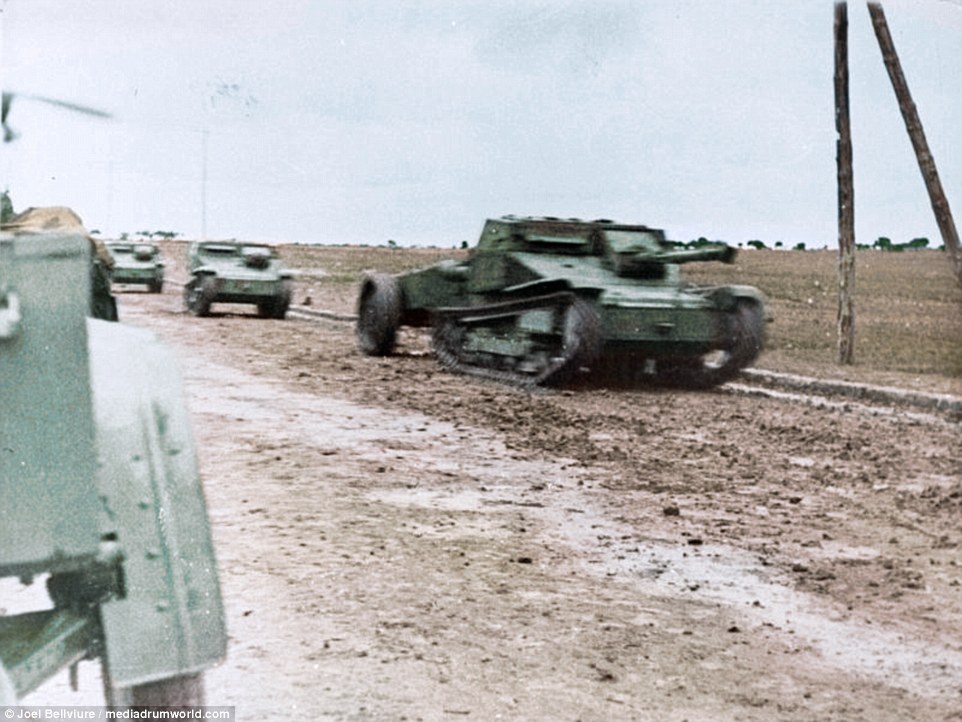 Italian tankettes advancing with an Italian L3 Lf flame thrower tank in the lead at the Battle of Guadalajara, Spain, 1937. The battle, which marked yet another attempt by Franco’s forces to surround Madrid, was the only registered defeat of Nationalists during the war

During his rule up to 400,000 dissenters and political opponents are thought to have died through the use of forced labour camps, concentration camps, and executions.

Hemingway’s involvement in the conflict began in 1937 when he was asked to report on it for the North American Newspaper Alliance, arriving in Spain in March with Dutch filmmaker Joris Ivens.

Ivens was filming The Spanish Earth, a propaganda film in support of the Republican side. He wanted Hemingway to replace John Dos Passos as screenwriter, since Dos Passos had left the project when his friend José Robles was arrested and later executed.

The incident changed Dos Passos’ initially positive opinion of the leftist republicans, creating a rift between him and Hemingway, who later spread a rumour that Dos Passos left Spain out of cowardice.

These images are featured in British author Michael D. Carroll’s new book, Retrographic on the colourisation of historical images. It is available on Amazon now for £16.85