The actions of brave Allied soldiers who fought their way on to the beaches of Normandy on D-Day have been illustrated as never before in a series of colourised photographs.

Haunting images show troops inside a landing craft approaching Omaha Beach and gunners wading ashore as reinforcements along the north coast of France on June 6, 1944.

Other shots show Lance Corporals A.Burton and L.Barnett of 6th Airborne Division guarding a road junction near Ranville shortly after D-Day and members of the 12th Parachute Battalion enjoying a cup of tea having fought their way out from behind enemy lines.

US Army troops crouch behind the bulwarks of a landing craft as it approaches Omaha Beach in Normandy in France on June 6, 1944. Thousands of brave soldiers were killed on D-Day as Allied forces battled Nazi Germany to gain a  foothold in Europe 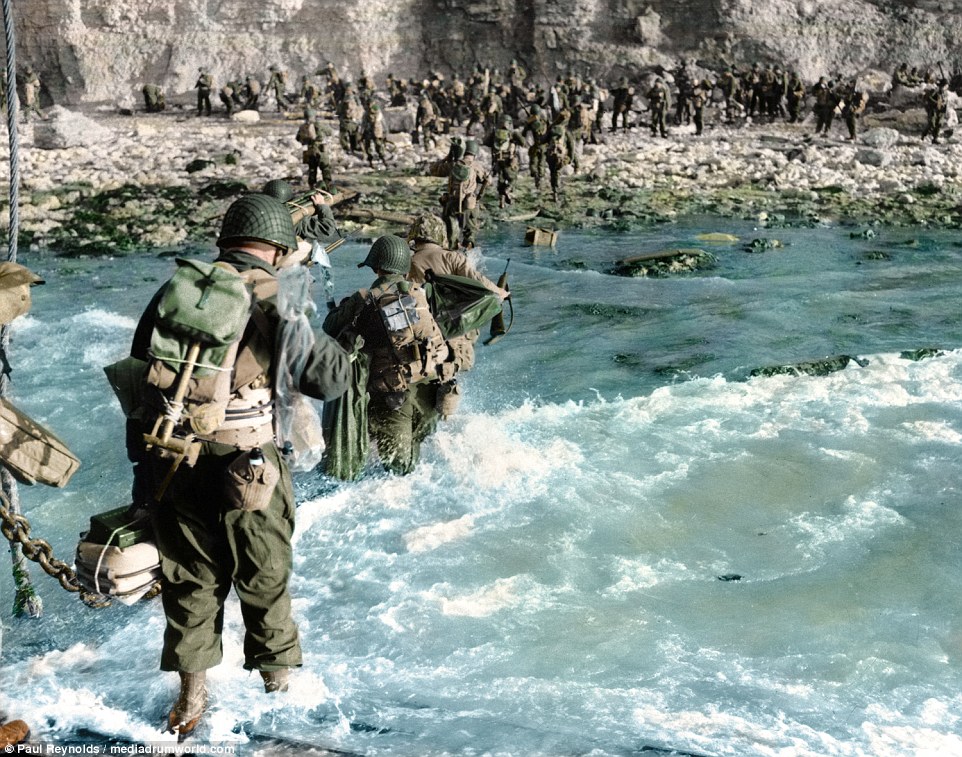 Allied gunners are pictured wading ashore at Colleville sur Mer in Normandy as reinforcements following the D-Day landings.  It is thought as many as 4,400 were killed in an operation the Second World War Prime Minister Winston Churchill described as ‘undoubtedly the most complicated and difficult that has ever taken place’ 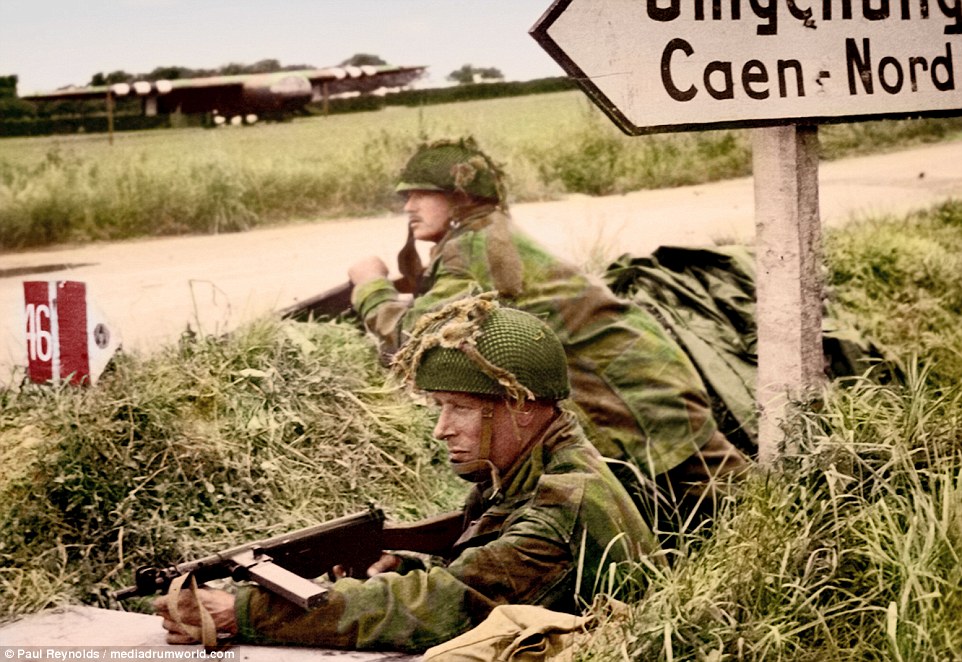 The original black and white photographs were colourised by design engineer Paul Reynolds, 48, from Birmingham.

Operation Overlord saw some 156,000 Allied troops landing in Normandy. It is thought as many as 4,400 were killed in an operation Winston Churchill described as ‘undoubtedly the most complicated and difficult that has ever taken place’. 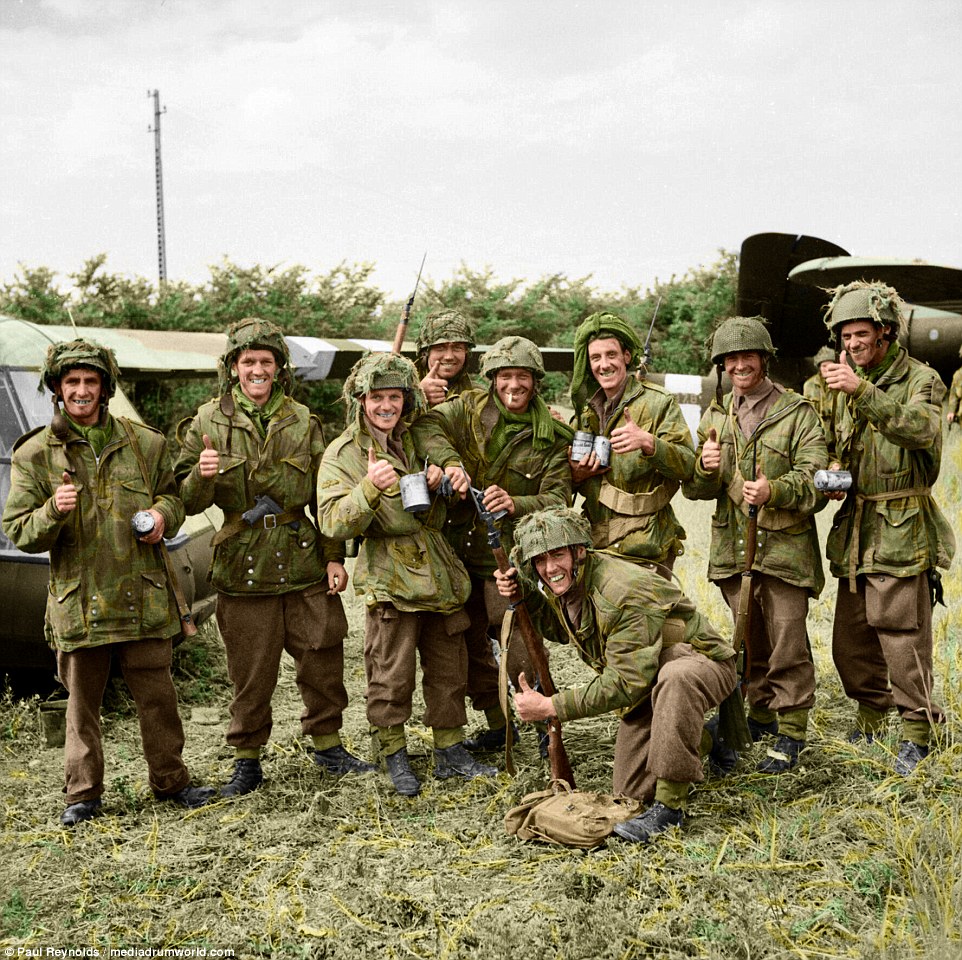 Members of 12th Parachute Battalion, 5th Parachute Brigade, 6th Airborne Division, are pictured on June 10, 1944, enjoying a cup of tea having spent three days fighting their way out from behind enemy lines 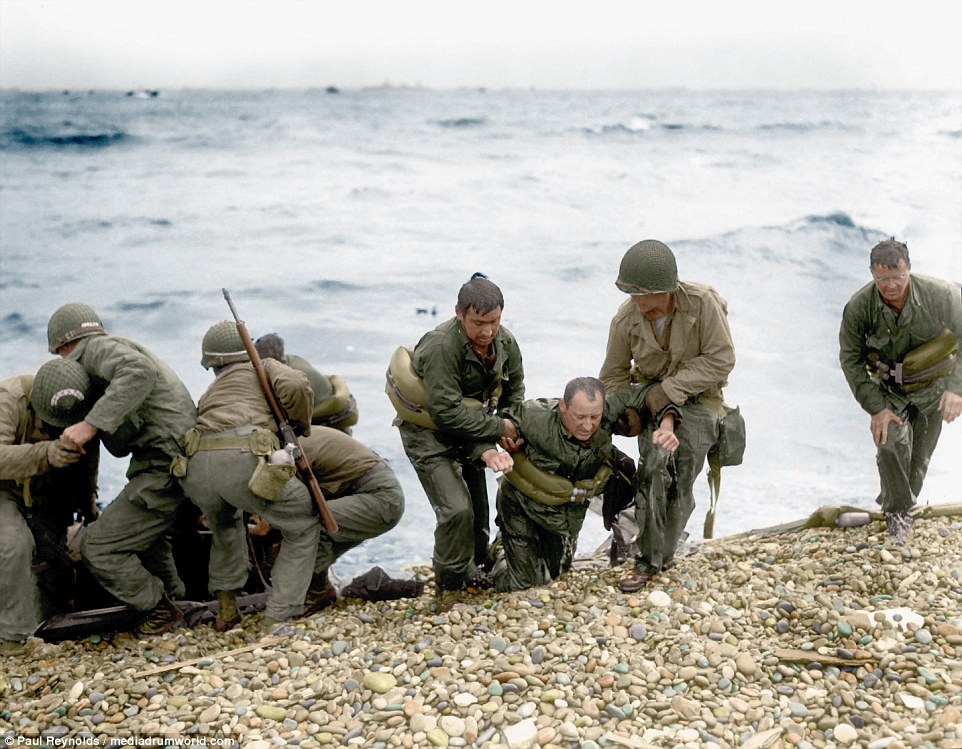 Members of an American landing party drag men to shore after their landing craft was sunk by Nazi shelling off the coast of France on D-Day. The survivors reached Utah Beach, near Cherbourg, using a lift raft. The largest seaborne invasion in history, the D-Day operation began the liberation of German-occupied northwestern Europe from Nazi control, and laid the foundations of the Allied victory on the Western Front 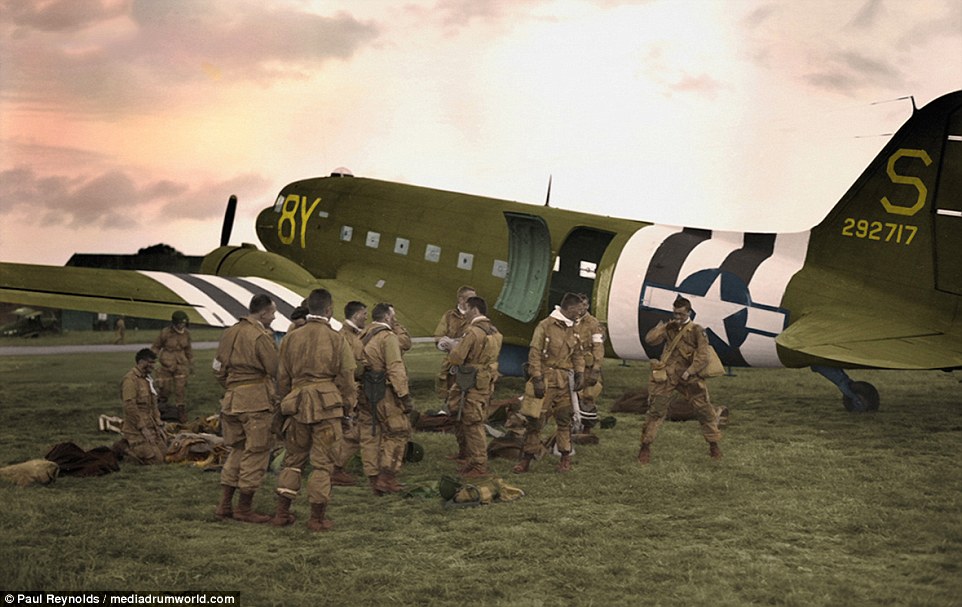 Lieutenant Colonel Robert L. Wolverton and his men check their equipment before boarding their plane in Exeter, Devon on June 5, 1944 ahead of their D-Day parachute drop behind enemy lines. Robert Wolverton was killed by German machine gun fire in an orchard outside Saint-Come-du-Mont, Normandy, France a day later 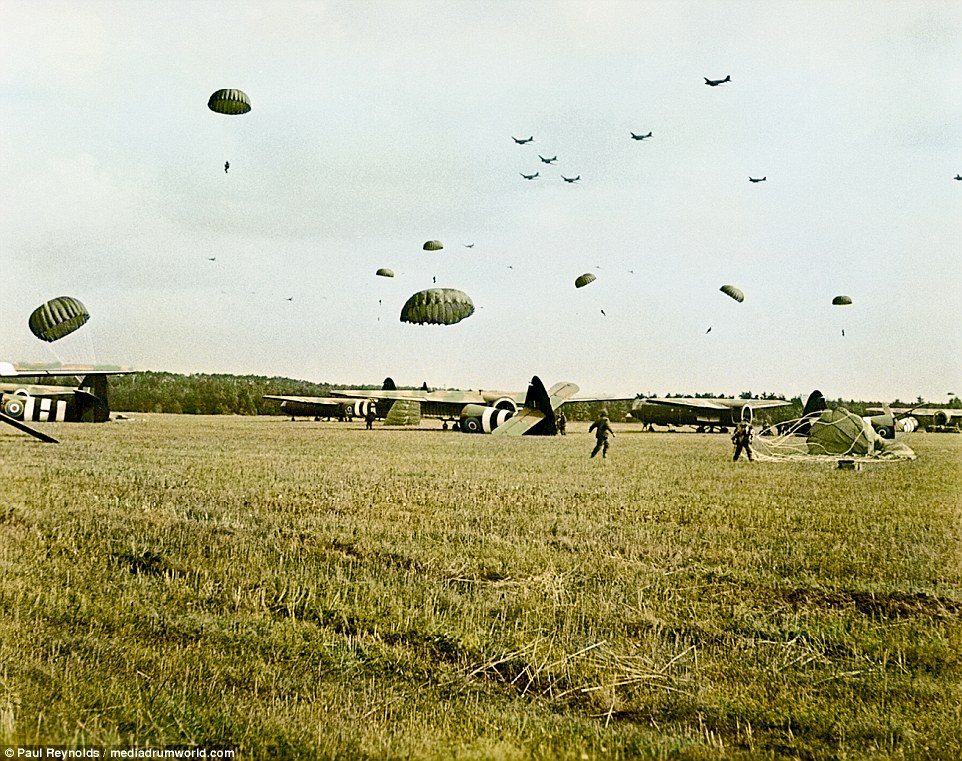 British paratroops of the 1st Airlanding Reconnaissance Squadron are pictured falling to the ground and gathering their parachutes on September 17, 1944 in Arnhem, Holland as Allied troops continued to battle for a foothold on mainland Europe 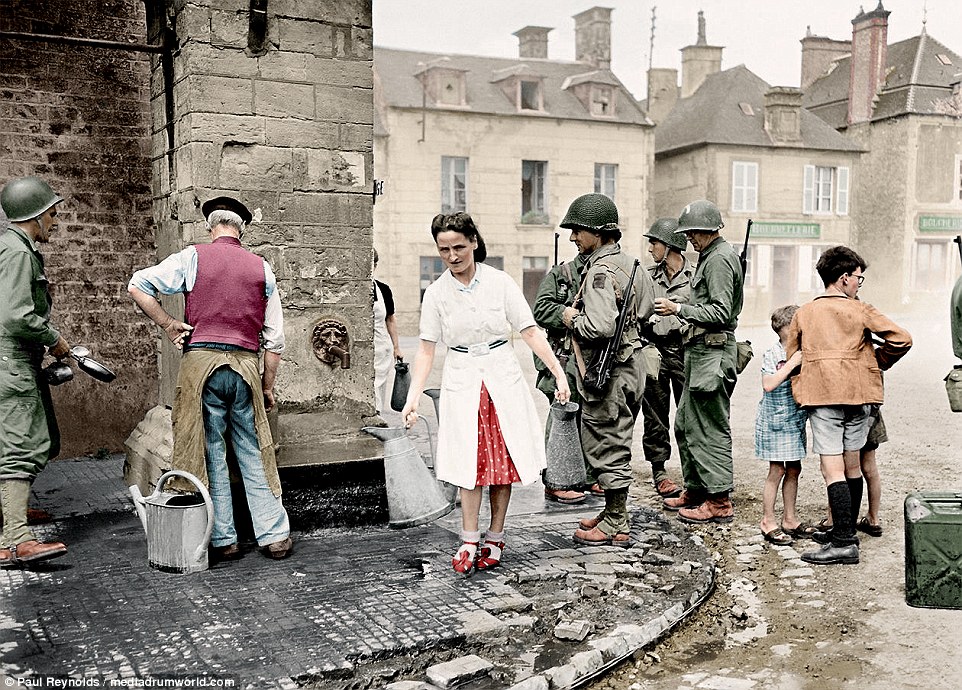 A woman carries a jug as American soldiers join adults and children in a queue for water in Sainte-Marie-du-Mont in Normandy in 1944. The village, as depicted in TV series Band of Brothers, was the first to be liberated in Normandy during the D-Day invasion 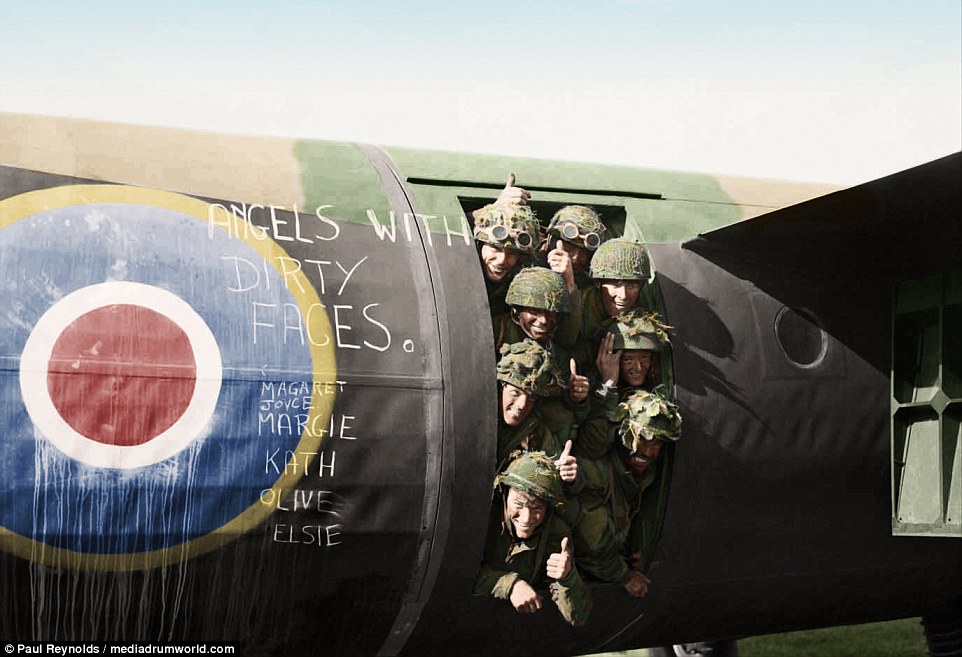 Airborne troops smile from the door of their Horsa glider as they prepare to fly out as part of the second D-Day drop on the night of June 6, 1944. Writing on the side says ‘Angels with dirty faces’ along with a list of women’s names 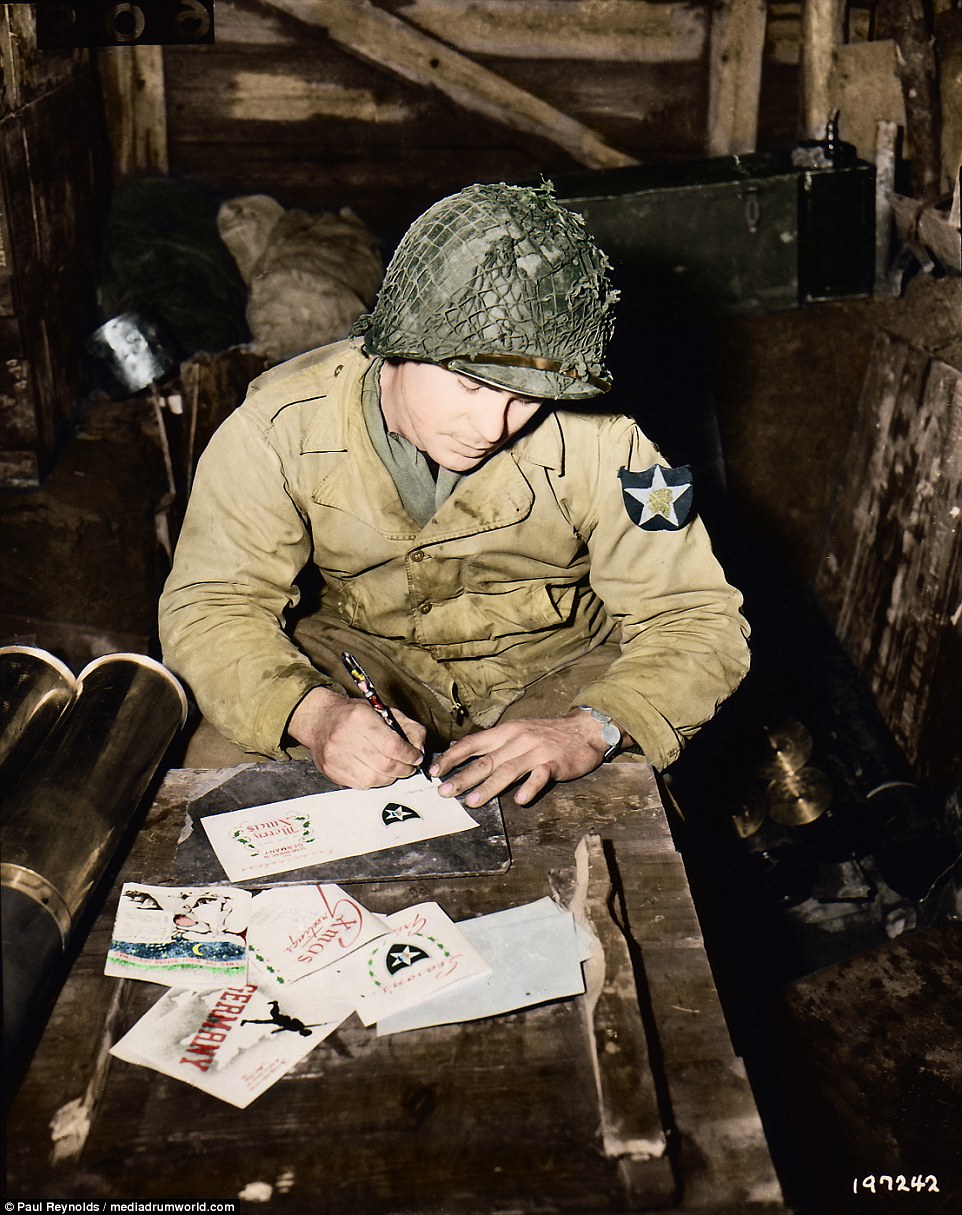 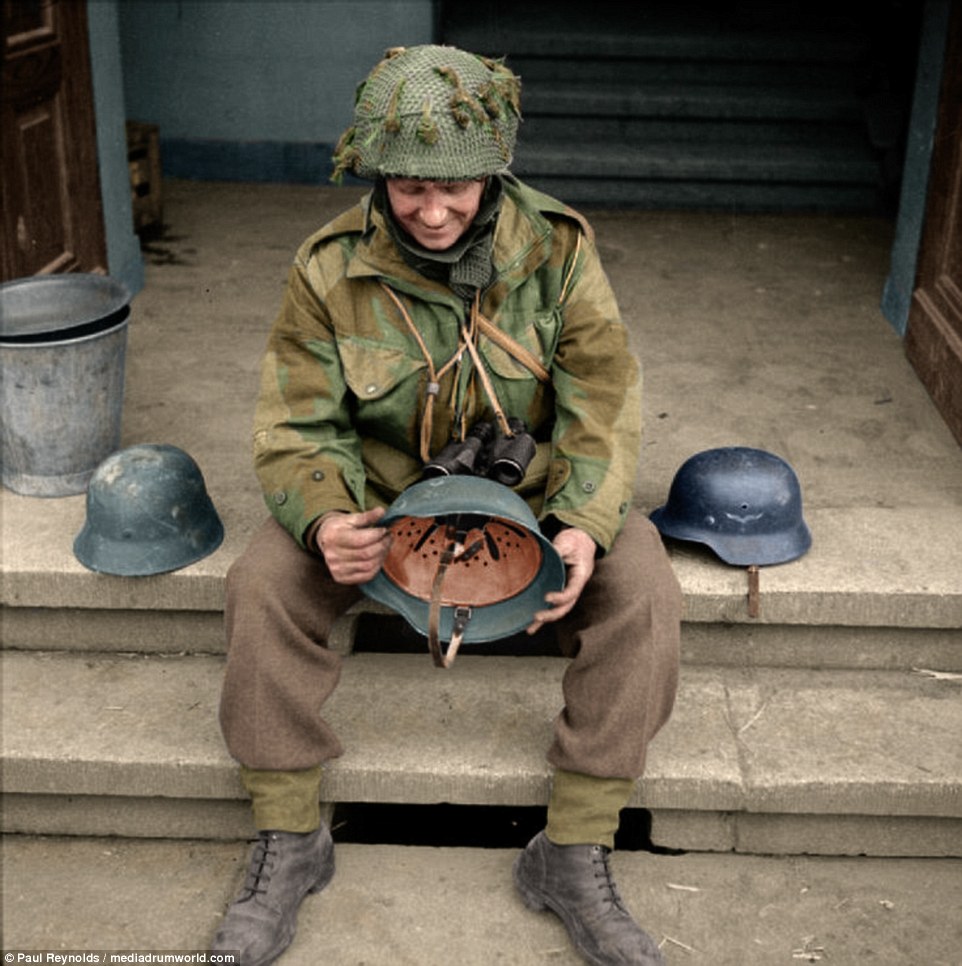 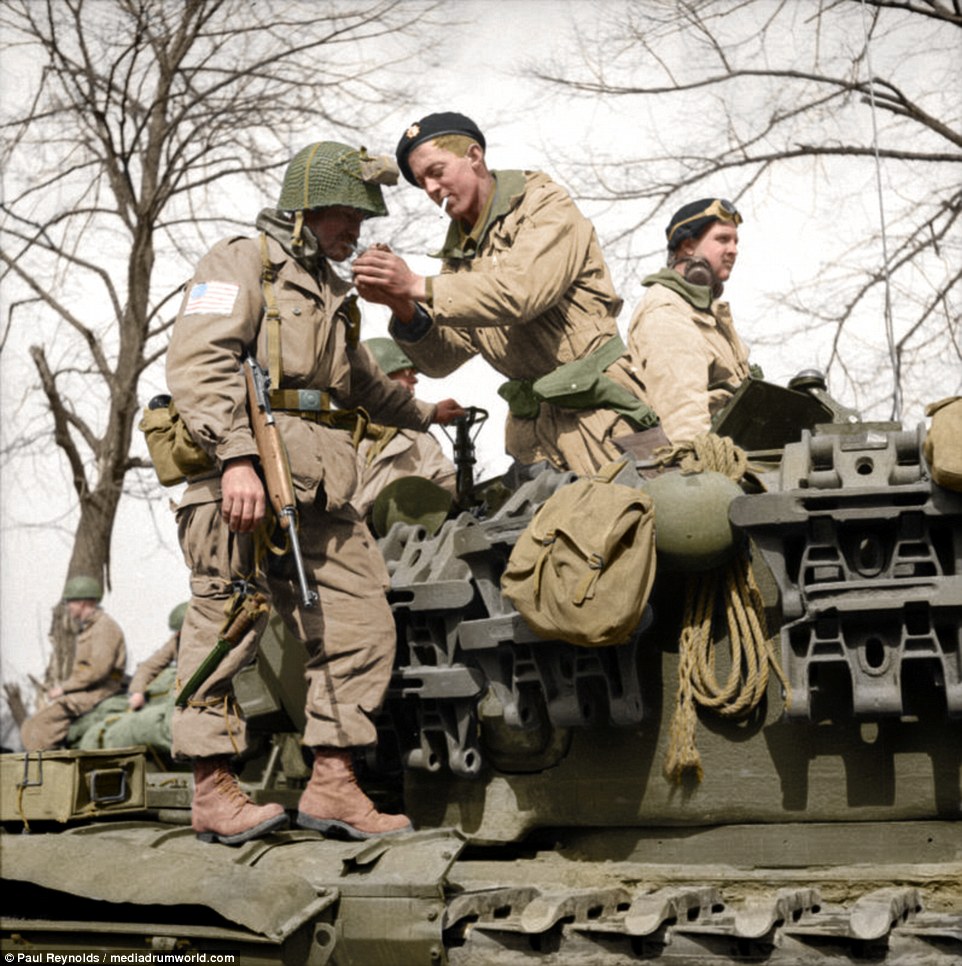 A paratrooper from the American 17th Airborne Division gets a light from a Churchill tank crewman of 6th Guards Armoured Brigade near Dorsten in North Rhine-Westphalia in Germany, on March 29, 1945

The invasion had required the transport of soldiers and material from the United Kingdom by troop-laden aircraft and ships, the assault landings, air support, naval interdiction of the English Channel and naval fire-support.