Colts fans OFFENDED by protesting players could get refund

An Indiana state congressman has introduced legislation aimed at forcing the NFL’s Indianapolis Colts to offer refunds to fans if the team’s players kneel in protest during the national anthem before home games.

Rep. Milo Smith said his proposal would compel the Colts to offer refunds in the first quarter to any fans offended by players’ attempt to raise awareness about inequality and police brutality by refusing to stand during the anthem.

Beginning with now-former San Francisco 49ers quarterback Colin Kaepernick in the 2016 NFL preseason, many players have generated nationwide controversy with the peaceful demonstrations over the last two seasons. In October, Vice President and former Indiana Governor Mike Pence left a Colts game after several members of the visiting 49ers took a knee and locked arms during the anthem.

Trump also suggested that fans should walk out of the stadium if players protest. 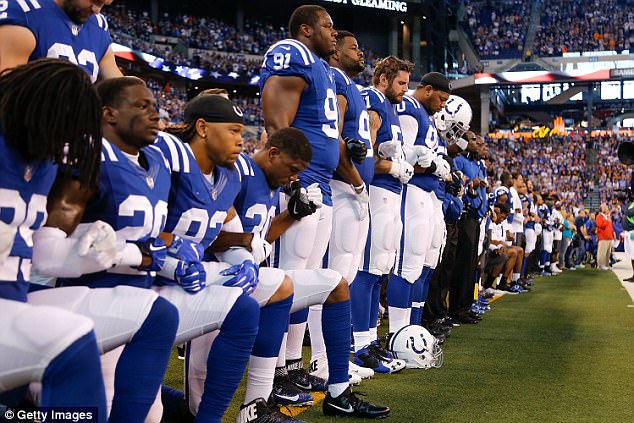 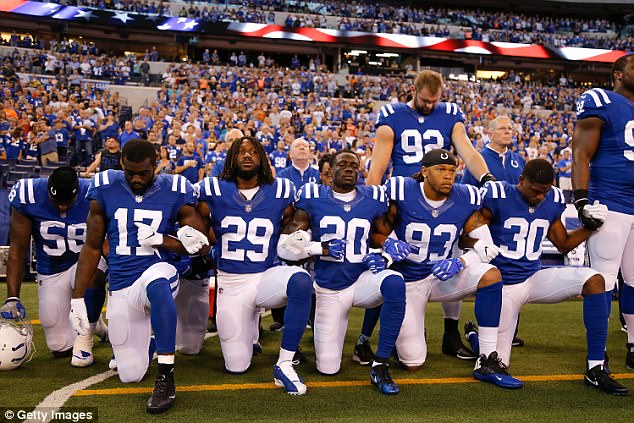 Outside of the September 24 game, Colts players have not been protesting during the anthem 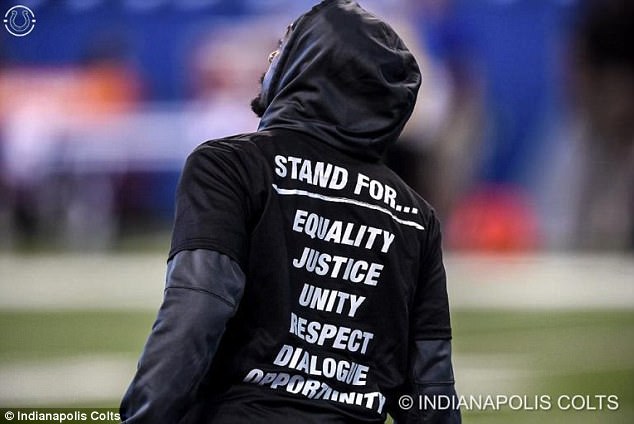 The Colts have refrained from protesting since September 24, instead wearing a shirt during warmups that reads ‘Stand for… equality, justice, unity, respect, dialogue, opportunity’

Smith, a Republican from the 59th district, is willing to take that a step further by giving the fans a chance at a refund.

The Colts have not commented on the matter.

For the most part, the Colts players have not been protesting this season. However on September 24, after Trump referred to protesting players as ‘sons of b******’ in a speech in Alabama, the entire team locked arms along the sidelines before a game against the Cleveland Browns as players including wide receiver Matt Hazel, safeties Malik Hooker and Darius Butler, as well as defensive lineman Al Woods took a knee.

Smith said he attended the game with his daughter, and while they did not leave, the experience of seeing players kneel in protest ‘didn’t sit right with’ him.

The Colts players released a statement after the game which explained that the players ‘who kneeled did not intend to disrespect our flag, our National Anthem or those who serve our country.’

Since then, the Colts have refrained from protesting, instead wearing a shirt during pre-game warmups that reads ‘Stand for… equality, justice, unity, respect, dialogue, opportunity.’ 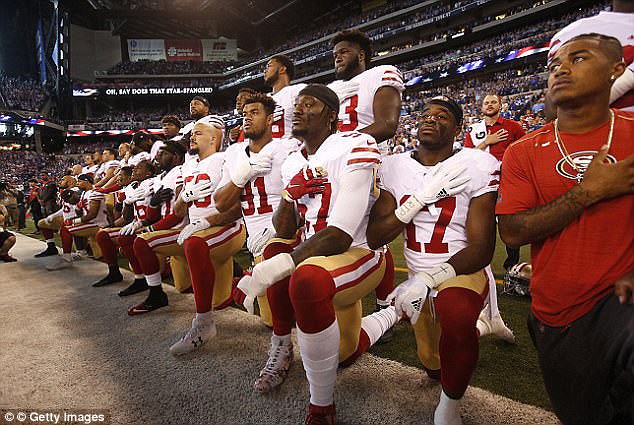 In October, Vice President and former Indiana Governor Mike Pence left a Colts game after several members of the visiting 49ers took a knee and locked arms during the anthem 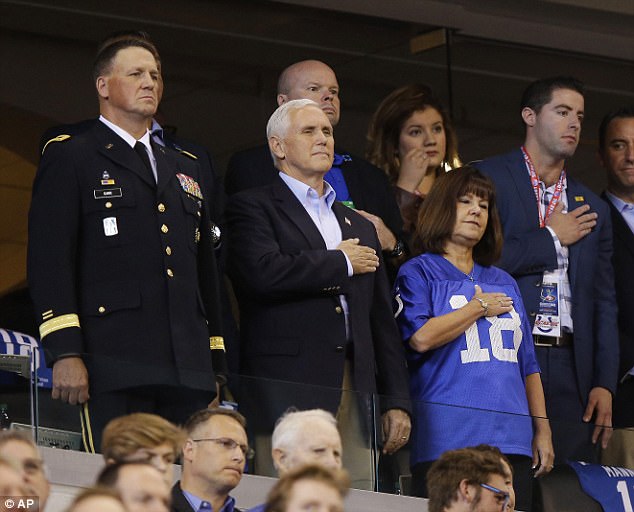 According to Smith, though, his proposal would not deny anyone their right to free speech.

Furthermore, his bill would not compel the Colts to give refunds if visiting players kneel in protest, as the 49ers did on October 8 in Indianapolis.

A well-known conservative, Smith helped advance a proposed constitutional ban on same-sex marriage in 2014, according to The Star – a move that was strongly criticized by Smith’s son, who happens to be gay.

‘I know he loves me. That’s important,’ Chris Smith told The Indianapolis Star on Sunday. ‘But I’m just upset that he is voting the way he is.’

‘Recently, there have been several misperceptions regarding a personal choice made by members of our team to bring awareness to prevailing issues facing our nation. To be clear — those of us who kneeled did not intend to disrespect our flag, our National Anthem or those who serve our country. We all have family and friends who are servicemen and women. We appreciate and respect the incredible sacrifices they make.

But as NFL players, we have a platform. And as Americans, we have a responsibility to speak up for those who cannot speak for themselves. Our intention was to raise awareness and continue critical conversations about real equality, the injustices against black and brown people, police brutality, respect, unity and equal opportunity. Our players are hurting, our people are hurting, our neighborhoods are hurting and kneeling was a direct response to that hurt.

But what makes football so special is the way it brings people together — fans, players, coaches, all of us. We represent different races, backgrounds and beliefs, but we come together for a common goal. That togetherness seen on the field and in the stands when we play should resonate even when we leave the stadium.

In that same spirit, as unified Americans, we will respect all forms of peaceful protests, as they are protected under the First Amendment of the US Constitution. Some of our players may kneel, while others may stand. But this is just the beginning. There is much work to do, and it will take all of us. 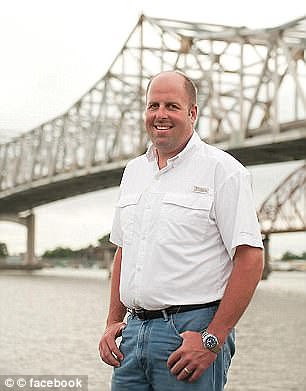 Lee Draga is suing the New Orleans Saints for a refund of his $8,000 season tickets as well as attorneys fees because of his objection to players’ peaceful protests during the anthem

Lee Dragna, a businessman from Morgan City, Louisiana, filed the suit on December 12 in the 24th Judicial District Court claiming that he spent $8,000 on season tickets for the ‘entertainment and intellectual enjoyment’ of his family.

However, the suit continues, Dragna and his family have not attended a Saints home game since Week 2, when he says certain players did not come out for the singing of the national anthem.

Dragna says the reaction by angry fans, which included cursing and spilling beer, is ‘borderline dangerous’ and effectively made his tickets unusable by his family and any customers who would have otherwise received his tickets.

And for that, Dragna insists Saints owner Tom Benson is ultimately to blame.

‘The Saints created that behavior by condoning it,’ Dragna told the New Orleans Advocate.

‘Apparently, these players were following the lead of [former San Francisco 49ers quarterback] Colin Kaepernick by disrespecting the flag, the anthem, the USA and those who have served and are serving the USA in our military,’ the suit says.