Frank Reich’s firing as head coach of the Indianapolis Colts wasn’t personal, team owner Jim Irsay told ESPN amid a wave of criticism over the decision.

Most notably, Philadelphia Eagles coach Nick Sirianni slammed the dismissal following Sunday’s 17-16 win over the Colts in Indianapolis, telling reporters, ‘that s*** was for Frank Reich.’ Sirianni is a former Colts assistant and Reich mentee.

Reich was fired by Irsay on November 7 following a 3-5-1 start and was shockingly replaced by former Colts center Jeff Saturday, an ESPN commentator whose coaching experience was limited to high school football.

Frank Reich’s firing as head coach of the Indianapolis Colts wasn’t personal, team owner Jim Irsay told ESPN amid a wave of criticism over the decision 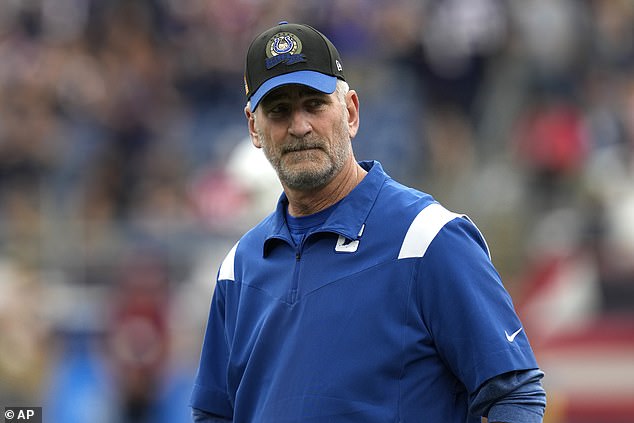 Frank Reich (pictured) was fired by Irsay on November 7 following a 3-5-1 start and was shockingly replaced by former Colts center Jeff Saturday, an ESPN commentator whose coaching experience was limited to high school football 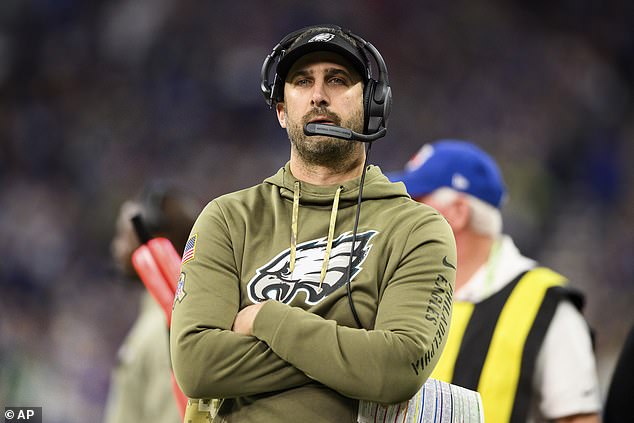 Philadelphia Eagles coach Nick Sirianni slammed the dismissal following Sunday’s 17-16 win over the Colts in Indianapolis, telling reporters, ‘that s*** was for Frank Reich.’ Sirianni is a former Colts assistant and Reich mentee

‘Frank is a treasured friend of my family and all my daughters,’ Irsay told ESPN. ‘We go back a long, long way. I’m very, very close to Frank, and I’ve known Frank for many decades. He’s like family.’

Irsay pointed to the contract extension that he gave Reich before the season began in spite of the fact that the Coach still had two years remaining on his deal at the time. The decision wasn’t easy, Irsay admitted to ESPN, but he ultimately agreed to a new deal to lock up Reich for five more seasons.

‘I’ve been doing this for over 50 years, and I’ve never, ever, ever, ever given a coach an extension when there’s two years left on the contract,’ Irsay said. ‘But [I did it] because of the closeness with him and our family, and because I hoped that maybe it would be something that would help strengthen him in his position and his own belief.’

Irsay also defended his decision to hire Saturday, who has gone 1-1 since taking over as interim head coach.

To the Colts owner, Saturday’s appointment was a once-in-75 year move.

‘You have to understand that Jeff’s a very unusual person that was in a very unusual position to have the type of qualities that would make him able to make a transition like this,’ Irsay said.

‘Most of the time, it is gonna be pretty hard. Could I make a hire like this again? Probably not. I mean, if I was lucky enough to live long enough to do this for 75 years, it’s probably once in 75 years. I mean, it was a rare thing because the circumstances presented themselves that way.’ 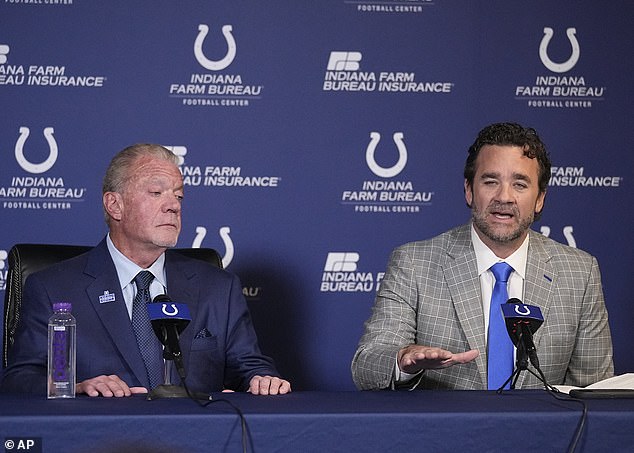 Irsay defended his decision to hire Saturday, who is 1-1 since taking over as interim head coach

And although he has a close, personal relationship with Saturday, Irsay insisted to ESPN that he was not hired because of their friendship.

‘I mean, I wasn’t gonna pick up the phone and hire Dallas Clark or Dwight Freeney,’ he said. ‘No, they wouldn’t be ready.’

As for the team, Irsay admits that the goals of the season have changed – perhaps an indication that Indianapolis is taking a long-term approach.

‘The trajectory’s changed,’ he said. ‘People can write their stories and everything else. But, look, we won a tough game on the road in Las Vegas, after [previously] really being unable to compete. And we come in and play a team that’s probably gonna be in the NFC championship game (the Eagles) with just a remarkable quarterback.

‘People think that Jeff was gonna come in be a miracle worker. I mean, what kind of delusional trip were they on? They have their original narrative and anything that goes against that narrative, they don’t wanna write until they have to. And eventually they will. They’ll see the light.

WHAT IS THE NFL’S ROONEY RULE?

Named for late Pittsburgh Steelers owner Dan Rooney, the Rooney Rule is an NFL policy requiring teams to interview ethnic minorities from outside the organization for head-coaching and top-executive positions.

Despite the rule being on the books since 2003, the NFL currently has only three black head coaches, not including Carolina Panthers interim head coach Steve Wilks and Miami Dolphins head coach Mike McDaniel, who is biracial.

‘But all we can do is focus on Pittsburgh, and then when the offseason hits, we’ll do a serious and dedicated interview process, which I’m looking forward to.’

The decision to hire Saturday drew criticism from various angles and media commentators, largely because many coaches have labored for years without such an esteemed opportunity.

The Fritz Pollard Alliance (FPA) has since inquired as to whether Irsay’s hiring process aligned with NFL rules.

FPA released a statement last week, saying ‘in light of the recent interim head coaching hire in Indianapolis, the FPA has initiated an inquiry with the NFL into whether this hiring process conformed with NFL Hiring Guidelines for naming an interim Head Coach.’

Saturday was hired without any coaching experience at the professional and college level. Though, he had previously coached high school football in Georgia at Hebron Christian Academy.

While Saturday may not have had coaching experience at the pro level, he was a six-time Pro Bowler and Super Bowl XLI champion following an illustrious 14-year NFL career.

Prior to his enshrinement into the Colts hot seat, Saturday had been a football analyst for ESPN. He is the first media member to move from the broadcast chair to an NFL head coach’s headset.

The NFL’s controversial Rooney Rule – which requires franchises to interview a minimum of two minority coaching candidates – does not apply to interim head coaching hires.

DailyMail.com’s request for comment from FPA and Executive Director, Rod Graves, was not returned. 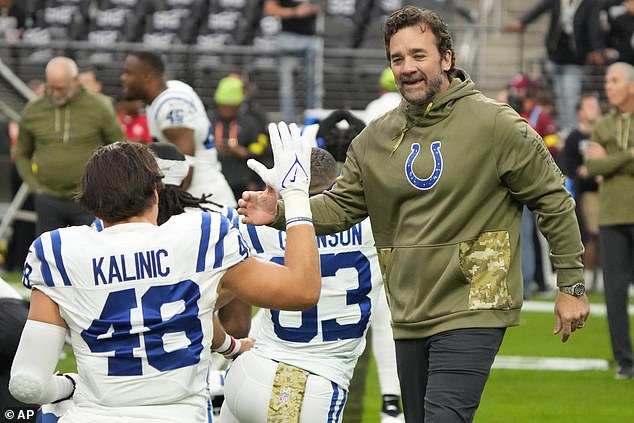