‘I’ve lived with suicidal thoughts my whole life’: Comedian Adrian Edmondson tells of disabling brakes on moped after row and driving into traffic

By Izzy Ferris and Ross Kaniuk For Daily Mail

Adrian Edmondson has revealed he has spent much of his life believing ‘suicidal thoughts are normal’.

The comedian told BBC radio listeners ‘I am nuts’ as he detailed his lengthy mental health battles.

The 65-year-old recounted an incident from the 1970s which saw him risk his life after he tampered with the brakes on his motorbike before driving off after an argument with his former wife.

It was not until 2007 that the former Young Ones actor realised that such thoughts ‘are not normal’ and started to ‘get an inkling that I might be nuts’. And it was only then, after 22 years of marriage to his second wife, the actress Jennifer Saunders, that he told her of his struggles.

She urged him to get help, but he avoided taking further action until, in 2011, he was hit by the deaths of two friends to suicide.

‘I resolve never to cause that amount of pain,’ he said.

Edmondson, whose friend and co-star in the sitcom Bottom, Rik Mayall, died of a heart attack in 2014, said: ‘I think suicidal thoughts are normal. I’ve lived with them all my life. I’ve looked at Tube trains rushing into the stations… I’ve looked over cliffs. I’ve read up on the contents of the medical cabinet. I know how to do it.’

Edmondson, who told his story in an essay for Radio 3, spoke of his marriage at university when he and his girlfriend were 19. They separated 18 months later and, in a row, his ex-wife threw ‘her wedding ring under the wheels of passing traffic’. He said: ‘That night I slacken the brake cables on my motorbike so that they’re basically useless and go for a ride.’ He told listeners on his Signs Of Life series how he came to a crossroads and drove on.

‘The other drivers swerve, skid about, blow their horns, and miraculously avoid me.’ After this a doctor put him on tranquilisers. He said of them: ‘I don’t like not being able to think, even if the thoughts are somewhat gloomy. I stop taking them. I go back to uni. 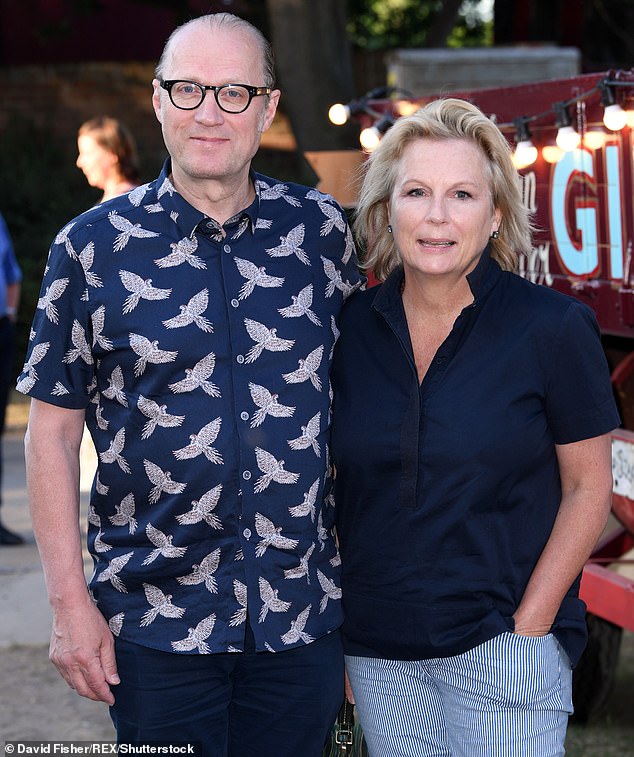 Edmondson’s second wife Jennifer Saunders urged him to get help, but he avoided taking further action until, in 2011, he was hit by the deaths of two friends to suicide

‘I pretend nothing has happened. I sit my finals… The force of repression has always been strong with me, I’m quite good at drinking and letting things get worse.’ In his late 30s he became an insomniac and began hyperventilating. But it was not until 2007, when writing the sitcom Teenage Kicks with Nigel Smith, that he started to change.

He said: ‘[Smith’s] remarkably cheerful. One day I ask him how he manages it… He says that suicidal thoughts are not normal. This is a shock, and it’s when I start to get an inkling that I might be nuts.’ He then finally revealed to his wife his history of suicidal thoughts.

‘It’s not the sort of thing that comes up when you’re dating, and I never found the right moment to tell her that I’m nuts. She’s shocked. I am a very good actor. She’s sad and worried… and tells me I really need to see someone. I agree and prevaricate.’

In 2011 the suicide of two friends moved him to act. He said: ‘I finally go to see a nut doctor. He puts me on anti-depressants and I worry they will alter me and take away my creativity.’ Concluding, he said: ‘I can’t say that I’m normal but then I don’t think anyone is. We are all nuts.’

For confidential support call the Samaritans on 116 123 or visit www.samaritans.org