Comedian Cally Beaton talks to ME & MY MONEY

No laughing matter: Cally Beaton left behind a six-figure salary to become a comedian just before the pandemic

Cally Beaton gave up a high-flying career as a TV executive to become a comedian just before the pandemic – and she has no regrets. Cally was earning a comfortable six-figure salary when she quit her job, only to find all the gigs she had lined up for 2020 were cancelled.

She tells Donna Ferguson she never doubted her decision and feels fortunate enough to have had sufficient savings to see her through lockdown.

The 53-year-old single mum is making her debut on the Christmas special of comedy show Live At The Apollo. It airs tonight at 9.45pm on BBC2.

Not to be materialistic. I grew up without much money, surrounded by people who had more than average. Both my parents were teachers at the boarding school I attended, Port Regis in Dorset, where all the other pupils were privileged and wealthy. For example Zara Phillips later went there.

My parents rented a staff house in the grounds for £1 a year. They didn’t talk much about money, but I overheard a few anxious conversations. It was always a big deal when I needed new school shoes or a new uniform. Our holidays, which I loved, would be in a camper van or my aunt’s ramshackle cottage without any heating.

I learnt not to spend what you don’t have, and to get into property. When my parents were in their 50s, they suddenly had to work out what they were going to do when they could no longer live in that staff house. I realised quite young that to have security, you need somewhere to live.

Yes, for about 18 months when I was in my early 20s. I had left my first job – in television – to move to Amsterdam with a Dutch man I’d met who later became the father of my two children. I had a job lined up which I lost on the first day because the company went bust – and my boyfriend’s job fell through as well.

That was the poorest I ever was. I managed to get some work to cover my bills, but nothing beyond that. I’d buy cheap food and cook in bulk. I couldn’t even afford to call my family in the UK. It was all very isolating.

I think anyone who works in a boardroom gets paid silly money compared to everyone else. But as a comedian, it would be for Live At The Apollo, which is being broadcast tonight.

It’s the biggest gig most comedians can get in terms of money. It’s 20 minutes on stage for a five-figure sum. But you work on your set for many years, honing it, gigging with it, and once it’s been on Live At The Apollo, you can never do it on TV again.

It was 2019, the year I decided to give up my job as senior vice president of international programming for what is now called Paramount, one of the biggest US studios.

I was at the top of my game, responsible for a big global team of people who rolled out American content worldwide. I used to get bonuses based on financial performance, and we had some shows that did incredibly well that year. I made a comfortable six-figure salary and was sitting pretty financially.

But my heart wasn’t in it any more. I worked long hours while doing comedy on the side, four nights a week, and was spending one week in every four in New York.

It was too much of a juggling act. So I traded in all the status and luxury of a secure job to follow my dream in comedy… just before the pandemic.

Did you struggle during the pandemic?

No. I was sick with Covid for the first two months, but I was extremely fortunate financially. I had savings and I didn’t have a big mortgage to pay.

Of course, my diary emptied. I lost a couple of gigs that would have been my big TV breaks, but I never doubted my decision. I got into Zoom comedy gigs and I started up my own podcast, interviewing celebrities, entrepreneurs, writers and academics.

I didn’t earn lots of money, but I kept the wolf from the door. My podcast is still going and forthcoming guests include Dragons’ Den’s Deborah Meaden and broadcaster Kirsty Wark.

What is the most expensive thing you have bought for fun?

I’ve been a single mum since my two kids, who are now in their 20s, were tiny. My son is autistic and has always been obsessed with primates. So when he was 17, I spent thousands of pounds – well into four figures – taking him and his sister on a family holiday to Borneo to see orangutans in the wild. My son is now a primate keeper at a zoo in Devon. 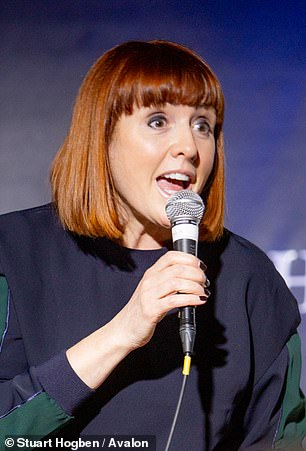 Buying my first house in 1996, a two-bedroom railway cottage in Kentish Town, North London for £200,000. I bought it after I fell pregnant unexpectedly in my 20s.

At the time, I was working for American cable channel MTV. If it hadn’t been for that happy accident, I’d never have made the sensible decision to get into property. Eighteen months later, I needed more space and an indoor toilet, so I put the house up for sale. A lady in her 60s knocked on my door – she owned a five-bedroom Victorian townhouse nearby and was looking to downsize.

Her house was an absolute tip – like a squat – but it had massive potential. So I swapped my house for hers and paid her £100,000 as a differential. I used the money I saved on stamp duty to renovate it and I’ve been living in it and renovating it ever since. It’s probably now worth upwards of £1.5million.

Yes, I started in my early 30s after taking financial advice. I have recently moved my entire pension portfolio into ethical stocks.

I don’t invest in the stock market outside my pension. I’m too scared to do that.

I like a takeaway coffee. I buy one most days.

I would incentivise companies to move to a four-day working week by offering them subsidies – as long as they paid their employees the same salary as they would get for five days. I think this would make workers more productive and the workforce more diverse. I also think it would encourage entrepreneurship and side hustles by giving people the time and space to create new ways of making money.

Yes. I don’t think it would be right to be fortunate financially and not do something for charity. I pick different charities and donate according to what is meaningful to me at the time.

Every month, at the moment, I donate to Barnardo’s, Oxfam, Greenpeace, a wildlife trust or a zoo, a homeless charity, a charity that supports neurodiversity such as the National Autistic Society and a cancer charity.

I probably give £2,000 a year to charity and I feel lucky I can afford to do that.

To leave money for my two children, but in a way that is idiot-proof. I am in the process of unravelling an inheritance left to my parents and it’s complicated. I don’t want my kids to ever go through that.