Commanders are set to unveil a new mascot, but could face legal battle with former ‘Hogs’

The Washington Commanders are prepared to unveil a new mascot on Sunday, but the online fan voting could lead to a legal battle between team owner Dan Snyder and former Redskins players.

In September, the Commanders revealed the two finalists: A dog and a hog.

The problem is, a group of former team players who were nicknamed ‘the Hogs’ have already trademarked the latter option and are threatening litigation.

In September, the Commanders revealed the two finalists: A dog and a hog

The retired players are members of an LCC, known as O-Line Entertainment, and are comprised of former teammates from the great Washington teams of the 1980s. The group includes retired offensive linemen Joe Jacoby, Mark May, and Fred Dean, former tight end Doc Walker, and legendary running back John Riggins.

‘If they go forward on Sunday and make the hog their mascot and try to trademark it, we are going to be forced into trademark infringement litigation,’ O-Line Entertainment attorney Seth Berenzweig told Front Office Sports.

‘We’ve made it very clear to them that we believe they’d be infringing on the trademark, and they need to arrange a licensing deal with the players. They have refused to do that.’

The term ‘Hogs’ was bestowed on Washington’s beefy offensive line in the 1980s and early 1990s, when the team was still known as the ‘Redskins.’ Washington would go on to win three Super Bowls with the Hogs, who spawned their own group of fans, known as the ‘Hogettes’ – supporters typically adorned in women’s clothing and pig noses. 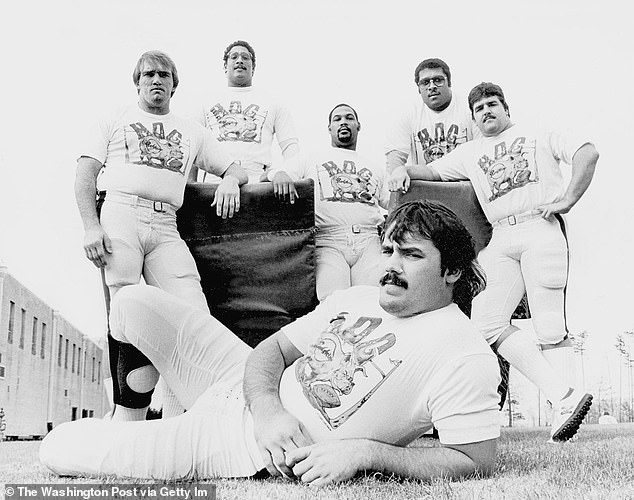 The term ‘Hogs’ was bestowed on Washington’s beefy offensive line in the 1980s and early 1990s, when the team was still known as the ‘Redskins.’ Members have included Russ Grimm (front), Joe Jacoby, George Starke, Fred Dean, Mark May and Jeff Bostic 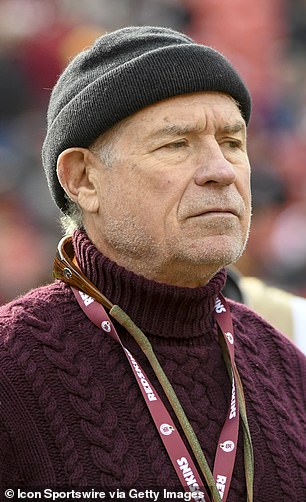 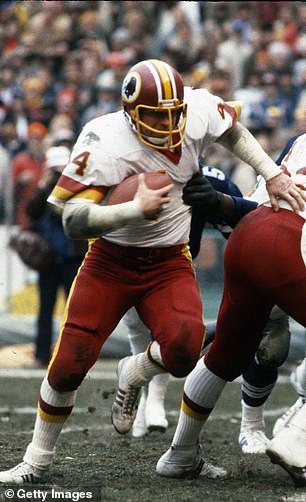 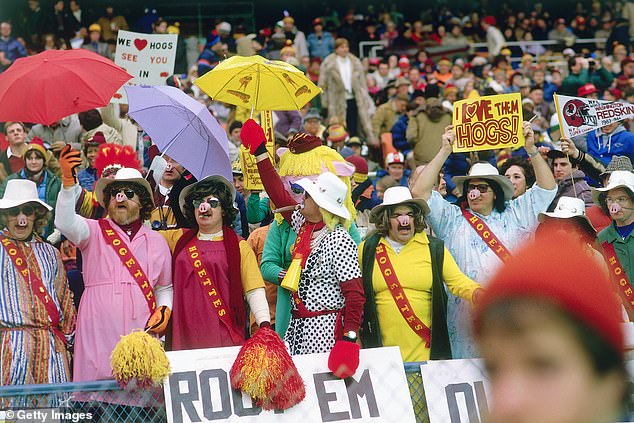 The team had planned to honor the Hogs during Sunday’s game against the rival Dallas Cowboys. Former head coach Joe Gibbs and the Hogettes (pictured at a game in 1984) are also expected to be attending the festivities

O-Line Entertainment previously filed for trademarks on ‘Hogs’ and ‘Original Hogs’ last summer. The US Patent and Trademark Office is expected to deliver an initial ruling in the coming weeks, according to FOS.

Trademark attorney Zak Kurtz told FOS that the Commanders stand a good chance of winning a court battle over the use of ‘Hogs’ if the situation arises.

‘Unless they’re commercially using the words ‘OG Hogs’ or ‘Original Hogs,’ it would be a tough claim to win if the Commanders challenged them,’ Kurtz said. ‘Even then, Washington could probably prevail. The team could say, ‘We had ownership to it first.’

The team had planned to honor the Hogs during Sunday’s game against the rival Dallas Cowboys. Former head coach Joe Gibbs and the Hogettes are also expected to be attending the festivities.

‘We are planning a celebration of the greatest offensive line ever to play the game,’ the Commanders said in a statement. ‘The Hogs are a key part of our franchise’s history and we want to keep their legacy alive with the next generation of fans. We have been working with the Hogs on this event for six months and look forward to welcoming them and Coach Gibbs back.’ 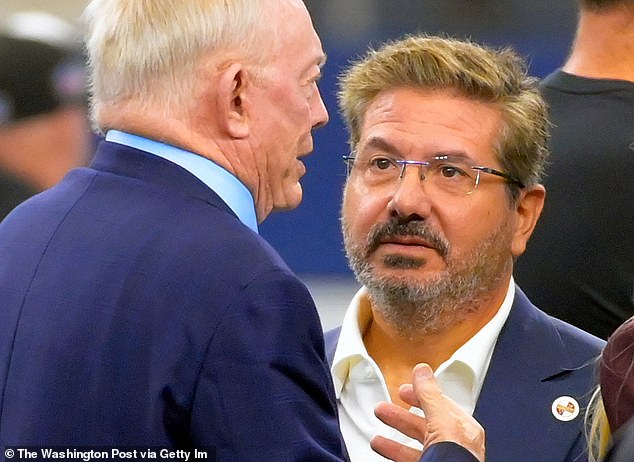 After defending the use of ‘Redskins’ for years, team owner Dan Snyder relented in 2020 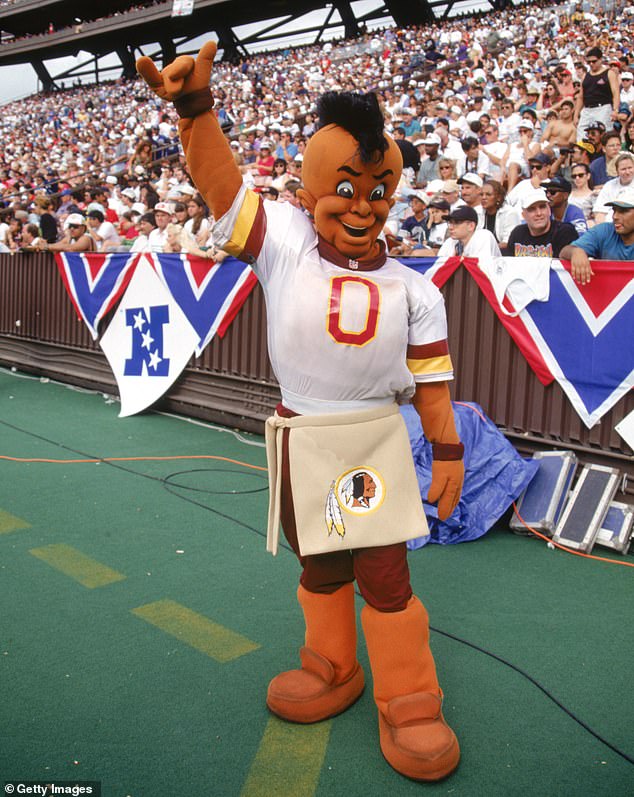 The Washington Redskins mascot stands on the sidelines during the 1995 NFL Pro Bowl at Aloha Stadium on February 5, 1995 in Honolulu. The team dropped the name ‘Redskins’ in 2020 following years of protests from Native American groups, who deemed it offensive

The mascot debate comes less than a year after the Commanders unveiled their new and current team name following years of controversy over the use of ‘Redskins.’

The rebranding process began in 2020, when the team succumbed to yearslong pressure by dropping ‘Redskins,’ which is considered offensive to Native Americans. In 2021, the team played as the Washington Football Team.

During their ‘Redskins’ years, the team did have a dark-skinned, mohawked mascot adorned with loin cloth featuring the club’s logo.

The club originated in Boston, where then-owner George P. Marshall had wanted to call them the ‘Braves’ but opted for his second choice due to the existence of the city’s National League baseball team, which has since moved on to Milwaukee and Atlanta.

The term’s origin is disputed, according to a 2016 Washington Post article, that claims it was first used as a pejorative as early as 1863 in Minnesota.

‘The State reward for dead Indians has been increased to $200 for every red-skin sent to Purgatory,’ read an announcement in The Winona Daily Republican. ‘This sum is more than the dead bodies of all the Indians east of the Red River are worth.’ 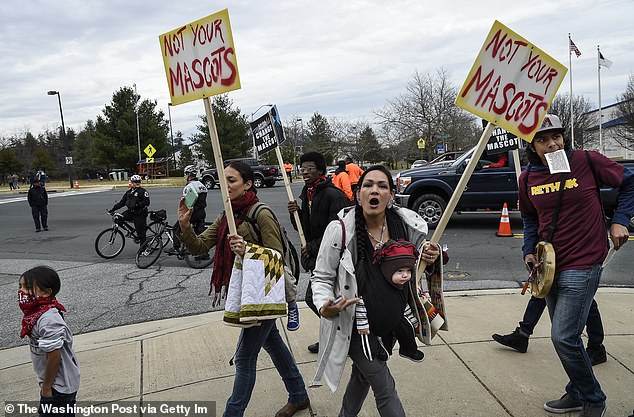 A 2016 Washington Post poll found that 90 percent of the 504 Native American respondents were ‘not bothered’ by the team name. Snyder ultimately wrote an open letter, defending his decision to keep the moniker by citing the study.

However, that survey and other similar studies have been slammed by journalists and social scientists as being unreliable.

‘The reporters and editors behind this story must have known that it would be used as justification for the continued use of these harmful, racist mascots,’ read a statement from the Native American Journalists Association. ‘They were either willfully malicious or dangerously naïve in the process and reporting used in this story, and neither is acceptable from any journalistic institution.’

In March of 2020, UC Berkeley revealed a study that found that more than half of its 1,000 Native American respondents were offended by the team name.

The Supreme Court ruled in 2017 that a trademark law barring disparaging terms infringes on free speech rights. Prior to that, the United States Patent and Trademark office had tried to revoke the Redskins’ trademark because it was a racial epithet.

Before the 2021 season, the team banned fans from wearing headdresses to home games.

Another lawsuit is the last thing the Commanders need after being sued twice by Washington DC Attorney General Karl A. Racine on accusations of sexual harassment and an alleged scheme to defraud ticket holders out of security deposits.

Snyder is currently exploring a potential sale of the team he bought in 1999, with offers reportedly exceeding $7 billion. 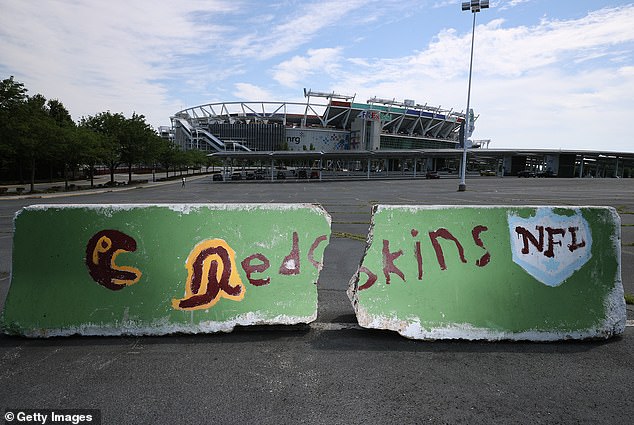