Leicester’s recent run of four matches without a win has seen them slip into the bottom half of the Premier League table and Rodgers has been proactive in ensuring the rumours don’t add another unnecessary distraction.

‘I spoke to our leadership group,’ confirmed Rodgers, who is one of several managers mentioned as a candidate to succeed Ole Gunnar Solskjaer. ‘I hear the bits and pieces, so it stabilises everything. 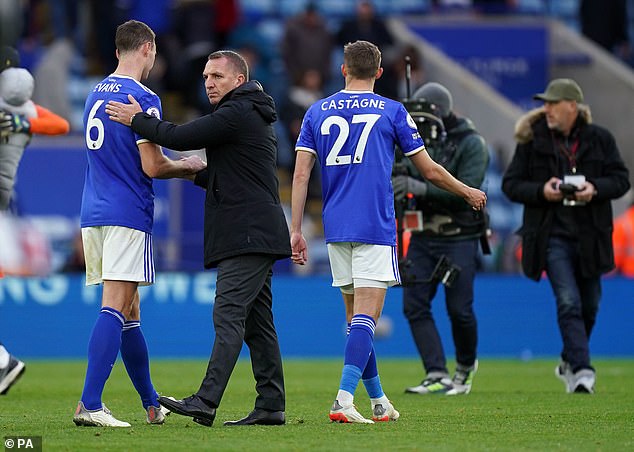 ‘There can be lots of things going on, speculation, and I normally don’t even think about it, but I understand it may have a bearing on other people.

‘It was a case of just giving some stability and speaking to the senior guys. They know our commitment to the club.’

Leicester need any help they can get right now. They beat Chelsea to win the FA Cup in May but Saturday’s game was far removed from that.

Without Youri Tielemans (calf) as well as long-term injuries to Wesley Fofana and James Justin, the Foxes were second best in every department and were booed off at the end of each half.

Goals from Antonio Rudiger and former Leicester player N’Golo Kante put the visitors in command in the opening half-hour and substitute Christian Pulisic wrapped up the scoring in the second half for the Premier League leaders.

‘Collectively we have to defend better, that always raises the confidence,’ said Rodgers. ‘We are not defending as well as we’ve done with little preparation time, that is where we have suffered.

‘We can’t be sorry for ourselves. We have to be more defensively robust and not concede soft goals. You have to defend well to attack well. From that, confidence grows and you can play your football.’

Chelsea certainly played their football with wing-backs Reece James and Ben Chilwell doing a passable impression of Cafu and Roberto Carlos with the intensity of their forward runs.

Rudiger was a revelation, part of a defence that scarcely gave a chance, and he brilliantly headed Chelsea in front from Chilwell’s corner.

The 28-year-old German, who rarely featured under Frank Lampard, is out of contract in the summer with Bayern and PSG among the clubs prepared to give him a handsome salary.

Chelsea boss Thomas Tuchel is impressed with Rudiger’s attitude while talks continue over a new deal to keep him. 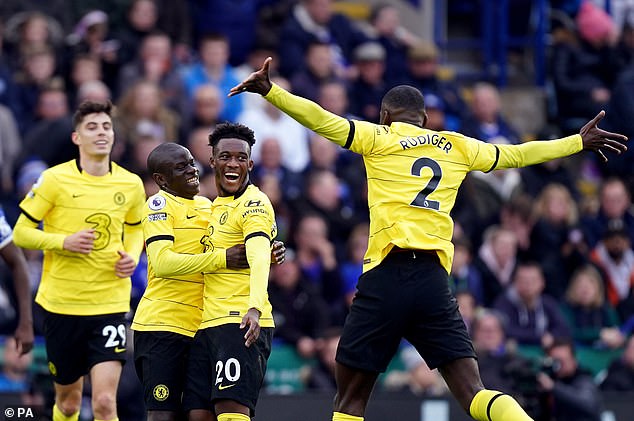 Leicester were comprehensively beaten by Chelsea, 3-0, at the King Power on Saturday

‘It does not affect his mentality or quality, it absolutely does not affect his behaviour. He is fully committed to Chelsea right now,’ said Tuchel about the contract impasse. ‘Being in the most competitive league suits him perfectly. Let’s be patient and hopefully we will have a good decision.’

Tuchel modestly declined to brag about his role in turning Rudiger’s career around.

‘His quality means he can deliver no matter who is on the sidelines,’ said the coach, whose side face Juventus tomorrow in the Champions League — the competition they won last season.

‘We have a good relationship and he feels the trust and respect. He accepts his role and lives it to the maximum. We demand a lot from him but I don’t think he is depending on the coach.’

Leicester have their own opportunity to bounce back in the Europa League on Thursday, but for the time being they can only cast envious looks at Chelsea, who took two of their best players, Kante and Chilwell, and made it show on Saturday.