Food poisoning can be passed on through SEX: Common diarrhoea-inducing bacteria is also an STI, scientists warn

Anyone who has experienced food poisoning will know just how unpleasant it can be, and now a new study has warned that a common bacteria that causes the illness may also be an STI.

Researchers from the University of Oklahoma found that Campylobacter infection, the most common foodborne illness in the Western world, can also be spread through sexual contact.

While campylobacter infection is rarely serious, it can cause vomiting and diarrhoea, and can pose an additional risk for people with underlying health conditions.

Based on the findings, the team is urging doctors to talk to their patients about risks associated with sexual contact amid a bout of food poisoning.

Anyone who has experienced food poisoning will know just how unpleasant it can be, and now a new study has warned that the most common bacteria that causes the illness may also be an STI

Campylobacter is a germ that lives harmlessly in the gut of many animals and birds.

It infects the gut of humans and is a common cause of diarrhoea in people of all ages.

The disease is present all the year round but tends to be more common late spring and early summer.

In the study, the team set out to understand whether Campylobacter infection can be spread through sexual contact.

Dr Katrin Kuhn, who led the study, said: ‘This research is important for public health messaging and for physicians as they talk to their patients about risks associated with sexual contact.

‘Although Campylobacter infection is usually not a serious disease, it causes diarrhoea, which can result in people missing work, losing productivity or perhaps losing their job. It poses an additional risk for people with underlying health conditions.’

However, these methods of transmission don’t account for all cases of infection, leading the researchers to question whether it could be passed on in other ways.

In the study, the team focused on men who have sex with men, following an outbreak of Campylobacter infections in northern Europe among this group. 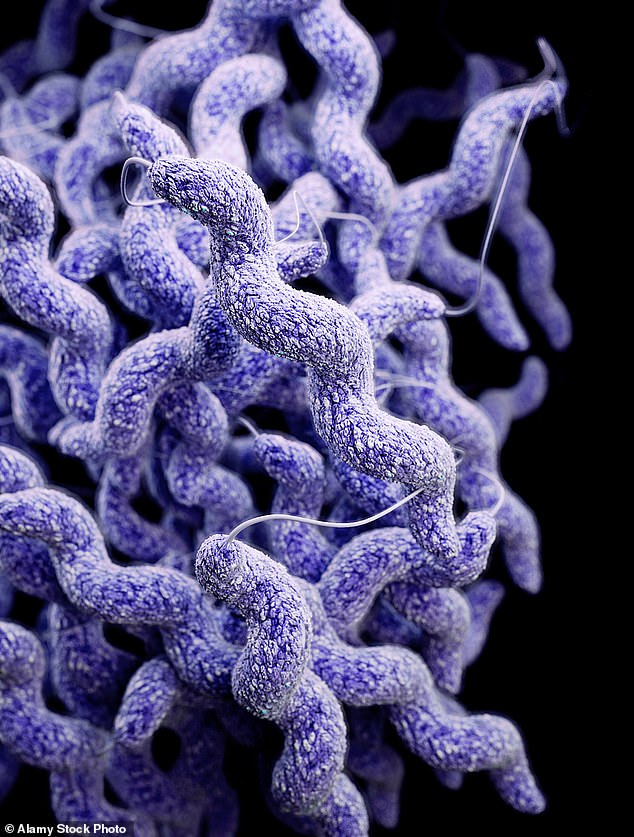 Their analysis revealed that the rate of Campylobacter infection was a whopping 14 times higher in men who have sex with men than control subjects.

Two other bacteria were used as comparisons in the study – Salmonella, which is primarily spread through infected foods, and Shigella, which can be transmitted through food or sexual contact.

While salmonella has a high infectious dose, meaning people must ingest a large amount before becoming ill, both Shigella and Campylobacter have low infectious doses, making transmission easier.

‘That’s an additional reason why we believe Campylobacter can be transmitted through sexual contact like Shigella is – because people can become infected when only small amounts of the bacteria are present,’ Dr Kuhn said.

The team believes that Campylobacter infections are likely much more prevalent than the numbers show, with just one in 20 people infected seeking medical advice.

While infection usually isn’t serious for most people, for those with underlying immune conditions such as arthritis, it can cause severe complications.

Dr Kuhn added: ‘This is an interesting time because COVID-19 has made people more aware of the importance of monitoring infectious diseases in general, not only during a pandemic.

‘There are many infections like the one caused by Campylobacter that make people sick.

‘It’s important that we spotlight the fact that these diseases exist and that we continue to conduct research on their effects and modes of transmission.’

WHAT TIPS CAN BE FOLLOWED TO AVOID FOOD POISONING?

Germs can survive across all of the different surfaces in the kitchen, so it’s essential to keep the cooking area and your hands clean.

Raw meat, poultry, seafood and eggs can spread germs to ready-to-eat foods if not kept separate.

The CDC recommends using separate cutting boards and plates when handling these ingredients.

They should also be stored separately in the fridge.

To cook food safely, the internal temperature must get high enough to kill the germs that could cause food poisoning.

The correct internal temperature varies by ingredient, and only surefire way to tell if food is safely cooked is to use a food thermometer.

Perishable food should be refrigerated within two hours of when it was purchased, and the refrigerator should be set to below 40°F.

Expiration dates aren’t the only indication of when a food item should be thrown away.

If something seems to have a strange smell or color, it’s probably better to be safe and pitch it.

Thawing frozen foods on the counter allows bacteria to multiply quickly in the outer parts as they reach room temperature.

Frozen foods should be thawed in the refrigerator, in cold water, or in the microwave.