Australia’s largest bank is facing billions of dollars in fines after becoming the target of financial regulators yet again.

The Commonwealth Bank has been hit with a lawsuit from the Australian Securities and Investments Commission over claims it sold superannuation products through its bank tellers – a practice which was banned in 2012 to prevent financial institutions from taking advantage of their customers.

The financial watchdog is alleging the Commonwealth Bank breached the ‘conflicted remuneration’ law a staggering 390,000 times.

Each individual offence carries a maximum penalty of $1million.

But despite the staggering potential fines that could be handed down by the federal court, a Commonwealth Bank spokesman said it is ‘misleading’ to suggest the bank is facing billion-dollar fines.

‘At present it is simply too early in the proceedings to speculate as to the amount of the civil penalty a court may award (if at all),’ he told the Guardian.

The bank is alleged to have pushed its Essential Super financial products at branches between June 2013 to October 2017, raking in $22million dollars in illegal fees.

Regulators say Commonwealth Bank then shared the proceeds with Colonial First State – a wholly-own superannuation subsidiary which is also a target of the lawsuit.

The legal action was made as a result of the 2018 Banking Royal Commission and comes after the Commonwealth Bank agreed to pay $530billion dollars after Australian Transaction Reports and Analysis Centre uncovered systemic breaches of money laundering and counter-terrorism financing laws. 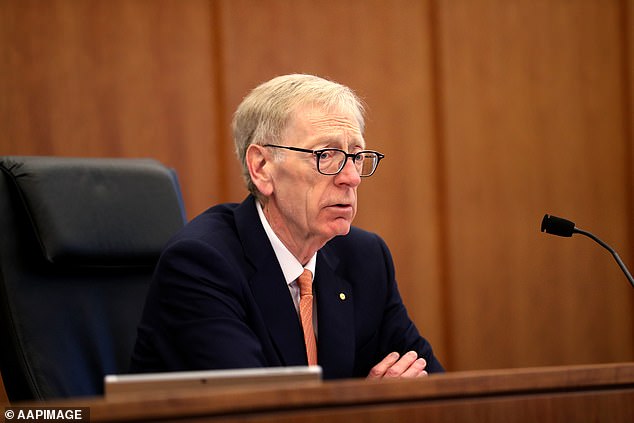 Commissioner Kenneth Hayne (pictured) makes his opening statements during the Round 5 hearing of the Royal Commission into Misconduct in the Banking, Superannuation and Financial Services Industry

All transactions over $10,000 must be reported to authorities under Australian law.

But between November 2012 to September 2015, individuals were able to dump larger sums of money into the Commonwealth Bank’s Intelligent Deposit Machines without the transactions being reported.

There were 53,500 of these breaches with the total number of transactions believed to be about $625million.

During the same time period, the bank was also found to have not properly monitored 778,370 accounts.

A date for the initial hearing is yet to be set by the federal court.