Commuters packed onto Tube services in London this morning as bus passengers will have to pay to use the service again from tomorrow.

Meanwhile, Transport for London (TfL) has today announced that charging for bus travel in the capital will resume tomorrow.

The new requirement will be rolled out across all buses ‘once further safety measures have been introduced to protect bus drivers’.

Heidi Alexander, Deputy Mayor for Transport, said: ‘I am pleased that TfL have made these changes which enable Oyster and to begin to be reinstated in way that protects passengers who have to travel by bus and our heroic transport workers.’

It comes as Sadiq Khan hinted that he was ‘considering’ making the wearing of face masks on Tubes and buses compulsory.

The Mayor of London has told people to avoid public transport unless it is impossible to work from home, and to wear face coverings. 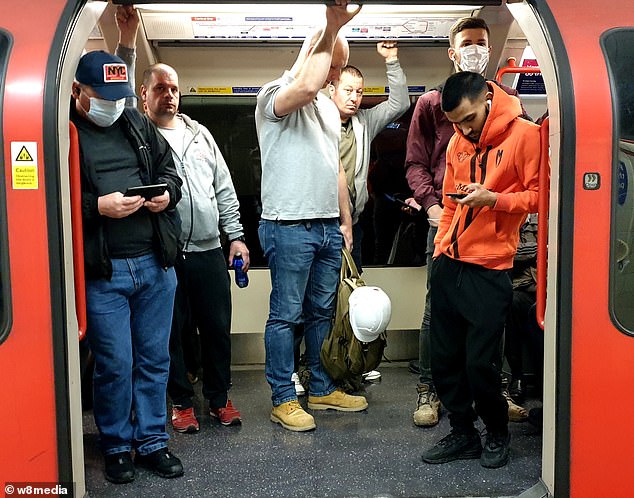 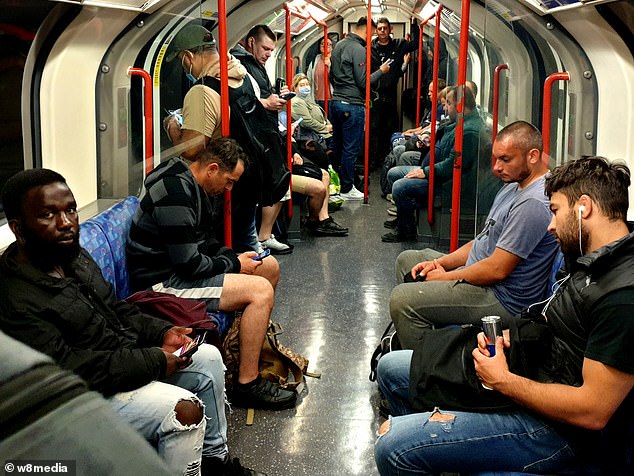 Angry commuters complained that they were unable to practice social distancing

From tomorrow, contactless, Oyster or concessionary card payments will initially be required on 85 routes served by single-door and New Routemaster buses.

Passengers have not needed to present their payment card since April 20 in a bid to reduce the chance of drivers being infected by coronavirus.

But the government is requiring TfL to resume the collection of bus fares as part of the £1.6billion bail out agreed last week.

TfL said that on buses where payments will be required, drivers’ protective screens have had the opening where cash was previously accepted sealed off, in addition to vinyl screens fitted last month to block communication holes.

TfL’s director of bus operations Claire Mann said: ‘This is a phased return to reinstating payments, so please follow the instructions and signage on the bus.

‘And whatever buses you use, please wear a face covering. This allows bus drivers, and those who need to use buses, to continue to do so safely.’ 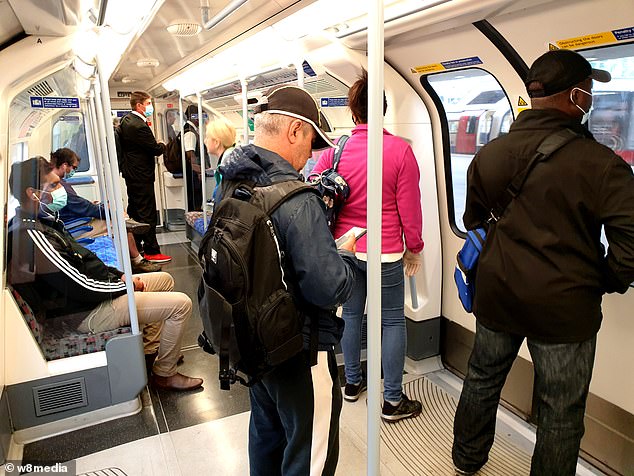 Not all lines were as busy as each other, with commuters able to practice social distancing 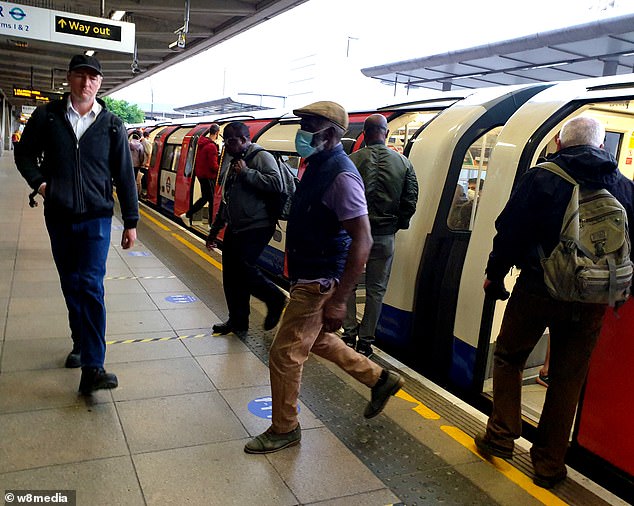 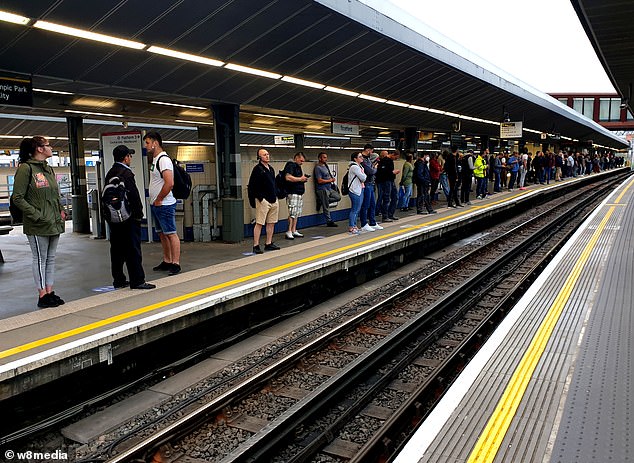 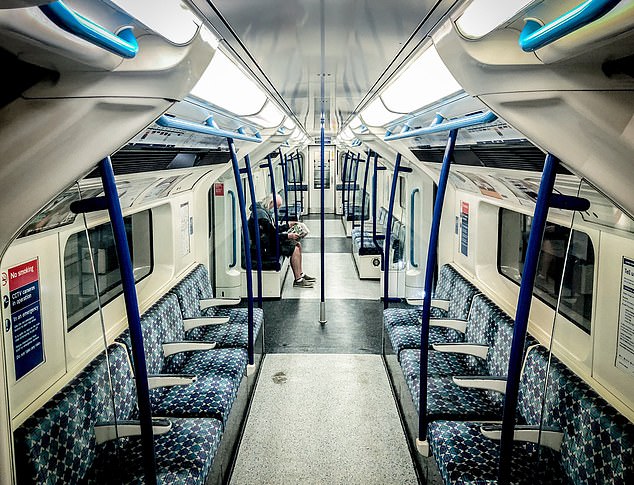 Jamie Penfold: ‘My first venture back on the TfL Tube since the first week of March. There’s something quite magically beautiful yet eerie travelling on the Victoria Line this morning’

TfL has insisted that during peak hours this week it has run over 75 per cent of Tube services on average across the whole network.

However, this has been rubbished by the biggest Tube drivers’ union, which said that its drivers believe that just 50 per cent of services are being run.

Posting an image of a deserted Tube carriage, he tweeted: ‘My first venture back on the TfL Tube since the first week of March.

‘There’s something quite magically beautiful yet eerie travelling on the Victoria Line this morning #lockdownuk #Covid19UK’.

Meanwhile, Downing Street yesterday said that underground travel in London is up to 25 per cent higher than last week.

However, Boris Johnson’s official spokesman claimed that Tube usage overall was down by 93 per cent compared to one year ago.

Bus usage was around 88 per cent lower than last year and rail passenger journeys were down 95 per cent on 2019 levels, the spokesman added.

Data provided by the Tube operator suggests that commuter numbers have been rising steadily this week, with a 2,000-passenger jump on Wednesday from Tuesday.

Yesterday, TfL data showed that up to 100,000 travellers used the service to get across the network, while 99,485 journeys were made on Wednesday. 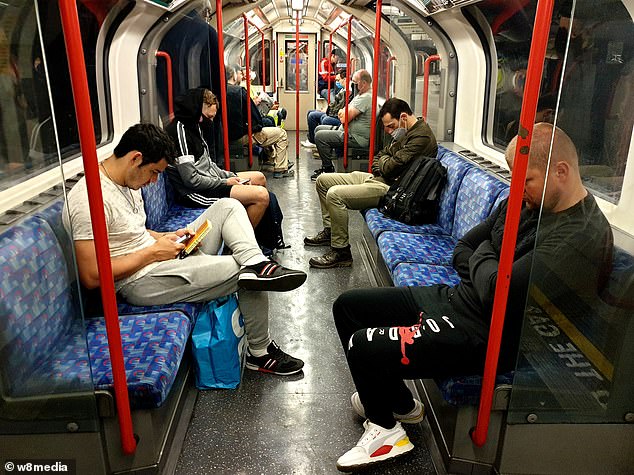 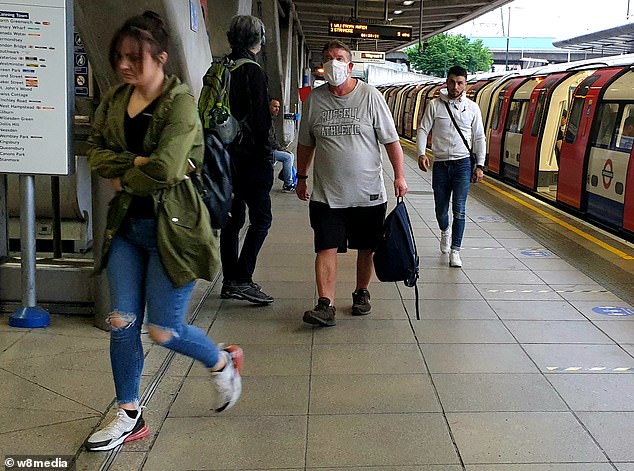 However, total numbers of passengers are lower than pre-lockdown, as authorities tell people to work from home where possible and only commute where necessary.

Sadiq Khan has told commuters only to use public transport if it is ‘essential’ and should wear face masks or coverings.

Yesterday the Mayor of London hinted that he was considering making it compulsory to wear face masks in line with government instruction.

Mr Khan said he hopes to persuade the government to change its position on the issue, but he has the option to ‘make it mandatory in the capital only’.

He told the London Assembly he will consider next week whether he needs to make wearing face masks on public transport in the capital mandatory.

The London Mayor will lobby the government in a bid to ‘reach a sensible compromise’, as he noted some train services in London are not under his control. 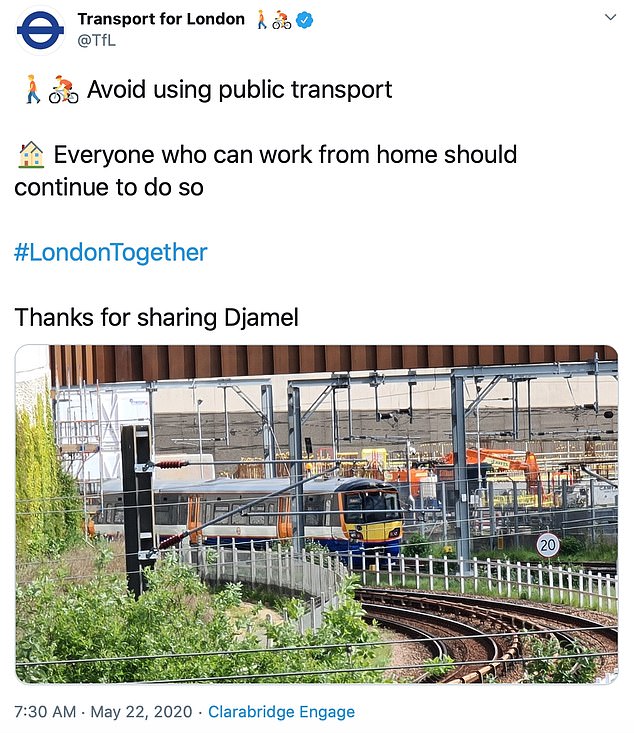 Mr Khan added: ‘I leave the option available, which is to make it mandatory in London only. But I’m hoping we can persuade the government to do the right thing.’

Existing guidance from TfL only goes as far as advising passengers to wear face coverings, which is in line with nationwide policy.

In a move that will force even more passengers on to the cramped public transport system, London’s congestion charge was reimposed on Monday – two weeks early.

The £11.50 daily levy for people driving into the centre of the city was suspended on March 23 and will increase to £15 from next month.

It comes after Mr Khan launched an investigation into the deaths of 33 TfL staff – including 29 bus drivers – associated with coronavirus.

TfL will work with University College London to ‘better understand the pattern of coronavirus infections and deaths among London’s bus workers’.