The city’s congested rail network was still in chaos on Friday afternoon, seven hours after a broken train at Town Hall station caused a major meltdown and partial closure of the T1 North Shore line during the peak hour morning rush.

Up to 250,000 commuters were caught up in the major delays with many spending hours stranded in stationary trains across Sydney.

Many Sydney commuters were late to work on Friday morning. Pictured is Town Hall station during the morning peak hour, where the major delays were caused

The delays were still being felt Friday mid afternoon, with Sydney Trains advising  commuters to delay any non-essential travel.

Commuters should also expect delays on their way home tonight.

Sydney Trains chief executive Howard Collins has since revealed ‘Frankenstein’ style electricity switches down tunnels underneath Town Hall had to be accessed by engineers before repairs on the train could begin. 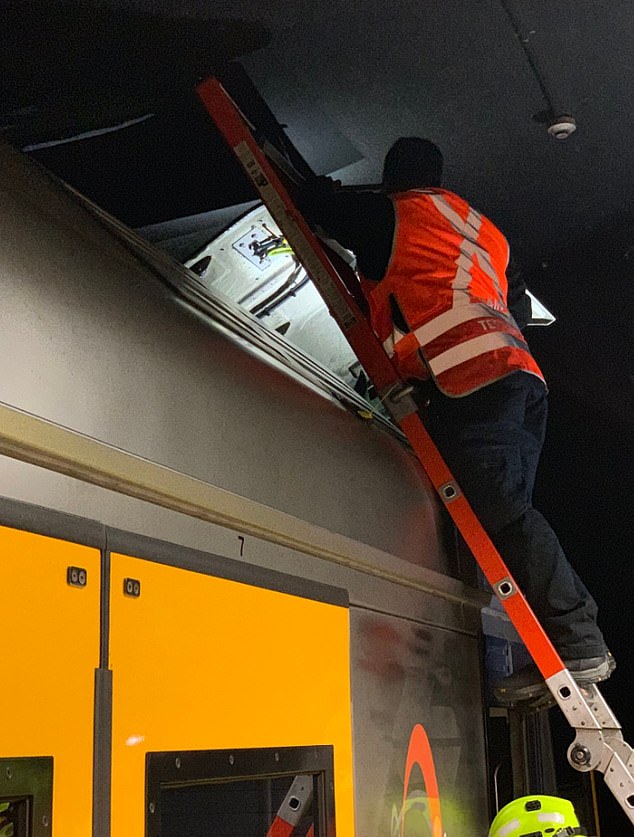 ‘We had to send men and women down tunnels, to pull big switches, to open and close them, which takes hours … it is archaic,’ Mr Collins told The Daily Telegraph.

‘They (the switches) are from … the 1920s and 1930s, they are isolation switches which were probably put in when we first electrified.

‘They are almost Frankenstein in their look, they do a great job, but as far as I’m concerned, the future for us … is a remote isolation switch where … services are disrupted for 15 minutes rather than three hours.’ 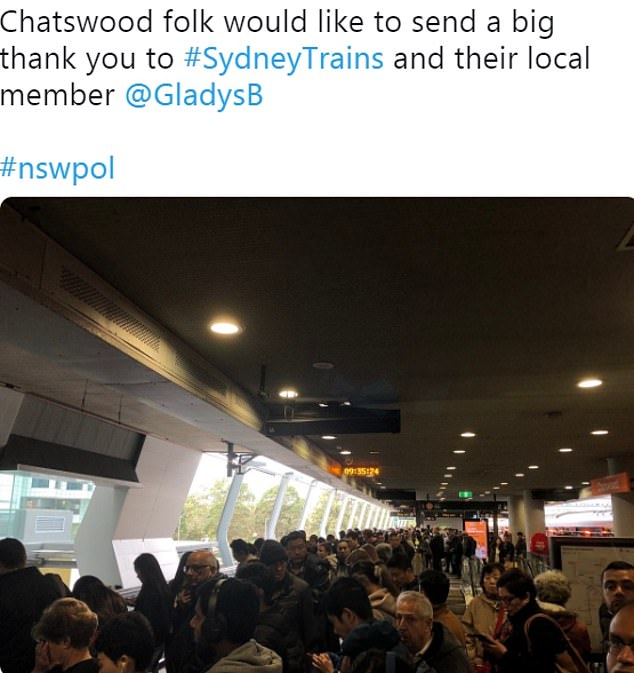 Hundreds of commuters took to social media to vent their frustrations.

‘Just get me out of here! We have been PRISONERS trapped in a train that has not moved for a good 45 minutes somewhere between Town Hall and Wynyard,’ one man tweeted at lunchtime.

The delays weren’t just confined to the CBD.

Long queues at stations including Newtown for buses, while platforms from Chatswood to Rhodes were also packed during the morning rush

Others  demanding compensation and ticket refunds.

Earlier in the morning, commuters on the partially closed North Shore line were  advised were urged to catch buses to North Sydney or travel via the northern line and change at Epping. 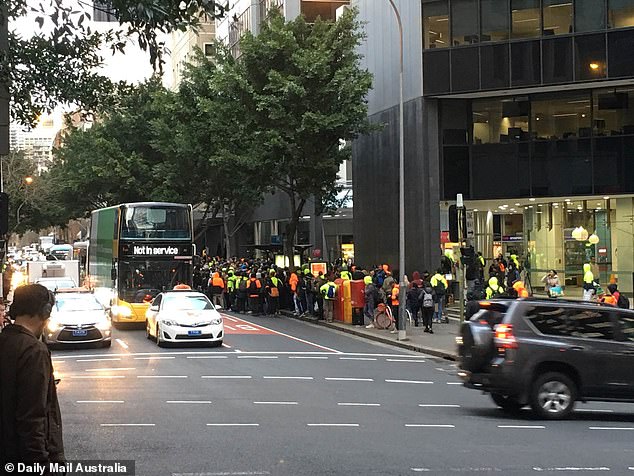 Queues for buses at Wynyard spilled onto the road.

‘No trains running over the bridge right now, the announcer at Wynyard suggested we walk over the Harbour Bridge to north Sydney as the buses were too busy,’ one man tweeted.

Services from western Sydney weer diverted onto the City Circle line instead of travelling their usual route to the north shore.

‘A loose hatch on top of a train is close to overhead wiring at Town Hall. To secure safely, the power from this section of track must be isolated. Our electrical crews are working to do this ASAP, and repair crews will then secure the hatch safely,’ Sydney Trains tweeted on Friday morning. 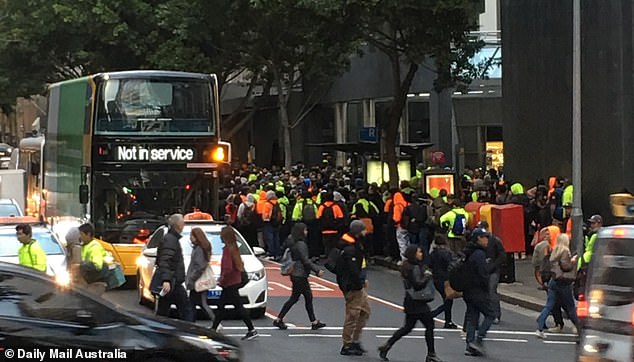 Services are shut down on the north shore line, leaving commuters stranded at Wynyard 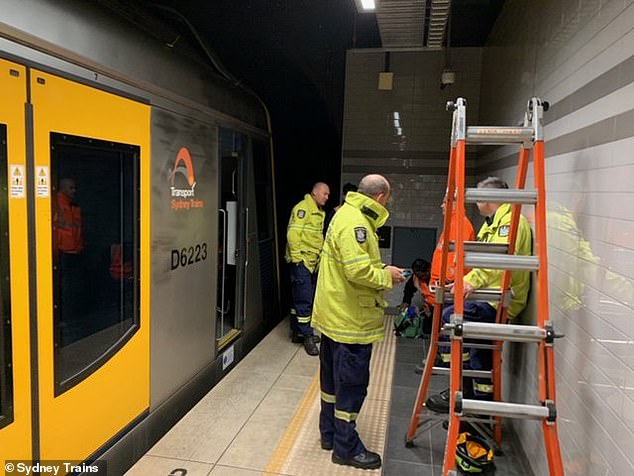 This train required mechanical repairs at Town Hall, sparking chaos across the network

Commuters across the network have been caught up in the chaos.

‘One train has a bit of a break down and the entire city circle system just completely shuts down,’ one commuter tweeted.

Another added:  ‘Without exaggeration, there has not be a single week this year without a cancellation or significant delays.’ 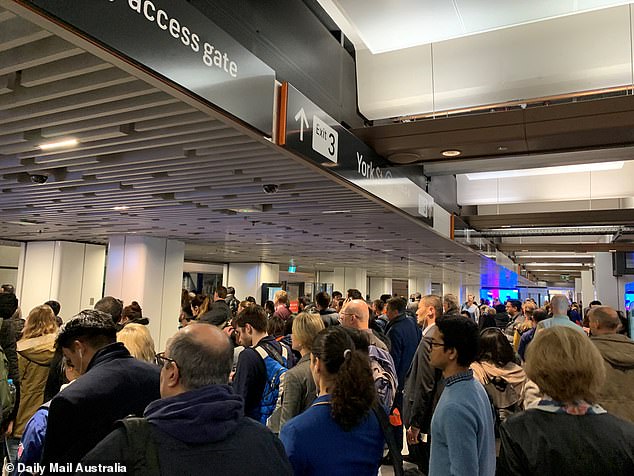 The delays caused mayhem for commuters travelling to the city. Pictured: Wynyard station 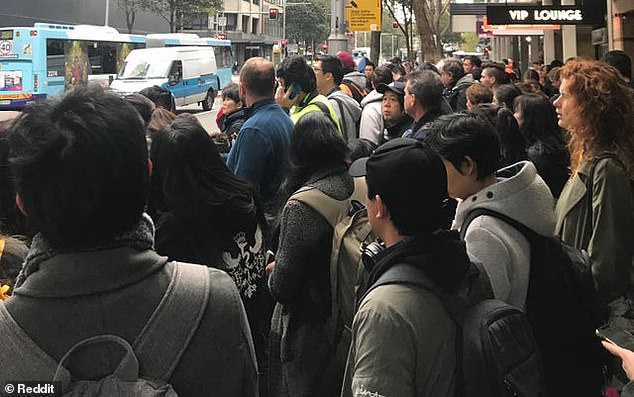