Conde Nast Traveller has revealed its 2019 Hot List of the best new places to stay from around the world – and it’s not hard to see why they made the list. We’re talking jaws on the floor ahoy.

Scroll down to see MailOnline Travel’s 10 favourite hotels from the 66 that make the cut.

Capella Ubud, pictured, on the Indonesian island of Bali, has been created to look like a tented camp pitched by early 19th-century spice traders 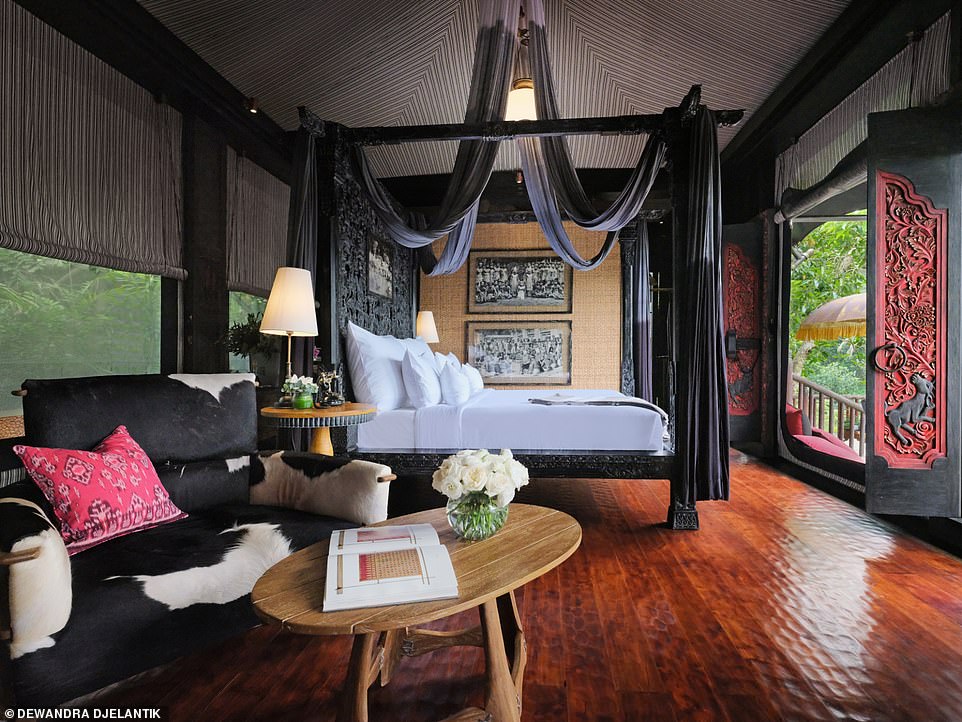 One of the rooms inside a tent at Capella Ubud. Guests must walk across suspension bridges to reach their rooms 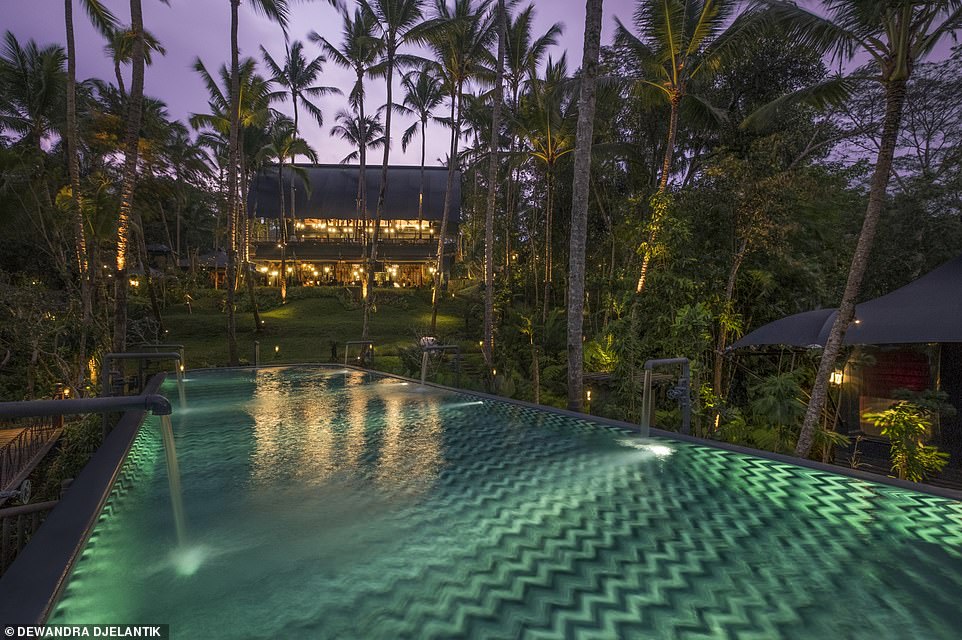 Conde Nast Traveller judges were impressed with the resort, saying a stay there is like returning to the island’s ‘former wild self’

Located on a 10-acre patch of jungle in the Indonesian city of Bali, Capella Ubud has been created to look like a tented camp pitched by early 19th-century spice traders.

Guests must make their way over suspension bridges to its 22 canvas tents, which each have saltwater plunge pools.

The judges said: ‘It’s ideal for those looking to approach Bali in a more conscious way – staying here is like returning to the island’s former wild self.’ 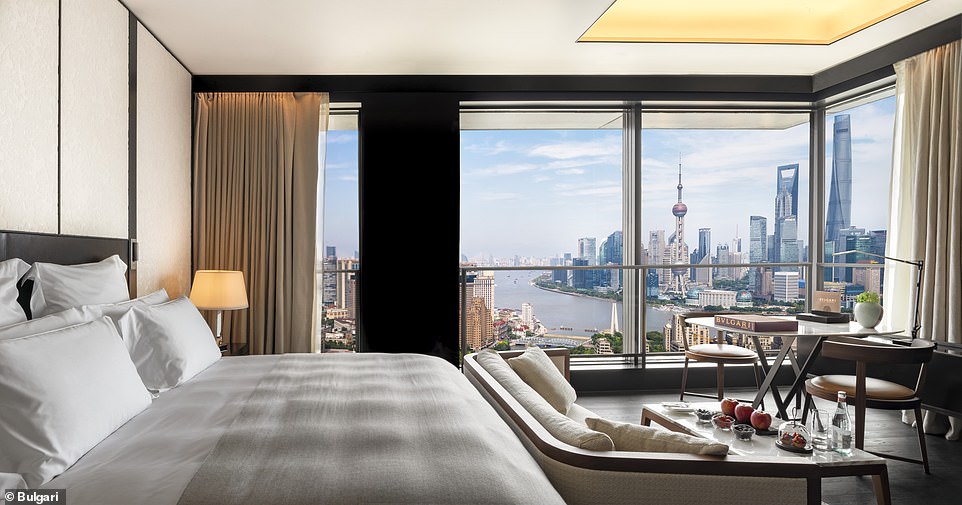 One of the 82 rooms at the Bulgari Hotel in Shanghai, which stands at over 42 storeys high 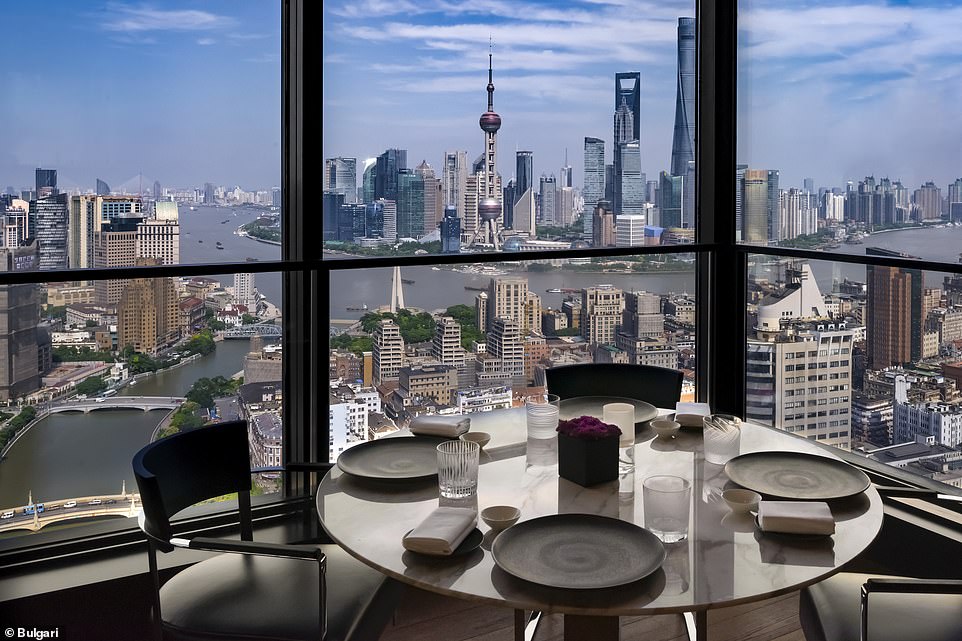 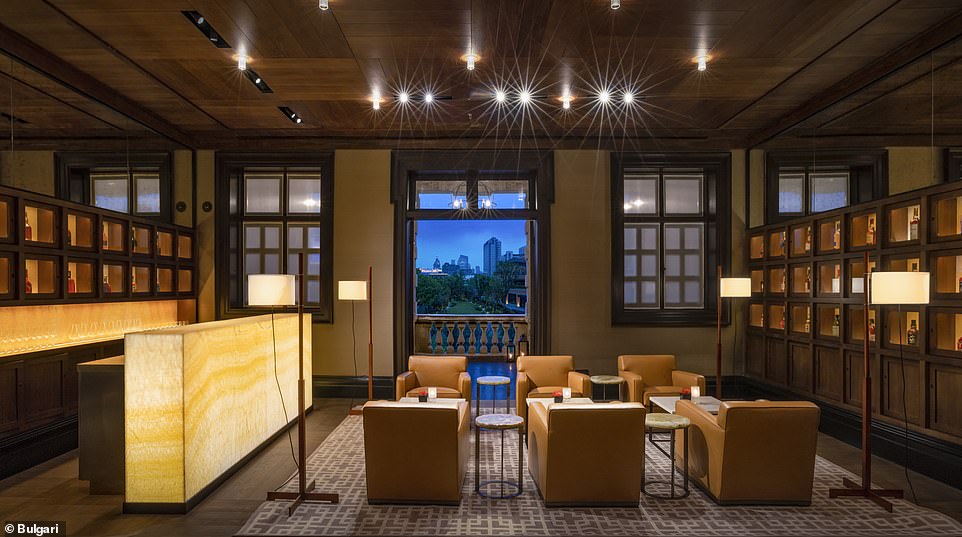 The Conde Nast judges were impressed with the hotel’s interiors and its mixture of Italian and Chinese design. Pictured is the hotel’s whisky bar

The Bulgari Hotel in Shanghai soars 48 storeys into the skyline and houses 82 rooms including the ornate Bulgari suite – said to be the largest in the city.

It made the list because the judges were impressed with its sleek and shiny mirror-like interiors.

They said: ‘It is an immaculately choreographed tussle between Italian and Chinese design cues, enacted in marble and bronze versus silk and lacquer.’ 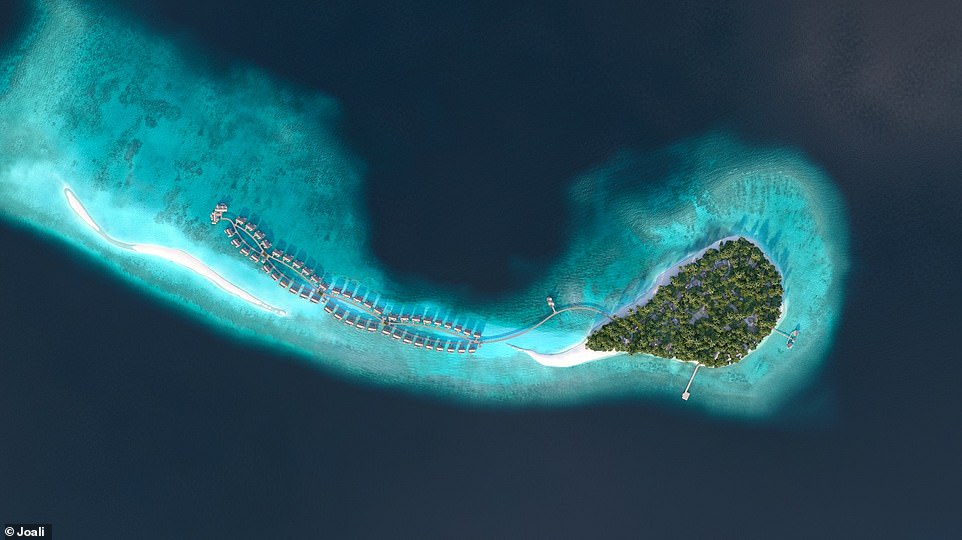 Joali, pictured, is an island hotel on the relatively undeveloped Raa Atoll in the Maldives 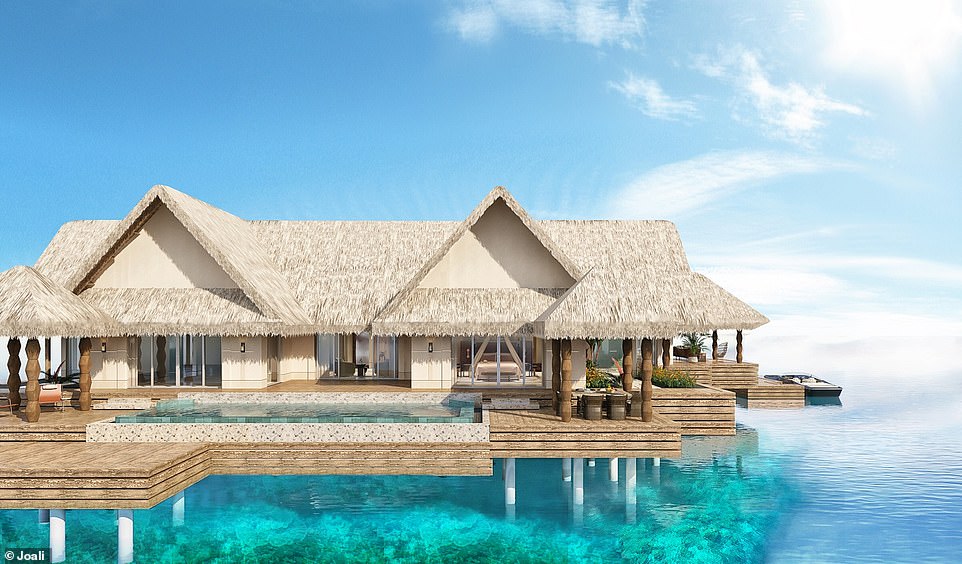 The Joali resort has a mixture of both over-water and beach-side villas. Pictured is one of the 49 over-water villas 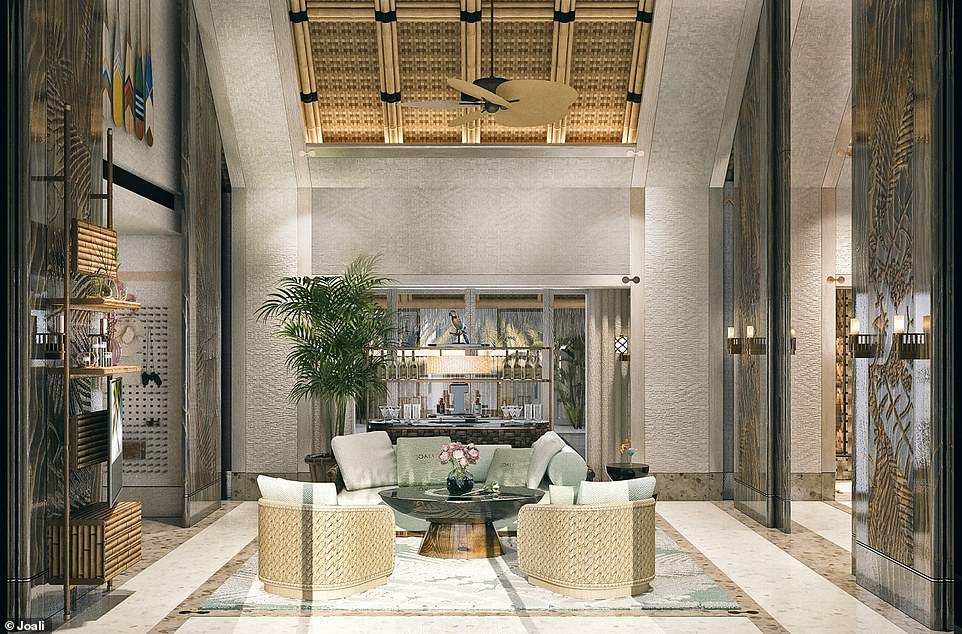 According to the judges, the hotel combines a Maldivian vibe with a Mediterranean feel and they add that ‘there’s been no scrimping when it comes to design’

An island hotel on the relatively undeveloped Raa Atoll, Joali combines a Maldivian vibe with a Mediterranean feel.

It has 49 over-water and 24 beach villas that come with palm roofs and rose-gold taps that resemble giant pebbles.

Conde Nast Traveller wrote: ‘Every last detail is simple and delicious, down to the coconut croissants. And there’s been no scrimping when it comes to design.’ 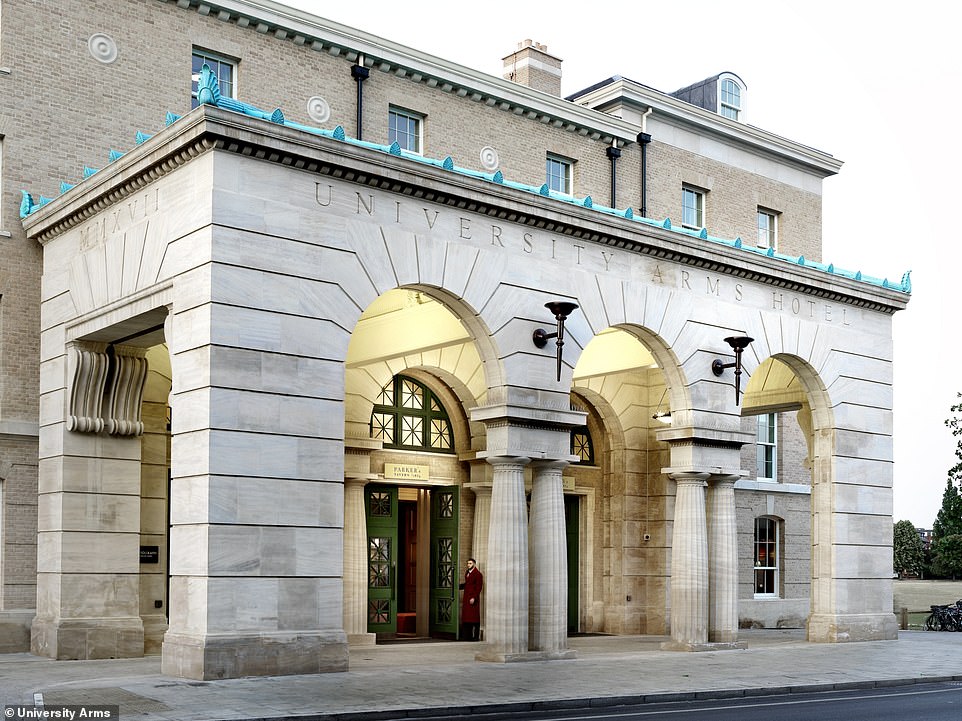 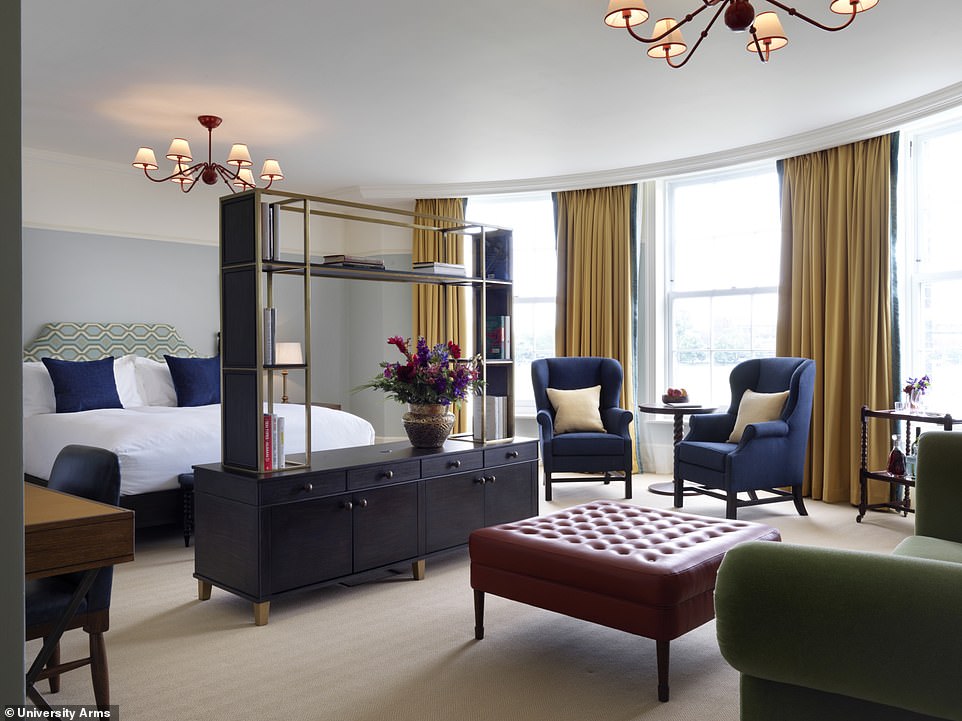 One of the spacious rooms at the University Arms. Conde Nast Traveller notes: ‘Cambridge has been arguably the smartest town in the land since about 1209. A mere 800 years later, it has a hotel to match’ 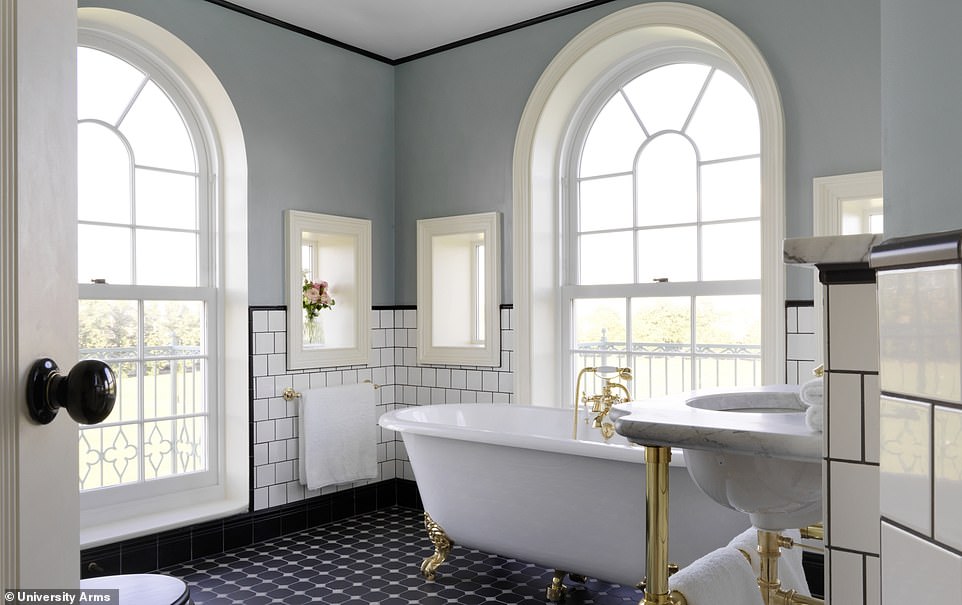 One of the ornate bathrooms inside the hotel. Another of its highlights is the contemporary British restaurant called Parker’s Tavern

The University Arms in Cambridge is a turreted Victorian pile that has been transformed into a 192-room hotel.

Among the hotel’s highlights, according to the judges, are its contemporary British restaurant called Parker’s Tavern and velvet upholstered bar.

Conde Nast Traveller said: ‘Cambridge has been arguably the smartest town in the land since about 1209. A mere 800 years later, it has a hotel to match.’ 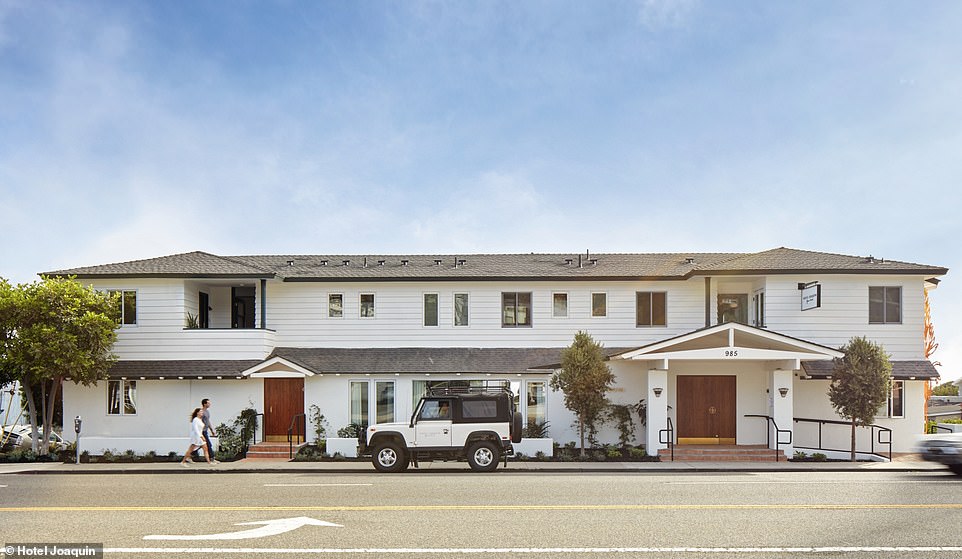 An exterior shot showing Hotel Joaquin, located on California’s Laguna Beach. It has been described as a cross between a bungalow, motor lodge and a beach house 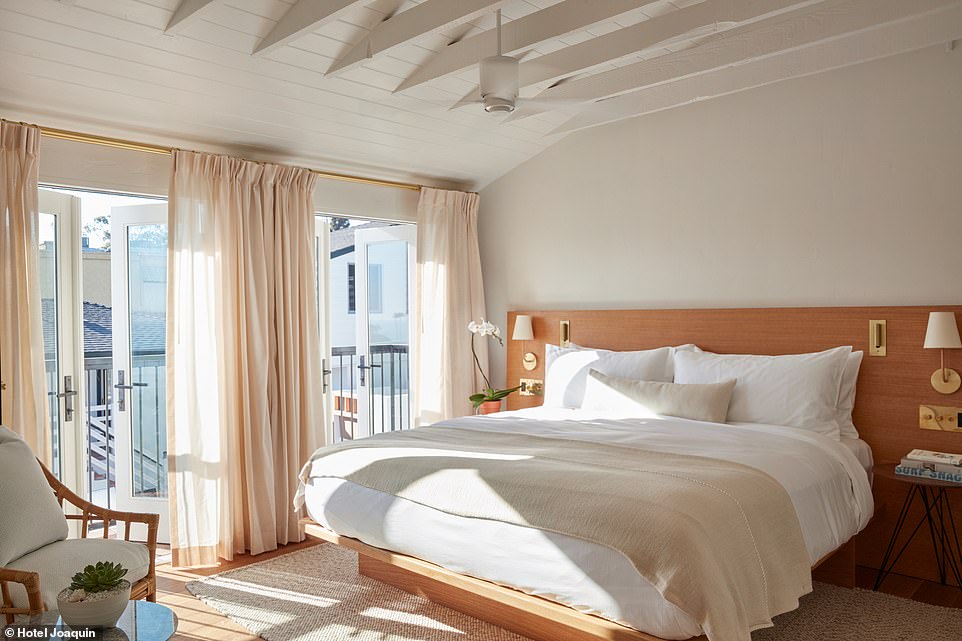 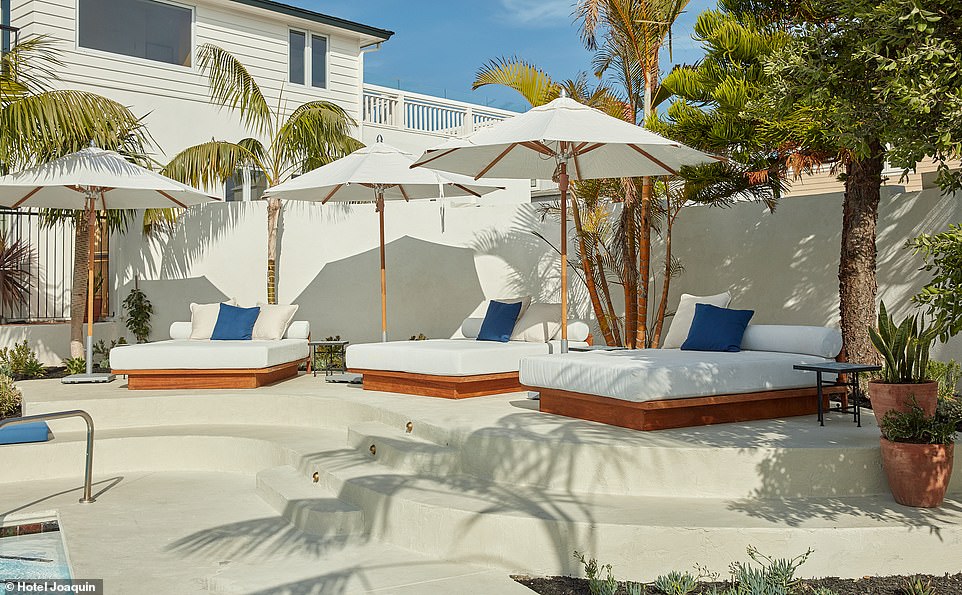 The area around the pool where guests can relax. Much of the furniture in the hotel is vintage with some even picked up at flea markets

Located on California’s Laguna Beach, Hotel Joaquin is described as a cross between a bungalow, motor lodge and a beach house.

Designer Robert McKinley picked up vintage chairs and oil paintings at flea markets in Normandy and tore down ceiling panels to leave rafters in rooms exposed.

The judges were impressed, explaining: ‘Finally the boutique scene has landed on this otherwise hyper-developed stretch of classic California coast.’ 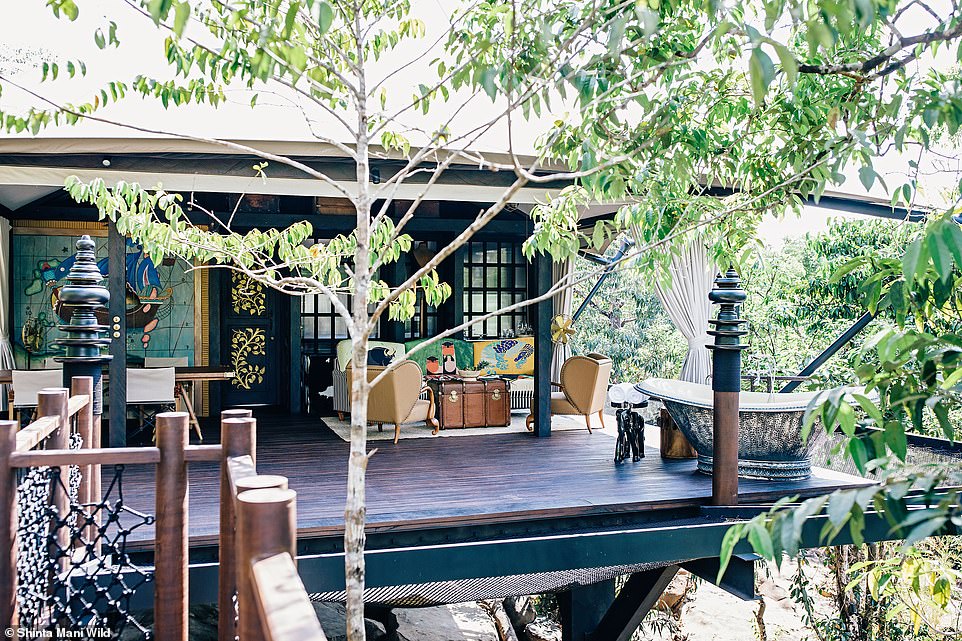 One of the tented rooms at the Shinta Mani Wild resort in Cambodia, which has been described as one of the hottest new openings in Asia 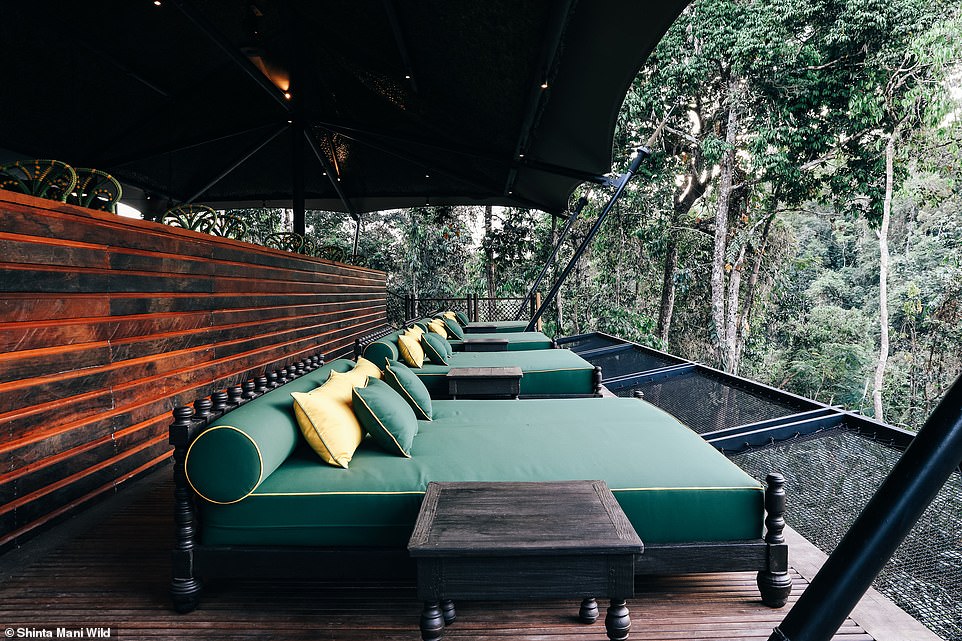 Guests can arrive at the resort by zip-lining in if they choose. It has a total of just 15 rooms 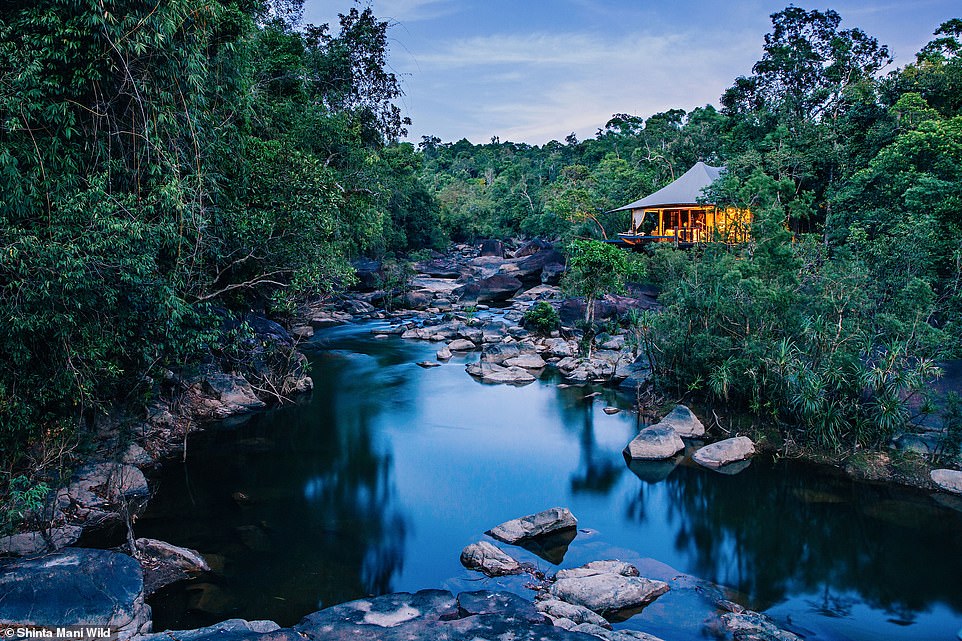 Halfway between Phnom Penh and Cambodia’s south coast, the Shinta Mani Wild has been described as one of the hottest openings in Asia this year.

Guests can arrive by a zip-line, which deposits them next to a waterfall, and it boasts 15 tented rooms, some with roll-top bathtubs on a riverside deck.

Conde Nast Traveller noted: ‘Suddenly there is a very big reason to stay in Cambodia after seeing the temples at Angkor.’ 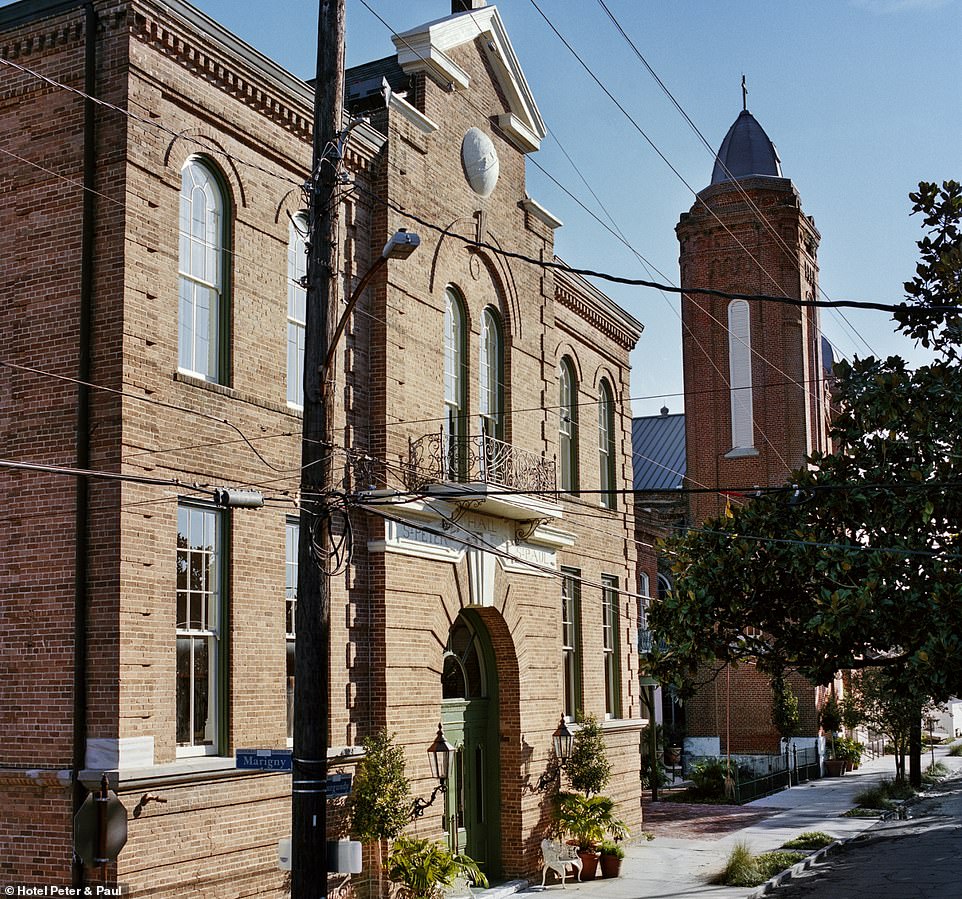 The exterior of Hotel Peter & Paul in New Orleans. The building was formerly a 19th-century Catholic Church 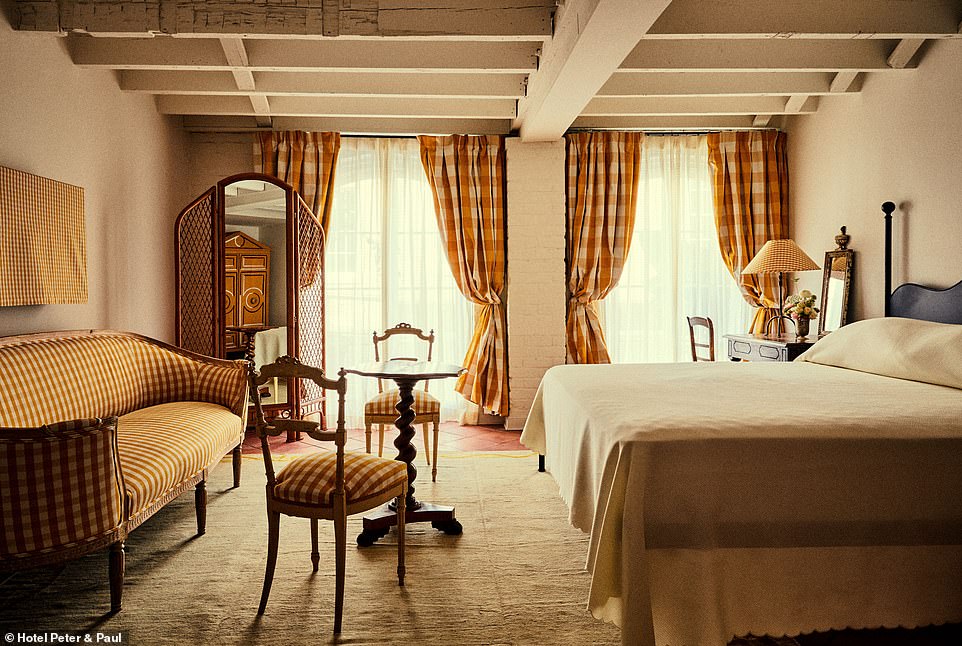 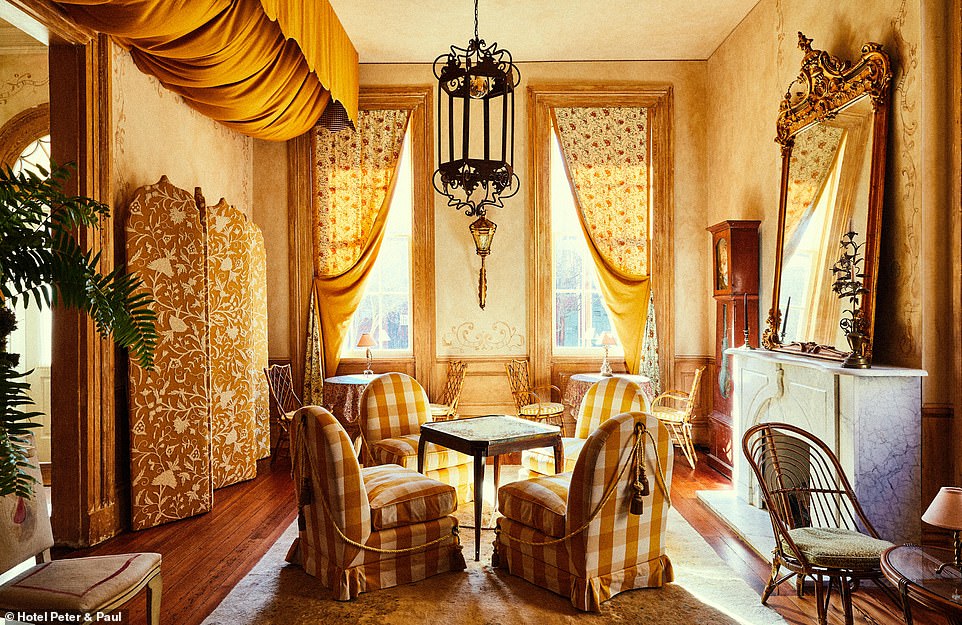 The judges noted the smell of gardenias in the foyer. The interior design comes courtesy of Ash NYC

Hotel Peter & Paul is a former 19th-century Catholic Church in New Orleans that has been revived by design team Ash NYC.

The judges were impressed with the hotel’s bright and airy colour scheme, which includes a canary-yellow check-in desk and a foyer that smells of gardenias.

They said: ‘Of all the boutique hotels that have landed here over the past few years, none get into the bones of the city like this one.’ 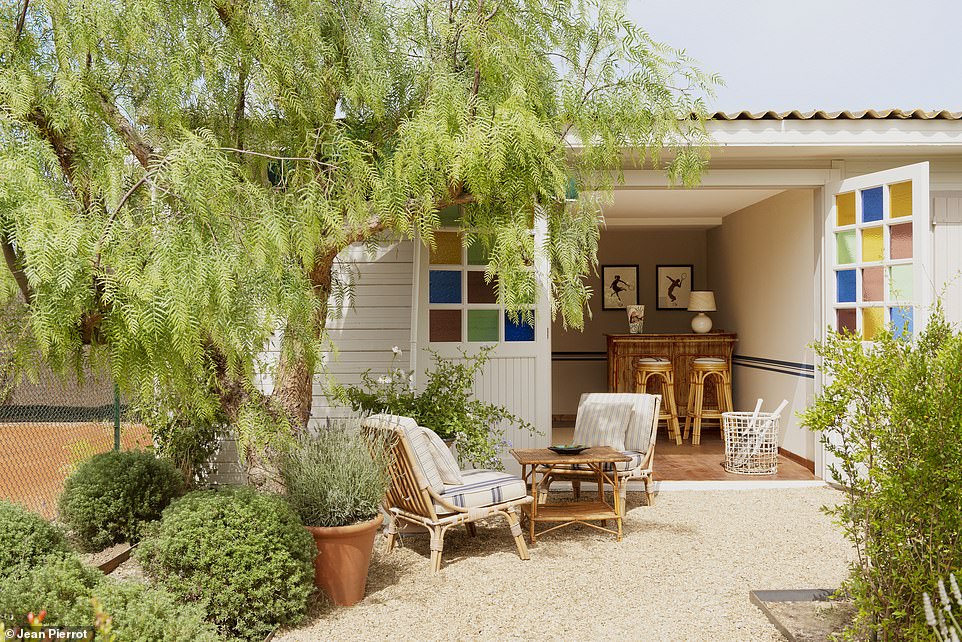 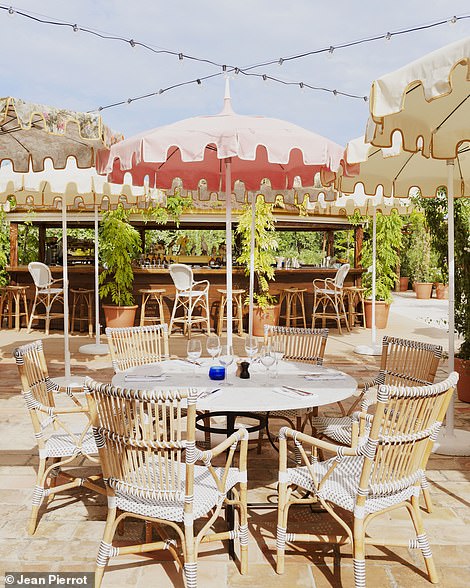 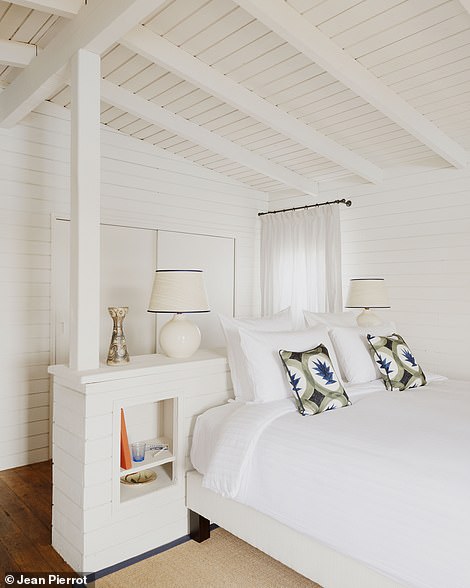 Conde Nast Traveller describes the hotel as cute, cosy and charming. The cabins are filled with old pictures and vintage furniture

Tucked behind St Tropez’s sand dunes, Epi 1959 first opened in the late 1950s and was a popular destination before fading into the limelight.

It re-opened last year and boasts 10 white-washed cabins that are filled with old pictures and vintage furniture. 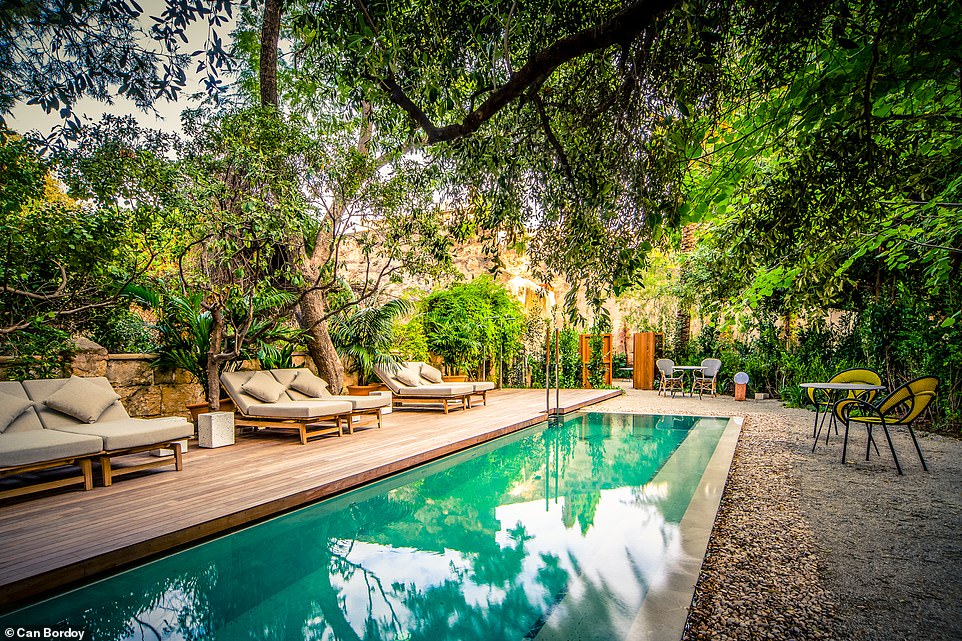 Can Bordoy is located in the Majorcan capital, Palma, in what was once a school run by nuns. Pictured is the hotel’s stunning pool 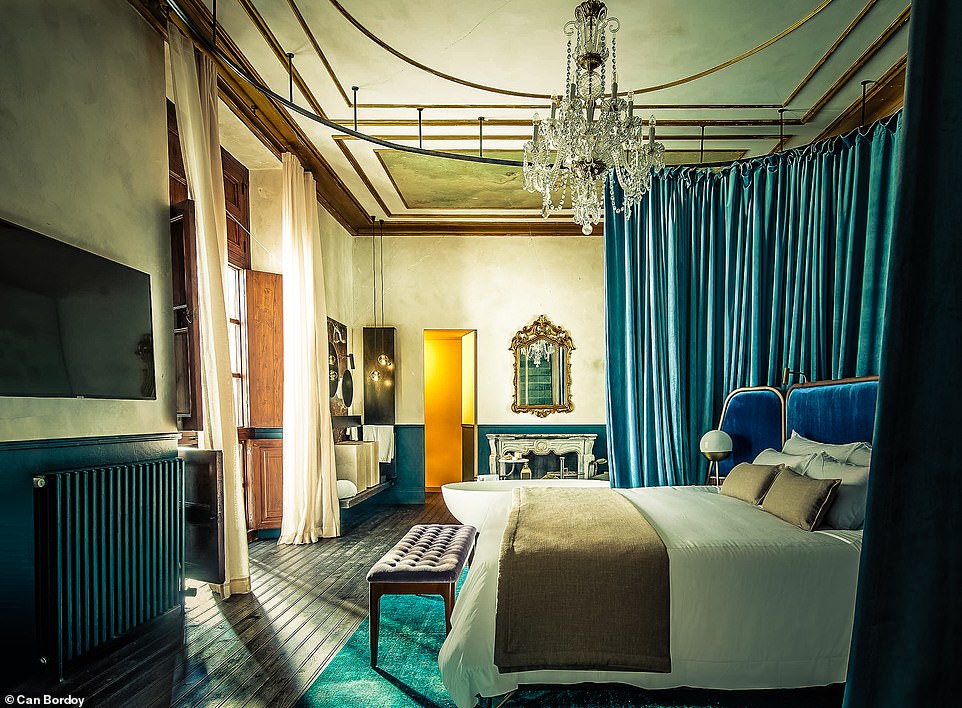 Located inside what was once a private family home and then a school run by nuns, Can Bordoy is located in the Majorcan capital, Palma.

Can Bordoy, in the Majorcan capital, Palma, has been a private family home and a school run by nuns.

Now it’s a stunning boutique hotel with a shady courtyard, a long, stone bar and a living room with ‘beautiful creeping vines across the ceiling that connects to a dining room and a library with views out to the back’.

The judges said: ‘Among the crush of boutique offerings in medieval Palma, Can Bordoy captures the true heart of the place in a way worthy of the moment.’ 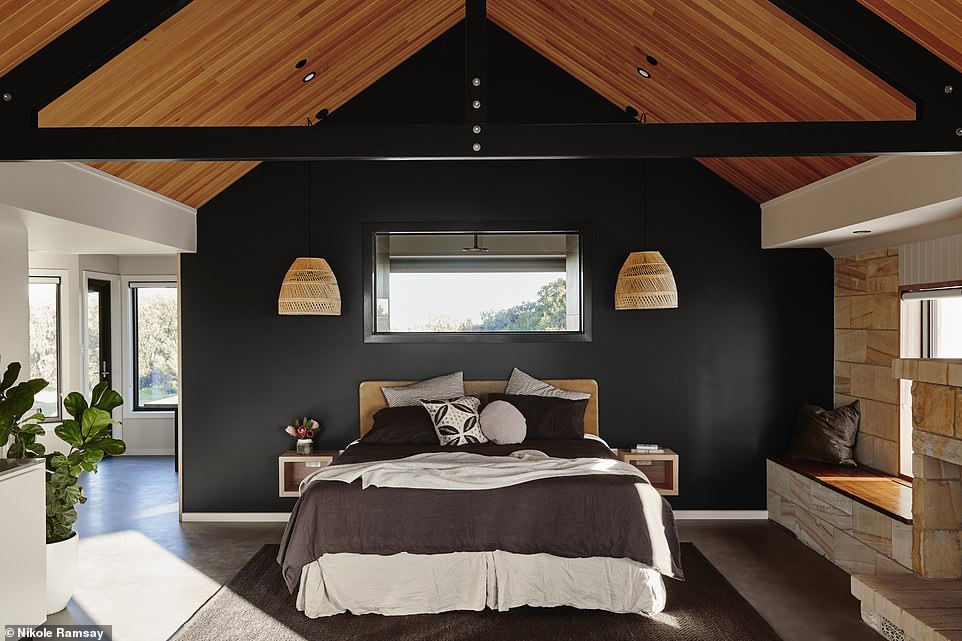 One of the seven rooms inside the Lon Retreat in Victoria, one of three Australian properties to make the hot list 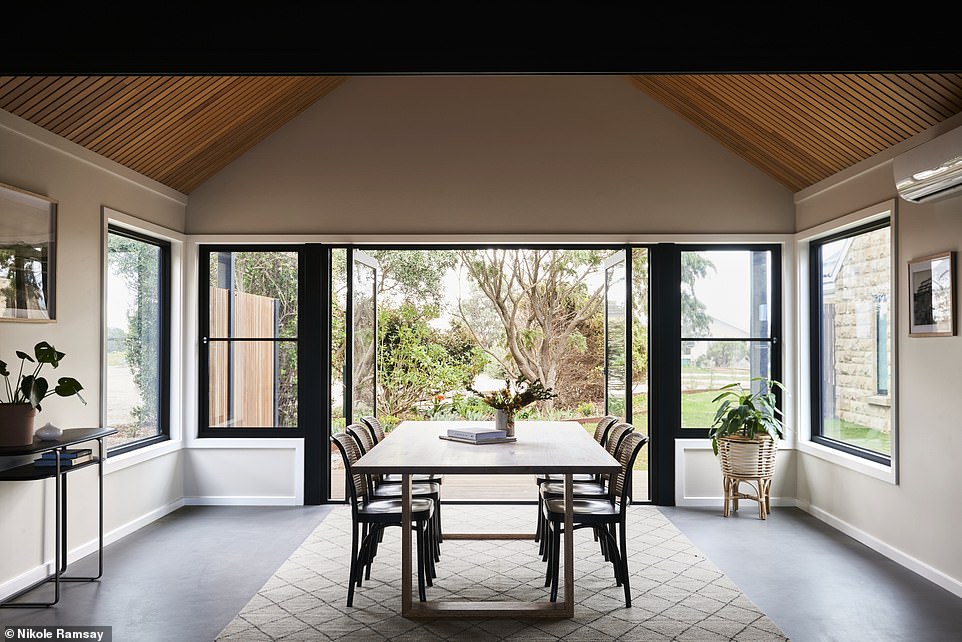 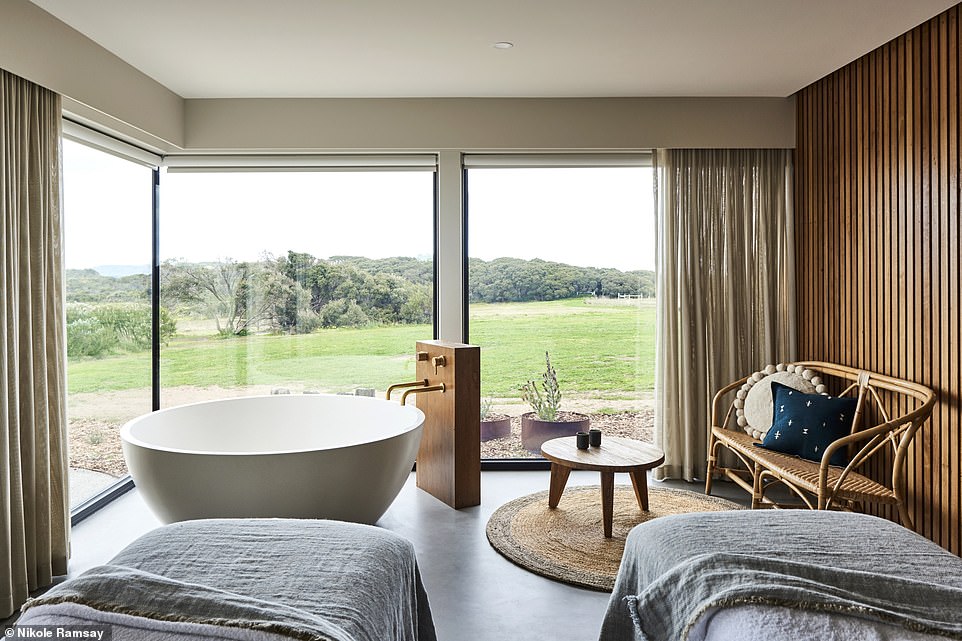 The Lon Retreat is a family property set on 200 lush acres on the Bellarine Peninsula near Melbourne.

It has just seven rooms, but Conde Nast Traveller notes that each is filled with ‘earth interiors inspired by the surrounding landscape’.

The judges added: ‘Lon is a place to do everything, including rambling without a map, or nothing at all: stargazing into the inky southern skies or watching the clouds drift past.’