A condom company has come under fire after releasing a poorly-designed packaging that appeared to encourage rape.

Reddit user wrags23 posted a photo of one of the condoms online earlier this week, saying they were handed out during a college campus safe sex campaign.

The condoms come in a white wrapper and at first inspection seem to proclaim ‘Go further without consent’, a slogan that would condone assault.

Do not: Social media users have been left very confused by the design of this condom wrapper, which at first glance can appear to encourage rape

Important details: The message appears to read ‘Go further without consent’, one Twitter user pointed out, but it is preceded by the drawing of a donut that completely changes its meaning

Backlash: Once the donut is taken into account, the message is an anti-rape slogan that translates into ‘Don’t go further without consent’, but many found it easy to miss

But the words are actually preceded by an easy-to-miss drawing of a donut, which changes the meaning of the packaging completely.

However, many social media users couldn’t spot the donut when they first saw the design, and were left very confused when they thought the slogan was encouraging condom users to ignore consent.

‘I actually read that as ‘go further without consent’ wtf, one person tweeted, to which another Twitter user replied: ‘As did 99% of the populous [sic]. Whoever signed off on this is in the 1% that immediately saw the badly designed meaning.’

Confusion: Many social media users couldn’t spot the donut when they first saw the design, and were left very confused when they thought the slogan was encouraging assault

Chiming in: One social media users believes those responsible for the design shouldn’t ‘do anything more complex than stare out a window’ 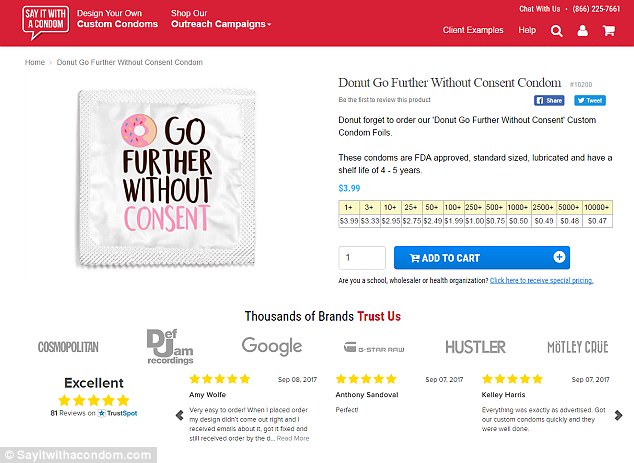 Archive: Now, the donut condoms appear to have been removed from the company’s website, but a cached version shows there were still available last week 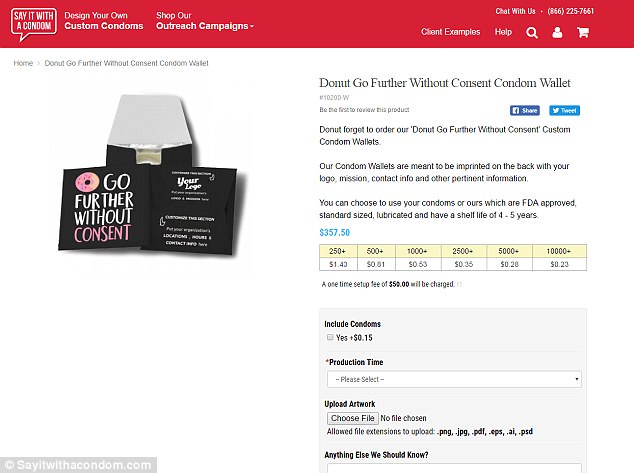 Variety: The design was available both on condom wrappers and on a condom wallet, as shown in this cached version of the company’s website

‘Wait, this is a condom CONDEMNING rape?!’ someone else wrote. ‘I thought it was ENCOURAGING its user! That donut is supposed to be part of the sentence?!’

The condoms come from Say It With A Condom, a Miami Beach, Florida-based company. DailyMail.com has reached out for comment.

Now, the donut condoms appear to have been removed from the company’s website, but a cached version shows there were still available last week.

Since its creation in 2008, Say It With A Condom has launched several ranges of condoms as part of outreach campaigns in favor of abortion rights, LGBT rights and women’s rights.

Amber Rose has worked with the brand on another set of pro-consent condoms in the past, with messages such as ‘My clothes are not my consent’ and ‘My p***y my choice.’